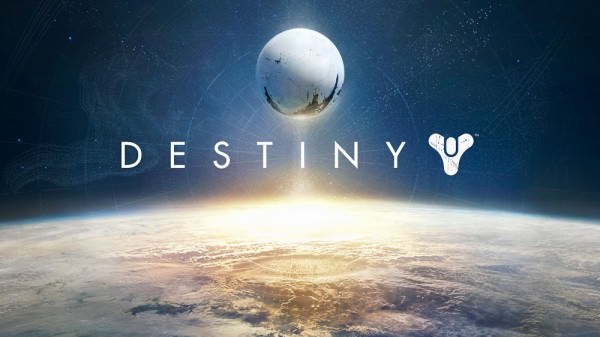 Destiny is the most anticipated game of the year. It has a budget of $500 million and and has earned that same amount shortly after release. Destiny will have a 10 year support plan as Bungie hopes that Destiny will be a universe that people will enjoy. Although it is very promising and has so much potential for a new franchise, is this new universe one that is welcoming, or would want us to stay away?

Long ago, mankind discovered The Traveler. It was a light that brought great change to civilization. Humans were able to spread across space to Mars and Venus. This “Golden Age” did not last forever. The Traveler had an ancient enemy, a Darkness. The Darkness nearly destroyed humanity. Some survived thanks to the Traveler. The Last City was built, where the Guardians, those that wield the Light, must prepare to protect the Traveler, defend the Last City, and become legend.

The concept of the story was interesting. Many parts seemed familiar to other stories. Nevertheless, Destiny has a strong background to start itself with. Yet, despite that, it does not follow through completely as you play through the missions. The story itself does not have many characters involved. Not much background is provided with the characters presented. The Guardians, the character you play as, is simply a nameless soldier. There was not many memorable characters as well, not even a memorable antagonist. The story is not presented well or even noticeable during the missions.  At times you forget why you are exploring. Yet, at the end, it is clear that this was all just an introduction to the universe of Destiny, instead of an actual story. 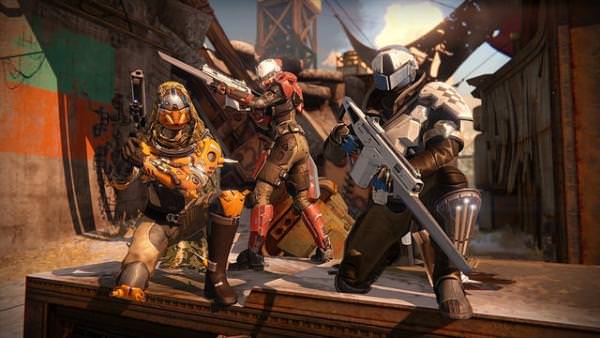 The Guardians of Earth

The role you play as is a Guardian. As mentioned earlier, a Guardian is simply a nameless soldier. Not much emotion is shown from a Guardian, or anything noteworthy. But, you get to create your Guardian yourself, using a decent character creation suite. Three races and three main classes can be chosen, which gives players more choice. Customizations in armor gives more choice. This can make your Guardian’s bland features forgivable, as you decide what to do with your character as if it was an RPG.

The Ghost is the next main character. The Ghosts are an artificial intelligence that originated by the light of the Traveler and assist the Guardians with their journey. Despite having a well known actor playing the voice of the Ghost that accompanies you, the Ghost is not very interesting and can even be boring at times. This is slightly forgivable when you realize that it is just an emotionless robot. It is only useful during missions and can help light up dark areas.

The remaining characters are not really notable. There is a decent variety of enemies in Destiny, primarily featuring a certain kind in each world. They all look very interesting and are fun to kill. Not many differences are seen in their behavior until you are halfway through the story. There is also not much background for the enemies in this game, unless you look up the cards you earn from defeating them. 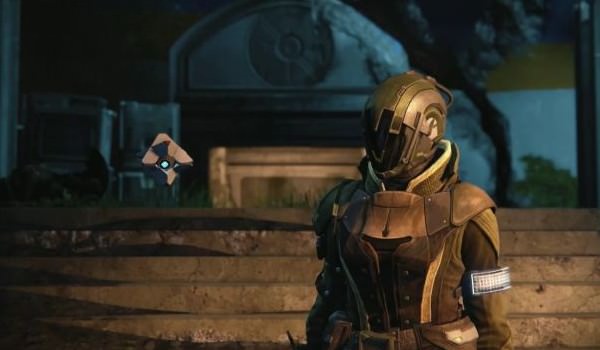 Friends until the end

One thing that Destiny does excellent with is its presentation. The graphics in this game are incredible, even on the older consoles. Locations are well detailed and have variety to the point that it feels immersive just by exploring each location. Playable worlds includes Earth, the Moon Venus, and Mars. How each location is created and portrayed is greatly realistic and believable. The diversity in each world is not very vast, but acceptable. There is also The Tower, which is a hub where players can meet, shop for weapons and armor, meet factions, and acquire bounties. The whole location looks very nice and vibrant, with different parts looking distinct. But the players give more life to it. More players in here would have been preferable.

Your Guardian can be equipped with different armor, that will slightly change the overall appearance. Once you get to level 20, you can unlock color “shaders” to change the color of your Guardian. The three types of Guardians are well detailed and interesting to play as. The Ghost has a decent appearance. But not many of the other characters in the game appear interesting, especially the immobile in The Tower. Characters that you interact with have more detail in the interaction screen than just standing idle. 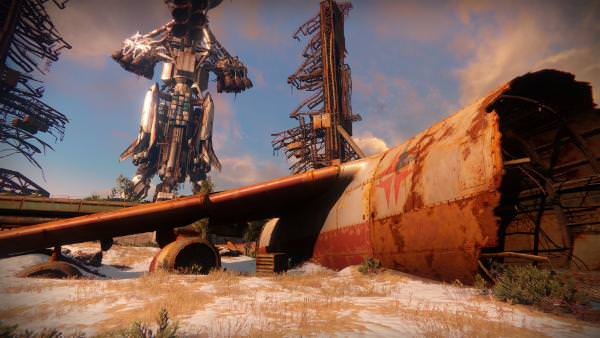 Playing through Destiny is like having a headset give candy to your ears. The audio and music through this whole game is incredible. It feels very much of what you would expect from a sci-fi universe, but with much force. The music is very fitting at every given moment. The music gets more aggressive and stronger while in heated battles and boss fights. It also fits so well when you explore the detailed worlds that you visit.

Your Guardian does not speak much throughout the game. And when he does, it might not even match how you would have created him; it would have been better if the Guardian was a silent protagonist. The Ghost did most of the talking throughout the game. For an emotionless robot, the voice acting was boring enough to fit. But when you realize that it’s a robot, it is slightly, but not fully, forgivable. The voice acting for the other NPCs throughout the Tower was decent enough. 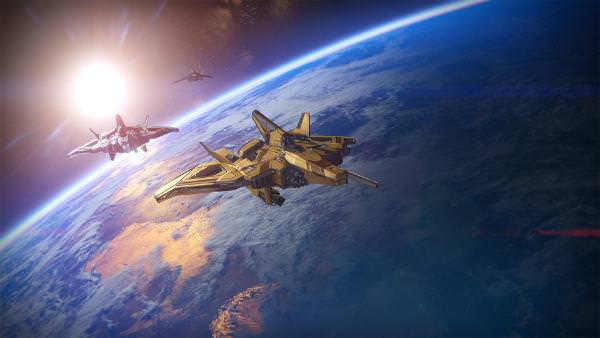 Destiny is made to be an online experience, that is meant to be played with others. The missions can be played alone and exploration can be done alone. But by the time you are half way through the story, it is clear that there are supposed to be others to play with you. Destiny applies MMO elements that attempt to make the game alive with its players. But there are many limitations on this that affect how much players can interact. Besides dancing and looking into your friend’s inventory, there is not much interaction between players in your team. Meeting strangers is even difficult due to the absence of any chat features; you can only talk to people in your team, but not out of your team. This makes it, at times, feel pointless to make Destiny an online only game.

There are a variety of ways to play Destiny. The Story missions will have players go though its story, which isn’t really apparent for a majority of the time. Missions are very repetitive. But the combat and playing with friends can make this forgettable. Once you are introduced in each location and play far enough, you will unlock the Patrol mode for each world, which basically lets you freely roam throughout the world. Other players are present while you play in each world. But it feels empty when exploring and the amount of players allowed in the world play a part. There are collectibles to gather, resources to harvest, chests to loot from, random events to take part in, and miniature tasks to be done as well. Overall, there is much to do that can be done on your own.

Strikes are much larger than missions and can be played with two friends or with random people; you cannot play Strikes alone. Strikes generally have you fight through waves of enemies to confront the major boss at the end. This becomes chaotic at time and fun with the combat system. Bosses are ones not featured in the story and have much larger health than regular enemies. This is even more challenging since waves of enemies attack while you fight the actual boss, making Strikes more challenging. Raids, which are being introduced, as I type this, are a six player, friends-only cooperative mission that are much larger, harder, and no clear objective, leaving players to think for themselves.

Destiny is also getting more later on. Bungie plans to constantly bring updates and live events for players to take part in. From what is presented so far, it is very promising and would bring more reasons to come back. 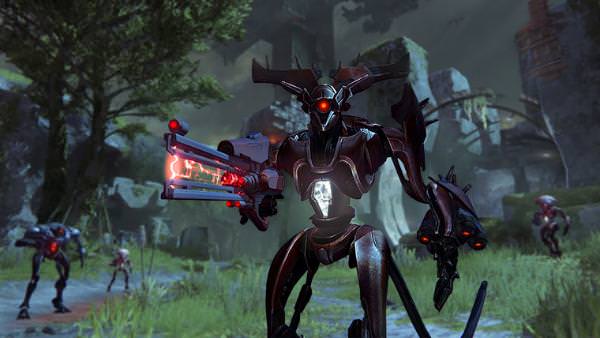 Waves of our little friends

Destiny is a first-person shooter and plays like one. This alone makes Destiny fun to play as it greatly uses the mechanics. But the RPG elements in the available classes give so much more variety to the gameplay and keeps it fresh and addicting. Abilities from each class can even be customized and altered for different results, matching different playstyles. Players also have a super meter that, when full, allows you to use a unique super ability; this varies based on your character and can be offensive or defensive, depending on how you prefer to play. While fighting, you can also obtain armor and weapons. This can be dropped by enemies, found in chests, or gained after missions. Vehicles are also use in the game too, featuring a primary vehicle for faster travel and infrequent vehicles with weapons.

The fun of the combat is even brought to further lengths in the Crucible, the competitive online game mode. It consists of maps and game modes like other games.  The maps here are just as impressive to look at as the actual places they are based on. Once matches start, it becomes chaotic quickly and easily grabs attention. 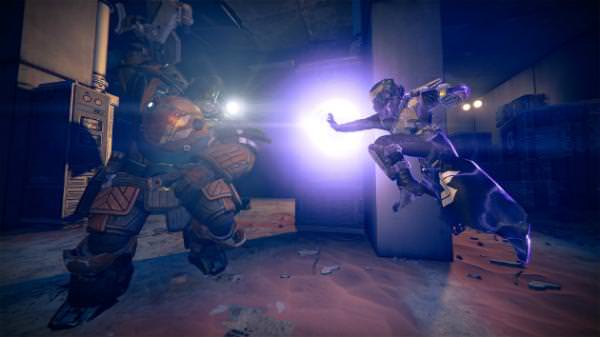 The power of the Warlock

Destiny is not a perfect game. But it is a fun game. Destiny is not a perfect single player game. But it is a great game with friends. Basically, Destiny is like life: it starts off slow and boring at first, but escalates when you are further in and it’s more enjoyable when you have people to be with. Destiny is a very good, promising game that is full of potential. It may not reach the expectations that most have assumed. But with a game that plans to constantly change over time, there is much to look forward to when becoming legend.

For more information on Destiny, check out the Destiny wiki HERE