In this Returnal Tips and Tricks: 10 Things All Players Should Know Guide I’ll be walking you through several things that can make your Returnal experience even better. Returnal is a fantastic rogue-like game, but you can save yourself a lot of time by understanding a couple of basic concepts, and by doing some very specific things.

In Returnal players will make progress before dying and beginning again, often losing much of that progress, but maintaining a varying amount depending on how far they made it, and what was present in their game world on that attempt. Returnal is always shifting, and for that reason it is hard to make an exact walkthrough. However, there are things that hold true no matter what, and those are the things I’ll be focusing on in this guide. First up is Weapon Proficiency. 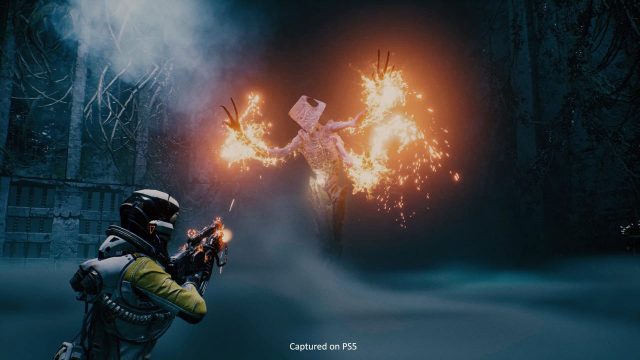 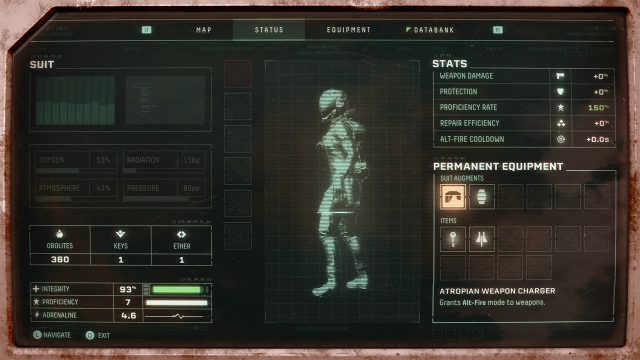 Weapon Proficiency allows you to find better and better Weapons, and without it you will be stuck with very low tier ones that don’t do much damage, and have fewer passive effects. Whenever you die, this resets to 0, so you will need to “farm” it up again or you will have trouble defeating enemies.

Note that once you reach the second biome, you will automatically gain 5 Weapon Proficiency levels by picking up an item there immediately once you arrive. This allows you to rush through the first biome and “catch up” if you don’t want to spend a ton of time farming there and want to get on with the game.

As you gain more and more Weapon Proficiency you will start to find higher tier Weapons, and these will come with varying amounts of passive stats, as well as other Traits that do various things. Not all Weapons are created equal so you really want to pay attention what you are picking up, vs. what you have equipped. Sometimes a higher tier Weapon is just worse. 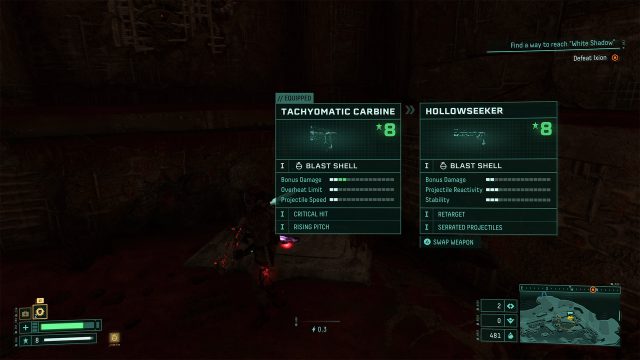 One Example, is that bonus damage seems to be the very best passive bonus you can get on a Weapon. Trading that for a Weapon that has none, but better Stability, is a bad trade off. Always look for more bonus damage when possible.

Additionally, you’ll want to consider the type of weapon it is as well, since some weapons just aren’t that good, like the pistol. I never use a pistol unless it has significant bonus damage compared to what I have. 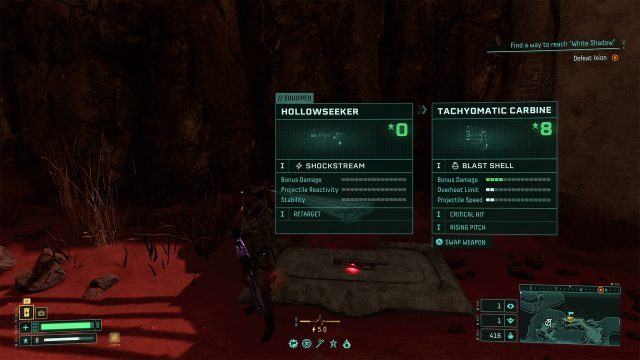 On top of that some weapons simply have better Alt-Fire modes than others, and this can be a determining factor when other things are pretty much equal. Early on test every Alt-Fire you find with each weapon, and use the ones that can kill multiple enemies, like Shockstream and Voidbeam.

When looking for Weapons and Items it’s hard to know what to do early on. There are lots of chests, nodes and keys that are Malignant and will cause a Malfunction if you use them. You can cleanse these with Ether, but you should not do this. 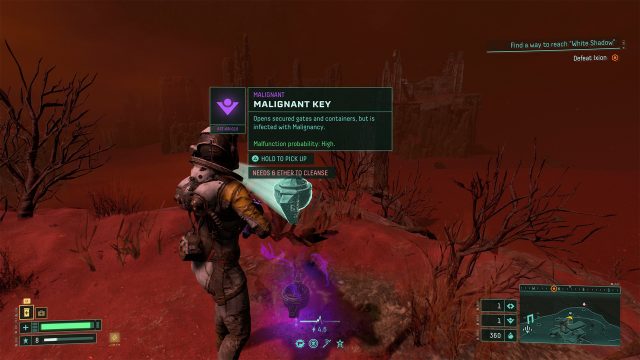 Ether is very hard to come by and it is one of the few things that carry over from each death. Ether is best suited to unlock Artifacts at the beginning of each run. Save your Ether, and plan to avoid things that are Malignant OR plan to use them and then cleanse them with a Nullification Sphere that removes them all when you have one.

Malfunctions can often ruin your entire run, and risking this for a few Obolite or a Key is usually not worth it.

Early on in the game it’s best if you head towards the main objective first, before exploring optional areas. You can use your map to see which direction to head. You want to head through the light blue doors, and try to avoid the “V” shaped ones if possible. You can stick your head in these doors and see what’s inside, but if you don’t recognize it, it’s best to leave them alone. 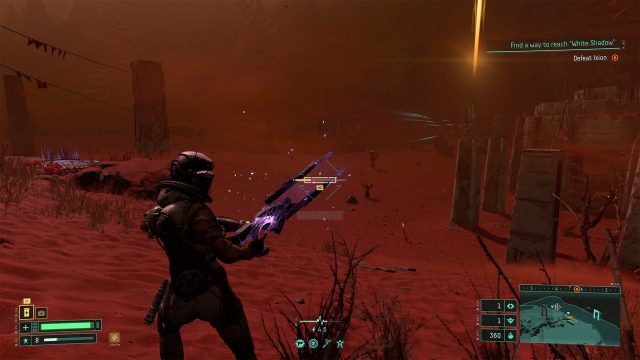 The reason for this is that progressing towards the main objective usually results in you unlocking new equipment that is permanent. This allows you do things like teleport, melee and more. Since the beginning areas are littered with things you will not be able to interact with until you’ve unlocked future equipment, the sooner you get it the faster subsequent attempts will go.

As hard as it is, try to save exploration for subsequent attempts, and not the first time or two in each biome.

Obolite is not super hard to come by, but you can often blow it on useless items that you almost never need. I strongly suggest saving it until you know you can get a significant upgrade, or you can purchase some healing items.

Don’t waste Obolite on “random” items, and don’t spend it on consumables that have limited effect. You never know when and where you might be able to spend it, so hang on to it if there is nothing good to buy. Additionally, be on the look out for Personal Items that say “won’t let you go” as these will prevent you from dying one time when killed, and will heal you a decent amount of health. 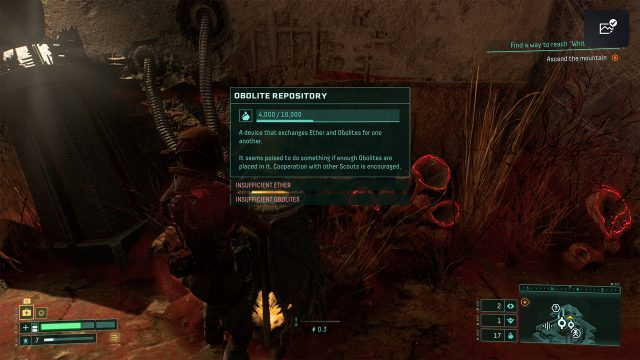 Overload is a huge part of combat, and mastering it will greatly increase your chances of survival. Overload allows you to hit the “fire” button again while reloading in order to end the reload early and begin shooting much sooner. Having less down time between reloads is very important.

Once you gain the Melee Weapon, which is some ways into the first area, you’ll be able to melee from that point onward, even on successive attempts. Melee is extremely powerful and can often 1 or 2 shot most enemies, even the more deadly ones.

Melee has an extremely short cooldown, so it can be spammed even in some circumstances. Note that you will melee in the direction you are facing physically, not the direction you are trying to move. This is important, because until you realize this, you’ll often miss with your Melee attacks. Also note that you must Melee enemies that have a red shield around them, unless you have the “Shieldbreaker” Alt-Fire on your weapon. 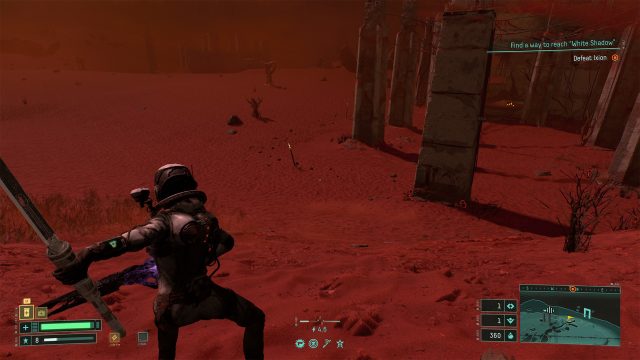 A big part of Returnal is knowing when to engage at range and when to charge into the fray guns blazing. Recognizing these circumstances comes with time, obviously, but there are tells that can help you decipher just what to do.

Any time you open a door that has a very large area or room, you are likely to get swarmed by lots of enemies. It’s not always true, but it is more often than not, and if you have a crappy weapon or you are not feeling confident, some times the best thing you can do is just hang out by the door into this area and pick off enemies. 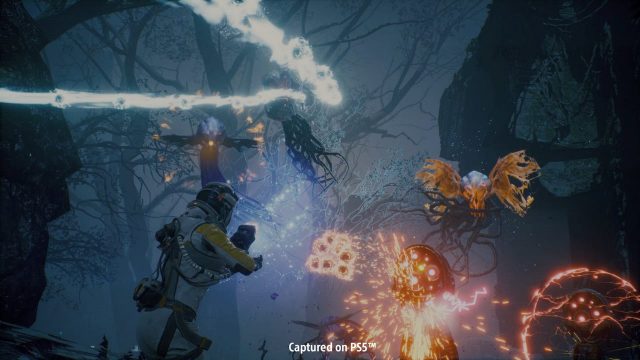 However, there are some rooms that lock behind you and this is not possible, like the rooms that are yellow on your map! Don’t open them unless you really want a challenge!

In these circumstances you are forced to engage, and often the best thing you can do is move quickly from enemy to enemy, dispatching them as rapidly as you can. Never stop Sprinting if possible, as this will make the harder enemies have a tough time keeping up with you, and will help you avoid damage. And don’t forget to use your Melee!

Be on the look out for Breakable Walls. This is one thing you might not even know exists in the game, and you likely won’t figure out unless you are looking specifically for it. They look a little different than most walls, and they can be hard to see, but once you know what to look for they are quite obvious. 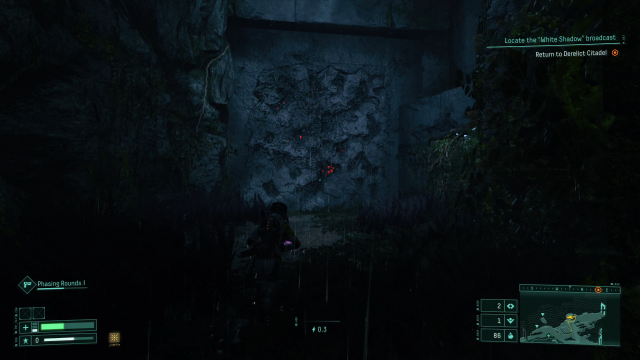 Behind these Walls you will often find Data Cubes, though you can find these in other places as well. Data Cubes unlock more items that can appear in your game world, making things easier for you.

But there’s a catch. You can only carry one of these at a time, and you must deposit them in machines only found after Boss fights in order to save them. This makes it tough to do, because you not only need to do this once, but multiple times, forcing you to face Bosses more than once successfully.

1. Don’t Face Bosses Unless You Are Prepared

This last one is probably pretty obvious, but don’t fight Bosses unless you are ready. That is to say don’t go into the fight with half health, no healing items and a shitty Weapon.

Once you realize where a Boss is located, which isn’t that hard to do, take the time to prepare. That is to say, make sure you’re at full health by finding health items in side rooms. Make sure you’ve got a solid weapon you are comfortable with, and make sure you have at least one healing item ideally. 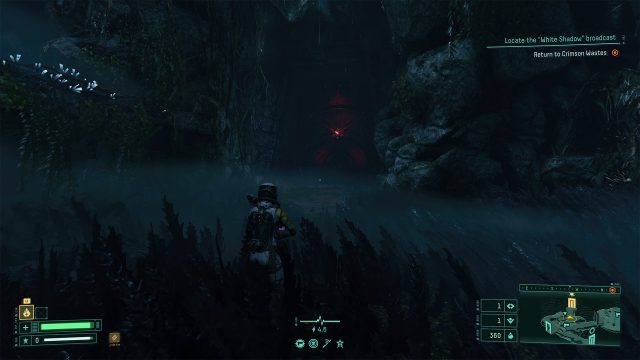 These things will not always be possible, but you should always aim to do them when you can. There is no point in guaranteeing your death after all your hard work, so take some time and give yourself a sporting chance.

I hope you’ve enjoyed these tips and that they’ll make life a bit easier for you. If you have not already, make sure you check out our Review of Returnal to hear our thoughts on why you don’t want to miss out on this game if you have a PS5.