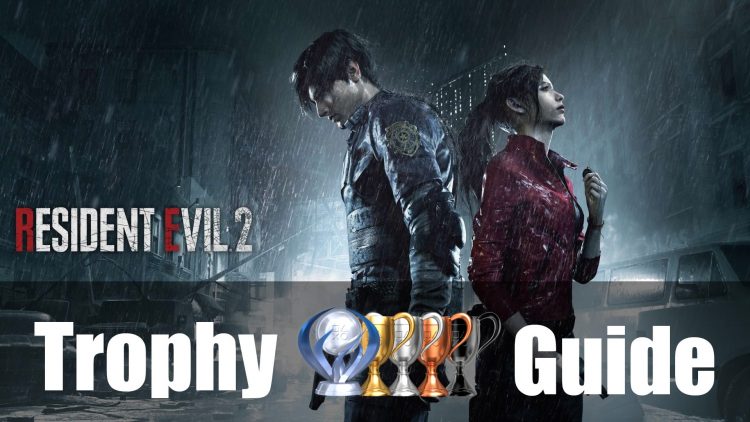 In this Resident Evil 2 Trophy Guide, we’ll be showing you what all the Trophies and Achievements there are in the game. Control Leon S. Kennedy and Claire Redfield in this remake as they shoot their way out of Raccoon City. Resident Evil 2 is a survival horror game developed and published by Capcom which will be released worldwide January 25, 2019 for PC, PlayStation 4, and Xbox One.

Use this Resident Evil trophy guide and roadmap to achieve platinum or 100% the game as we mow down dozens of zombies to collect the 42 trophies.

Welcome to the City of the Dead

Make it to the police station.
Bob and weave to avoid all the zombies to safely reach the R.P.D.

Path to the Goddess

The Lion Statue located in the Main Hall on the second floor solution is:  Lion, Plant, Bird. Solving the puzzle will grant the player the Lion Medallion.

The Unicorn Statue located in the Lounge on the first floor solution is: Pair of Fish, Scorpion, Water Jug. Solving the puzzle will grant the player the Unicorn Medallion.

The Maiden Statue’s solution is Lady, Bow, Snake.  Solving the puzzle will grant the player the Maiden Medallion.

A Great Need for a Shower

Escape from the sewers.

The Basics of Survival

Increase your inventory slots.
Collect the Hip Pouch located in the West Storage Room in R.P.D.

Defeat an enemy with a knife.

Counterattack with a sub-weapon.

Use Wooden Boards to board up a window.

Destroy a Mr. Raccoon.
Can be found in the shooting range under the R.P.D.

Shoot the grenade you fed to an enemy.
Have a grenade in your inventory without other

Kill 3 enemies at once with a sub-weapon.
Gather 3 enemies and toss a grenade at them.

Shoot a zombie dog or a licker out of the air.

Paralyze a licker’s sense of hearing.
Throw a flashbang at a licker to momentarily disable their hearing.

Shoot Tyrant’s hat off his head.

Defeat Stage 2 G using the crane only once.

A Waist of Space

Use only the EMF Visualizer to complete Ada’s gameplay segment

Escape the bedroom within 60 seconds during Sherry’s segment.

With Time to Spare

In The Blink of an Eye

Read all of the files.

Open all of the safes and locks in the game.

Complete Leon’s story on “Standard” or “Hardcore” with an S rank.

Complete Claire’s story on “Standard” or “Hardcore” with an S rank.

Complete the game without using a recovery item.
Self-explanatory; play on the easiest setting.

Clear the game without opening the item box.
Self-explanatory

Take 14000 steps or fewer in one playthrough.