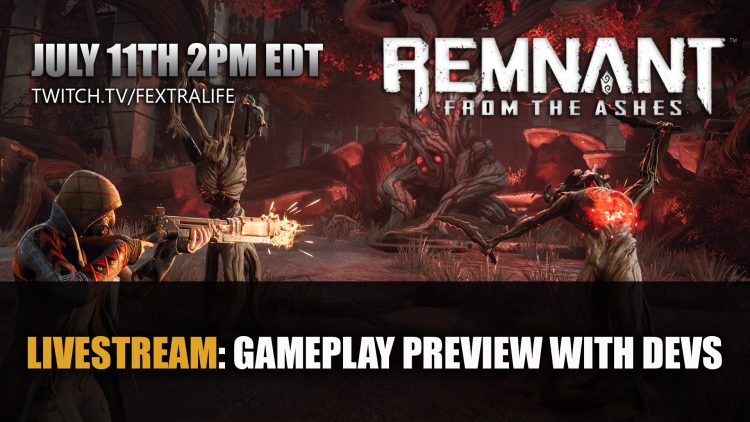 We’ll be livestreaming some gameplay of the upcoming co-op shooter Remnant from the Ashes live with the developers Gunfire Games on July 11th.

Remnant: From the Ashes the third-person shooter was announced at this year’s E3 at the PC Gaming Show. Featuring intense combat, plenty of action and plenty of weapons to choose from. It’s rogue-like features will provide plenty of replayability with it dynamic generation system which bound to keep you on your toes.

If you want to catch us playing live be sure to watch our livestream on Twitch where we will be joining the developer Gunfire Games as we face off against the many enemies in co-op.

To catch the stream be sure to follows us on Twitch, and watch us play:

Simply visit Twitch.tv/Fextralife or you can watch it below here:

Remnant: From the Ashes is releasing on August 20th on Steam, Xbox One, Playstation and Arc. If you want to get your hands on it early you can gain VIP access on August 16th by pre-ordering.

For more news be sure to read next Remnant: From The Ashes Dark Souls Inspired Shooter Gets New Trailer At PC Gaming Show and Remnant: From The Ashes Cyclops Trailer Released. You can also check out Amazon Game Studios Currently Developing A Lord Of The Rings MMORPG and Dauntless New Challenge Trials And Hunt Pass Begins Next Week.