In this Remnant From the Ashes Build Guide, I’m going to be showing you my Silent Slayer Build, which is a Ranged Build that focuses on killing enemies from Stealth, and dealing maximum damage to the Weakspot of enemies. It uses a mix of new items from the Subject 2923 DLC, as well as old, but I’ll show you how to use it at any level effectively, working your way up to its final form. It doesn’t matter if you’re looking for a Beginner Build, or End Game Build, you can use this one regardless.

Remnant From the Ashes Builds: Silent Slayer (One Shot Build)

The Silent Slayer Build operates in a similar manner in and outside of Boss fights by focusing on dealing lots of Weakspot Damage with every shot fired. However, as you make your way through each biome, you’ll be able to pick most enemies off one at a time, preventing yourself from getting overwhelmed in the majority of cases (except for some events).

This is accomplished by reducing the awareness of enemies, using Weapons that are relatively quiet, and by guaranteeing that you’ll Critically Hit any enemy that has not engaged in combat with you. You can hit enemies for nearly 4000 damage per shot with the Crossbow this way, if done properly, often killing most enemies with a single arrow. 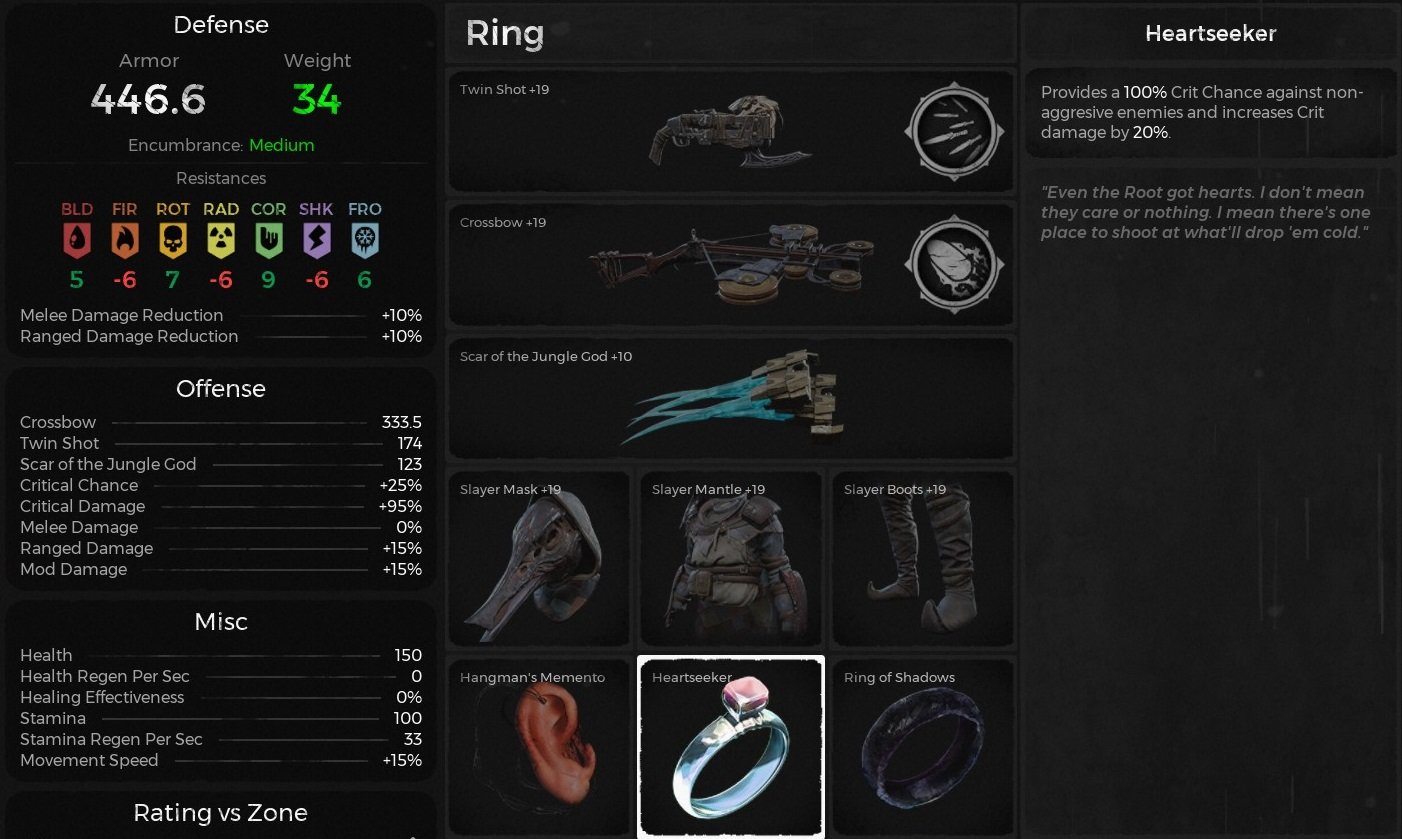 The primary Weapon we use for this Build is the Crossbow, and we do this for a few reasons. First, it only holds 1 arrow in the Mag at a time, allowing us to take advantage of the Slayer Set’s bonus, which increases our damage with the next shot for 10 seconds after a reload. Second, it’s very very quiet, which prevents enemies from becoming aware of your presence. And third, it does very high damage per shot, and has an extremely high Critical Chance at 20%. I like to use the Hot Shot Weapon Mod to further increase damage and set Burning 100% with each arrow.

For my secondary Weapon I like to use the Twin Shot, which was added with the Subject 2923 DLC. It’s very quiet, much like the Crossbow, but holds 2 arrows per Mag. It does fire both with one trigger pull, however, still giving you the benefit of the Slayer Set with every trigger pull. I like to use the Fan of Knives Weapon Mod for this Weapon because you will need it for healing in Boss fights. 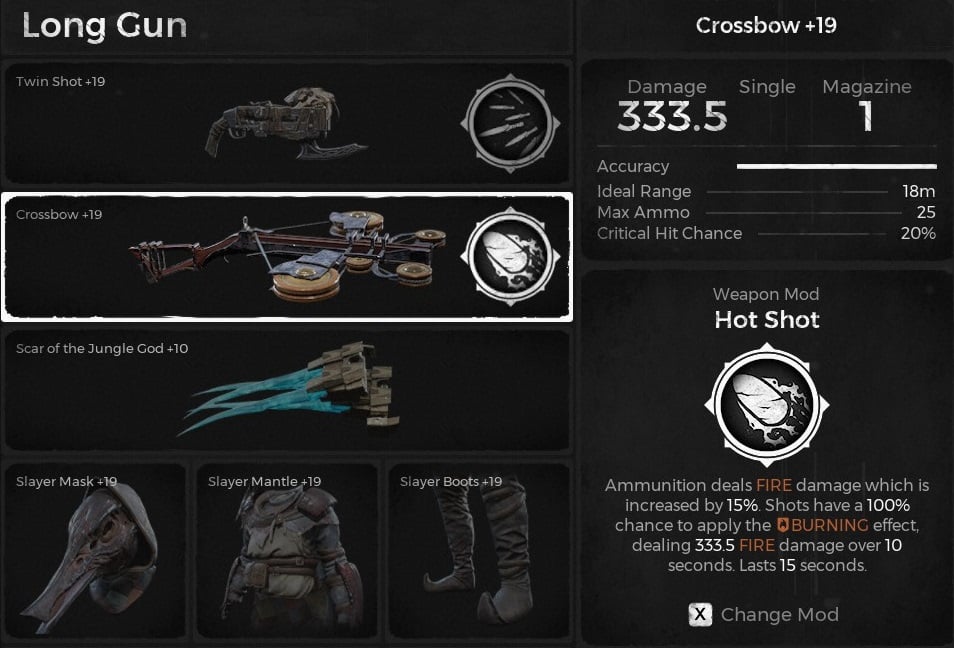 For the Silent Slayer Build we use the Slayer Set, which should come as no surprise. The idea here is that with each arrow we fire, we gain a 30% damage increase with each successive arrow, really boosting DPS. If you’re trying to make a Build that kills enemies in one shot, you’ll either want to use Slayer or Warlord’s, they are simply the highest damage there is. 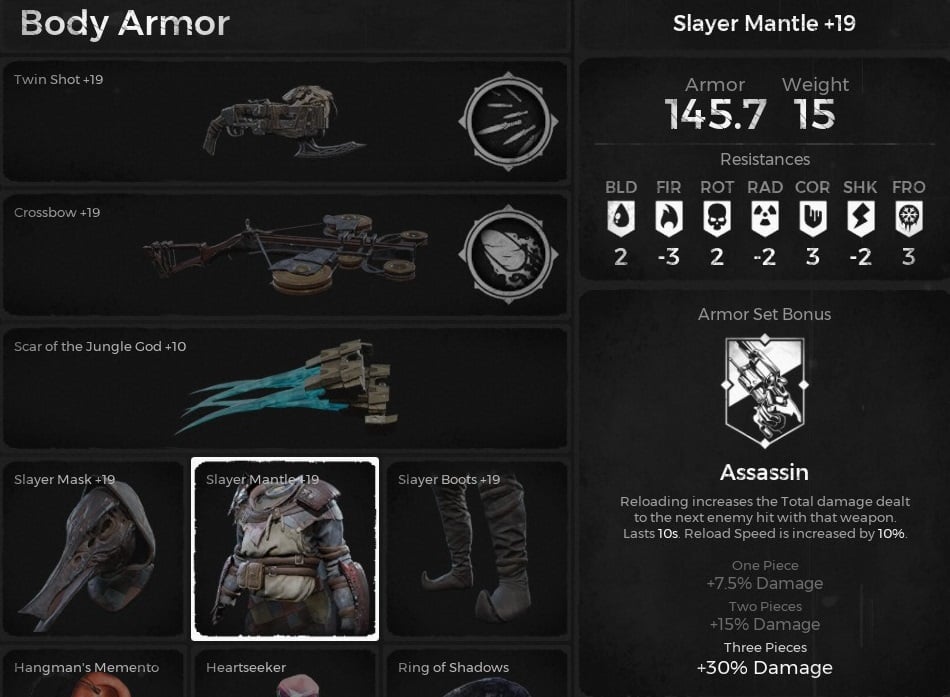 For the Silent Slayer Build I really have two setups here, because being silent doesn’t help you much in Boss fights, so you’ll want to change your Trinkets up before a Boss battle. The following are the two setups I use, one for exploration, and one for Bosses. These setups are the same regardless of game difficulty:

angman’s Memento – This Amulet increases your Weakspot Damage by 50% after killing an enemy, for 10 seconds. This is a massive boost to damage, and if you move quickly, you can kill every enemy you see when buffed with this.

eartseeker – This Ring guarantees a Critical Hit on any enemy that isn’t aware of your presence, and boosts Critical Damage by 20%. This means just about every shot you fire out on the landscape should Crit, which allows you to kill just about anything with one arrow if you hit them in the Weakspot.

ing of Shadows – This Ring reduces enemy Awareness Range by a further 25%, and increases your damage vs. unaware enemies by an additional 15%. This not only helps you move about undetected, but also assists in killing enemies in one or two shots.

azorwire Necklace – This Amulet increases your Bleed Damage by 50%, and increases your Ranged and Melee Damage vs. Bleeding enemies. You’ll need to use your Fan of Knives on the Boss to get best use out of this Necklace, but that should be no problem with this Build.

loodletter’s Insignia – This Ring will allow you to heal from Bleed Damage, which is what will keep you alive during Boss fights. Use Fan of Knives as quick as you can so that you have constant healing over time, and only use your Dragon Hearts in emergencies.

urden of the Follower – You can use Burden of the Follower with no negative effect because you have to reload after every shot, and this allows you to keep your Mods up nearly 100% of the time. You might not need the extra Mod generation though, depending on your Traits, so if you don’t need it use Hunter’s Band instead.

unter’s Band – This Ring will replace the 15% damage from Ring of Shadows with 10%, but does give you an extra 20% Weakspot Damage. It’s a good trade off in Boss fights where you know you’ll be hitting the Weakspot constantly.

uick Hands – Reload Speed is very important to this Build because you reload after every shot you take. If it takes too long to reload then you will not be able to sustain DPS, or take down a target with a second shot if you missed the first before you are hit.

hadow Walker – This Trait allows you to move about with being seen as much by enemies, which really helps you take down things easily with Heartseeker. Guaranteed Crits are nice to have, and this Trait makes them more likely to happen.

ingslayer – This Trait increases your Critical Hit Damage by 25%, which helps to boost your overall DPS since Heartseeker guarantees Crits. You’ll also want this during Boss Fights because you should have around 50% Critical Chance with Executioner.

xecutioner – This Trait will boost your Critical Hit Chance by 25% at max rank, which is exactly what this Build needs. You’ll have a modest Crit Chance with this Build without it, and between this and the Crossbow you’ll be close to 50%.

ind’s Eye – This Trait increases your Ranged Damage by 15%, which applies to all ranged attacks, whether they Critically Hit or not. Every little bit adds up, so you’ll want this one to further boost the damage of each arrow.

isdom – This Trait will increases your damage with your Bleeds and Burning. It also increases the damage you do when using Hot Shot by 10%, which is an added bonus.

Take your time while exploring and try to get kills without being detected. You can make it across entire landscapes and through entire dungeons without ever alarming anyone to your presence if you are careful. If you get in trouble run far away and create distance between you and your targets so that you can pick them off easily.

You can swap out the Crossbow for the Devastator if you wish during Boss fights, but if you do then be sure to put Hot Shot on the Twin Shot in order to keep Burning and Bleeding on the Boss. It’s really up to you, but the Devastator has a longer reload time than the Crossbow, but maintains the benefit from the Slayer Set because it reloads after each trigger pull. 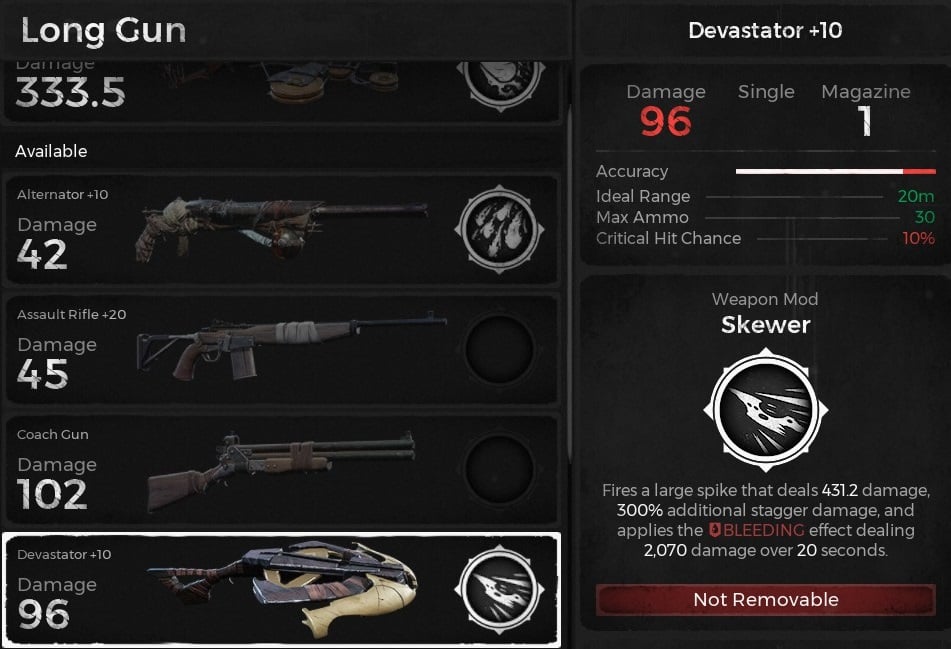 Houndmaster’s Jerky can increase your Crit Damage by 15% for 60 minutes. Since you’ll Crit constantly because of Heartseeker this is a great Consumable to use when playing with this Build. You can purchase these from the Houndmaster on Rhom.