In this Remnant From the Ashes Build Guide, I’m going to be showing you my Radiant Executioner Build, which focuses on high Critical Hit Chance and Fire Rate in order to shred Boss health in seconds. It uses a mix of new items from the Subject 2923 DLC, as well as old, but I’ll show you how to use it at any level effectively, working your way up to its final form. It doesn’t matter if you’re looking for a Beginner Build, or End Game Build, you can use this one regardless. 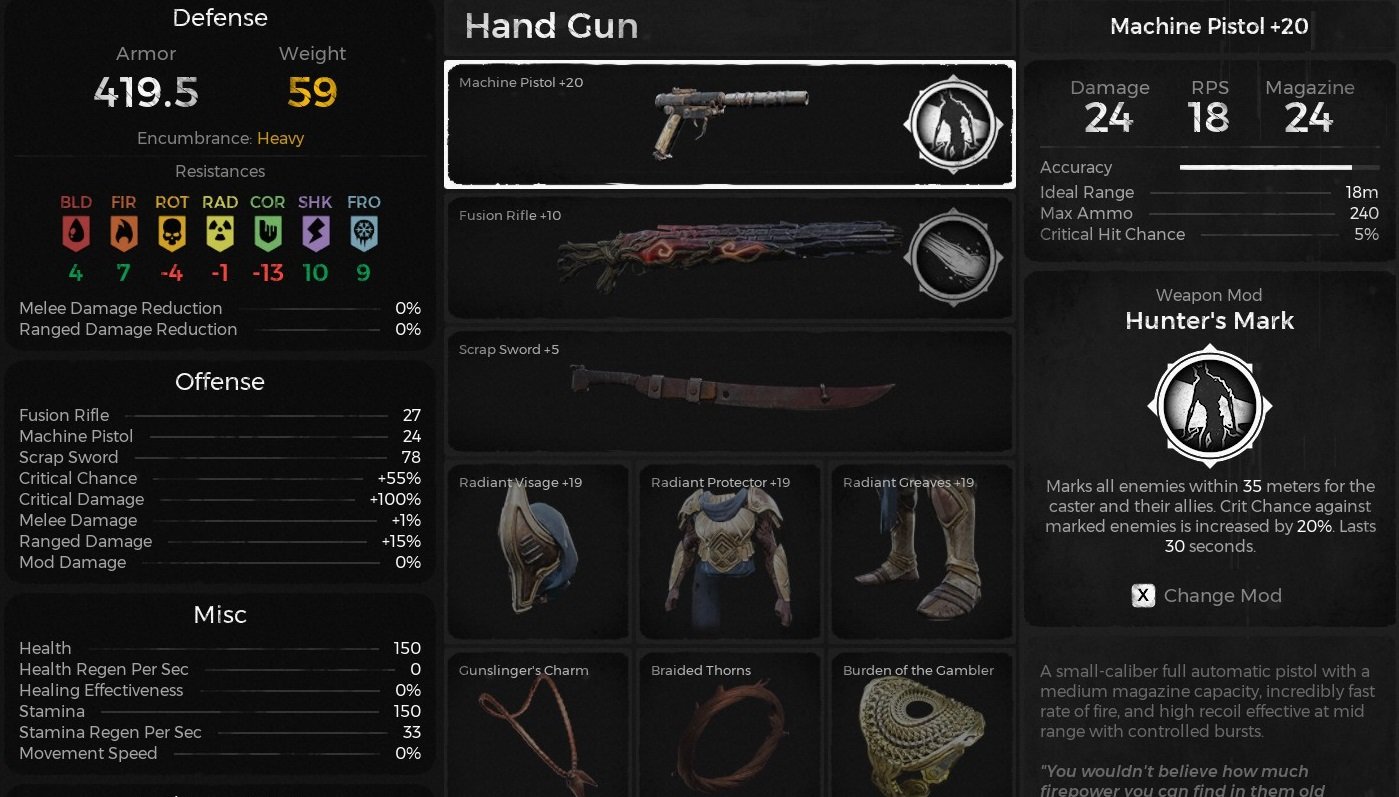 Unbuffed stats of the Radiant Executioner. Your Critical Chance will hit 95% in many cases, and your Critical Hit Damage will increase to 130%.

The most important part of this Build is what weapons to use, because you need a very high Rate of Fire in order to Critically Hit often. This is less important early on when you don’t have the Radiant Set, but it’s best to acclimate yourself to how the Build works at end game anyway. For this reason I suggest getting the Submachine Gun, the Assault Rifle and if you really want the Chicago Typewriter early on. The Submachine Gun can be found in Ward 13, and the Assault Rifle and Chicago Typewriter can both be found on Earth, so you can get all of these pretty fast.

I like to use the Hunter’s Mark Weapon Mod on the Assault Rifle or Chicago Typewriter since you’ll be using one of those two Weapons the most early on, and having increased Critical Chance works well for this Build. However, if you have the Fusion Rifle then you’ll want to put this on your Submachine Gun or Machine Pistol. Additionally, you can use Fan of Knives as well to set Bleeding on the enemy instead of Hunter’s Mark, if you’re using the Polished Whetstone Amulet. 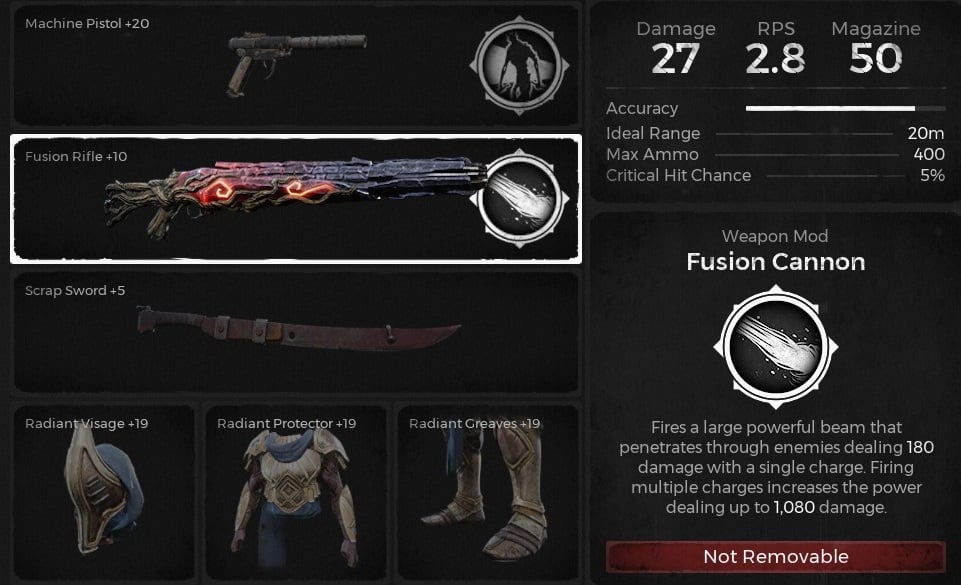 If you have the Subject 2923 DLC you’ll want to get the Fusion Rifle from the final boss there, because it is hands down the best weapon for this Build, and has an excellent Modification that can rip huge chunks of Health off Bosses and one shot tough enemies. The high Fire Rate we have helps us speed the gun back up after using its Fusion Cannon, in order to get back up to speed quickly, and then get off another Fusion Cannon burst.

I also like the Machine Pistol found in the DLC, as it also boasts an extremely fast Fire Rate and can deal out a ton of damage in a hurry. Either use this one or the Submachine Gun in your Secondary slot. Your melee weapon is unimportant as you won’t melee often.

The Armor you want to use for this Build early on is the Hunter Set because it increases both Ranged Damage and Weakspot Damage by a significant amount. This is just a great all around Armor Set that works well on any Build. Later on in the game, once you get to Yaesha, you’ll get the Radiant Chest and Leg pieces from a vendor, and get the Radiant Head piece from a Dungeon there. This will give you increased Critical Hit Chance and Critical Damage, as well as Reduced Recoil which helps control full auto weapons more easily. 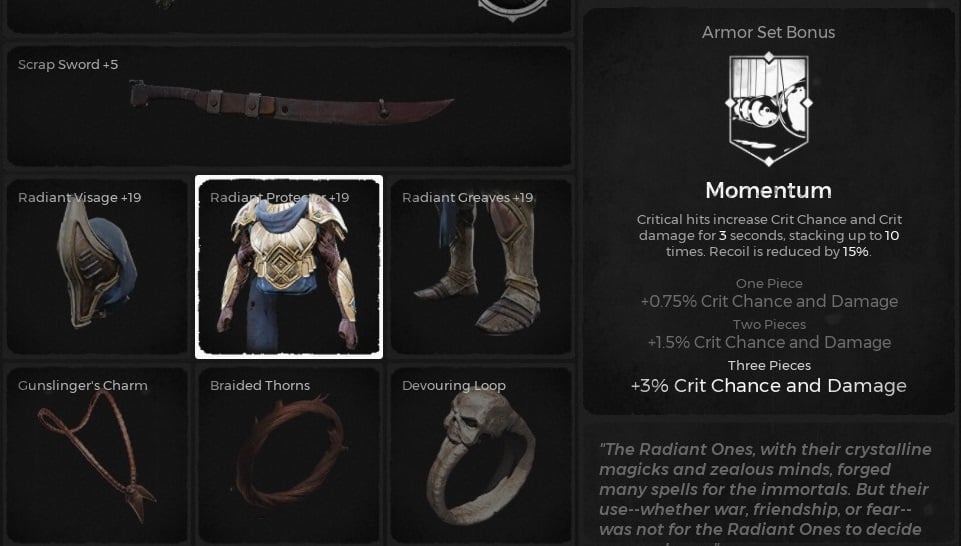 For your Amulet I highly recommend Gunslinger’s Charm because it increases your Fire Rate and Reload Speed. We’ve already discussed why Fire Rate is important, but Reload Speed is needed to minimize the downtime between mags, and you’ll tear through them quickly. Additionally, Momentum only lasts 3 seconds in between Crits, so if your reload takes too long then your buff will wear off and you’ll lose out on damage. By having decent Reload Speed you can ensure this doesn’t happen. You can find this Amulet on Earth, which is an added bonus.

You can use the Polished Whetstone when facing Bosses if you use the Weapon Mod Fan of Knives instead of Hunter’s Mark. This will allow you 15% more Critical Chance if you hit the Boss and 50% more Critical Damage, but is not very good in most other circumstancers.

For Rings there are 4 I can recommend for this Build, and which you use is up to you:

urden of the Gambler – This Ring increases your Critical Hit Chance by 15% and Critical Damage by 25%, but you can no longer deal Weakspot Damage. It’s a great ring for any Crit Build, but I suggest using only on Bosses or when facing enemies that don’t have a Weakspot, or one that is hard to hit. This one can be found on Earth as well, so you can get it really quickly, just don’t use it with the Hunter’s Set or you’ll waste half its bonus.

evouring Loop – This Ring gives you a 6% chance that a Critical Hit will deal 4x the damage. Ideally you’d have a very high Critical Chance before using this Ring, and won’t likely need it until you reach end game and have most of the pieces of this Build. I like to swap this Ring in and out with Burden of the Gambler depending one what Boss I’m facing.

ing of the Mantis – This Ring increases your Fire Rate by 15% and Critical Hit Damage by 20% if you haven’t moved in 1 second. This is an exceptional Ring once you have the Radiant Set, and can really help to boost damage.

I like to shoot for about 80-90% Critical Hit Chance with all buffs up if possible. If you’re going to be using Devouring Loop then you want to try to get to 100% if possible for maximum performance. For this reason I like to pair it with Braided Thorns, however, you can also pair it with Burden of the Gambler if you wish.

xecutioner – This Trait will boost your Critical Hit Chance by 25% at max rank, which is exactly what this Build needs, and why its first on the list. You need to get Critical Hits to make use of Momentum, and this Trait helps you do that.

rigger Happy – This Trait increases your Fire Rate by 20%, which helps you get shots into your target more quickly, increasing the amount of Critical Hits you will deal. Fire Rate and Critical Hit Chance are the two most important Stats for this Build.

ind’s Eye – This Trait increases your Ranged Damage by 15%, which applies to all ranged attacks, whether they Critically Hit or not. This one is just above Kingslayer on my list because you won’t Critically Hit with every shot. You should get this one at the end of your first playthrough.

ingslayer – This Trait increases your Critical Hit Damage by 25%, which helps to boost your overall DPS once you have a high Crit Chance. Not all shots you fire will Crit, especially early on in the game, or this one would be higher on the list.

xploiter – This Trait increases your Weakspot Damage by 20%, and you should be aiming for the Weakspot nearly every shot you fire. Some enemies don’t have Weakspots and others are hard to hit or this one would be higher on the list. Note that you shouldn’t take this Trait if you plan to use Burden of the Gambler.

uick Hands – Reload Speed is important to this Build because you will blow through your magazines quickly, and you don’t want to stop firing any longer than is necessary when this happens. Additionally, the Momentum buff only lasts 3 seconds in between Crits, so you must reload fast to get another Crit to keep your buff maxed out.

andling – This Trait helps you manage the Recoil and Spread of your bullets, which can be challenging with fully automatic Weapons. Between this at max rank, and the Radiant Set it should be a lot easier to hit your target in the Weakspot repeatedly.

pirit – Mod Power Generation is important because you want to use your Mods as often as you can. In Boss fights you can get two or three Fusion Cannon shots off if you’re quick enough, and this Trait helps make that happen.

vocation – This Trait will increase the damage of your Fusion Cannon, and is excellent once you have the Fusion Rifle. This can make your Fusion Cannon hit for an extra 300 Damage at max rank, which is not a small amount.

The Fusion Rifle has very good Fire Rate when at max charges, but these bleed off over time when you aren’t damaging enemies. Make sure to use this weapon when you are fighting regularly, and swap to something else, like the Assault Rifle if not. You want to try to keep it at max charges (5) as often as you can for the best Fire Rate possible, which really boosts DPS.

Try to use the Fusion Cannon Mod on the Fusion Rifle after your first magazine has been spent. This will ensure all your Crit buffs are maxed out and will all but guarantee it hits for a ton of damage. Then quickly fire away on your second mag, and then use another one if necessary. You don’t always have to use the Fusion Cannon, because on some Bosses, hitting the Weakspot faster may actually result in higher damage than using it, so you’ll have to judge for yourself.

The IceFruit consumable, which is part of the Subject 2923 DLC, increases your Critical Hit Chance by 5% for 60 minutes (even after death). This is a great consumable for this Build, since you need all the Critical Hit Chance you can get, and it is relatively cheap at 500 Scrap. Stock up on these if Sebum spawns in your campaign, so that you have plenty to spare. 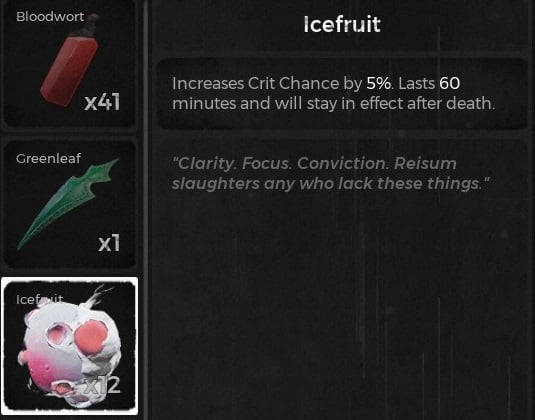 One comment on “Remnant From the Ashes Builds: Radiant Executioner (Crit Build)”