In this Remnant From the Ashes Build Guide, I’m going to be showing you my Explosive Warlord Build, which is a Ranged Build that focuses on Lifesteal and tons of explosive damage to stay alive. It uses a mix of new items from the Subject 2923 DLC, as well as old, but I’ll show you how to use it at any level effectively, working your way up to its final form. It doesn’t matter if you’re looking for a Beginner Build, or End Game Build, you can use this one regardless.

The Explosive Warlord Build uses a combination of explosions and DoTs to kill enemies quickly, all while leeching life via the Warlord’s Armor Set. This set not only boosts damage, but it allows the wearer to regain 3.5% of the damage they deal as Health over 30 seconds. The downside is that you also lose life when triggering this effect, but thankfully we have ways to mitigate that making it much more manageable.

By using the Band of Discord you will gain life gradually when you use a Dragon Heart, which helps to offset all or some of the damage Deathwish does to you. As long as you have no more than 125 Health and you have the Triage Trait maxed out you will take zero damage from Deathwish, making it much more effective than trying to constantly juggle your Health from draining so fast that you die. 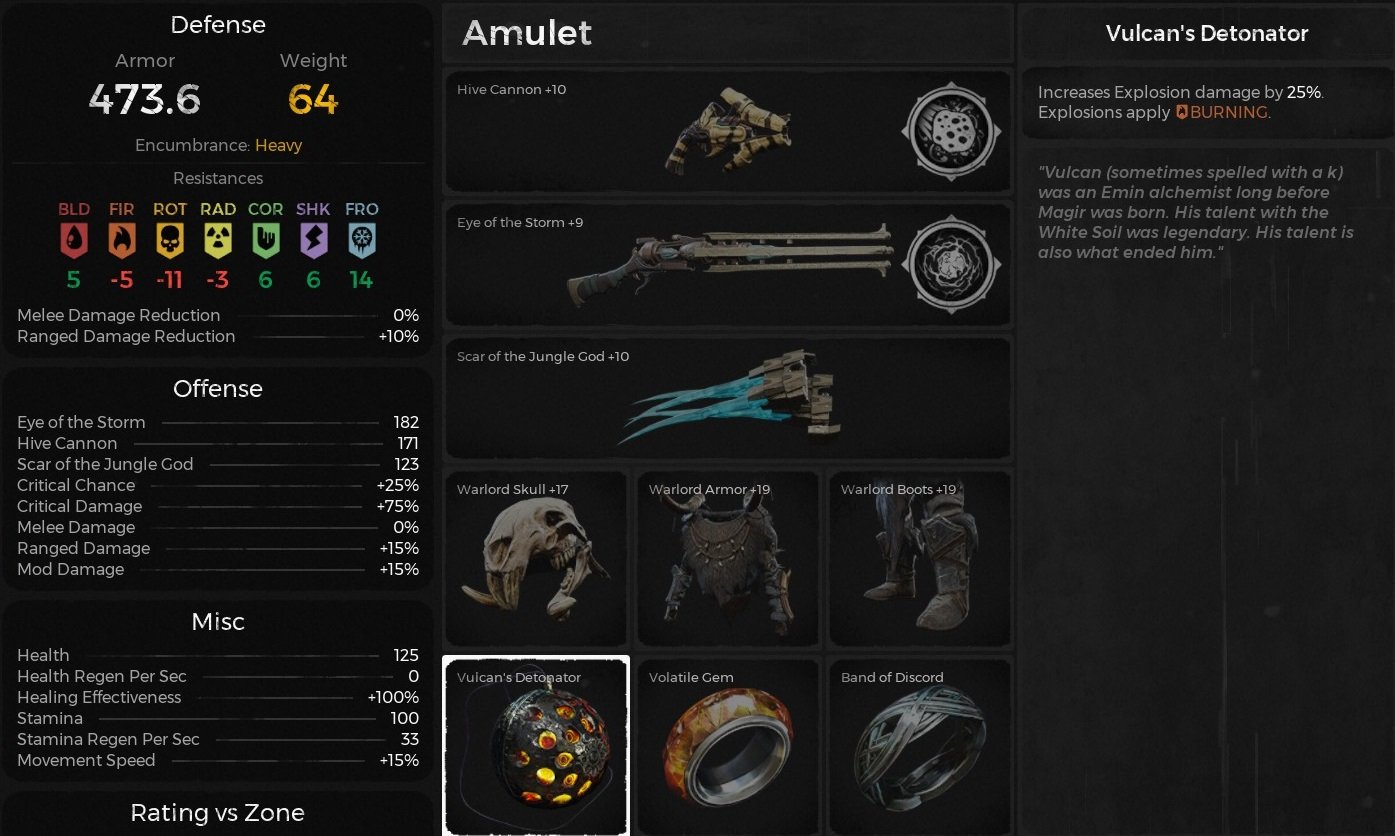 Weapons are a huge part of this Build, and which you use makes a big impact on your success in combat. For the Explosive Warlord Build I like to use the Hive Cannon and Eye of the Storm. The Hive Cannon shoots explosives by default that put the Corroded Status effect on enemies, increasing the damage they take from subsequent attacks. When combined with the Vulcan’s Detonator Amulet, each shot not only sets enemies on fire, but also does 25% more damage. This is just a nasty combination when attacking Bosses, because each subsequent shot increases the damage they will take. Note the Weapon Mod (Hive Shot) also sets enemies on fire when used, making it particularly deadly.

The Eye of the Storm is just a great all around gun and I use it to pick off enemies I’ve already damaged with Hive Cannon, so as to conserve Hive Cannon ammo. Additionally, it does Elemental Damage, just like the Hive Cannon, so is boosted by things that increase Elemental Damage like the Wisdom Trait and Prismatic Diamond Ring. But that’s not all. Its Weapon Mod (Static Field Shot) is also an explosion which is boosted by Vulcan’s Detonator, and also sets the Burning status effect. Together these two weapons are a force to be reckoned with. It doesn’t matter which melee weapon you have, because you will ideally never melee, but you can use Scar of the Jungle God if you want to be able to set a Bleed. 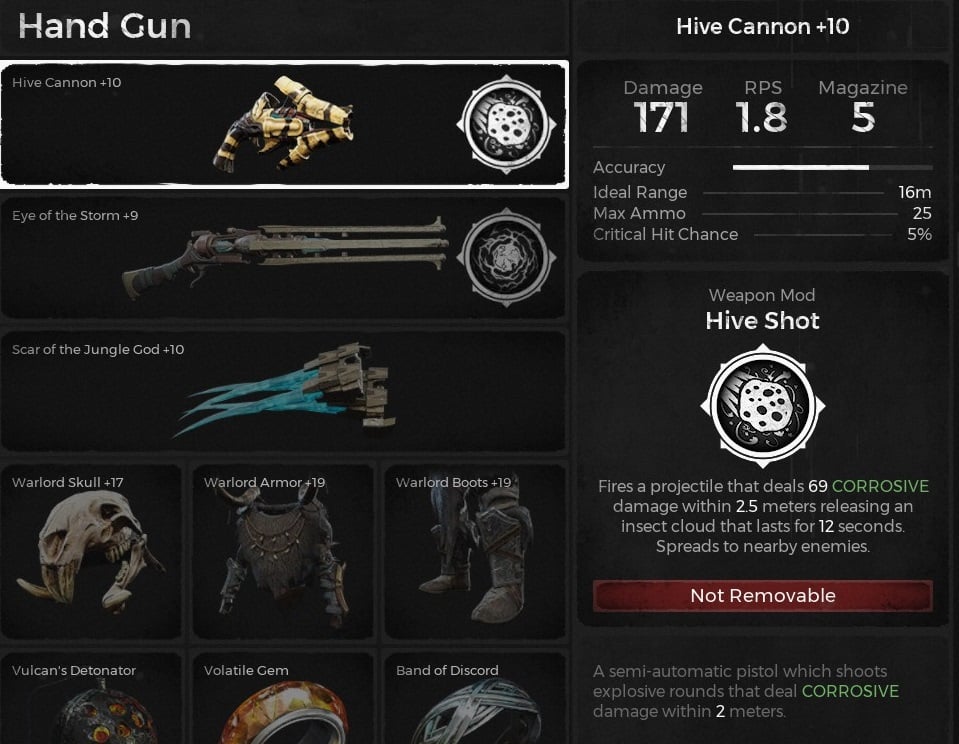 The Armor to use for this Set is Warlord’s Armor, as you might have guessed. It grants you increased damage (40%) and Lifesteal whenever you use a Dragon Heart, but you lose the healing from Dragon Hearts. Thankfully Band of Discord still provides you enough healing to offset the 200% Health drain, but you won’t get a burst heal any longer. However, one shot from your Weapon should fill your Health completely, and you’ll have multiple DoTs up at once, keeping you topped off more often than not. You can use the Hunter Set until you get this one, because the damage bonus from it is not bad either. 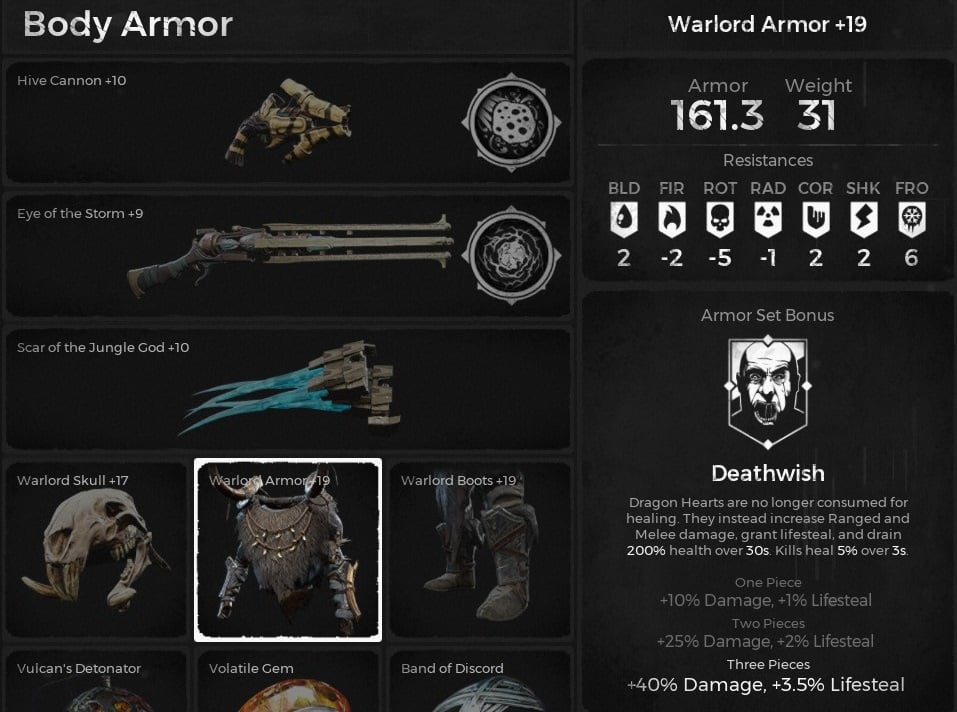 You absolutely need both the Band of Discord and Vulcan’s Detonator to make this Build work properly, so those are not negotiable. However, the second ring slot can be anything you want it to be, and you might change this depending on difficulty. The following is what I’d recommend for that slot:

rismatic Diamond Ring – This Ring increases your Elemental Damage by a further 10%. This means it will boost both the Hive Cannon and Eye of the Storm, your Burning Damage, your damage from Hive Shot and Static Field Shot. It’s just an all around good Ring for this Build.

urden of the Follower – This Ring fits nicely here because both of these Guns are semi-automatic, so the reduction to Fire Rate doesn’t hurt you all that much. However, you tend to have tons of Mod Generation already so it might be a bit overkill after you’ve gotten all the Traits for this Build.

Burden of the Devoted – This Ring will heal your Teammates when you have your Deathwish buff active, which can make you the real MVP of Remnant From the Ashes. If you’re playing in co op, seriously consider using this to make your team’s lives easier.

elerity Stone – This Ring increases your Consumable Speed by 40% and increases Reload Speed and Weapon Swap Speed after using a Consumable. This can help you use your Dragon Hearts faster, and give you some decent bonuses to boot.

lchemist’s Jewel – This Ring will increase your total Armor by 50%, which is a lot with this Build. If you find you are dying too quickly, consider adding this to help you stay alive longer.

olatile Gem – This Ring will create an explosion around you when you use a Dragon Heart, which will be every 30 seconds. What’s really great about this ring is that it heals you for the damage you deal with the explosion, so if you panic Dragon Heart with enemies around you, you will heal to full and they will all be knocked backwards or killed. Great for when you’re overwhelmed by tons of enemies.

riage – This Trait will increase the effectiveness of your healing by 100%, which will apply to both your Dragon Heart and lifeleech. You need this one to prevent yourself from dying when using Deathwish, so max this one out ASAP.

igor – You want to take this Trait to 25 extra Health so that you don’t lose any Health when using Deathwish. Any higher than that and you will take damage when using it, because it is based off your Max Health.

isdom – This Trait will increases your damage with everything you do just about, so make sure you max this one when you get it. It might be the single most effective damage related Trait for this Build.

ind’s Eye – This Trait increases your Ranged Damage by 15%, which applies to all ranged attacks, whether they Critically Hit or not. This one is above Kingslayer on my list because you won’t Critically Hit with every shot. You should get this one at the end of your first playthrough.

uick Hands – Reload Speed is important to this Build because it takes a bit to reload both the Hive Cannon and Eye of the Storm. You need to get this done quickly so you can resume firing in order to keep healing yourself and maintain your Status Effects.

lutton – This Trait increases the speed at which you consume a Dragon Heart by 35%. Combined with the Band of Discord this allows you to use a Dragon Hearts 50% faster than you would normally, which helps mid Boss fights.

emolishionist – This Trait boosts your explosive damage by a further 15%, which applies to your Hive Cannon, Hive Shot and Static Field Shot. All these damage bonuses add up to a ton of damage all said and done, and you’ll see when you try it.

leight of Hand – This Trait allows you to swap weapons faster, which seems like a terrible waste of points. However, you have very little Hive Cannon ammo, and swapping to finish off enemies with Eye of the Storm is the best way to save it. You can make the swap nearly instant with this maxed out.

xecutioner – This Trait will boost your Critical Hit Chance by 25% at max rank, which is exactly what this Build needs. You’ll have low Crit Chance with this Build, so you need to take this one to make sure you have any at all.

ingslayer – This Trait increases your Critical Hit Damage by 25%, which helps to boost your overall DPS. Not all shots you fire will Crit, especially early on in the game, or this one would be higher on the list.

pirit – Mod Power Generation is important because you want to use your Mods as often as you can. In Boss fights you can get tons of Mod Shots off if you’re quick enough, and this Trait helps make that happen.

vocation – This Trait will increase the damage of your Weapon Mods, and is excellent for any Build. Any boost to damage we can get we take, and this one is no exception. It’s not higher up on the list because it only boosts Mods.

atalyst – This Trait increases your Mod Power generation by 40% at max rank when striking enemies with a Status effect. Since this should be Burning and  Corroded with this Build, this really helps against tough enemies and Bosses that you strike often after you’ve hit them a few times with the Hive Cannon.

Make sure that you use a Dragon Heart at the beginning of each combat when possible to buff your damage by 40% before you begin firing. You shouldn’t lose any Health with this setup, so error a bit early rather than a bit late. And keep in mind that you cannot rebuff until the after the 30 seconds are up, so keep an eye on the time and rebuff as soon as possible.

Remember to keep your Health at 125 if possible. This can make things more challenging from Nightmare onward, where things hit tremendously hard, so if you do go over 125 Health be sure to add something like Blood Font to the Build to help manage your Health. 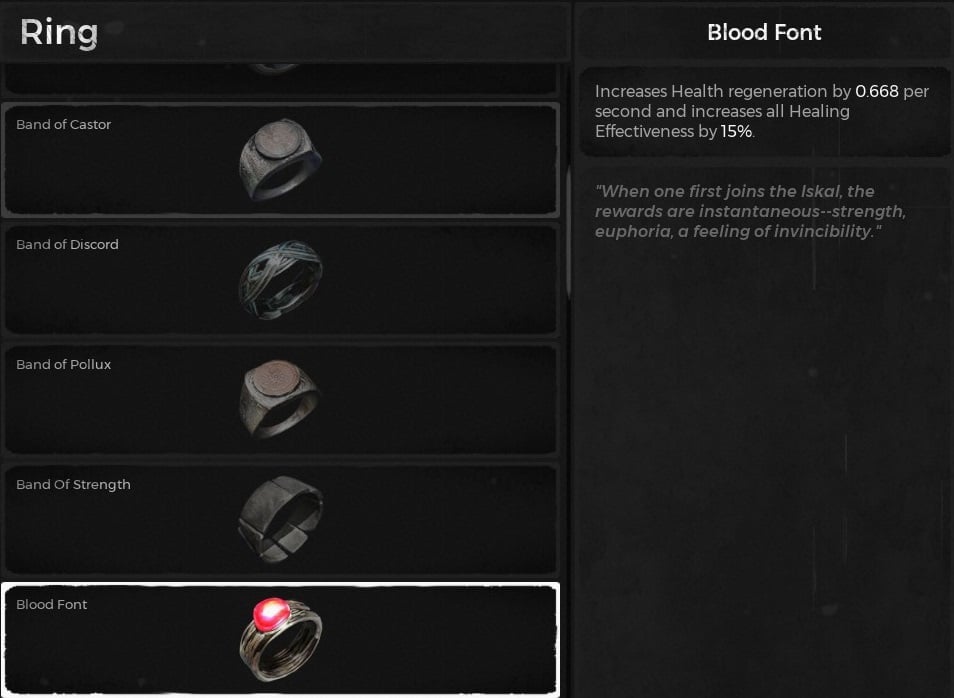 Be careful when you fire your explosions, Hive Cannon included because it is very easy to corrode and set yourself on fire if you are shooting something that is very close to you. Recognize when these situations are happening and back away or swap to the Eye of the Storm when enemies are close up so you don’t hurt yourself.