Praey for the Gods has been in Early Access since January 2019 but it has been a long time since I’ve heard anything about the game. What struck me was how similar it was to Shadow of the Colossus so I had to try it out for myself.

In this Praey for the Gods Impressions: When Shadow of the Colossus Meets Zelda BOTW article, I’m going to run through the survival elements, crafting system, and combat mechanics of the action-adventure survival game. This was developed and published by No Matter Studios. The full version of Praey for the Gods has been available on PC via Steam, Xbox One, PlayStation 4, and PlayStation 5 since December 15, 2021.

Praey For The Gods Impressions: When Shadow Of The Colossus Meets Zelda BOTW

What is Praey for the Gods?

Praey for the Gods is an Open-World, Action-Adventure Survival game that draws inspiration from beloved titles like Shadow of the Colossus and The Legend of Zelda: Breath of the Wild. Shadow of the Colossus is pretty much one of the best action-adventure games in the 2000s. Not only is it widely praised for its visual grandeur and intense musical score, but the combat itself is riveting and captivating. Oftentimes, every colossi fight is a puzzle in itself. The challenge is to identify their corresponding weaknesses and to find ways to hit those spots. These battle designs are well-thought-out so you can’t help but feel in awe while you’re attempting to slay them. 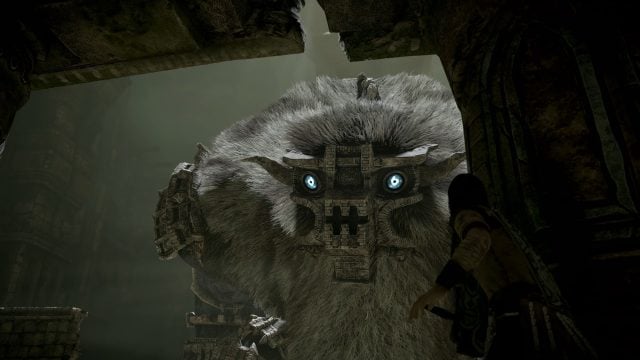 Shadow of the Colossus Gameplay from PlayStation

Praey for the God’s combat style is similar. Depending on the boss encounter, you’re going to have to scour the environment or study the creature to check for ways to make them vulnerable. But the game isn’t all about tackling these mighty gods. You also need to survive the harsh winters, and this is where The Legend of Zelda: Breath of the Wild’s influence comes in. You have to hunt for food and build resistance against the cold to remain alive on top of crafting your gear. 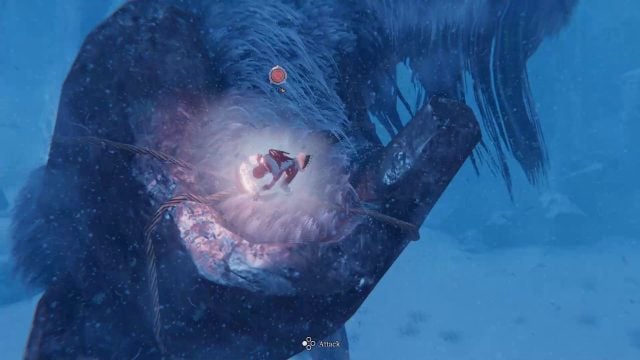 Praey for the Gods Overview and Setting

Praey for the Gods is set on a lonely and abandoned frozen island where the only human being is you. Sure, notes are laying around here and there but you don’t come across the people they refer to or those who’ve written them. You’ll encounter animals to hunt such as rabbits and boars and enemies who look like they’ve been possessed by an otherworldly being.

As the sole hope of mankind, your goals are to determine the root cause behind the persistent, brutal winters, and to put an end to this catastrophe. Doing so will involve going against gods and liberating the sigils that they hold dear in their bodies. Setting forth into this unknown, dangerous world, and without anyone else to rely on but yourself, will you make it out alive? 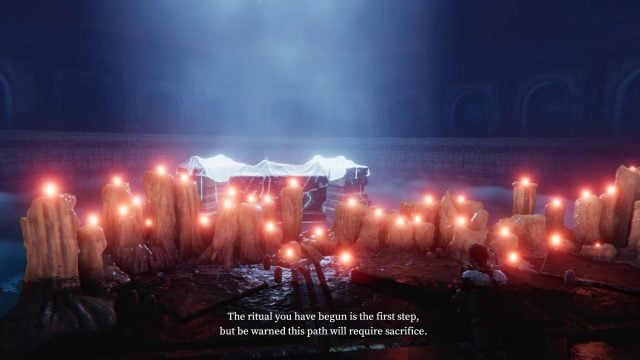 What Praey for the Gods does right is to convey a sense of loneliness because you learn about the travelers who came before you but you never get the chance to meet them. This is exacerbated by how much of an open-world the game really is. Snows can escalate into chilling blizzards that’ll leave you breathless and vulnerable. Inhumans will all of a sudden appear from the ground. Nowhere is safe and you sense how futile it is to make this journey alone.

Praey for the Gods has decent visuals evoking strong emotions of melancholy from the glaciers and cold waters to the island’s vast nothingness and abandoned dungeons. There’s so much to explore given the size of the world. 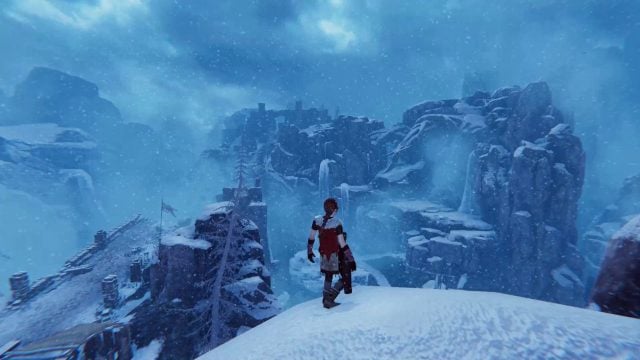 In terms of the audio, you won’t have the same level of quality as SotC but you’ll be treated with the game’s uniquely haunting soundtrack. From the harsh winter breeze as you’re exploring the world to the ominous music when you’re trying to figure out how to climb and defeat a boss. These are cohesive and effectively executed to enhance the feeling of despair that the game strongly showcases. My one concern is the exaggerated sound effects when it comes to fighting against monsters or chopping wood because these are quite unrealistic. As such, it distracts from the immersive experience that Praey for the Gods is trying to achieve.

Praey for the Gods Gameplay Features and Combat

Praey for the Gods utilizes survival elements where you not only have to manage health and stamina, but you also need to be aware of your hunger, exhaustion, and cold resistance levels. Climbing stone structures, gliding from one cliff to the next, and swimming frozen lakes will make you hungry and exhausted. In turn, stamina won’t replenish as fast as intended. 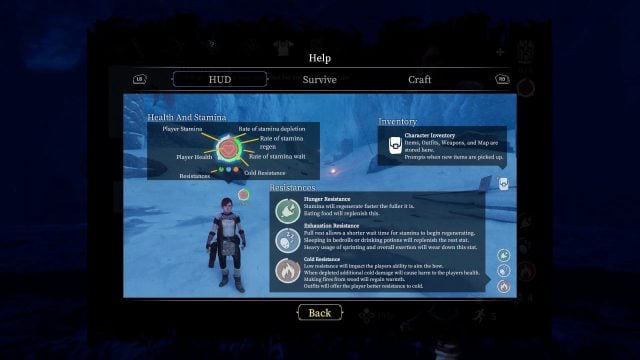 To solve hunger issues and to restore health, you’ll be picking berries and hunting rabbits and boars. Their respective raw meats will have to be cooked at campfires that you can find scattered out in the open or situated in dungeons. To reduce exhaustion, you need to search for bedrolls to sleep in or to consume potions. In order to raise warmth to acceptable levels, you have to craft fires by first acquiring or chopping wood. You can then set this up anywhere. 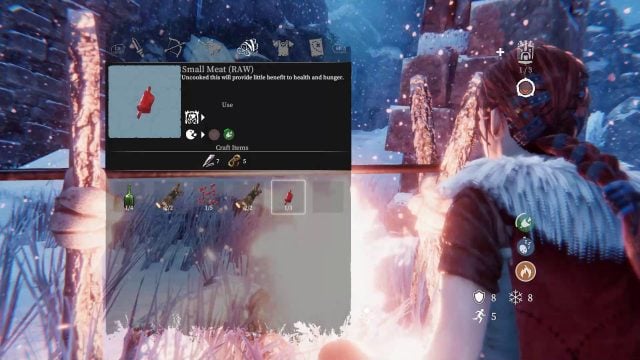 Upgrading your outfit also helps build cold resistance. If this goes down, your health and ability to aim when wielding a bow will be notably impacted. Additionally, totems increase your max health and stamina so you should keep a lookout for these items.

In theory, these Zelda BOTW-like mechanics work well considering the game’s background and atmosphere. However, the execution isn’t smooth so much so that you can do away without it. In fact, there’s a story difficulty setting to turn off these survival elements entirely if you wish. It feels like these were added to not only differentiate Praey for the Gods from SotC, but also to add challenges to the game simply for the sake of it. 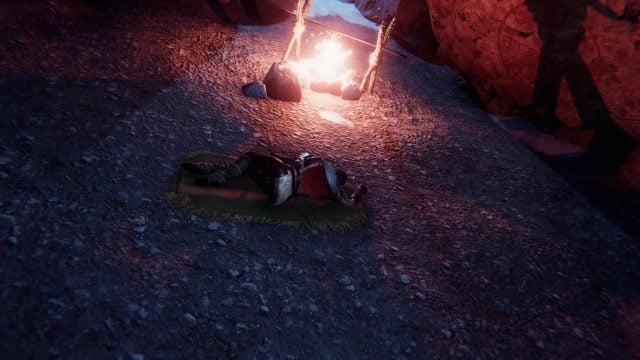 More often than not, I find myself much more invested in the boss fights themselves on top of learning more about the fallen adventurers. Braving the winters is no easy task but it’s not necessary to constantly elevate your resistances to survive. For instance, you can opt to sleep once every few hours and still have enough stamina to climb high mountain peaks. There’s no real incentive to go out of your way to hunt for resources. 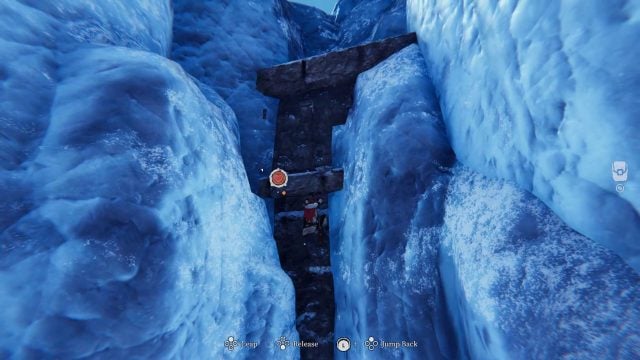 Rather than exploring the island because you want to discover its past and those who came before you, you’re pushed to search for materials to repair your equipment. Gears such as swords, bows, and axes are incredibly delicate. This becomes annoying when you’re in the middle of combat against a minor enemy when suddenly, your weapon glows red indicating that it’s about to break. So you have to step aside for a few minutes to fix it if you have enough materials at hand or to switch to another weapon. 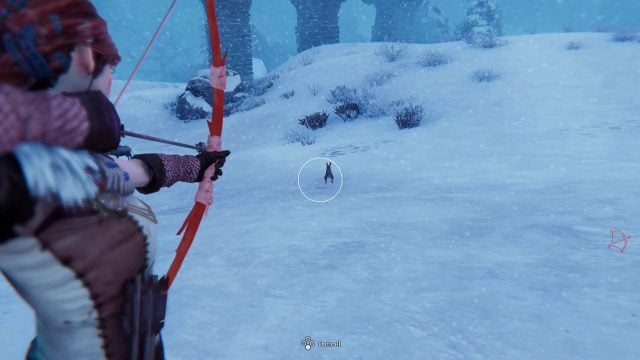 Given how fragile these items are, I found it more efficient to loot them off of enemies rather than crafting them from scratch. Plus, you’d have spare resources to repair the rest of your equipment. I hope that the developers will consider adding some much-needed durability to these in future updates especially in the early game. Overall, even if the crafting system is kept at a minimum, it’s integral to your progression in terms of upgrading gear. 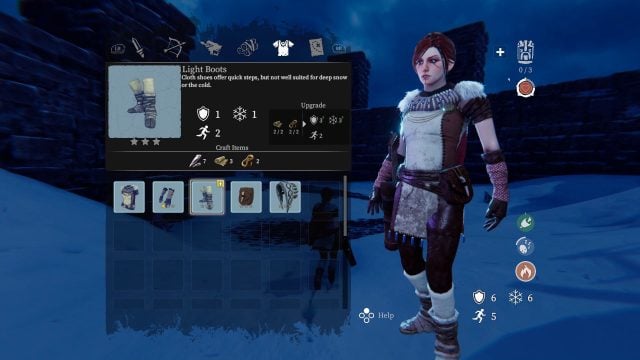 Before we dive into the incredible boss designs and their subsequent combat mechanics, let’s first talk about the encounters against minor enemies. While you’re exploring this desolate world, you’ll come across hostile creatures like undead soldiers, armored champions, and spirits. You’ll have the option to avoid the fight entirely or to engage them in combat. As with most games, killing them is a good way to acquire additional equipment and resources. But the problem is the unnatural feeling that comes with the actual encounter. 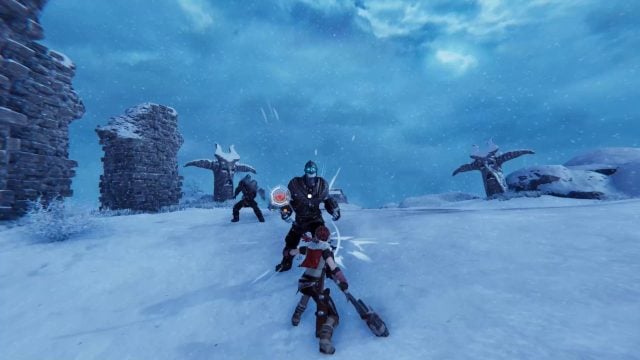 Not all of the controls register right away so sometimes, you have to keep spamming the attack button to successfully hit your targets. This becomes worse when the controller randomly disconnects from the game so you have to restart it as a workaround.

Furthermore, your weapons seem to be made out of flimsy cardboard material, which means that they don’t have much weight necessary to deal enough damage. I also don’t recommend wielding a bow because they don’t work as intended. Imagine having to move close to your target to land your arrows even if the weapon is designed for long-range encounters… and still missing that same target. 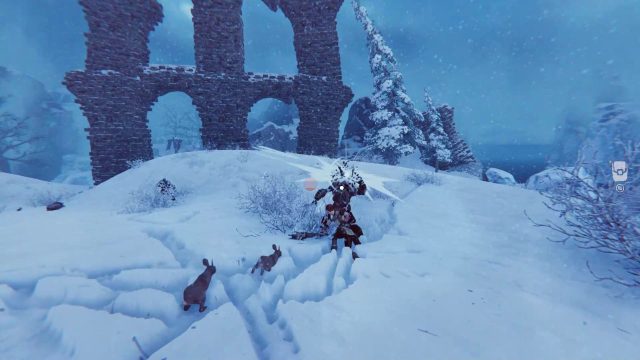 Praey for the Gods features several difficulties ranging from Easy and Normal to Hard and Legendary. They differ from one another based on the increased damage the player takes as well as whether or not the cold will ultimately kill them. Additionally, you can raise the difficulty further by reducing the rate of your stamina regeneration by selecting Boost or Survival Modes. 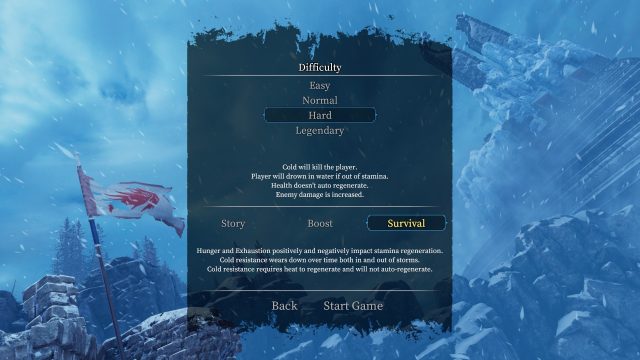 Praey for the Gods shines when it comes to boss encounters, which are very engaging and exhilarating. The scale and magnitude of these colossal gods are incredible. Each of them is distinctly and meticulously designed to exhibit how intimidating they truly are. 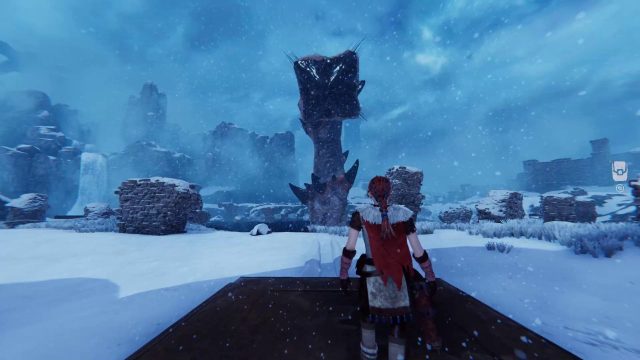 Figuring out their locations is straightforward. Simply follow the vortex markers in the map or observe the direction of the sky’s light path. When you get to their lair, it’s up to you to strategize, scan the environment to gain an advantage, and utilize tools at your disposal. The game provides you with the opportunity to defeat these creatures however you like since they require different tactics. 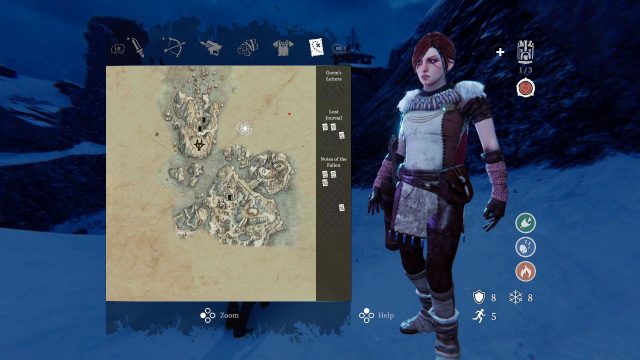 Half of the fight is figuring out how to climb them in order to find and attack their weak spots, all while managing your stamina and grip strength. However, it’s not as easy as it sounds since you have to mash buttons at the right time to cling onto their fur, otherwise, you’ll be thrown to the ground where you’ll have to start again. This can sometimes lead to frustration but it’s part of the challenge. 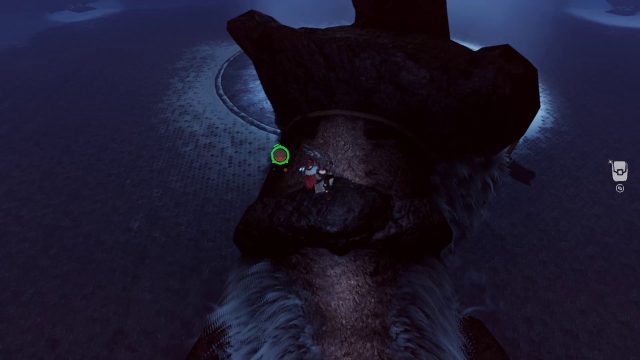 What’s different from SotC is that you won’t be using any of your weapons to deal deadly blows. Instead, you’ll be pulling and pushing contraptions located on the bosses’ weak spots, also known as “ringing the bells” to defeat them. Overall, these fights are the backbone of the game, and the developers have done a great job in paying tribute to SotC.

Praey for the Gods Final Thoughts

Praey for the Gods is a commendable achievement from a team comprised of only 3 people. Through sheer dedication, they’ve shown us what it means to build a game that takes the best elements of SoTC. Although there are some issues with the survival elements and general combat style, Praey for the Gods manages to set itself apart due to how well the execution of the boss fight mechanics is. One thing is for certain – the good aspects of the game are really good. 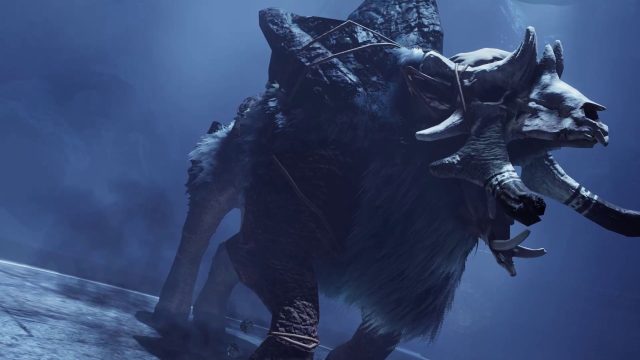 If you’ve been wanting to relive the wonderful experience that SotC has provided or if you intend to challenge yourself by defeating imposing and intimidating gods, then this action-adventure game may be for you. It also features beautiful visuals and an amazing soundtrack. You can purchase Praey for the Gods for 29.99 USD.

What are your thoughts about Praey for the Gods? If you’ve played it, what is your most favorite part of the game? Let us know in the comments below! Catch more hands-on impressions in our latest previews Age of Darkness: Final Stand – An RTS Survival Hybrid! and Sands of Salzaar Gameplay Preview – Action Adventure Sandbox RPG.