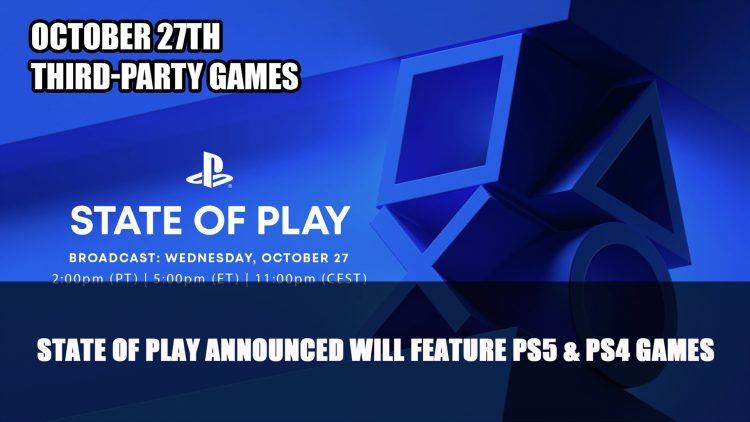 Sony announces next State of Play featuring third-party games for PS4 and PS5 on October 27th.

The next State of Play will be happening on October 27th, where Sony will be featuring games from third-party developers for Playstation 5 and Playstation 4. The livestream will start October 27 at 2:00 pm PDT, 5:00 pm EDTG, 10:00 pm BST, or 11:00 pm CST available on Twitch and Youtube. The broadcast will last about 20 minutes, mostly taking a look at previously-revealed games for PS5 and PS5 but “a few reveals” are mentioned in the announcement.

As for what exactly we’ll see hopefully we’ll be seeing the likes of more Square Enix, maybe some Final Fantasy XVI? Is that too much to hope for? With the recent announcement of the closed network test for Elden Ring for consoles, maybe some news on this title possibly.

You can check out the full announcement details below:

This time out, we’ll be focusing on announcements and updates for upcoming third-party releases headed to PS5 and PS4.

The show is looking to be ~20 minutes or so, and will share new looks at previously announced games, plus a few reveals from our partners around the world.

For more news check out next Babylon’s Fall Devs Preview Improved Graphics & Gameplay In Footage Ahead Of Third Closed Beta and for a rundown of recent RPG news find it here in Top RPG News Of The Week: October 24th (Elden Ring, King Arthur: Knight’s Tale, Cyberpunk 2077 And More!).