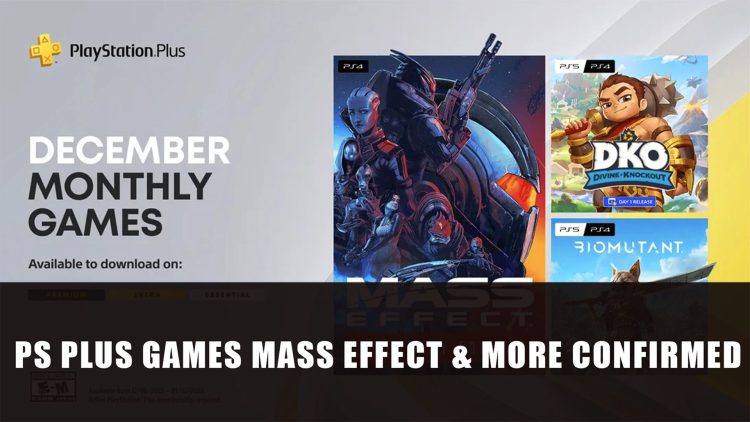 Coming to Playstation Plus this month are a couple of major RPGs and the day-one release. First up is the Mass Effect Legendary Edition, which contains three Mass Effect games. There is also the action-packed cute fuzzy Biomutant title joining the monthly games. Lastly, the platform fighter Divine Knockout Founder’s Edition.

If you haven’t had a chance to play the Mass Effect trilogy, you’re in for a treat this December, as you can play all three games. The Legendary Edition includes all the base content plus over 40 DLC from Mass Effect, Mass Effect 2 and Mass Effect 3. This means having access to all the promo weapons, armors and packs. The games are remastered and optimised in 4K Ultra HD. The Action-RPG follows Commander Shepard into the universe as he explores with his crew of companions. Bioware are working on the next game in the series, so it’s the perfect time to play through.

You can also play the furry open-world RPG title Biomutant, which follows your own customised creature with some interesting abilities. Use recycled materials to craft weapons such as melee and shotguns. The title received a PS5 version upgrade in September, meaning it now supports 4K and HDR with three different graphics modes.

Your PlayStation Plus Monthly Games for December:

If you’re looking for a platform fighter, you can also play Divine Knockout Founder’s Edition which pits players against each other in a smash ’em-up arena. Choose from ten different playable gods such as Hercules or even Thor. There’s 3v3 Arcade mode, 1v1 and 2v2 Duels. The game also features cross-play and cross-progression. The Founder’s Edition comes with bonus content and the DKO skin inspired by Smite.

As these are available on the Essential tier of PS Plus, it’s available for all tiers of the subscription. Be sure to pick Nioh 2, Lego Harry Potter Collection and Heavenly Bodies from November’s selection before December 5th, as this will be when these games will be leaving the PS Plus.