In this Pillars of Eternity 2: Deadfire Build Guide we are going to be taking a look at newly added Rogue Subclass called Debonaire. I’ll be providing information on Attributes, Weapons, Armor, and most importantly, what Abilities to take and how to use them. Please note that this Build Guide was updated for the 5.0 version of the game, as well as 1.01 on console (as of January 22th, 2020), and works with both Real Time with Pause and Turn-Based.

The Debonaire Rogue class specializes in Charming enemies, and it receives the Roguish Charm ability which Charms enemies, and that only costs 1 Guile. Debonaire Rogues also receive 100% Hit To Crit conversion when attacking Charmed enemies, and 15% Hit to Graze conversion when being attacked if not afflicted at that time. Note that Hit to Crit works against Charmed enemies, not Dominated ones. The downside of playing a Debonaire Rogue is that it cannot engage enemies, making Persistent Distraction, which is one of the best passive abilities in game, unavailable.  This subclass also receives the Cowardice debuff which adds a -10 penalty to Accuracy if not near another party member. 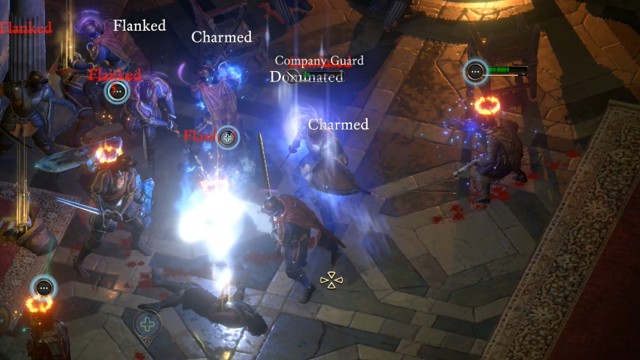 Enemies will do the work for you with this build

Debonaire Rogues can be played as single class, but it isn’t nearly as effective. Instead I have decided to multiclass it with a Beguiler Cipher due to many abilities that could Charm enemies. The Beguiler Subclass also grants Deception Cipher spells increased range and restores Focus whenever Deception spells have been successfully cast on an enemy that is vulnerable to Sneak Attack.

Attribute spread needs to be that of a typical rogue, meaning lots of points into Dexterity, Perception and Might with additional focus on Intellect in order to extend the Duration of spells. We are fighting from long range so Resolve is not that needed, meaning you can reduce it and put points elsewhere. Below is the spread I went with, to give you some idea what to go for. If you’re playing Turn-Based then you can dump Dexterity and place extra points into Might, Perception and Intellect. 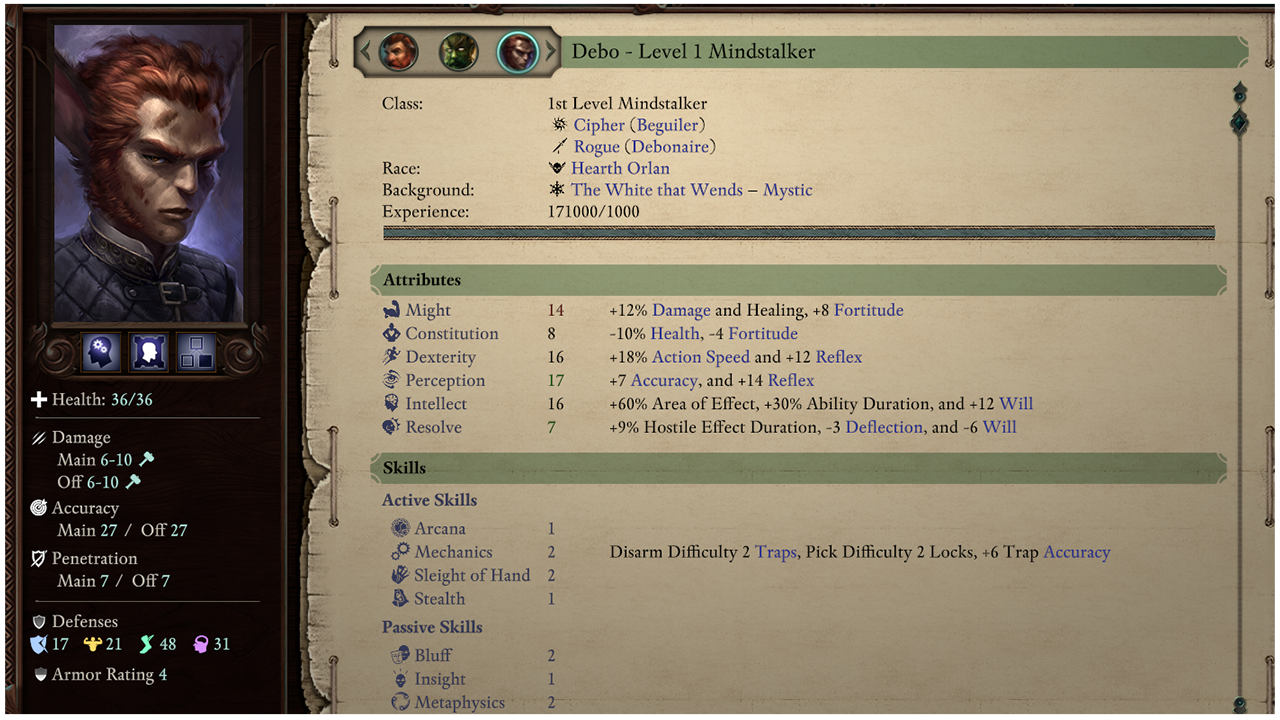 This build is not equipment dependent, meaning you can choose from what you have available and you’ll still be ok. Things to focus on are any items that increase PER, DEX, INT, MIG or damage in any way. Your primary weapon setup should be Dual Pistols, with proficiency in Pistols. Rapid Reload is a useful ability since we need to take a lot of actions and do not want to waste too much time reloading our guns. The great thing about Pistols is that they are ranged weapons, which increases your survivability and gives the option to cast spells from afar. This allows you to Charm enemies left and right and picking them off one by one without being in too much danger. 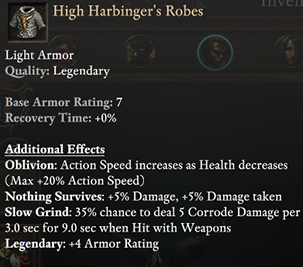 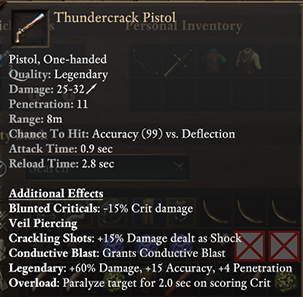 Armor should be lighter in order to have reduced Recovery Time, unless you play on Turn-Based where you can get away with Medium or Heavy Armor. High Harbinger’s Robe, Miscreant Leather, Swift Hunter’s Garb and anything similar is the type of armor we are looking for. For other items I would recommend Thaos’ Headdress, Ajamuut Stalking Cloak, Sash of Judgment or anything similar. There are many options since, as mentioned above, this is not an equipment dependent build.

There aren’t many Abilities we need to make this work, and what this build focuses on is using Cipher Deception spells to debuff enemies and control them afterwards. Whisper of Treason is a level 1 ability that Charms enemies. That gives you already 2 Charming abilities at level 1, which can be very beneficial. Phantom Foes is the second Ability that is a must have. It inflicts Flanked in a huge radius for about 30 seconds, giving you a bonus to Accuracy, and a much easier way of inflicting an additional 50% damage via the Deathblows passive. The next must have Ability is Ringleader. It Dominates one target and Charms enemies around it, making it a perfect fit for this build. Next to these 3 must have Abilities I would highly recommend anything that inflicts Intellect Afflictions because it reduces Will defense, making Dominating/Charming enemies easier. Mind Plague is a good example.

From Rogue we only need Debilitating Strike to do high amount of damage and Smoke Cloud or Shadowing Beyond to get out of danger. Here is a list of must have Abilities. These are not all the points you can spend, so do you have wiggle room to add anything you like to the build.

Debilitating Strike – An amazing Ability that increases damage dealt by +25% and adds 2 Bonus Penetration. Next to that it is a Full Attack, meaning you are going to attack with both weapons at once. This is the ability you will be using the most, as it only costs 1 AP and is available very early in the game. The Debilitating upgrade also puts the Distracted Affliction on the enemy.

Shadowing Beyond – A useful Ability for this build that can be exchanged for Smoke Veil. Both are fine, but Shadowing Beyond lasts longer, giving you more time to cast self buffing Abilites without breaking stealth. Next to that it, grants you +50 Deflection for 10 seconds, increasing surviveability by a lot after exiting Stealth.

Smoke Veil – Makes you invisible for small period of time. Good for escaping bad situations but it is not as reliable as Shadowing Beyond because Invisibility is easily broken in many ways. The benefit is it costs only 2 Guile, unlike Shadowing Beyond which costs 3.

Backstab – Increases Damage from Stealth if 2m or closer to the opponent. It can lead to massive damage when used with Crippling Strike.

Two Weapon Style – Decreases Recovery Time when wielding 2 Weapons. A must for this build since Dual Weapons are used, unless playing Turn-Based.

Dirty Fighting – Converts 10% of Hits to Crits. Works with Melee Attacks and Abilities, making it a must for any damage dealing Class.

Deep Wounds – 20% of Damage dealt added as Raw Damage over time. A great ability for increasing your overall damage output.

Slippery Mind – A great survival Ability that makes you immune to Perception, Intellect and Resolve Afflictions while Bloodied or Near Death.

Deathblows – Increases Damage done by 50% with Abilities and Weapons against any opponent that suffers from 2 or more Afflictions that enable Sneak Attack. We don’t have Persistent Distraction this time to get easy access to Deathblows, but it is easily obtainable after casting Phantom Foes and Debilitating Strike or any other ability that puts an affliction on an enemy.

Whisper of Treason – Charms one enemy. This one goes without saying, since the entire theme of the build is to Charm enemies for guaranteed Criticals.

Phantom Foes – A must have ability that puts the Flanked status on anyone in huge area.

Ringleader – Dominates one enemy and charms other enemies around the Dominated one. It has small AoE, but when many enemies are stacked on the party Tank, it makes it quite a valuable thing to have.

Combat Focus – Start the combat with Concentration. We are casting spells so it is important not to get interrupted immediately.

Lingering Echoes – Increases Duration of Afflictions caused by a Cipher by 10%. Since we want enemies to be vulnerable as long as possible this is a no brainer.

The Empty Soul – Adds +10 Accuracy to Cipher Spells targeting enemy Will. That is every spell we are using, making this a must. Does not work with Roguish Charm.

As with any Rogue, I would recommend starting the fight from Stealth. If you are using melee weapons instead of ranged ones, go for Crippling Strike from stealth for massive damage. If you are using ranged weapons then use Stealth to stay safe at range and start combat with Crippling Strike or wait it out until everyone is in position before you act. Remember to have one other ranged party member somewhere near you so that you do not get Cowardice debuff. After the fight starts your rotation should look something like this:

This build can be played from early on in the game because you get Whisper of Treason, Roguish Charm and Crippling Strike at level 1. Add other Abilities and passives from the list and add some of your own on top of that. The Build shines against anything that can be Dominated/Charmed and it is still good against enemies that are immune to it. You only need to use Phantom Foes and any other ability that puts an Affliction, that way Deathblows is activated and you get +50% bonus to damage.

Dominating/Charming enemies never gets old with this build

As for Skills, I would recommend Stealth or Alchemy. With Stealth it is going to be much easier staying Invisible when the fight starts so that you can act whenever you want. Alchemy increases the potency and duration of Drugs, which are still useful despite the nerfing to them. Using any drug that boosts PER would be most beneficial.