In this Pillars of Eternity 2: Deadfire Build Guide we’re going to be taking a look at the sixth companion you usually acquire: Tekēhu. I’ll be explaining my Druid Build for both the regular real-time with pause and turn-based modes, so that anyone can use him effectively. If you plan to use Tekēhu in your party then read on for some insight into this mystical Companion. Please note that this Build Guide was updated for the 5.0 version of the game, as well as 1.02 on console (as of January 25th, 2020), and works with both Real Time with Pause and Turn-Based.

Tekēhu can be found at the Watershapers Guild in the Periki’s Overlook district of Neketaka. Once recruited you’ll have to decide between a Single Class Chanter, Single Class Druid or a Theurge (Multiclass Druid/Chanter). This can be a very tough decision for new players because it’s one that is permanent, and cannot be reversed later.

Tekēhu’s stat spread is much more suited to Real Time With Pause than Turn-Based because of the a higher Dexterity value and a modest amount of Might. He also has only 10 Perception, making him more suited for a Chanter that buffs teammates and summons things than a DPS, but unfortunately his Subclass of Chanter doesn’t allow for summons. When I play him, I make him a Single Class Druid and I’ll explain why.

10 Perception is terrible to begin with for a DPS class, but his Subclass of Druid is so good that we tough it out anyway!

First, both of his unique Subclasses are excellent and you really can’t go that wrong making a Multiclass Theurge, but the biggest issue here is damage. If he Multiclasses or plays a Single Class Chanter his damage will suffer, and most of his benefit will be passive. This is because he will gain Penetration from Power Levels, and he desperately needs it or his Elements spells won’t deal fuck all damage, and he’ll gain Power Levels faster as a Single Class.

Second, the unique Subclass for Druid allows him to cast certain AoEs without fear of damaging party members, which may be one of the best Subclass bonuses in the game. This allows you to nuke enemies from orbit at will, regardless of your positioning, and can make all the difference in a fight.

And third, by focusing on Water and Frost spells he can take the passive Secrets of Rime to further boost Penetration and it will affect 95% of the damaging spells he casts. This allows him to save Ability Points he’d have to spread around into Penetration passives. Additionally, his  unique Rod: Watershaper’s Focus will give him an additional Power Level in Water and Frost spells once Enchanted, which is perfect.

Because you’ll be focusing on Water and Frost spells, you’ll be able to take this passive and gain maximum benefit.

The way this Build works is that once combat begins I usually wait for enemies to group up before selecting the appropriate spell for the situation. Despite all your spells being Water or Frost based, some deal Crush or Fire Damage. Look at the Armor of the enemies you are facing and select the damage type that matches the lowest value they have and cast that. Repeat this until all enemies are dead, using your healing spells as necessary to keep your teammates alive. Tekēhu doubles as a Nuker/Healer this way and has a lot of versatility.

The Watershaper Subclass lets Tekēhu cast select Water and Frost AoEs as Foe AoE’s, meaning they will not damage your party members. In exchange, he loses access to summon and fire spells. This is one of the best Subclasses in the game and makes a great case to use Tekēhu from the moment you can get him in Perikis Overlook. Because these spells deal Frost, Crush or Fire Damage he doesn’t have to worry about Immunities as much as you’d think, and is often still in a great position to nuke enemies down. 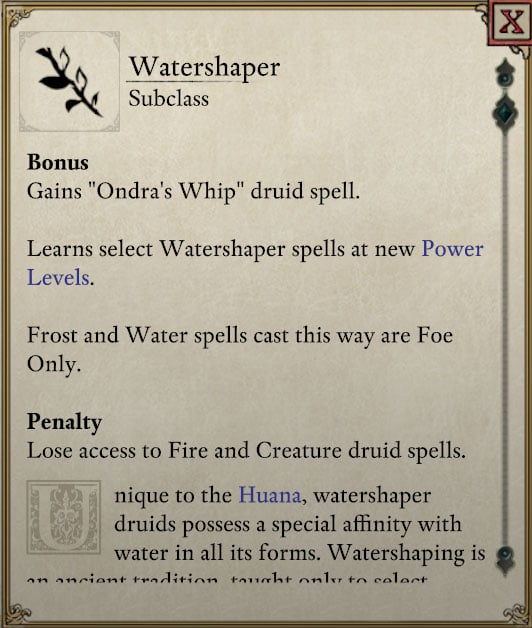 What weapon Tekēhu uses is not particularly important because he’ll be casting 80% of the time, and transformed the other 20%, usually. However, I recommend using the the Rod he begins with and enchanting it to further boost your Frost and Water Power Level by +1 early on, as mentioned above. Besides that, look for things that boost Penetration or Accuracy with spells.

Armor-wise you want to use Light if playing RTWP or Medium to Heavy if you’re playing Turn-Based. You want Tekēhu to begin casting his AoEs once enemies have grouped together, and that usually takes a moment to occur. If you’re playing Turn-Based, you want to go just before your finisher, and after any debuffs have been cast on the enemies, which is near last on your team. This will ensure the highest chance for success, e.g. damage. 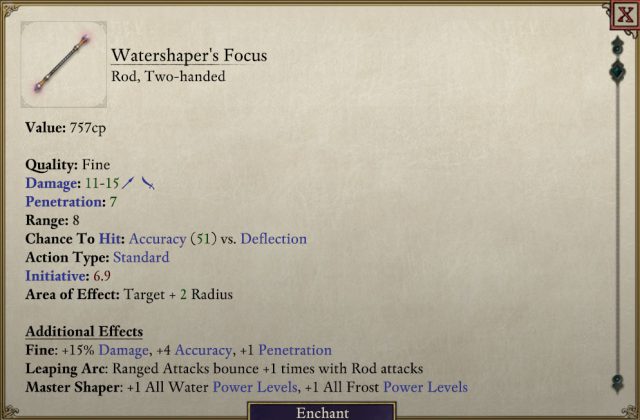 You can Enchant Watershaper’s Focus to give +1 Power Level to all Water and Frost spells.

In this section we’re going to cover the “must have” Druid Abilities for this Build. These are the ones that really make the Build work, and ones that anyone playing this way should take. Since this is a Single Class Build, let’s take a look at the Druid Skills.

Nature’s Mark – This Skill is great a prepping enemies for your spells so they have a higher chance to Hit. Tekēhu has terrible Perception so anything you can do to debuff enemies making him more likely to Hit is worth it. The bonus is that this also reduces Deflection, helping out the rest of your party as well.

Blizzard – The first Foe AoE you’ll get. Deals Frost Damage and reduces that Action Speed of enemies Hit, which reduces the overall damage your party will take. Use often.

Wildstrike Freeze – This passive is a great way to boost damage while you are shifted, which you will be when it makes no sense to AoE.

Chill Fog – The second Foe AoE you will get, and it Blinds and Flanks enemies. This spell being a Foe AoE is a game changer, because you can make enemies perpetually Blind and Flanked while sparing your party members. If you have a Tactician in your group they will love you because they will be constantly Brilliant!

Boiling Spray – This spell deals Fire Damage, which gives you another damage type to use, though it counts as a Water spell. It casts in a cone in front of you, so you’ll need to be just behind your tank ideally when casting it.

Overwhelming Wave – This one is not automatically gained, and is not at Foe AoE, but is still useful in dealing damage and Stunning large groups of enemies. It counts as a Water spell too, and deals Crush Damage. Be careful not to hit your party members, and use it only when it’s safe.

Spell Shaping – This ability is a must for any mage that uses AoEs because it allows you to extend or decrease the range of spells in exchange for higher or lower Power Levels. If you find Penetration is an issue, try reducing the size of your spells to get through enemy Armor.

Secrets of Rime – Increases Penetration by 1 for all Frost and Water spells, which is the type Tekēhu uses. This is more important than you’d think so get it immediately once it becomes available.

Ocean Burst – A large Foe AoE Crush Damage spell that you’ll use instead of Hail Storm once acquired, as it doesn’t hit your party and deals more damage. Use when Crush Damage is the best type and you can hit lots of enemies.

Greater Wildstrike Freeze – Further boosts your attack damage while shifted, so is a good choice if nothing else is available.

Rapid Casting – Only needed if you’re playing RTWP, it can help you get spells off faster so that you are less likely to be interrupted.

Blast of Frost – This is a Foe AoE of Frost Damage, and you’ll use this instead of Hail Storm once you get it when you want to do large amounts of Frost Damage. It works much like Boiling Spray, hitting in a cone in front of you, so positioning is important for this one. Ideally behind the tank.

Wildstrike Frenzy Freeze – This Skill will make you a deadly force in melee range by causing an AoE when you strike.

Ninagauth’s Freezing Pillar – A large Foe AoE that deals Frost Damage and Hobbles enemies. A great way to keep enemies from getting to you if you can cast it fast enough. Make sure you have Light Armor if you want to use this ASAP in combat.

Great Maelstrom – A massive damaging AoE spell that deals many different damage types. Make sure none of your friendlies are caught in this spell when you cast it or they will likely die.

As mentioned above, Penetration is a serious issue for Tekēhu so you’ll need to get all you can get. One way you can help your spells connect is by having a Chanter in your party cast The Shield Cracks, reducing enemy Armor by 2 in a large conal AoE. This helps tremendously, and is one of the reasons I bring a Chanter along when using Tekēhu. If you don’t have a Chanter in your group, consider Multiclassing Tekēhu.

Tekēhu has terrible Accuracy compared to some mages because he has 10 Perception, meaning he will always be lagging a bit behind where you want him to be in terms of Accuracy. Be sure to give him items that increase his Perception or Accuracy, and make sure to debuff enemies with spells like Nature’s Mark before casting your heavy hitters or you might waste your spells.

Gauntlets of Accuracy provide Accuracy to both Weapon attacks and Spells. He needs this badly, so it’s a good idea to give them to him.

Remember to use Spell Shaping often. Reduce the size of your AoEs if you don’t need them to be large to make your spells more effective, and increase them if you can hit more enemies if you do. This skill really improves the versatility of Tekēhu, so use it as much as you can.

Lastly, Tekēhu heals relatively well when not DPSing. He can cast The Moon’s Light, Nature’s Balm, Moonwell and Cleansing Wind, which will all give a decent amount of healing. Keep in mind that most of these are heal over time abilities, so they won’t save anyone Near Death. Learn to use them when your party is at about half Health to prevent situations that get party members killed.