In this Pillars of Eternity 2: Deadfire Build Guide we’re going to be taking a look at the fourth companion you usually acquire: Serafen. I’ll be explaining my Barbarian Build for both the regular real-time with pause and turn-based modes, so that anyone can use him effectively. If you plan to use Serafen in your party then read on for some insight into this witty Companion. Please note that this Build Guide was updated for the 5.0 version of the game, as well as 1.02 on console (as of January 25th, 2020), and works with both Real Time with Pause and Turn-Based.

Serafen can be found immediately once you depart the starting island of the game, and have repaired your ship. Once recruited you’ll need to choose between a Single Class Cipher, Single Class Barbarian or a Witch (Cipher/Barbarian) Multiclass. This can be a very tough decision for new players because it’s one that is permanent, and cannot be reversed later.

Serafen’s stat spread is better for Turn-Based than Real Time With Pause because of the high Might and modest Dexterity, but he can play the ranged or melee DPS role effectively due to a high Health pool. When I like to play Serafen, I play him as a Single Class Barbarian, and I’ll explain why that is.

First, Serafen’s Cipher Subclass makes it so that he sometimes gets negative results (as well as positive ones) when casting Cipher spells, and this can mess up your combat, forcing you to start over in a small amount of cases. I rather enjoy playing with less RNG, and so I don’t like this Subclass.

Second, Barbarians are one of the few Classes in the game where No Subclass can be better than any other Subclass for the DPS role. Berserker is a much more enticing option, and does more damage, but takes micromanaging and is not new player friendly. No Subclass Barbarians allow for a much broader style of gameplay.

Third, Barbarians only have one good Weapon-based Ability if they Multiclass (Barbaric Smash), and it costs 2 Rage, meaning they will get to use it very few times before they run out of Rage. This is especially true, because they will want to spend 1 Rage on Frenzy every so often. Ciphers provide no Weapon-Based abilities either, since you can’t choose Soul Blade for Serafen. 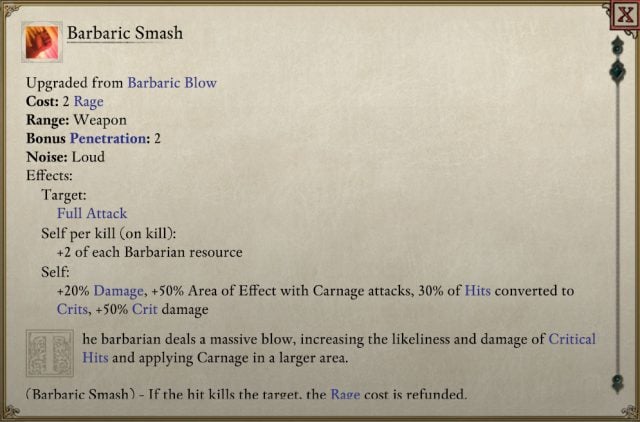 Barbarians tend to have serious resource issues until they gain access to Barbaric Smash. This happens at level 9 if a Barbarian is Single Class and level 13 if Multiclassed.

Barbaric Smash is acquired at level 9 when Single Class, and at level 13 when Multiclassing, and allows the Barbarian to refund the cost of its use if they kill the target. This stretches out their Rage efficiency, since they can potentially use Barbaric Smash a limitless number of times if they play smartly. You get Serafen around Level 4 or 5, which means you would need to gain 8 or 9 levels before he really becomes effective if you Multiclass, and only 4 or 5 if you Single Class. Single Class makes him much more viable earlier on in the game.

The way this Build works is that at the beginning of combat you’ll use Frenzy to buff your Damage and Attack Speed and then you’ll try to attack the lowest Health target that is near other enemies. Serafen will gain an extra +20% Damage when near 2 enemies, and Carnage will hit each nearby enemy when you get a Hit, so you want to be in a pack of enemies if possible. Use Barbaric Smash once any target gets below 50% Health to try to finish then in one strike and refund it’s cost. Rinse and Repeat. Serafen will just get more and more powerful as he gains levels, being exceptionally so once he obtains Heart of Fury.

Serafen comes with No Subclass Barbarian, which is usually how I play my Barbarian anyway with my own character, since I hate micromanaging Berserker. This means he has no penalties or bonuses, and he can use any Weapons or Armor he wishes. I generally don’t like playing Companions that don’t have unique Subclasses, since I find them more interesting, but Serafen is one of the more interesting characters in the game, and No Subclass Barbarian is actually pretty damn strong.

No Subclass Barbarians don’t gain the benefit or penalties of the Berserker Subclass when using Frenzy.

Serafen comes with Proficiency in Battle Axe, Sword and Blunderbuss, and comes with his own unique Blunderbuss: Hand Mortar. I don’t advise using both a ranged weapon and melee weapon in the same slot, since it is a more advanced style of play and is very gear and skill dependent. I suggest playing Serafen as a melee character to take full advantage of Barbarian’s strengths (Carnage, One Stands Alone, Interrupting Blows, Vengeful Defeat).

Both Battle Axe and Sword are good choices to dual wield, but both have low Penetration so it may be a good idea to have another set of Weapons that have a bit more if you need it. Additionally, often times you will kill a target with the first weapon when dual wielding and using Barbaric Smash, meaning you will only get one proc of Carnage off, because the other weapon hits nothing. This makes a case for a two-handed weapon, since it will deal more Carnage Damage to other nearby enemies than a one-handed weapon. Don’t miss out on Carnage Damage! 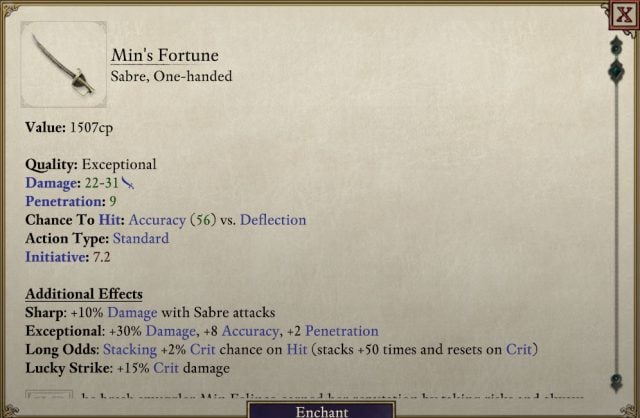 Sabers and Swords can increase their Penetration in exchange for decreased Deflection or slower Recovery Time.

Armor-wise you’ll want Light Armor if playing Real Time With Pause to make sure that you get as many attacks off as possible, but if you’re playing Turn-Based you can use something a bit heavier, since you want Serafen’s turn to be after enemies are damaged and ready to be finished off with Barbaric Smash.

In this section we’re going to cover the “must have” Barbarian Abilities for this Build. These are the ones that really make the Build work, and ones that anyone playing this way should take. Since this is a Single Class Build, let’s take a look at the Barbarian Skills.

Frenzy – We use this constantly to buff our Action Speed, helping to increase our overall damage output.

Blooded – Will boost Serafen’s Damage by 25% when at or below 50% Health. He tends to get hit often because of Frenzy, so this is a good way to further boost damage.

Barbaric Blow – This ability gives you a high damaging attack with a +30% Hit to Crit chance and increased Crit Damage. Works amazing with two weapons.

Accurate Carnage – This Skill will help insure your Carnage hits more enemies, further boosting your damage. +5 doesn’t seem like much, but every little bit counts.

One Stands Alone – A further increased +20% damage in melee when near 2 enemies, which he most certainly will be. Take this to make him deal even more damage.

Bloodlust – This passive increases your Action Speed when you kill an enemy, further increasing your overall damage, so we grab it. Not as useful in Turn-Based, so consider taking something else instead if you’re playing that game mode.

Bloody Slaughter – This ability helps us to ensure we finish off targets with Barbaric Smash.

Unflinching – This ability is great at preventing some Afflictions that would disable you. Get this one when you have a spare point.

Blood Frenzy – This makes our Crits cause Raw Damage bleeding on enemies hit, which will be often.

Lion’s Sprint – A great way to boost Accuracy by +15, but much more useful in Turn-Based than RTWP.

Barbaric Smash – This upgrade of Barbaric Blow allows you to refund your Rage if you kill the target. Since you only have a single class, you’ll need to use your Rage wisely or you will be very useless a ways into the fight. This is a must for Turn-Based Builds.

Brute Force – This passive allows us to target Fortitude if it is lower than Deflection in order to gain better Accuracy. This is great at increasing the likelihood of a Crit.

Blood Thirst – This removes your Recovery Time when you down a target. Not so great in Turn-Based, but one of the best Skills in the game in Real Time With Pause.

Blood Storm – This upgrade increases the Duration when you kill an enemy which synergizes nicely with this Build. We want to cast Frenzy once and spend all other points on other Barbarian Skills, so it helps to extend Rage even further.

Heart of Fury – Possibly one of the strongest Skills in the game, allows you to do a full attack on all nearby enemies, dealing Carnage Damage with each hit. You’ll absolutely want this one!

Vengeful Defeat – A passive that does the same thing as Heart of Fury when Serafen reaches 0 Health. Another great Skill for dealing absurd damage!

Blood Surge – Gives you a chance to refund 1 Rage whenever you kill an enemy. You need all the Rage you can get, so this is a must have later on in the game!

Serafen is a much weaker Companion than some early on in the game, so I strongly suggest you sub him out until you reach level 9. Once he gains Barbaric Smash, he’ll be able to use it with much more regularity, keeping his DPS high through out each combat scenario. If you wish to use him before that, be sure to Empower regularly to refill some of his Rage each fight, to keep him cranking out the damage. 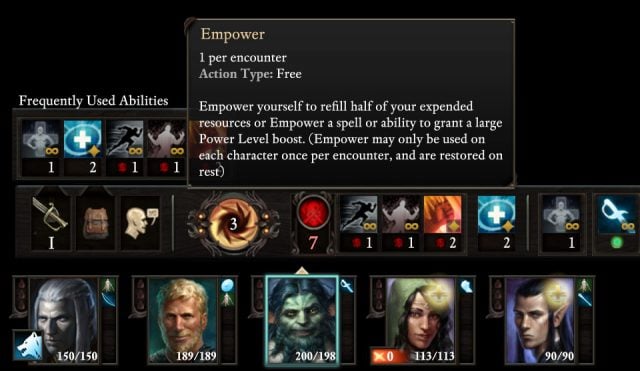 Penetration is an issue for Serafen because neither Sword nor Battle Axe have great Penetration. Consider swapping in some unique Weapons you find that have higher Penetration early on until you can find some better Battle Axes and Swords. This will prevent a huge drop off in damage in some fights, and be sure to watch out for Immunities. Elementals for example are immune to Slash Damage.

Lastly, Serafen will always have a low amount of Deflection, and so will get Hit often. This makes him a bit harder to keep alive then some Companions, and I strongly suggest placing some point into Athletics for a better Second Wind heal. Just make sure to attack first before using it, to get the most of the Blooded Passive.