In this Pillars of Eternity 2: Deadfire Build Guide we’re going to be taking a look at the 7th companion you usually acquire: Maia. I’ll be explaining my Scout Build for both the regular real-time with pause and turn-based modes, so that anyone can use her effectively. If you plan to use Maia in your party then read on for some insight into this dutiful Companion. Please note that this Build Guide was updated for the 5.0 version of the game, as well as 1.02 on console (as of January 25th, 2020), and works with both Real Time with Pause and Turn-Based.

Maia can be found in the Royal Court in the Serpent’s Crown District of Neketaka. Depending on your dialogue choices you can recruit her, Pallegina or both of the them. Once recruited, you will immediately need to choose between a Single Class Ranger (Gunhawk), Multiclass Scout (Rogue/Ranger), or a Multiclass Geomancer (Ranger/Wizard). This can be a very tough decision for new players because it’s one that is permanent, and cannot be reversed later.

Maia’s stat spread is perfect for Ranged DPS since she has decent Might, good Dexterity and high Perception. She is more suited for Real Time With Pause than Turn-Based because of the Dexterity and because her pet bird only attacks once in Turn-Based, while all other pets will attack twice. In RTWP all pets attack once, so this is not a disadvantage in this mode.

When I use Maia I like to make her into a single target DPS specialist that attacks from range, by choosing the Scout Multiclass, and there are a few reasons for that. First, her Ranger Subclass, Gunhawk is only useful if you use are using some form of Firearm, which you will waste if you do not. Second, there is not much point in taking Wizard as a second Class if you plan to be firing your gun most of the time. And third, Rogue provides more Weapon attacks from a different resource pool, allowing you to spend Bond on your Animal Companion to use Takedown if you want, or just have more weapon-based abilities to use in combat.

The way this Build works is that when you get into combat you will use Maia to try to finish off a single target as quickly as possible, this will usually be Rogues or Wizards in the back that are weaker and can potentially be killed in one shot. You’ll have to decide which attack is the best to use for the target you are facing: Arterial Strike, Accurate Wounding Shot or Pierce the Bell. Arterial Strike can be a great way to limit movement of melee enemies so they cannot reach your party, or use it if you need more Penetration. Accurate Wounding Shot is great against targets with high Deflection, and Pierce the Bell is used when you need the highest damage possible.

You’ll use your Animal Companion to target the same enemies if possible, in order to take advantage of Merciless Companion, Stalker’s Link, Predator’s Sense and Takedown. Knocking enemies Prone will reduce their Deflection by 10, and if they happen to be Flanked by your tank they will lose a further 10 Deflection, really helping to boost your chance of Hitting and Critting.

Takedown is a great way to spend Bond in Real Time With Pause as it does more damage and knocks the target Prone, Interrupting their action and reducing their Deflection.

Maia is a Gunhawk Subclass of Ranger, which allows her longer range with all Firearms, as well as a chance to Interrupt with each shot. The first of these bonuses is much more useful than the second for this Build, since Crippling Strike and Strike the Bell both Interrupt anyway. Her Animal Companion is a bird that cannot be Engaged, so it doesn’t have to worry about Disengagement attacks and can move freely, but only attacks once by default in Turn-Based compared with other Animal Companions, which do two attacks by default.

No Subclass Rogue is the other Class you will gain with this Build, which is not bad for this Build. No Subclass Rogues are extremely flexible, and do not need to meet certain requirements to be effective. Assassin may make better sense for this type of Build because she comes with Stealth by default, but unfortunately we are not given that option. Regardless, if you can’t choose Assassin then No Subclass is the next best choice for this sort of setup. 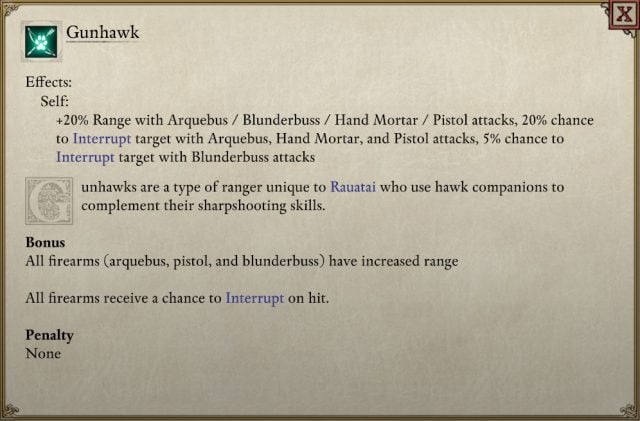 Gunhawk is not the greatest Subclass in the game, but extra Range is not bad.

Because Maia is a Gunhawk Ranger, and all her benefits apply when she’s using a Firearm you will naturally want to pick one as her weapon of choice. It doesn’t matter which you choose, so select the one that best fits your needs, but one really great weapon for this build is the Red Hand, if you are playing Real Time With Pause. This weapon allows you to fire twice before reloading in exchange for reduced range. However, since Maia has extended range with these weapon types, she makes up for this with her passive. Sadly, this weapon does not fire two shots per round in Turn-Based, and so is only recommended for RTWP.

Armor-wise you’ll want to use something Light in order to get shots of as quickly as you can. Firearms tend to have lengthy reload animations, and you don’t want to extend this further with Medium or Heavy Armor. One really good choice is Sharpshooter’s Garb, which reduces your reload time, but only if you are using an Arquebus, like the Red Hand. 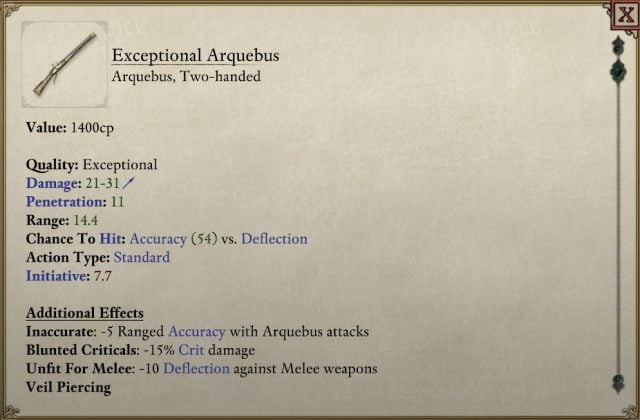 In this section we’re going to cover the “must have” Scout Abilities for this Build. These are the ones that really make the Build work, and ones that anyone playing this way should take. Let’s start with Ranger.

Wounding Shot – This ability deals Raw Damage over time to the target, which is great for beginning fights, as it will weaken them between shots. It also allows your Animal Companion extra damage on that enemy if you have the Predator’s Sense ability.

Merciless Companion – A great way to increase your Animal Companion’s damage when the target is Flanked or suffering from an Affliction.

Vicious Companion – This ability is needed more for the Penetration than the damage, otherwise your Animal Companion will be useless against some enemy types. Be sure to get this one fairly early in the game.

Marksman – This passive increases your Accuracy against targets more than 4m away by +5. You can never get enough Accuracy with this Build so it’s an easy choice here.

Takedown – A great way to spend your excess Bond and help increase your Companion’s damage. If you upgrade this ability you can make it particularly effective.

Two-Handed Style – This passive will increase your damage with Arquebuses, but if you don’t use this type of weapon then be sure to get Two Weapon Style.

Accurate Wounding Shot – This increases your Accuracy by 20 with Wounding Shot, upping the likelihood that you will Hit or Crit.

Protective Companion –  This ability allows your Animal Companion to Engage an enemy, allowing for it to lock it down. This helps with damage as well as defense over the course of a fight.

Predator’s Sense – This will further boost your Animal Companion’s damage when the target has a DoT on it. A must have if you want an effective Companion.

Stalker’s Link – This ability grants both you and your Companion increased Accuracy when attacking the same target. Coordinate for best effect!

Driving Flight – This passive makes it so that you hit an additional target with another shot when using Ranged Weapons. This will effectively double Maia’s damage in some cases, so you definitely want this one.

Uncanny Luck – Increases our Hit to Crit chance 5% which will create a few more Crits now and then so we take this one.

Survival of the Fittest – This increases your Accuracy and your Pet’s Accuracy when above 75% Health against enemies who are below 50% Health. Again we need all the Accuracy we can get, so we take this one.

Improved Critical – We’ll be doing lots of Crits with this Build so this helps our damage by a modest amount.

Crippling Strike – This ability is a great way to deal extra damage and Penetration for only 1 Guile. Use this one when you need a bit more damage than Accurate Wounding Shot.

Dirty Fighting – This ability increases the likelihood our shots will Crit by 10% if we Hit so we take it. Anything that might increase our potential damage is what we’re after, and Crits do more damage.

Strike the Bell – Does the same damage as Crippling Strike, but has increased Penetration. You’ll use this when you need even more Penetration to get damage on the target only.

Pierce the Bell – Boosts the Damage of Strike the Bell by a further 20%, giving it a total of +45% Damage and +5 Penetration. This will be your go to attack when you need to take something down NOW. 2 Guile is a lot for an attack, so make sure you use it wisely, and use Crippling Strike if you don’t need the extra damage or Penetration.

Deep Wounds – This passive puts a Raw Damage DoT on your target if you strike with a weapon, which isn’t super helpful earlier on in the game, but as enemies start to gain larger Health pools it will help out a lot.

Deathblows – Provides +50% Damage against enemies with 2 or more Afflictions. This is not hard to do if your party is setup correctly, and boosts damage significantly.

With this setup Maia will have a ton of resources to spend on weapon attacks, so you will often find that you don’t use all of them in a given fight. For this reason it is advised that you spend some Bond on Takedown or one of it’s upgrades to spend your resources faster, improving your DPS. When you can, you’ll want to use Bond on Takedown, and Guile on Crippling Strike or Strike the Bell.

Maia can gain +20 Accuracy from the Arquebus’ weapon modal, and when combined with Accurate Wounding Shot that gives her +40 Accuracy on that attack. This means she is very likely to Hit or Crit with her attacks, so consider giving her equipment that boosts Crit Damage, like the gloves you find near the beginning of the game.

+20 Accuracy is one of the reasons why it’s a good idea to use Arquebus with Maia.

Maia will have a hard time against enemies that have immunity to Pierce Damage, like Skeletons, so you’ll need to find a way around this. Keeping a Blunderbuss like Fire in the Hole or Hand Mortar around can do the trick since these both do Slash Damage as well as Pierce. Consider keeping them in her back-up slot for just such an occasion, so she isn’t completely useless.

Lastly, Maia’s Gunhawk passive is not the best passive in the game, and you can use other weapon types with her if you don’t wish to use Firearms. She makes a decent candidate for Frostseeker if you have it, because she will have very high Accuracy and is likely to Crit often. 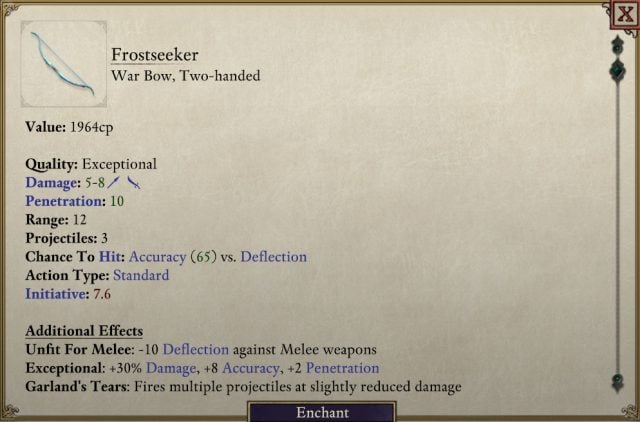