In this Pillars of Eternity 2: Deadfire Build Guide we’re going to be taking a look at the third companion you usually acquire: Aloth. I’ll be explaining my Battlemage Build for both the regular real-time with pause and turn-based modes, so that anyone can use him effectively. If you plan to use Aloth in your party then read on for some insight into this magical Companion. Please note that this Build Guide was updated for the 5.0 version of the game, as well as 1.02 on console (as of January 25th, 2020), and works with both Real Time with Pause and Turn-Based.

Aloth can be found at the Engwithan Digsite, which is east of Port Maje. He is trapped with some researchers in the center of the dig, and you can free him after defeating the enemies there, or by sneaking by them and completing the area and coming back to the center of the digsite. Once recruited, you will immediately need to choose between a Single Class Wizard (No Subclass), Multiclass Spellblade (Rogue/Wizard), or a Multiclass Battlemage (Fighter/Wizard). This can be a very tough decision for new players because it’s one that is permanent, and cannot be reversed later.

Aloth’s Stat spread is setup for a ranged DPS/Crowd Control role. He has some Might, good Dexterity and Perception and excellent Intelligence which is better for Real Time With Pause than Turn-Based. He has poor Constitution, making him less than ideal for front lines, and why I wouldn’t advise making him a Spellblade. Many of the Rogue’s passives are only effective in melee range (Riposte, Backstab, Persistent Distraction), while Fighter provides some abilities that benefit even ranged DPS (Disciplined Strikes, Conqueror’s Stance, Armored Grace).

The benefit you gain from being a Battlemage over a Single Class Wizard is that you can deal substantial damage with Weapons as well as spells, which you tend to run out of rather quickly early on in the game, at which point Aloth becomes rather useless. Blood Mage or Evoker are more suited to Single Class Wizard, since Blood Mage can replenish spells, and Evoker can double cast spells, but Aloth is a No Subclass Wizard. By playing a Battlemage you’ll have an easier time near the beginning of the game, which will help newer players progress more easily while they are still learning the ropes. Note that you should repec Aloth at any Tavern or Inn, as some of his pre-selected abilites are not useful to this Build.

The way this Build works is that Aloth will begin combat by casting Disciplined Strikes, which boosts his Chance to Hit and Critical Chance, which applies to both spells and weapon attacks. He should be in Conqueror’s Stance for +10 Accuracy, again applying to both spells and weapon attacks. If enemies are far away then you’ll spend the beginning of combat buffing with Merciless Gaze, before using Disciplined Strikes for even further increased Critical Chance. You’ll then decide whether to cast a spell or attack with Penetrating Strike, whichever makes the most sense. 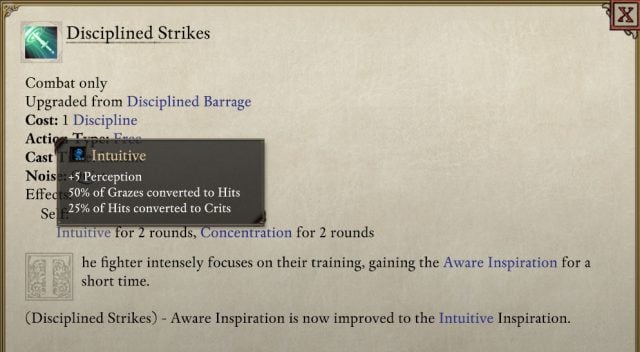 Aloth is a No Subclass Wizard, meaning he comes with no benefits or penalties of any kind. This is less than ideal for a DPS/CCer because as mentioned earlier Blood Mages can replenish their spells, and Evokers can double cast, making them deal substantially more damage on average. This is a primary factor in deciding to make Aloth a Battlemage, since he’ll be more effective when he runs out of spells earlier on in the game.

Aloth will also come with a No Subclass Fighter, which is again less than ideal since you’ll be using Scepters exclusively, but you won’t have any penalties or bonuses which is new player friendly. Devoted would be a much better choice for the increased Critical Damage and Penetration, so if you plan to make a similar Build on a custom character be sure to select that Subclass. 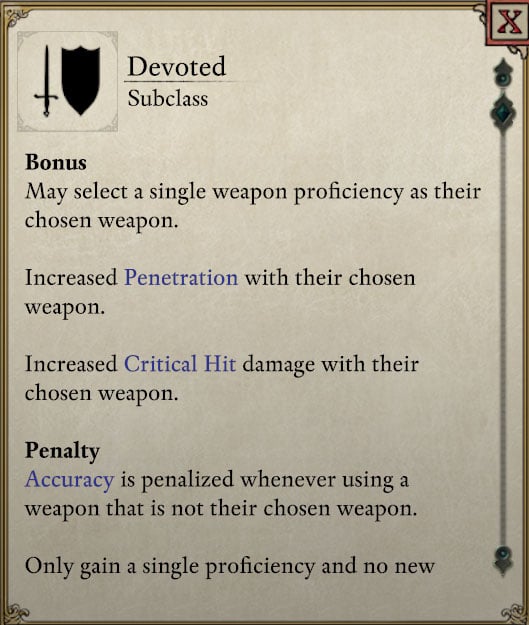 Devoted would be ideal for this Build but we don’t have the option. If you make a custom character with this Build be sure you select Devoted for your Fighter Subclass!

Aloth comes with Proficiency in Scepter, Rod, and Rapier. The reasons I chose Scepters for this Build are several. First, you can increase the Damage and Penetration they deal through Destructive Channeling, which is healed by Constant Recovery. Second, they are ranged weapons that keep you at at safer spell casting distance. Third, they can be dual wielded, which makes the best use of Penetrating Strike. Fourth, all Unique Scepters benefit from dealing Critical Hits, which Aloth is setup to do nicely (45% chance when fully buffed). And finally, Aloth begins the game with the Keybreaker Scepter, which Frightens Kith and can increase party Defenses once Enchanted. 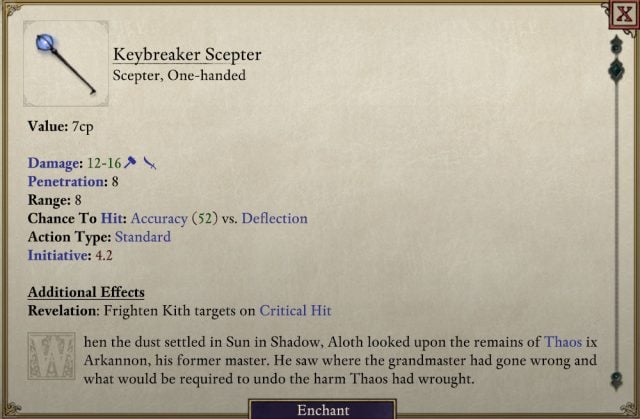 All Unique Scepters do something when you Crit which is why they work well with this Build. Aloth starts with this one, and you can make good use of it.

Armor-wise you’ll want something Light to keep your Attack Speed and Cast Times low. You can use Aloth’s Leather Armor for the increased Area of Effect for a good amount of time, or you can switch to something else. The main thing you want to look for is something that benefits Critical Hits, or benefits both weapon attacks and spells.

In this section we’re going to cover the “must have” Battlemage Abilities for this Build. These are the ones that really make the Build work, and ones that anyone playing this way should take. Let’s start with Fighter.

Disciplined Barrage – This ability increases your Perception, and converts 50% of Grazes to Hits. This is great for not only your weapon attacks, but also your Wizard spells.

Fighter Stances – These Stances become available at level 4 and although you won’t be using Cleaving Stance, Warrior Stance does increase the Accuracy of your weapon attacks and Wizard spells, so is a good fit.

Confident Aim – This passive also helps to convert Grazes to Hits, but only with proficient weapons. Still, it does help with your overall damage output, particularly on harder difficulties.

Disciplined Strikes – This upgrade of Disciplined Barrage increases the likelihood that you will Crit by 25%, which helps increase our overall damage. Because your Scepters need Crits to be more effective this is a better choice than Tactical Barrage.

Penetrating Strike – Since you’ll be playing ranged, this will be your primary form of attacking enemies besides spells. It is a Full Attack, so it will take advantage of both Scepters, boosting your damage tremendously.

Weapon Specialization – This passive will further increase the damage with your proficient weapons, so it is a great choice.

Armored Grace – This ability will reduce the penalty you take to Recovery Time when wearing Armor. This will allow you to wear Light Armor with almost no penalty, and isn’t needed in Turn-Based because it isn’t as important.

Conqueror’s Stance – This skill will further increase your Accuracy with spells and Weapons by +5. You can never have too much accuracy, so this really helps out.

Improved Critical – This passive will further increase your Crit Damage, and you will be doing plenty of Crits so it helps.

Weapon Mastery – Another passive that increases damage so you pick it up. You can never have enough passives that do this, and Fighters possess many, which is great.

Spirit Shield – A good early game source of Armor and Concentration with a really long Duration. This will help keep Aloth alive and prevent interrupts from his spells.

Rapid Casting – This one helps your spells cast faster by a small amount, but it adds up over the course of a fight. It’s not needed in Turn-Based, but be sure to take it if you’re playing RTWP.

Merciless Gaze – This ability will increase your Critical Chance by 15% for a very long Duration, but it has quite a lengthy cast time. Use only when you can do so without being interrupted, such as at the beginning of combat when enemies are still moving towards you.

Spell Shaping – This skill allows you to shrink or grow the AoE of your spells in exchange for increased or decreased Power Level. It’s a great way to boost damage with AoE spells, or make some spells hit more targets in exchange for a little less effectiveness.

As far as spells go, these are left entirely up to the player to decide. It’s always a good idea to have a variety of damage types, and don’t forget some good single target spells as well as AoE. Sometimes one really powerful enemy is harder than 5 weaker enemies, so don’t just load up on AoEs…

Always be sure to use Tactical Barrage or Disciplined Strikes before casting spells because it will change Grazes to Hits 50% of the time, which is a lot! One of the major benefits of the Fighter Class are these abilities, and you don’t want to waste them by forgetting!

If you’re playing Real Time With Pause, consider using only 1 Scepter early on, and later in scenarios where you run out of Discipline. You gain +12 Accuracy when single-handing, and you can gain a further 20% Critical Chance from One-Handed Style. In Real Time With Pause you only attack with your main hand when not using Abilities, whereas you attack with both in Turn-Based on every attack. 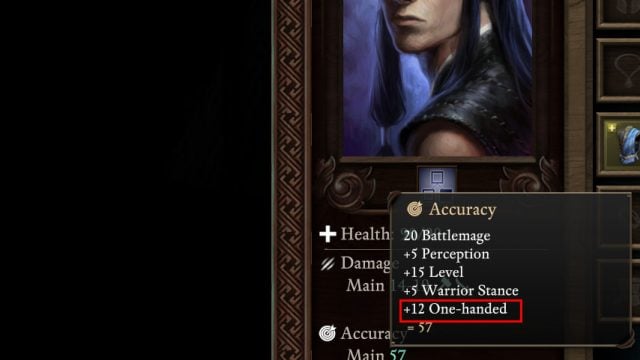 One-Handed is not a bad option, especially if you’re playing Real Time with Pause where you only attack with 1 Weapon by default anyhow.

Make sure to use your party members to reduce the Deflection of enemies you are attacking, further helping your Critical Chance. This can be achieved by Paralyzing them, Flanking them and Knocking them Down. Try to attack enemies that have these status effects for best results.

Lastly, Acina’s Tricorn and Ring of Marksmanship are both excellent for this Build if not being used by other characters. Consider slotting them on Aloth if you don’t have a dedicated ranged damage dealer that uses Weapons.