In this Pillars of Eternity 2: Deadfire Build Guide we’re going to be taking a look at the Transcendent Class, which is a mixture of Cipher and Monk. I’ll be providing information on Attributes, Weapons, Armor, and most importantly, what Abilities to take and how to use them. Please keep in mind that this is my Transcendent Build, and there are plenty of ways you can build this class, and this is not the only one. If you’re new to Pillars of Eternity 2, or you just love creating characters as much as I do, then this Guide is for you. Please note that this Build Guide was updated for the 5.0 version of the game, as well as 1.02 on console (as of January 25th, 2020), and works with both Real Time with Pause and Turn-Based.

The Swift Annihilation Build uses a combination of deadly attacks and spells from Monk and Cipher to handle any situation you may face. What I really like about this combination is that you combine 2 self sustaining Classes that can regain resources through out the course of fight, so that they never have to just auto attack. Ciphers do this by attacking and Monks do this by being attacked, which means no matter what you do you are constantly gaining Focus or Wounds. 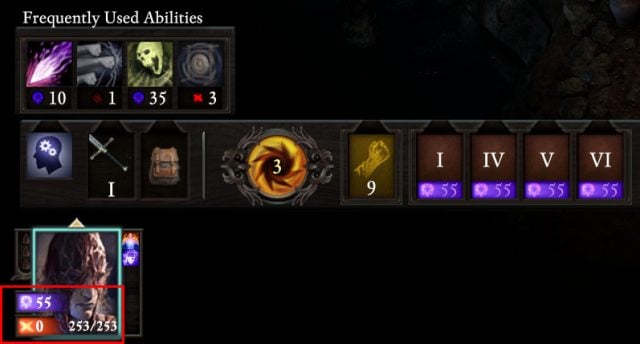 Both Wounds and Focus can be generated infinitely each combat, which is a huge plus point of this Build.

The way this Build works is that when combat begins you’ll buff with Thunderous Blows for added Penetration and Damage, and Lightning Strikes for increased Action Speed and Damage. You’ll pop Enduring Dance for extra Accuracy and Wound generation, and Turning Wheel will boost your Intellect and melee Damage. You’ll cast Borrowed Instinct to buff your Accuracy and Defense, you’ll use Mortification of the Soul to gain some Wounds (if you need to), and then attack with Raised Torment. This should fill your Focus up quite a ways and allow for a Soul Annihilation or an AoE spell. By the time you are finished casting that, you should have enough Wounds to AoE again with Raised Torment, or use Skyward Kick if it’s single target DPS you’re after.

For my Cipher Subclass I chose Soul Blade for cheaper Shred Abilities and access to Soul Annihilation. Soul Annihilation is one of the best melee abilities in PoE 2, and it allows you to damage any enemy since it deals Raw Damage, which goes through Armor. Gaining Concentration when you down an enemy doesn’t hurt either. In short, if you are playing a melee Cipher you’re going to want to play Soul Blade.

This ability is only obtainable as a Soul Blade Cipher.

For my Monk Class I chose No Subclass because Shattered Pillar only gives you Wounds when attacking with a melee weapon, and we use a decent amount of spells with this Build. I would have preferred Helwalker, but honestly you spend your Wounds so fast I don’t really see the point. Helwalkers are better suited to ranged Builds that hold their Woulds for increased damage, whereas with this Build we’ll be spending them as fast as we gain them, thus No Subclass. You could take Nalpazca if you want, which would be better than No Subclass if you don’t mind the drug management.

Because Soul Annihilation, Raised Torment and Skyward Kick are all Primary Attacks it makes sense to use a Two-Handed Weapon. Primary Attacks only use 1 weapon maximum for attacks, and if we dual wield the off-hand weapon will not be used when attacking this way, so we go Two-Handed. What weapon type you like to use is up to you, but Great Sword has an amazing Weapon Modal that allows you to do an additional 30% Damage in exchange for -10 Accuracy. This is very very good, and only gets better as you progress the game, and you gain better Accuracy. You need good Penetration to use this Weapon type, but thankfully we gain an extra +3 Penetration from Thunderous Blows and Hammering Thoughts, so this is not an issue.

Armor-wise you’ll want to use something light so that you can attack as quickly as possible. More attacks = more Wounds & more Focus = more Damage. If you’re playing Turn-Based you can get away with heavier Armor because you will only have one attack per round no matter what you do, so going later in the turn order to gain more protection is not that bad. It also gives enemies a chance to group up so that you can AoE them.

In this section we’re going to cover the “must have” Swift Annihilation Abilities for this Build. You are free to pick and choose which you want outside of these because everyone’s style of play is different and there is no perfect way. However, these ones will be needed for this Build to work effectively.

Mind Wave – Take this one during Character Creation, and use it to AoE enemies when you can. It’s a Foe AoE so it won’t hit your teammates.

Penetrating Visions – This passive gives you an extra Penetration with Cipher spells. Though most Cipher spells have high Penetration or simply don’t need it, it’s not a bad way to spend one point and helps with the damage of Mind Wave.

Iron Will – This passive will offset the loss in Will from low Resolve, so it’s worth picking up.

Draining Whip – Take this upgrade of Soul Whip to get more Focus when attacking to always make sure that we have enough. It helps to charge up Soul Annihilation quickly, and +10% damage from Biting Whip is not that much.

Silent Scream – This ability does Raw Damage on the target, as well as Stuns it, and deals Raw Damage to enemies around it. Raw Damage cannot be resisted so this is a great ability.

Hammering Thoughts – This passive increases your Penetration with all weapons, which is insanely good. This can really up your damage when facing highly armored enemies.

Borrowed Instinct – This ability is a great way to gain improved Accuracy when the fight begins. You can never have enough Accuracy, especially if you’re taking a penalty using Savage Attack on the Great Sword.

The Empty Soul – This ability increases your Cipher spell Accuracy by +10, which is a lot! Take this one when you can, because you will need all the Accuracy you can get with this Build.

Amplified Wave – Another AoE spell that knocks enemies on their ass. You need to cast it on a party member, so make sure your tank has got solid Engagement on a few enemies before casting.

Disintegration – This spell deals a ton of Raw Damage over time to an enemy, which helps kill more difficult enemies with large Health pools and high Armor and resistances.

Swift Strikes – Take this one during Character Creation to speed up your Casting and Attacking. Later we’ll upgrade it to Lightning Strikes for increased damage.

Lesser Wounds – This will allow you to build up Wounds faster, which allows you to spend them faster. This becomes much more important later on once you have Rooting Pain.

wo-Handed Style – This will increase your damage when using the Great Sword, which is great.

Lightning Strikes – This upgrade gives you an additional +15% Shock Damage when attacking with a Weapon. This is a lot because it’s added after all other calculations.

Torment’s Reach – This ability hits the target and hits around it in an AoE. This is great early on, but shines even more later in the game.

Duality of Mortal Presence – This will allow you to gain up to+10 Intellect or Constitution per Wound.

Thunderous Blows – This ability gives us +5 Might and +2 Penetration for only 3 Wounds. It’s a great way to further boost damage and use up some Wounds at the beginning of combat so we can gain more.

Rooting Pain – This ability can deal damage in an AoE around the Monk every time they gain a Wound. Since you can control the rate you gain them, you can proc this regularly for extra damage.

Raised Torment – This upgrade Stuns enemies you hit, making it possible to Stun everyone around you. Get it and enjoy.

Turning Wheel – This wont be as effective as in some Monk Builds because you’ll constantly be draining your Wounds, however, you will gain some benefit from it so we take it.

Skyward Kick – This ability allows you to interrupt and knock Prone everything around you for +50% increased damage and +3 Penetration. This is huge damage for only 3 Wounds!

In this section we’ll cover Attributes for the Swift Annihilation Build, and explain a bit about each and why we need it or why it’s important. Swift Annihilation needs Perception and Dexterity. They can dump Resolve if needed, but don’t reduce Constitution, Intellect or Might. You will likely want a couple points into Constitution since you will be in melee range, and a couple into Intellect to help out with AoE size. If you’re playing Turn-Based then you will exchange Dexterity with Might since turn order is not as important.

Perception is important for hitting enemies with your spells. Spells don’t get increased Accuracy like Weapons do, and that is why you must max Perception during Character Creation. Additionally, you will take a -10 Penalty if you use the Great Sword Weapon Modal, so you’ll need the extra Accuracy.

Dexterity is important for Casting and Attacking quickly, improving the speed at which you deal damage. Dexterity helps with that, so you want at least 15 points here during Character Creation. If, however, you’re playing Turn-Based then swap this for Might, since you can only cast 1 spell or attack once per turn anyway, and Might will help with damage.

This Build starts out kind of slow and you’re going to lean on the Cipher side of it until you gain Torment’s Reach at level 7. So don’t worry if you’re doing a lot of basic attacks for the first several hours of the game, and try to weave in Soul Annihilation when you can, or Mind Wave to help boost damage. Once you get to level 7 this Build really takes off.

You don’t have much healing with this Build so I like to use the Moon Godlike Race to gain a bit every fight. Additionally, make sure to place some points into Athletics to take better advantage of Second Wind. Heal while Thunderous Blows is active for a better heal, since Might affects healing as well as damage!

This will trigger when you get Hurt, Blooded, and Near Death, so 3 heals total in a small AoE around you.

Pay attention to your resources and know your Wound Cap (10) and your Focus Cap (will increase as you level up). Make sure that you aren’t wasting potential resources by not using the resource that is at max. You can’t gain more Wounds or Focus if they are at Cap so spend them!

Lastly, Make sure to use Mortification of the Soul when you need a few more Wounds. Because you need to take damage to gain Wounds, sometimes enemies just aren’t attacking you, and this is a great way to gain some Wounds in order to use Raised Torment if you need to. Just keep an eye on your Health so that you don’t die when using it.

Stay tuned for more Pillars of Eternity 2 Builds as we celebrate the Ultimate Edition launch on PS4 and Xbox One.