In this Pillars of Eternity 2: Deadfire Build Guide we’re going to be taking a look at the Spellblade Class, which is a mixture of Wizard and Rogue. I’ll be providing information on Attributes, Weapons, Armor, and most importantly, what Abilities to take and how to use them. Please keep in mind that this is my Spellblade Build, and there are plenty of ways you can build this class, and this is not the only one. If you’re new to Pillars of Eternity 2, or you just love creating characters as much as I do, then this Guide is for you. Please note that this Build Guide was updated for the 5.0 version of the game, as well as 1.01 on console (as of January 20th, 2020), and works with both Real Time with Pause and Turn-Based.

The Spellblade pairs the ability of the Rogue to Riposte against missed melee attacks, with the high Deflection and defensive buffs of the Wizard Class. This results in many attacks against enemies, and allows for a tank that deals excellent damage. If you’ve been looking for a Riposte Tank Build, then this is the one for you! 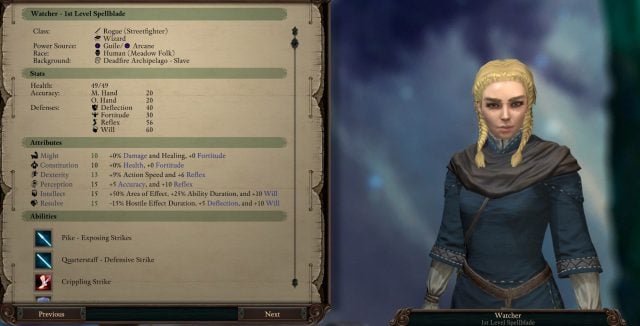 This Build works by using the summoned weapon Citzal’s Spirit Lance, which attacks in an AoE around the target you are attacking. This allows for Ripostes to deal massive damage against all enemies near you, and allows for the application of negative status effects on all enemies, further increasing their miss chance and further bolstering your damage. For example, if you use Gouging Strike you will Blind all enemies around you, put DoTs on them, deal increased damage and and make them Flanked. This will then allow you to gain your Sneak Attack bonus against them as well as your Deathblows bonus, all the while protecting you from attacks. 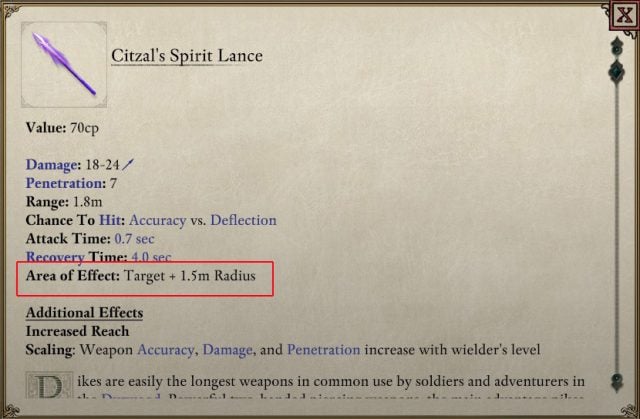 This weapon allows you to Riposte into every enemy around you.

Spellblade Subclasses (No Subclass and Streetfighter)

I chose No Subclass for my Wizard, frankly because you need abilities from Illusion, Conjuration and Enchanting, and you cannot specialize without losing one of those Schools. You do not want to miss out on Llengrath’s Displaced Image by choosing Conjurer, and the only other Subclass worth choosing is Blood Mage, and this is not a bad option either. The only downside is that you can now replenish your Rogue Guile with Empower. Either works though, so this choice is very much up to you.

For Rogue, I chose Streetfighter because you want to be surrounded by as many enemies as possible for this Build to really shine, which then will increase your Sneak Attack Damage as well as reduce your Recover Time. Since this should be the vast majority of the time, you really don’t have to worry about the penalty all that often. You can choose No Subclass as well, but I find it less effective for what we’re trying to do, unless you’re playing Turn-Based. Turn-Based doesn’t really need the reduced Recovery Time, and you don’t want to be Bloodied if possible, so you don’t really need the Weapon Crit damage. 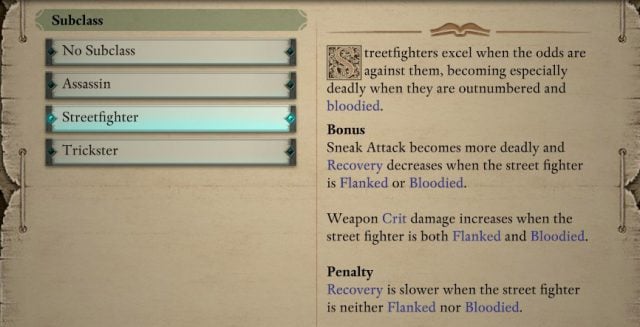 Streetfighters can attack wicked fast when surrounded for increased damage and so are that natural choice here.

As mentioned above the weapon you want to use for this Build is Citzal’s Spirit Lance, because it hits in an AoE for ~50% of the damage to the initial target each time you attack, and has a pretty wide AoE. However, you cannot unlock this Ability until level 13 so you will have to use something else earlier on in the game. Daggers work well because their Weapon Ability increases your Deflection, and using two weapons allows for best results when you Riposte until you get the Lance.

Gouging Strike on all enemies around me.

On the Armor front you can get a way with lighter Armor because of the Wizard buffs, but you’ll probably want at least Light Armor, especially until you gain access to more of these buffs. Enemies will have a very difficult time hitting you later in the game when you can Blind many enemies at once, however, a bit extra Armor doesn’t hurt until then. If you’re playing Turn-Based feel free to wear Medium or Heavy for further protection, as Recovery Time is not as important.

In this section we’re going to cover the “must have” Spellblade Abilities for this Build. You are free to pick and choose which you want outside of these because everyone’s style of play is different and there is no perfect way. However, these ones will be needed for this Build to work effectively.

Mirrored Image – A good way to boost your Deflection because of the nerf to Llengrath’s Displaced Image. Note that they do not stack.

Llengrath’s Displaced Image – This is your go to damage reduction buff for most of the game. It’ll help keep you alive long after you should have died, and it has a very long Duration that is only boosted further by our high Intellect.

Ironskin – Later in the game this will replace Spirit Shield as your go to Armor buff. +5 Armor is nothing to sneeze at and makes you nearly unkillable combined with your other buffs.

Citzal’s Spirit Lance – This spell obviously makes this Build work, so it’s a must have. Take this the second you reach level 13!

Arcane Reflection – This spell makes you reflect spells back at casters, which is just awesome period. Take it and enjoy it!

Wall of Draining – This ability allows you to maintain your buffs even longer, and debuffs enemies at the same time.

Martial Caster – This will help you summon your Lance faster, but not a whole lot faster. Still you can never summon it fast enough, so we take it. Don’t take this if you’re playing Turn-Based.

Blinding Strike – This ability Blinds the target, which puts a ton of debuffs on them. When combined with the Spirit Lance you can Blind all enemies around you in one strike.

Dirty Fighting – This ability increases the likelihood our shots will Crit by 10% if we Hit so we take it. Anything that might increase our potential damage is what we’re after, and Crits do more damage.

Two-Handed Style – This passive will give us a flat 15% damage increase to the Lance which is fantastic. Take this one as soon as you can.

Gouging Strike – This upgrade of Blinding Strike puts a Raw Damage bleed on the targets as well, which further increases our damage.

Riposte – You can’t be a Riposte Tank without this ability so get it as soon as you hit level 10.

Adept Evasion – This further increases your chances of enemies missing you when they attack your Reflex.

Tumbling – This ability will give you +20 Deflection vs Disengagement attacks, which will be useful in triggering more Ripostes if you move around a bit.

Uncanny Luck – Another passive that helps further increase our Crit chance. We take this one because why not?

Deep Wounds – This passive puts a Raw Damage DoT on your target if you strike with a weapon, which isn’t super helpful earlier on in the game, but as enemies start to gain larger Health pools it will help out a lot.

Slippery Mind – This ability gives you Immunity to Mind Afflictions when Bloodied, which you are aiming to be anyhow. This will protect you against all kinds of nasty effects.

Deathblows – Provides +50% Damage against enemies with 2 or more Afflictions. We take this one because enemies will have 2 or more constantly.

Improved Critical – This passive increases our Crit Damage by 10% which we will need. Again anything that increases damage is top priority.

In this section we’ll cover Attributes for the Spellblade, and explain a bit about each and why we need it or why it’s important. Spellblades need Perception, Intellect and Resolve. Perception helps connect on their attacks, which is important to dealing as much damage as possible. Intellect helps with the AoE radius of the Lance’s attack and the long Duration of their buffs and Debuffs. Resolve helps with Deflection which allows you to get more Ripostes. Dexterity is nice, but we can get away with not having much here because of the Streefighter passive. Constitution and Might are not really necessary here, but I wouldn’t dump either of them.

Perception is important for connecting with your attacks. You want to Hit or Crit on every attack you make. Crits will also increase the Duration of the negative effects you apply to enemies which is very helpful. You’ll want this around 15 or so, but higher is always better.

Intellect increases the AoE size of your attacks and is very important because you want to Hit as many targets as possible. In addition, it affects the Duration of all your buffs and the Duration of you debuffs. This is just an all around great stat for this Build. You’ll want this at 15 ish.

Resolve is dumped in nearly every Build out there because it’s just not that good. We use it here to further increase our Deflection by a small amount. Because you shouldn’t be getting hit often, and you gain a damage increase to Crits when Bloodied, its a good idea to keep your Constitution a bit lower than you would on most tanks. However, you can take Constitution instead if you wish.

Human is an excellent choice for this Build because you should be Bloodied sometimes due to average Constitution, even if you aren’t really trying to be. This increases your Accuracy and Damage, which is just an added bonus. Nature Godlike is also a good choice for the increase to Power Level, which helps to improve the Spirit Lance’s performance.

When you are surrounded you want to lead with Gouging Strike if you can. This ability puts Blinded and Flanked on all enemies around you which will give you the Sneak Attack and Deathblows bonus damage against them with subsequent attacks. It also puts 2 Raw Damage DoTs on them, one from Deep Wounds and one from the ability itself. Your next attack should be any other Rogue ability that sets a debuff, to further hamper enemies. 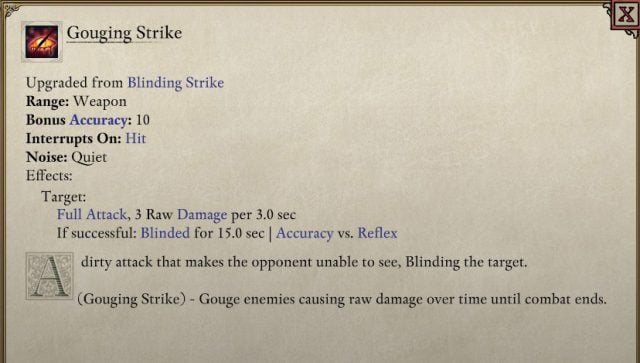 You can Blind all enemies around you with Gouging Strike, which puts a ton of debuffs on enemies, allowing for subsequent strikes to gain the Sneak Attack and Deathblows bonuses.

Abilities or items that increase your Disengagement Deflection are excellent for this Build because you can prompt additional attacks by Disengaging and this should result in more Misses, which further results in more Ripostes. It also allows you to get positioned properly to hit the most targets you can without worrying about getting destroyed in the process. This is why I have Tumbling listed above.

Lastly, not all Deflection bonuses stack and you’ll want to pay attention to which do in order to maximize your performance. For example, Mirrored Image and Llengrath’s Displaced Image don’t stack Deflection, so you will only get the higher of the two values if you use both. Since Llengrath’s Displaced Image was nerfed heavily, you’ll want to cast both of these Abilities, however, in order to gain high Delfection as well as Hit to Graze reduction and increased Reflex defense.

The Deflection bonus of these two abilities don’t stack, so keep that in mind when casting buffs.

Stay tuned for more Pillars of Eternity 2 Build Guides through out May, as we make some more specific Guides covering some of the most fun and interesting combinations we could find. If there is a specific combination you would like to see, please post in the comments and we will do our best to accommodate!