In this Pillars of Eternity 2: Deadfire Build Guide we’re going to be taking a look at the Ascetic Class, which is a mixture of Druid and Monk. I’ll be providing information on Attributes, Weapons, Armor, and most importantly, what Abilities to take and how to use them. Please keep in mind that this is my Ascetic Build, and there are plenty of ways you can build this class, and this is not the only one. If you’re new to Pillars of Eternity 2, or you just love creating characters as much as I do, then this Guide is for you. Please note that this Build Guide was updated for the 5.0 version of the game, as well as 1.02 on console (as of January 20th, 2021), and works with both Real Time with Pause and Turn-Based. 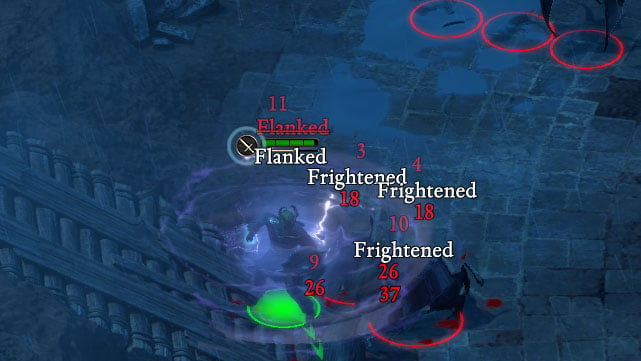 You’ll constantly be frightening and damaging enemies once you gain this ability.

Nature’s Cyclone is a tank Build that focuses on dealing tons of AoE damage, while maintaining its position on the battlefield. The reason it is advised that you play this Build as a tank, instead of a DPS are a few. First, Nature’s Terror is not a Foe AoE, meaning it will hit anyone, friendlies included. Second, Monks need to be hit in order to gain Wounds, and the best way to get them is by being the center of attention for the enemy. And last, enemies need to be grouped up for best results, and enemies tend to congregate around the tank. 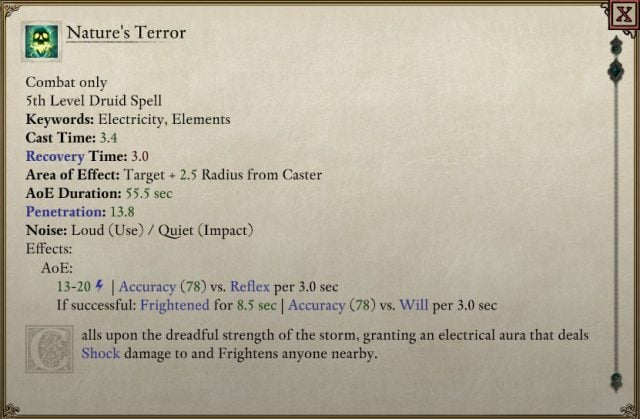 You won’t gain this ability until Level 13, but it’s a game changer.

The way this Build works is that when combat begins you’ll pop Nature’s Terror immediately, and hopefully be surrounded by the time you Cast it for best results. If not, once Cast move to Engage as many enemies as possible and then use Enduring Dance, Thunderous Blows and finally Blade Turning. The idea here is that every round Nature’s Terror will deal massive AoE damage, while you are immune to melee attacks, only having to worry about ranged enemies. You’ll have tons of Intellect and Might because of Duality of Mortal Presence, and the Helwalker Subclass, increasing the Range and Damage of your AoE.

For my Druid Subclass I chose Fury for the increased Penetration and Range with Druid Elements spells. This will help ensure Nature’s Terror Hits enemies and gets through their Armor. Note that you don’t need to Spiritshift for this Build, and usually it’s not a good idea to since you lose access to your Shield, which helps protect you from Damage.

For Monk I chose Helwalker because it increases the Damage we deal with each Wound we have. Since we want to hold as many Wounds as possible to increase the Radius of Nature’s Terror and Rooting Pain, this synergizes extremely well. Since Blade Turning makes us virtually immune to melee damage, all we have to worry about is ranged attacks, negating much of the extra damage that Helwalkers would normally take. Between Duality of Mortal Presence and this Subclass you’ll have good Range and great Damage.

What Weapon you wish to use is largely unimportant for this Build. You can use your Fist, which works exceptionally well in most cases, but look for One-Handed Weapons that enhance this style of play. For instance, Kapana Taga increases your Engagements by +1, which is a weakness for this Build, so is not a bad choice. Or you could use the Griffin’s Blade, which increases your damage with Spells for a more efficient Nature’s Terror.

Armor-Wise you’ll want anything that increases your Engagements, such as: Contender’s Armor or Reckless Brigandine. Or you can use Deltro’s Cage which increases the Power Level of Electricity Spells by +2, further enhancing Nature’s Terror. You can even Enchant it to heal you for 50% of the damage you deal 2x per rest if you need some emergency healing. 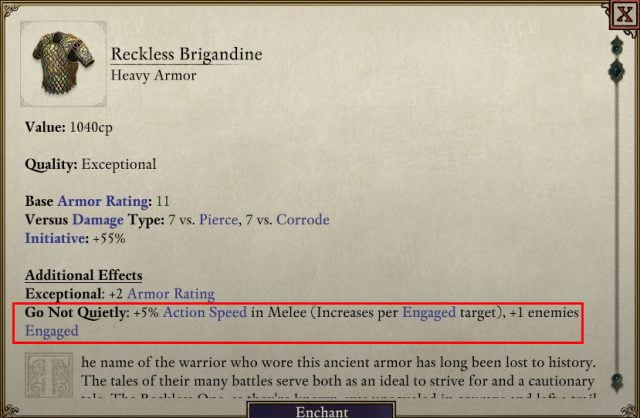 In this section we’re going to cover the “must have” Nature’s Cyclone Abilities for this Build. You are free to pick and choose which you want outside of these because everyone’s style of play is different and there is no perfect way. However, these ones will be needed for this Build to work effectively.

Swift Strikes – Take this one during Character Creation to speed up your Casting and Attacking. You don’t really need this ability, but it’s a waste not to use it.

Lesser Wounds – This will allow you to build up Wounds faster, which allows you to increase your Might more quickly because of the Helwalker Subclass.

Weapon and Shield Style – This passive increases your Deflection and Reflex defense, helping to reduce the damage you take.

Dance of Death – This will grant you some Wounds immediately, but will allow you to gain them regularly as long as you are not struck. You won’t use this much since you’ll be Hit often, but you need it to get Enduring Dance so we take it.

Mortification of the Soul – A great way to gain Wounds in exchange for Health. You’ll need this much more often in the early parts of the game, but it will become obsolete later on.

Blade Turning– This ability redirects melee attacks to nearby enemies, or even themselves, preventing melee damage. With this constantly active all you need to worry about is ranged attacks.

Duality of Mortal Presence – This will allow you to gain up to +10 Intellect per Wound, increasing the Radius of Nature’s Terror as well as the Duration of Blade Turning.

Enduring Dance – This upgrade of Dance of Death will allow you to take a few hits before it wears off, make it viable. Use this to help maintain Blade Turning.

Thunderous Blows – This ability gives us +5 Might and +2 Penetration for only 3 Wounds. It’s a great way to further boost damage and use up some Wounds, since you gain them very easily.

Rooting Pain – This ability can deal damage in an AoE around the Monk every time they gain a Wound. More AoE damage is good and you’ll gain Wounds quickly, so this makes you even more deadly.

Taste of the Hunt – This ability is a great way to deal damage and heal at the same time, which is perfect for a tank. It’s a Primary Attack, so works best on those Two-Handing or using a One Handed Weapon and Shield.

Beetle Shell – This ability works great for protecting you once you’ve cast Nature’s Terror. It prevents you from doing anything, so is not ideal, but Nature’s Terror will continue to AoE even when it’s used. Blade Turning is a better option, but it’s not a bad panic button when Blade Turning just isn’t cutting it, so I advise taking it.

Heart of the Storm – This passive will further boost the Penetration of Nature’s Fury and any attacks you may do if you Spiritshift. It’s a no brainer.

Combat Focus – You don’t want to be Interrupted when Casting Nature’s Terror so you’ll want this one to prevent that from happening.

Nature’s Terror – This ability is what allows this Build to work, so it’s a must. Terrifying enemies and hitting them like a truck happens every turn once cast, allowing you to do whatever you want on your turn and still deal substantial damage all around you.

Farcasting – Adds +20% Range to spells. Useful for this build because Range is something you cannot have enough of.

In this section we’ll cover Attributes for the Nature’s Cyclone Build, and explain a bit about each and why we need it or why it’s important. This Build needs a mix of Intellect, Constitution and Might. Perception doesn’t hurt either to improve Accuracy, but Resolve and Dexterity are not needed, regardless of what game mode you are playing in.

Intellect helps with the Duration of Nature’s Terror, Blade Turning and Thunderous Blows, but also increases the Radius that Nature’s Fury and Rooting Pain strike in, making it a must for this Build. I recommend placing at least 15 points here, but more does not hurt.

Constitution is second because you will take increased damage from being a Helwalker Monk, and we need a larger Health pool so we don’t die from it. How much you want to spend here will partly be determined by your group’s make up, but I would put at least 5 points in it (15 total Constitution). More is of course better if you have points to spare.

High Might gives us a modest increase in damage, and since Nature’s Fury doesn’t deal a ton of damage on its own, every little bit counts. It’s last on our list because you will gain 15 Might from Helwalker and Thunderous Blows, so you won’t exactly we suffering. You can even max Intellect and Constitution if you want, but a few points here is good.

When using the Nature’s Cyclone you want to position near the ranged units, so that melee move towards you, and you hit the most amount of targets possible. It’s not always easy to do, since you can’t always get there in time, but it’s the ideal scenario. Try not to worry about it, but get there if you can.

When using this Build you want to equip items that increase your AoE Range, and items that increase your Engagements. Because you are not using a Class that can increase its Engagements with an ability, you will need to do so via a Shield and other items. This is important, or enemies will just break off and attack your other characters, which you don’t want to happen. Luckily there are several pieces of equipment that do just this, many of which are mentioned above, though there are more. 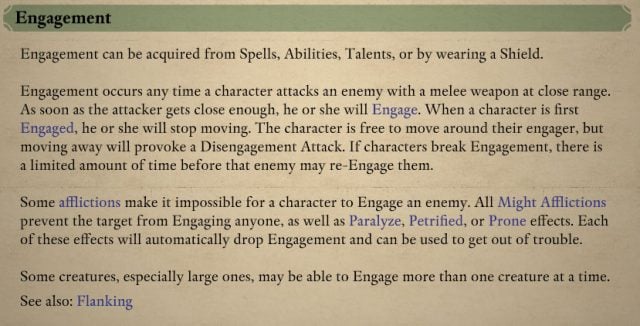 Engagements are important for Tanks because it prevents enemies from getting to your squishies.

This Build works best with as few melee characters in your party as possible. This is because Nature’s Terror is not a Foe Aoe, so it will hit other friendlies and you want to avoid this. You can still play this with other melee units, but it’s challenging to avoid being hit in Real Time with Pause, though it’s not much of an issue in Turn-Based.

Beetle Shell is a great ability to use with this Build when your Blade Turning just isn’t cutting it and you’re really getting into trouble. It will Stun you when you use it, but Nature’s Terror will continue to fire every round, so make sure it still has a decent Duration left before you pop this. You don’t want it to run out while you’re in Beetle Shell and just sit there and do no damage at all.

Stay tuned for more Pillars of Eternity 2 Builds as we celebrate the Ultimate Edition launch on PS4 and Xbox One.