In this Pillars of Eternity 2: Deadfire Build Guide we are going to be taking a look at a Cleric, which is a Fighter and Priest Multiclassed character. The focus of this Build is on the newly added Priest subclass called Woedica, which introduces new spells to the mix. I’ll be providing information on Attributes, Weapons, Armor, and most importantly, what Abilities to take and how to use them. Please note that this Build Guide was updated for the 5.0 version of the game, as well as 1.01 on console (as of January 22th, 2020), and works with both Real Time with Pause and Turn-Based.

This build is a combination of Tank and Debuffer, and is just one of many ways you can build around the new Woedica subclass. I find this combination very powerful and useful for the team because it utilizes everything at its disposal to heavily debuff enemies while Tanking, filling 2 roles with one character. Typical tank builds don’t do much except stand and take hits, but this one is the complete opposite. Not only does it do a lot more, it’s much more dynamic. 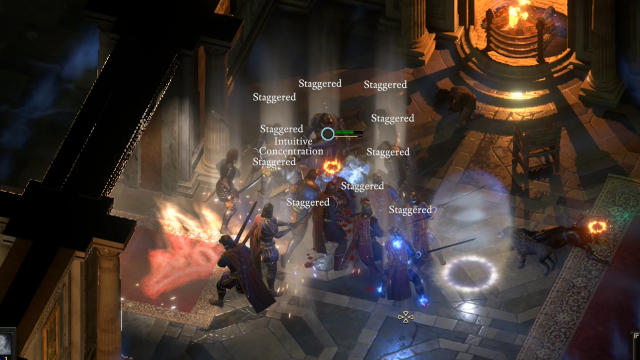 This build focuses on high survivability and debilitating enemies.

Priests of Woedica gains 5 new spells called Writs, and each Writ puts different AoE debuffs which last for a good amount of time. These Writs vary from Afflictions such as Staggered, to enemies not being able to use abilities or spells of any kind. It is a very powerful subclass if used correctly, however, when Multiclassing we lose access to Writ of Mending. Fighter is a great Multiclassing option because it increases survivability and its abilities grant Concentration, amongst other benefits, which is very important since we are casting in melee range all the time and getting interrupted can be problematic otherwise.

For this particular build we will dump Might since we are not doing any damage that would matter. We do some healing through Second Wind, but it is going to be boosted through Athletics so no need to pump points into Might just because of that. Every other Attribute is important though. Constitution increases max Health and Fortitude, Dexterity decreases Recovery and increases Spellcasting speed (but is not needed in Turn-Based), Perception increases Accuracy so that we can hit with Writs and everything else, Intellect increases Will Defense, Duration and the AoE size of spells and Resolve decreases hostile effect duration, increases Deflection and Will Defense. Perception is the most important Attribute for this build because we want to affect as many enemies as possible with the debuffs, and we do not want to miss with Spells since usage is limited. Intellect is second most important Attribute because it increases duration of those debuffs. 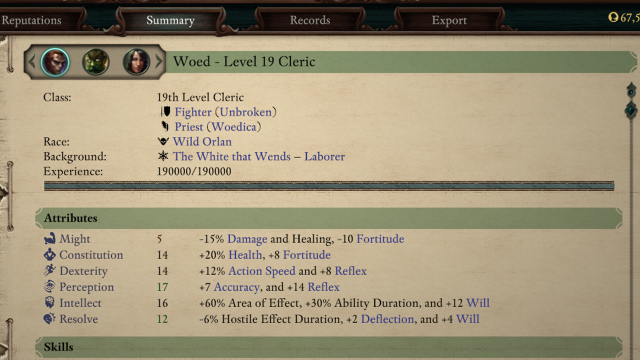 Any Race that has some defensive bonuses is a good choice for this build to increase surviveability. Nature and Fire Godlike are also good but only if you do not have Beast of Winter DLC because Helm of the Void is perfect fit for this build. Here are some good Race choices for this build (remove Might bonuses if they have any, and put them into something else):

Since this is a tank build that does not do any significant damage, it is important to focus on having Armor and Shield upgraded at all times. The best weapon choice would be a Dagger or Spear because of their Modal abilities. Daggers trades Damage for Deflection and Spears trades Stride for additional Engagement. If you can get something that additionally decreases Recovery that would be great so that you can cast Spells more frequently. You’ll want to use a Medium Shield for this Build because of the penalty to Accuracy that higher Shields inflict. Medium is fairly balanced since it gives +8 to Deflection and only -4 Accuracy. Most Shields are fantastic so it does not matter that much which one you choose. I went with Nerian’s Ward because it reduces damage received as Health is lost and it converts attacks into less dangerous versions of them (15% Graze to Miss, Hit to Graze, Crit to Hit). 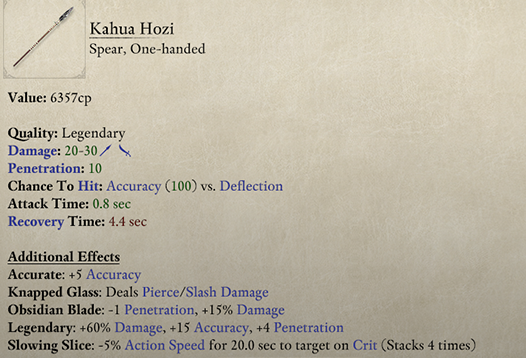 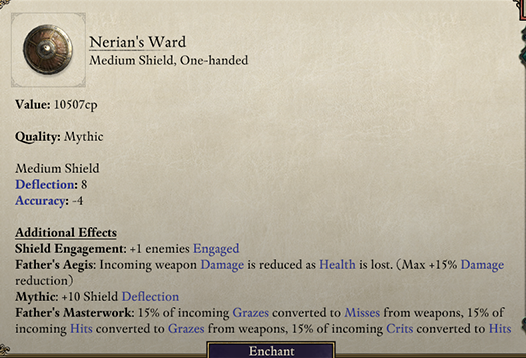 Armor of choice for this Build is some sort of Heavy one. Tanks need the most protection so its a no brainer. Both Crimson Panoply and Patinated Plate are great choices, but you can use others if you wish. Helm of the White Void is highly recommended because it gives +10 Accuracy to any Mind or Body affliction attack. All Writs fall into that category! 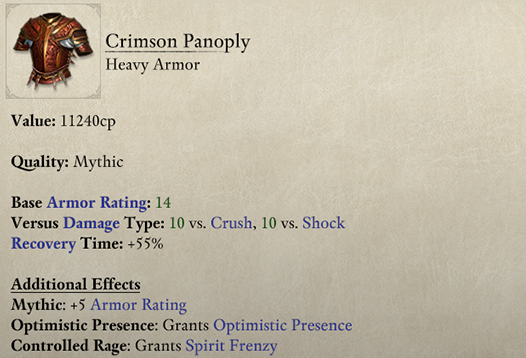 As for other items go for anything that increases Perception and Intellect. Torc of the Falcon’s Eyes adds +2 Perception which is very good, especially since we are using a Shield which decreases Accuracy by default. This is a good item to offset that. Another item that is very good for Tanks in general is The Undying Burden. It grants Second Wind, +2 Constitution and incoming weapon damage is reduced as Health is lost.

For this build we need to have the Fighter abilities Tactical Barrage, Unbending Trunk and Refreshing Defense. Unbending and Refreshed Defense are fantastic for increasing surviveability and Tactical Barrage puts both the Aware and Acute buffs which increase Perception and Intellect by 5 and add +1 to Power Level.

Priests have many spells at their disposal but points should not be wasted much on those. We already have Writs and besides those nothing else is needed except Barring Death’s Door. It is better to use remaining points on passives that would increase defense in one way or another. There are lots of useful Spells, however, you are likely to have another Priest in the party that is dedicated healer and can use all those Spells. Choosing a couple from the available ones is ok, but don’t go overboard.

Tactical Barrage – Grants Concentration, as well as the Aware (+5 to PER, 50% of Grazes converted to Hits) and Acute (+5 PER, +1 Power Level) buffs. Its a perfect fit because it boosts Perception, Intellect and it grants Concentration as well. Upgraded from Disciplined Barrage.

Conquerer Stance – When Hurt or above, get +5 to Accuracy. When Bloodied or below, get +5 to Deflection. Both bonuses are needed for this build.

Refreshing Defense – Adds +20 to all Defenses and grants Concentration. A fantastic defensive ability that lasts longer the more we get hit. Usually needs only 1 cast per combat since it lasts a really long time on Tanks. Upgraded from Vigorous Defense.

Unbending Trunk – 33% of damage received converted to Healing. What more is there to say about this, it heals you when you get hit, making it perfect for a tank.

Rapid Recovery – Health regeneration that activates when combat starts and lasts for a long time. One of the best overall Abilities any Fighter can have, but particularly useful to tanks.

Determination – Adds +20 to all defenses against Intellect, Perception and Constitution afflictions. Overall a great defensive passive, and passives are nice to have because they take no managing whatsoever.

Bear’s Fortitude – Adds +10 to Fortitude defense. With such low Might, Fortitude is our weakest defensive stat so this passive becomes very important to reduce the deficit.

Fearless – Increased Resistance against Resolve afflictions. Another great passive that simply makes us harder to kill.

Superior Deflection – Adds +4 to Deflection defense. While this might not seem like a lot, Deflection is an all or nothing proposition, so having the highest value you can will make the difference.

Armored Grace – Reduces Armor Recovery Penalty by -25%. It is not flat decrease. Instead Heavy armor that has +55% Recovery will now have around +42% Recovery instead, which isn’t quite as good, but still effective. This is not necessary if you are playing Turn-Based.

Unbreakable – Revives you when you die with 100 Health, +10 to all defenses and +2 to Armor Rating for 30 secs. An amazing ability that should be taken for any build using the Fighter class because it can turn defeat into a victory.

Barring Death’s Door – A great ability that prevents dying for a certain amount of time. Works best with high Intellect builds which increase its Duration, like the one we are running.

Spell Shaping – Lets you increase or decrease the AoE size of Writs and other AoE Spells at the cost or benefit of Power Level. The smaller the AoE, the bigger Power Level bonus you get. With a bigger radius, Power Level is decreased. Just be careful not to hit allies with Writs.

Rapid Casting – Adds +10% Action Speed with Spells. Very useful since we cast a lot of them.

At the start of each battle use Refreshing Defense and Tactical Barrage. These will boost your survivability, chance to hit with spells and increase the Duration of spells. Both have instant cast times so you are wasting no time doing so. Then begin casting Writs.

Writ of Engagement is fantastic against pretty much everyone because it reduces Might by 5, meaning less damage and healing done. Cast other Writs as well, since enemies can have multiple active debuffs at once. Thanks to high Intellect they will last for around 30-40 seconds, which is a good amount of time. Unbending Trunk is used when you drop to about 40%-50% health. In addition, we have 2 Second Wind abilities (if using The Undying Burden belt), which can restore a significant amount of Health if you have high Athletics. And lastly, Unbroken is there in case we die, despite all the other things keeping us alive. None of this matters though if you simply use Barring Death’s Door that prevents dying in the first place.

This build is effective throughout the game as long as you have good equipment that provides decent defensive bonuses. Writ of Engagement is available at level 1, as is Disciplined Barrage. At that point your surviveability will not be high, but as you level up it is going to increase significantly due to various passive bonuses. Make sure you have a Healer in the party though, because no matter how powerful this Tank is, it is still going to need some heals. Especially on Path of the Damned. 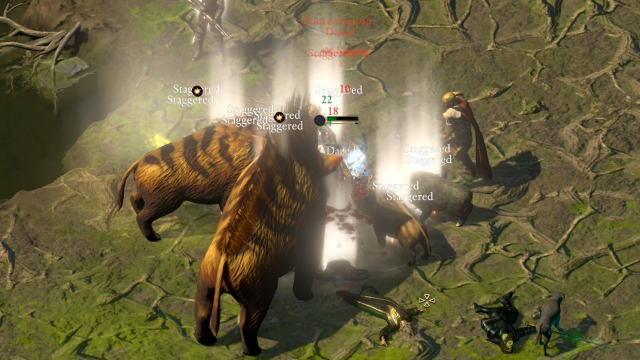 At higher levels dying becomes a challenge even though this is not full tank build.

The Skill I would recommend the most is definitely Athletics. Having Second Wind is a saving grace at times, and the healing amount scales with it. Alchemy is a good choice too but be warned that Attribute bonuses from Drugs and Potions do not stack with Inspiration bonuses. So if you have Minor Avatar it would be useless in that case because only highest bonus would be used.