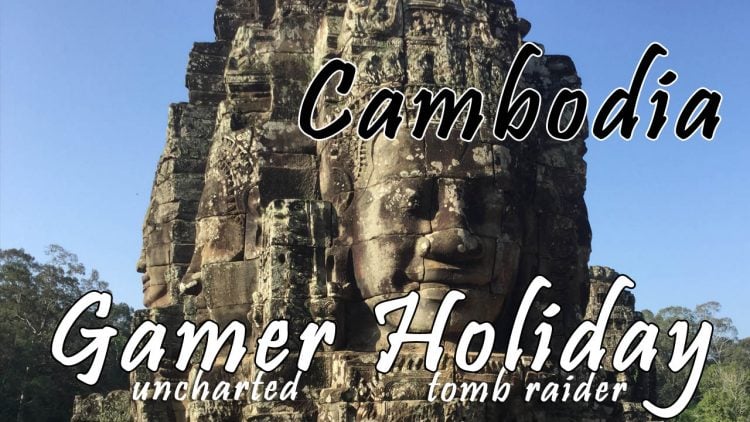 The Perfect Holiday for a Gamer? How about exploring ancient runes of lost civilizations whilst visiting the inspiration sites of some of your favorite games? Siem Reap in Cambodia takes you back to the Angkorian Empire so you may Tomb Raider your way around whilst feeling just like Nathan Drake in Uncharted – with a bit of Argonian Style Elder Scrolls!¹

This series of articles will guide you a detailed 7 day itinerary as a Siem Reap Holiday Guide. We assume 1 day is spent traveling so you can schedule 6 full days of actual activities.

Perfect gamer holiday for your honeymoon, anniversary, or any special occasion worth the expense. I’m adding this to my once-in-a-lifetime trips, so budget accordingly!

Siem Reap 7 Day Tour Guide: Get your Tomb Raider on!

You can also go to our other articles for this series:

If you like this content, you may also be interested in our Tolkien Tour of Oxford, our visit to Sapporo Brewery, or our pre-Gamescom Switzerland visit

A Quick Introduction to Cambodia

The current Kingdom of Cambodia is located in South-East Asia, and used to house one of the most impressive and largest empires in the region and the world, the Khmer or Angkorian Empire. 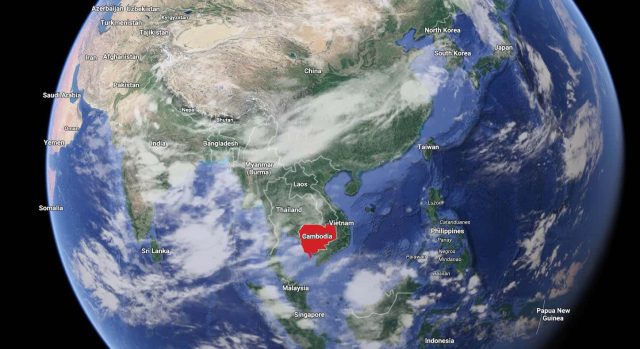 Cambodia lies in between Thailand and Vietnam, and on a popular trading route between India and China

Located in-between China and India, it thrived from trade and plunder from 800 AD – 1400 AD. It was the largest urban center in the World with a peak of an estimated 900,000 residents in the capital and 2 million within the Empire. Initially Hindu, the empire underwent a fascinating transition to Buddhism. Both religions coexisting peacefully and eventually becoming the modern Theravada Buddhism. 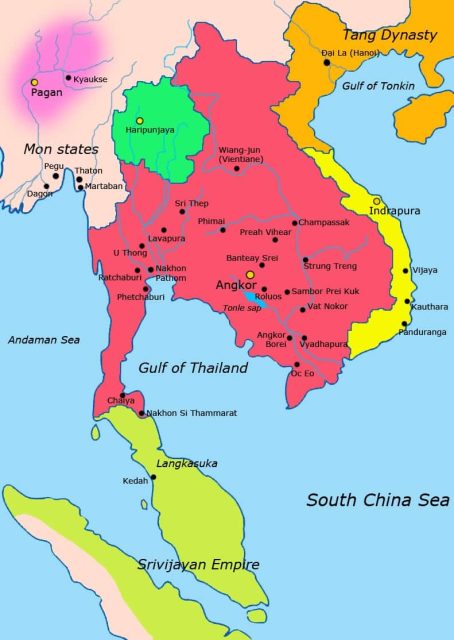 For many reasons explained later, the Empire declined and was overtaken by neighboring Thailand, leading to a “Dark Age”. This was to end with the trade deal between Thai and France that gave the French control of the country in 1863. The French period was actually good for Cambodia, and population rose by about 5 times – while the French begun the restoration processes that are still ongoing to this day. 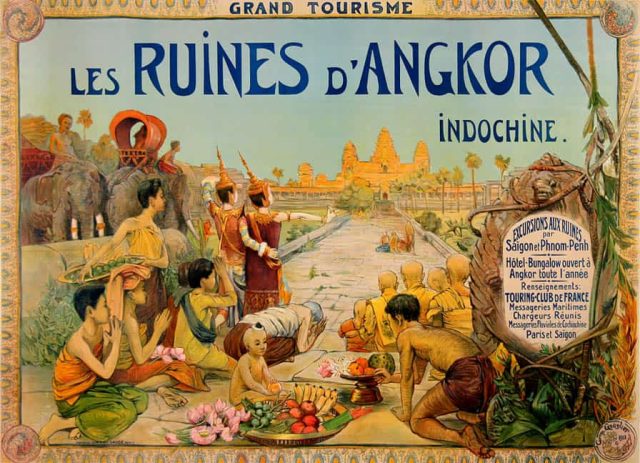 In 1953, King Sihanouk convinced the French to give “French Indochina” its independence, and the Kingdom of Cambodia was formed as a constitutional monarchy. He would go on to give Kingship to his father and move to politics, attempting to remain neutral during the Vietnam War and the Cold War.

Because of his neutrality policy, he was displaced by a bloodless military coup when he was out for a state visit in China in 1970. The coup government was anti-communist and gained the support of the US. This immediately triggered the Viet-Cong to begin armed attacks on the Northern Cambodia border as they feared for their power. King Sihanouk attempted to regain power by calling the population to rise on his behalf, giving rise to Cambodia’s Civil War. 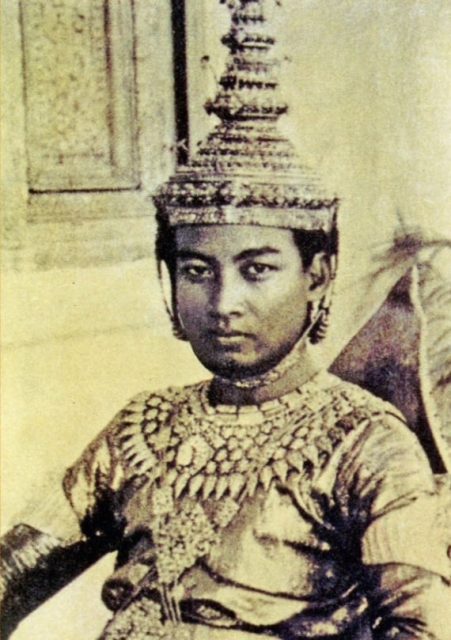 King Norodom Sihanouk during his coronation in 1941

Local communist group (now known as “Khmer Rouge” and led by a man named Pol Pot) took control of the country in 1975. They attempted to follow Mao and set forth “communist agrarian socialism“, ordering people out of the cities and using them as forced labor in the fields.

“Intellectuals” and such “elite” where then massacred, and during this bloody period 95% of Cambodia’s Buddhist temples were destroyed. Doctors, lawyers, teachers and priests were executed. Religious and cultural art performances and dances forbidden. During their mere 4 year stay in power, 3 million Cambodians were tortured and murdered. That’s almost 50% of the Cambodian population at the time! 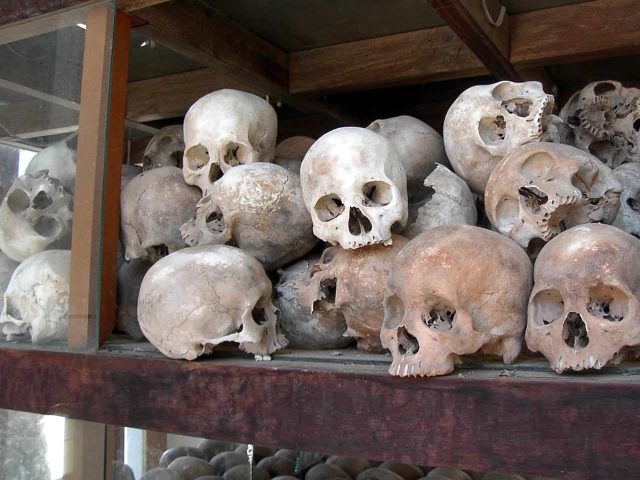 Execution grounds and mass gravesites are now a permanent mark on Cambodia, alongside the piles of skulls left behind by the Khmer Rouge

In 1978, as a result of incursions into Vietnamese territory by the Khmer Rouge regime, Vietnam retaliated and successfully invaded Cambodia. The Vietnamese established a new government made of ex-Khmer Rouge members who had been exiled by their own party before the invasion.

Unbelievably, defeated Pol Pot loyalists formed a Khmer Rouge coalition government in exile with King Sihanouk. Because of this allegiance, the exiled government was recognized by the UN. Internal armed conflicts continued for over a decade until 1991, when a peace pact was signed. Following the pact, exiled King Sihanouk was finally restored as the monarch in 1993, and Cambodia has slowly been crawling out of its post-war devastation and hunger ever since. 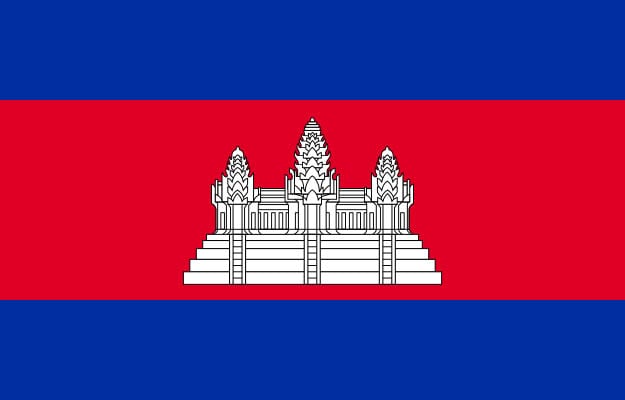 Modern Cambodian Flag, featuring the Angkor Wat temple, and the only flag to use a man-made structure as its centerpiece

Now that you know more about the setting of the country, you are ready to embark on our tour! We’ll be visiting Hindu and Buddhist temples, enjoying local food, despairing at the visible results of the war and musing on the future of this amazing place.

Articles for this series:

If you like this content, you may also be interested in our Tolkien Tour of Oxford, our visit to Sapporo Brewery, or our pre-Gamescom Switzerland visit