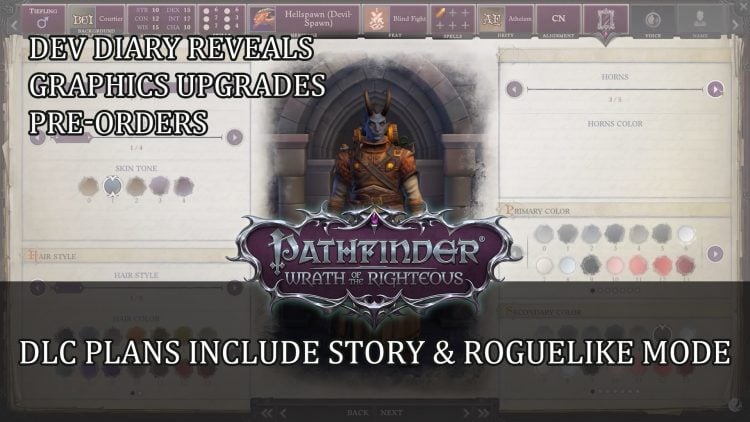 Developer Owl Cat Games have released their fourth developer diary video for Pathfinder Wrath of the Righteous which shares details about the upgraded graphics of the game plus new details released about DLC plans.

Pathfinder Wrath of the Righteous developer Owlcat Games has released new details about downloadable content for the upcoming game. The developer will release two story DLCs and a roguelike mode DLC which will be included in the Season Pass.

The initial DLC will focus on new adventures that players can embark upon after the victory over the Worldwound, leaving Golarion behind. The DLC will use “mythic powers to defend the space-time continuum against imminent collapse”.

The second DLC will feature a brand-new story that takes place during the main campaign. Together with the other survivors, players will reach the last foothold of the crusader forces. Using scarce resources and your own skills to survive.

The third DLC will bring a new roguelike mode with partial integration into the main campaign, offering “limitless replayability” according to the press release.

The fourth dev diary focuses on the graphic features of Pathfinder which include:

You can check out the full Dev Diary 4 below:

Pre0rder are now available with three editions to choose from. You can also pre-purchase the Season Pass for $19.99 which will include all DLCs. The full game costs $49.99. You can also get the Mythic Edition which will include the base game, Season Pass and Commander Edition which includes bonuses such as artbook and digital world map.  You can check out the full details of each below:

Pre-order bonuses for any edition:

Pathfinder: Wrath of the Righteous will be released on September 2 on PC. PlayStation and Xbox versions will land before the end of 2021.

For more news find it here in Tales Of Arise Gets Lifestyle Feature Video & Screenshots and Rumour: Dragon Age Netflix Series In Development.