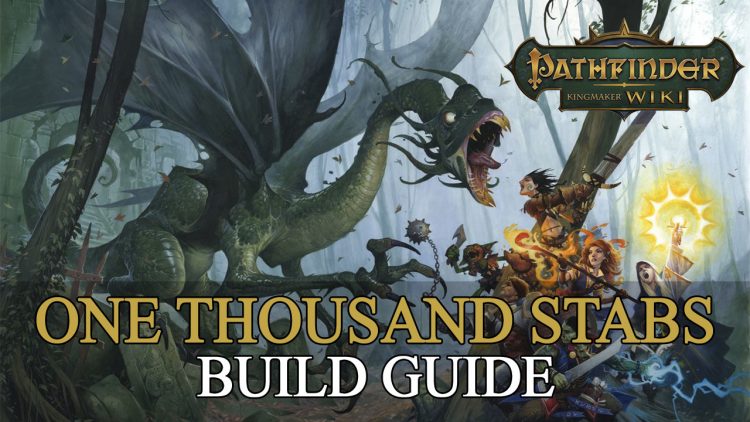 In this Pathfinder Kingmaker Guide we will take a look at a hybrid Build consisting of Monk, Knife Master and Fighter. It is a very powerful melee build that is based around hitting an opponent as many times as possible in one round, and hitting hard while at it. 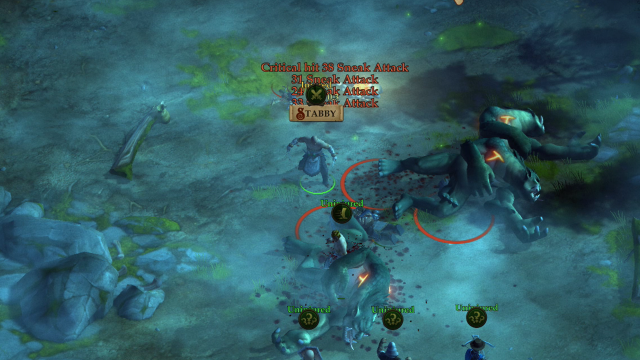 This is equivalent of having a machine gun in your hands

In this Build we will Multiclass a Rogue Knife Master, Monk and Fighter. The idea is to do as many attacks with 2 Sai weapons in one round as possible. Sais are needed because it is the only weapon that works with the Sneak Stab passive from Knife Master, and Flurry of Blows from Monk, since Flurry of Blows only works with weapons a Monk is proficient in. At level 20 with this build we will do 9 attacks per round, and that number goes up with Haste and Ki Power: Extra Attacks. This is an absolutely insane number of attacks, and although some will miss, it is still huge damage per round.

Monk gives us abilities such as Flurry of Blows and Ki Power: Extra Attacks which add more attacks per round. They also add Ki Power: Barkskin to increase Armore Class and Unarmed Combat, which is great against opponents that have high resistance to the Piercing Damage from Sais (Unarmed attacks do Bludgeon Damage). 11 levels in Monk are enough to get the most out of Flurry of Blows and Monk Class. 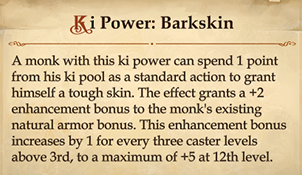 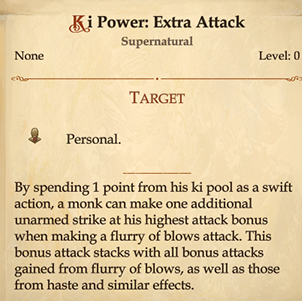 Knife Master is a great addition to Monk because of all the Sneak Attack bonuses, and the specialty of Knife Master is called Sneak Stab. It is a fantastic passive that grants Sais an increase in damage with Sneak Attacks by increasing the die to 1-8 damage instead of the usual 1-6 damage. The downside is that every other weapon does reduced damage which is 1-4.

The next important ability is called Finesse Training (Sai). It is acquired at level 3 and it adds DEX to damage rolls instead of STR. With 4 levels into Knife Master we also get 2 Sneak Attack bonuses, Accomplished Sneak Attacker, Uncanny Dodge and Debilitating Injury. Especially useful is Bewildered Injury because it reduces the AC of enemies that have been struck by our Sneak Attacks. Considering that most of the attacks are going to have a reduced Base Attack Bonus, this makes enemies much easier to hit. 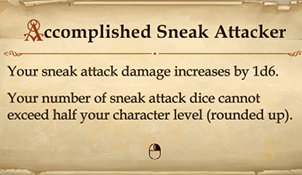 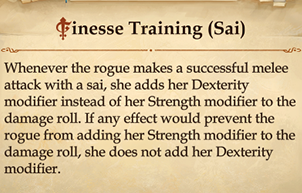 Fighter is an optional Multiclassing option here, but one I went with because of all the additional Feats we get even with only 5 levels into Fighter. Also we get Weapon Specialization (Sai) which adds 2 damage to our attacks. Weapon Training cannot help us, unfortunately, because the devs forgot to include Monk Weapons as an option (so no Sais there). If you do not want Fighter, put those levels in Knife Master or Monk instead.

With 11 levels into Monk we get these feats and abilities automatically:

With 4 levels into Knife Master we get these feats and abilities automatically:

With 5 levels into Fighter we get 3 bonus feats which is always nice. You can choose which you want, but Weapon Specialization Sai should be one of them.

WIS and DEX are the primary attributes for this build. Both modifiers are added to AC, which is important for survivability because Monks can’t use Armor, if they do not want to lose all the bonuses. DEX is added to damage with Finesse Training (Sais) and attack rolls. I have added 2 points into CON just to add more Health Points. There is 1 more point left and I have put it into STR just to help with team encumbrance, but you can place it somewhere else if you wish. 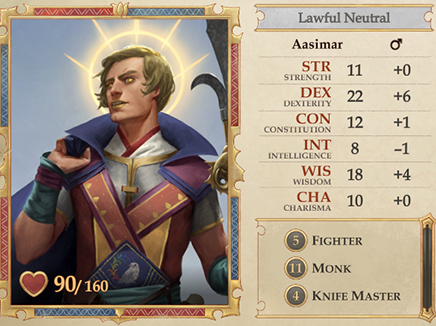 Skills that start with boosts are Lore (Nature), Lore (Religion), Use Magic Device, Perception, Trickery and Mobility. Mobility is highly recommended to avoid attacks of opportunity when running around the battlefield striking enemies, but the rest can go in which ever of these you want. 3 Skills in total can be leveled to maximum with this build. 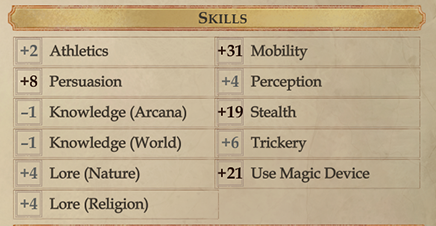 The best Race for this build is Plumekith Aasimar because the +2 bonuses to DEX and WIS is just too good to pass up. In addition you get the Wings feat at level 10 (don’t forget to choose it from Feats). Even further, they also receive Celestial Resistance (acid, cold and electricity resistance) and the Light Halo activated ability that adds +2 to saving throws against Blinded and Dazzled.

Feats we want are any that help with Two Weapon Fighting and attack bonus. Outflank is an extremely important one to have, but that also means that you need someone on your team with that same feat fighting next to you. Outflank should be on every team anyway since it is the best teamwork feat for melee characters.

Here is a list of feats we are taking for this build:

Monks receive Ki Powers instead of Spells, there aren’t many you can choose from, and some are more useful then others for this build. I have already mentioned Barkskin since it is extremely good, and it raises AC by 4 at Monk level 9. Wholeness of Body and Restoration are nice additions to give yourself a healing ability and a way to deal with negative levels annoyance. 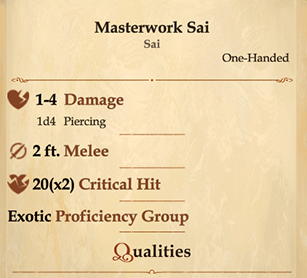 Monks do not use any armor and it should remain so, that way we do not lose Flurry of Blows and other bonuses. 2 Sais are weapons that we need. One can be purchased at Oleg’s Trading Post and starting with 1 level in Monk gives you 1 Sai equipped. For the rest of the items go with anything that increases AC, saving throws, damage and attack rolls. Ring of Protection is great in this instance since it stacks with Barkskin. If you do not have the Cat’s Grace and Owl’s Wisdom spells on anyone in your party then definitely go with Belt of Dexterity and Headband of Inspired Wisdom. Remember that the same bonuses from Spells and items do not stack.

The Thousand Stabs build is extremely easy to play. Before the fight use Ki Power: Barkskin, someone from party should cast Cat’s Grace, Owl’s Wisdom and anything that adds to attack bonus on you, then activate the Bewildered ability and position the character next to anyone that has Outflank, and go to work. An extremely high number of attacks, with Sneak Attack applied to every single one, is a whole lot of fun to play. If Sais do not work against a particular enemy, switch to Unarmed to do Bludgeon Damage instead. 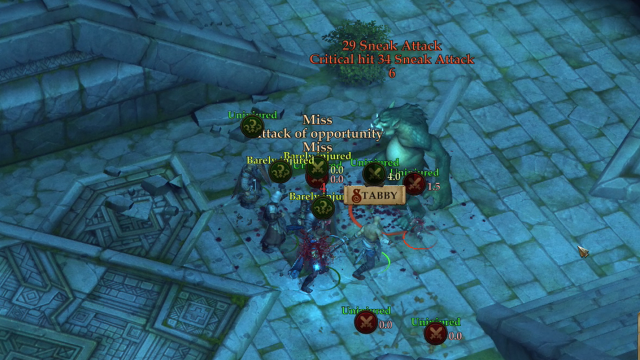 Scaled Fist Monk is also a good choice to Multiclass, but if you choose to use this one, then pick Musetouched Aasimar as a Race, and put points into CHA instead of WIS. This offers additional boosts to Unarmed attacks but it won’t do anything to Sais.

More Pathfinder Kingmaker content is coming soon, including Class and Build Guides, so stay tuned! You may be interested to read our Tower Shield Tank Valerie Build Guide, Jaethal Grim Reaper Build Guide, Octavia Arcane Trickster Build Guide, Amiri Barbarian Build Guide, Ekundayo Ranger Build Guide, Linzi the Bard and our Beginner’s Guide. In the meantime you can check out the wiki for all your Pathfinder needs.