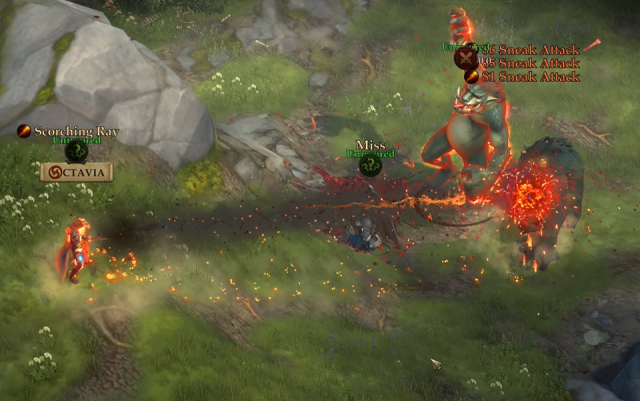 Ray Spells are the focus of this build

This build focuses on using Ray Spells together with the Sneak attack bonus to do massive single target damage, with added AoE damage for good measure. Arcane Tricksters automatically receive the following Feats and abilities:

Octavia also has the Physical Enhancement ability where she can turn on bonuses to either DEX, CON or STR. Before you get Cat’s Grace I would suggest using DEX enchantment and afterwards switching to CON. That way you get bonuses to 2 different Attributes. 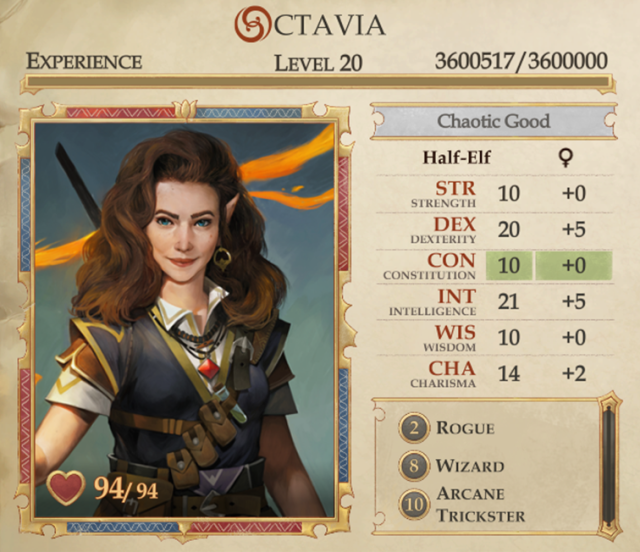 Ignore Rogue 2. Should be only 1 Rank and 9 in Wizard.

Dexterity and Intelligence are the most important attributes for an Arcane Trickster. A Dexterity modifier is added to every Ray Spell attack roll due to them falling into the Ranged Touch  Spells category. Since Intelligence increases the number of spells you can use per day, starting off adding 2 points to DEX and INT is recommended, so that you have the base modifier for both at +5. The last point you get at the game start can be put wherever you want.

There are some skills that are more important then others and you will have enough points to level most of them to high ranks thanks to high INT. Stealth is a good choice to start the battle without enemies spotting you, and it adds the Sneak Attack bonus to your first attack. Knowledge (Arcana) enables you to copy Spells from Scrolls to the Spellbook and can be used to identify magic items and monsters. Use Magic Device lets you use Scrolls and Wands, making it a very good choice. 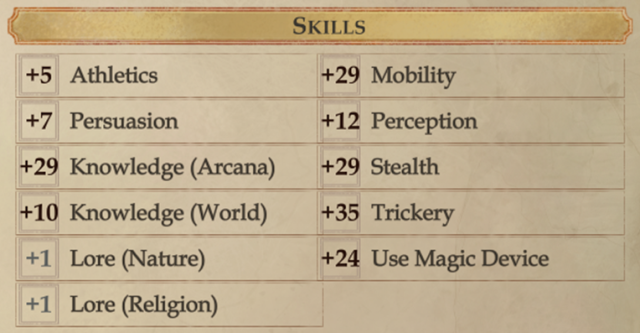 Example of Skills for Octavia. Add points from Knowledge (Word) to Perception to maximize its usefulness.

Due to the Ranged Legerdemain feat, Trickery is fantastic in dealing with traps and trapped chests. Investing 4 points into Mobility is a must because it is a requirement to unlock the Arcane Trickster Class. Perception lets you spot traps among other things, making it an ideal combo with your Trickery setup.

Octavia starts with 1 level in Rogue and 1 level in Wizard. The Arcane Trickster class can be unlocked when all requirements are met. Follow these tips to maximize build efficiency.

Besides Accomplished Sneak Attacker, these are the most important feats to get:

There are many amazing spells to chose from but we will focus on Ray Spells. Ray Spells are Ranged Touch Spells that can strike an opponent once or multiple times. Octavia starts off with 3 Ray Spells: Acid Splash, Ray of Frost and Jolt. These are great starting spells because they have infinite uses. However, the 3 most powerful spells for this build are Scorching Ray, Hellfire Ray and Disintegrate. 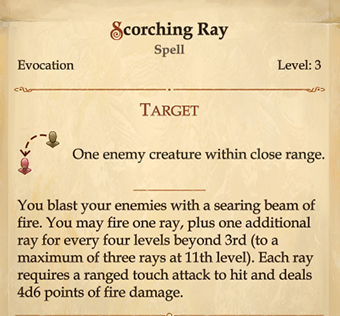 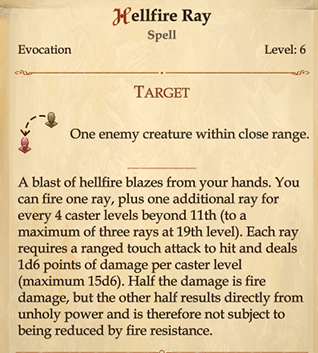 Hellfire Ray is just an upgraded Scorching Ray, and they both strike your opponent multiple times while adding your Sneak Attack bonus to damage for every ray. Disintegrate hits once but it hits very hard, usually killing an enemy instantly. 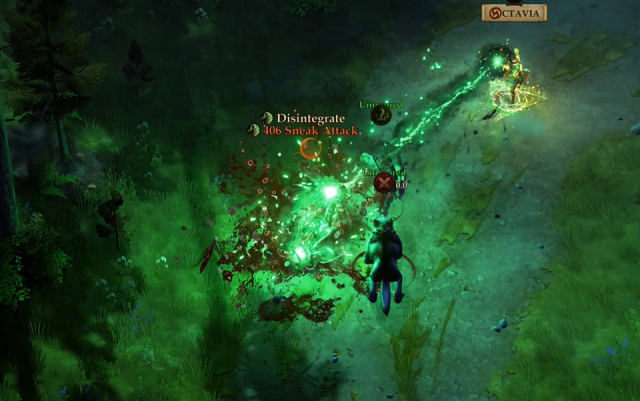 Disintegrate is a very powerful spell

An important thing to know is that only Ray Spells can benefit from Sneak Attack until Arcane Trickster level 10 is reached, and the Surprise Spells feat is acquired. With Surprise Spells any spell can add your Sneak attack bonus to its damage. I have also added these damaging spells to the build but feel free to switch for anything you like. 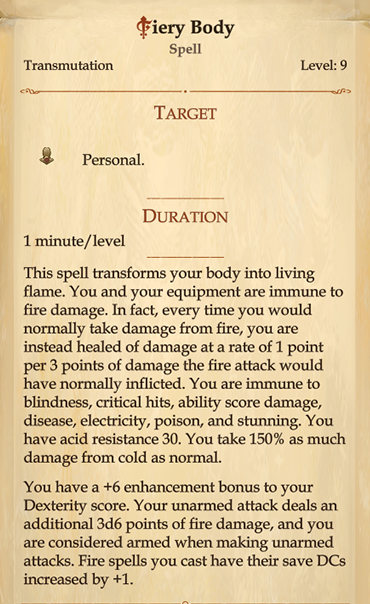 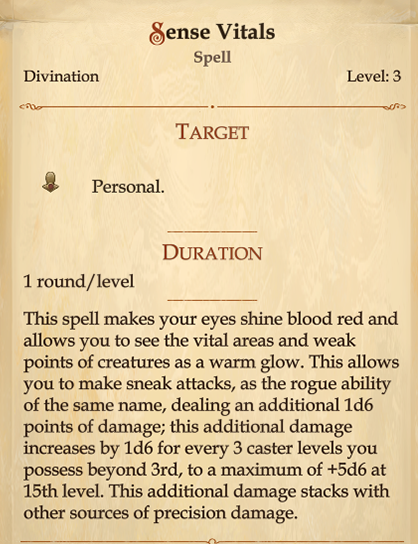 There are many amazing buffing spells for this build and some of them apply to allies as well. Before reaching level 9, you can opt for spells like Mirrored Image, Cat’s Grace (Mass), Bear Endurance (Mass), Haste, Heroism (if there is no one else who can use this spell) and Reduce Person. These will help you out tremendously.

Upon reaching level 9 you get to use Fiery Body, an amazing buffing spell. After that you should get Heroic Invocation and Haste on top of Sense Vitals and you are ready to roll. Here is a list of all non-damaging spells you should take but feel free to add anything you like:

To “metamagic” any spell, open your Spellbook and click on the bottom right where it says Metamagic. From here you can choose any spell and increase its levels by Empowering and/or Maximizing it. 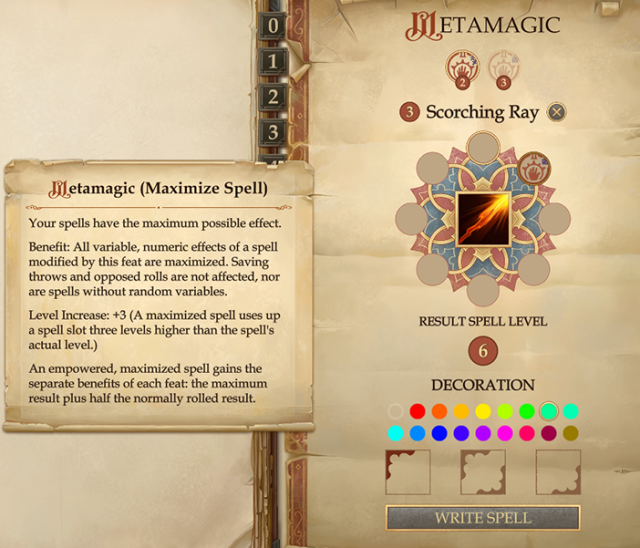 Metamagic is an important feature for this build

Adding levels to spells means you need to slot them into a higher level slot. For example, Hellfire Ray is a level 6 spell and if Maximize is used, it will become a lvl 9 spell. It will then need to be slotted under lvl 9 spells in your spellbook.

Arcane Trickster Octavia is a powerful DPS build that can kill enemies instantly due to the stacking Sneak Attack bonuses and increased level of damaging spells amongst other things. Having someone in your party that can cast Heroism and Heroic Invocation is recommended, so that you save that lvl 9 slot for any of above mentioned spells.

Remember that Sense Vitals always stacks with the normal Sneak attack bonus, so make sure you are always doing normal Sneak Attack damage by focusing flanked enemies, using Impromptu Sneak Attack or attacking after going into stealth by using the spells Vanish, Great Invisibility and the Invisibility Thief ability. 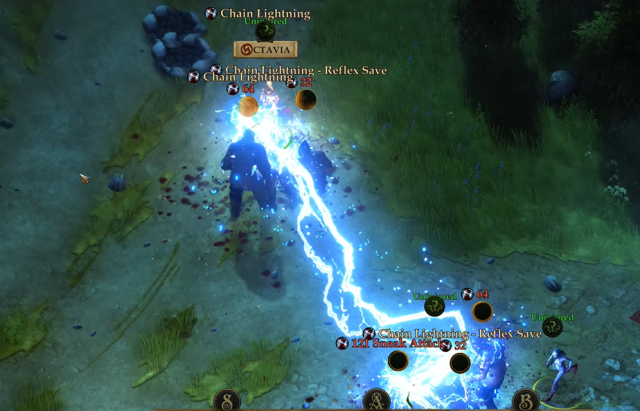 Ray Spells are not the only ones powerful with this build

Wizards have wide variety of spells to use so add whatever you feel like would be a good choice. Nothing here is set in stone besides Ray Spells.

Thank you for reading and enjoy the build!

More Pathfinder Kingmaker content is coming soon, including Class and Build Guides, so stay tune! You may be interested to read our Tower Shield Tank Valerie Build Guide, Jaethal Grim Reaper Build Guide and our Beginner’s Guide. In the meantime you can check out the wiki for all your Pathfinder needs.

One comment on “Pathfinder Kingmaker Builds: Octavia the Arcane Trickster”