In this Pathfinder Kingmaker Guide we will take a look at Jaethal, an undead elf. She is a standard Inquisitor, a divine caster class with lots of versatility. This build will however, focus on the simplest of routes and that is using 20 levels in Inquisitor and impersonating the Grim Reaper with a Scythe as our preferred weapon. Because Jaethal is Undead, she has different features, which include being able to heal from negative energy spells such as Inflict wounds, while taking damage from positive energy spells like Cure Wounds. This build guide is aimed for beginners and for anyone else that needs their memory refreshed regarding certain mechanics. 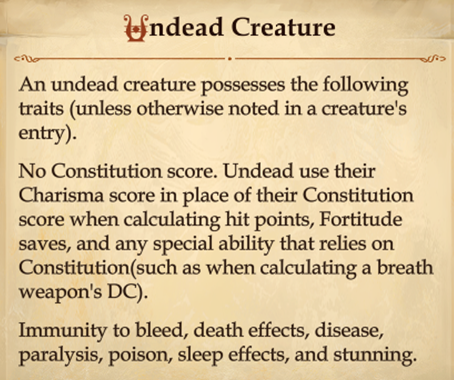 This build focuses on melee combat and the many buffs Inquisitors have at their disposal, that can benefit themselves and allies either through Feats or spells. Although not as good as some other classes DPS-wise, we can work around it a bit by choosing DPS oriented Feats. Before we delve into Feat choices however, let us have a look at which abilities Inquisitors get automatically.

Jaethal has a balanced attribute spread that makes her great for multiclassing. For the purposes of making this build as simple and as effective as possible, we will add all our additional points to STR to get more bonuses to damage and attack rolls. She already has +3 from WIS which is enough and it helps to hit with True Judgment because it adds WIS modifier to attack roll. 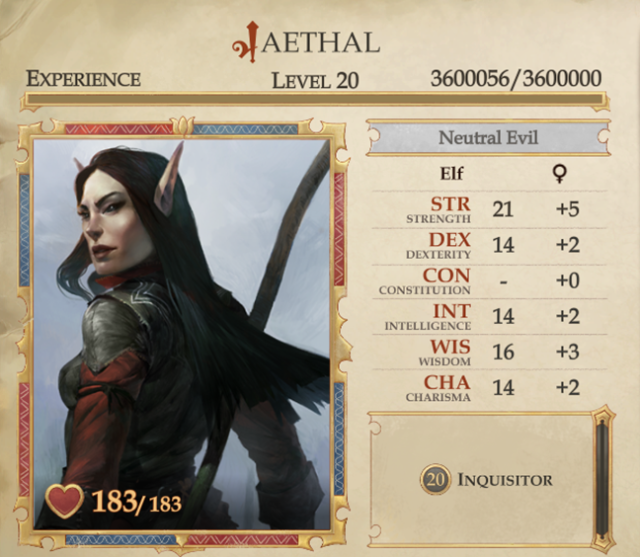 Due to Stern Gaze feat, I would recommend pumping points into Persuasion and Perception, which can help a lot in conversations as well as to spot traps, enemies and other hidden things. Persuasion is especially important if you take the Dazzling Display Feat. Mobility is always a good choice for melee characters in order to prevent Attacks of Opportunity while running around. Jaethal has bonuses to Lore (Religion) and Knowledge (Arcana), so it would be wise to level those two as well. 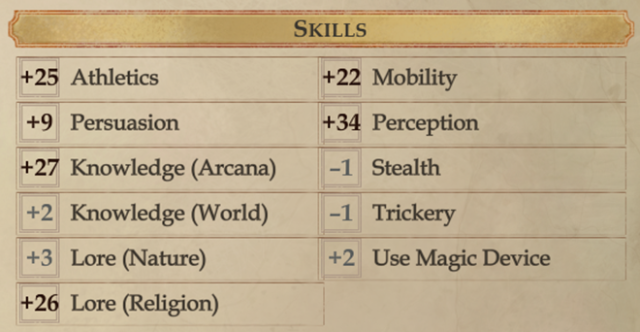 Inquisitors get an extra Teamwork Feats every 3 levels and all of those bonuses add up, making Inquisitor quite powerful when adjacent to an ally. When leveling up Jaethal, focus on choosing normal Feats as there are not that many great ones for this build outside of these. As for which to choose, we are going to pick everything that can help us to improve her DPS. I have included Vital Strike but it seems to be bugged causing it not to trigger at all. This is expected to be fixed in a future patch, but if you do not feel like dealing with Vital Strike go for Extra Bane and Dodge. 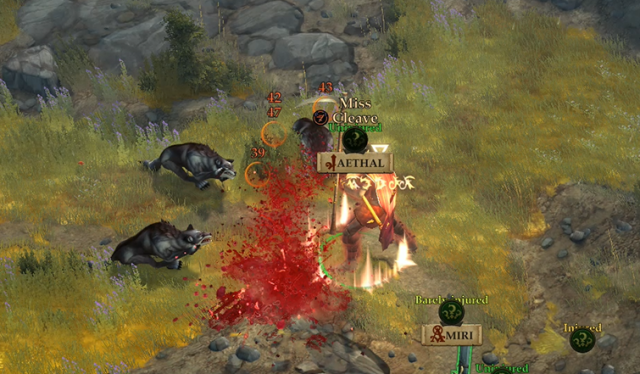 Cleave is very good and fun to use.

Inquisitors have a wide variety of spells, but with this build we are going to stick with Buffing and helpful team spells. Offensive spells will not be as good with this build because we are focused on melee combat anyway, which requires a different Feat and Attribute spread. Here are my choices but feel free to add whatever you want if you feel like it would be beneficial to your build. 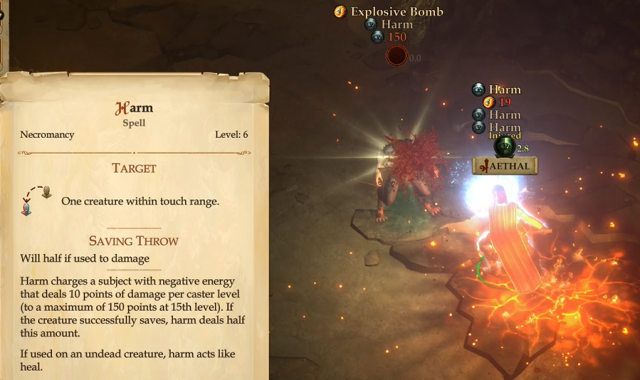 With these spells you can buff yourself and allies, remove negative status effects, heal yourself and do damage with Harm, which always does at least half of  the maximum damage even on a successful Will saving throw. Some of the buffing spells will overwrite themselves, but you will still keep some bonuses. You should always cast before combat starts: Freedom of Movement, Spell Resistance, Stoneskin, Heroism, Divine Power and Righteous Might. That will increase your damage and survivability dramatically. Stoneskin requires Diamond Dust to be cast, which can be purchased from Clerics at the capital. Dispel Magic is amazing because it removes beneficial effects such as Concealment from enemies, making them much easier targets.

Scythe is the favored weapon of Jaethal’s Deity and it fits the Grim Reaper theme. Deity Favored Weapons do not add any bonuses to attack rolls or damage while using said weapon, but you get automatic proficiency with it. 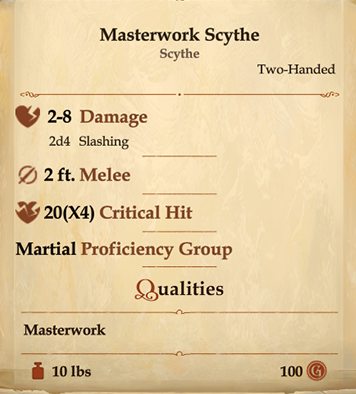 Scythe has an insane critical hit modifier of x4, meaning if you crit, the enemy dies in most cases. The problem is that it has 20 as its Crit Range, meaning it doesn’t Crit as often as you’d like, however this can be improved to both 19 and 20 rolls with the Improved Critical Scythe Feat. The scythe is optional and can be switched for other 2H weapons.

Strength is our primary attribute so something like Belt of Giant Strength is a perfect choice because it stacks with Righteous Might bonuses. Adding any item or buff that increases Wisdom is also a good choice, because the Wisdom modifier is added to True Judgment. 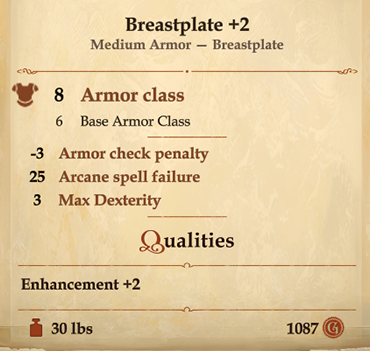 Armor should be the best medium armor you can get. Arcane Spell Failure does not affect Jaethal because Inquisitors are divine casters and armor check penalty is not that detrimental. Medium armor offers a good amount of AC, without restricting her too much.

This build makes Jaethal a really good melee inquisitor due to buffs and teamwork bonuses. Jaethel should always be positioned adjacently to any melee ally, so that she can get bonuses from any teamwork Feat she has, thanks to Solo Tactics.

Before a fight, buff her with spells like Resist Energy, Freedom of Movement, Spell Resistance, Stoneskin, Heroism, Divine Power, Righteous Might and Divine Favor. When the fight starts, activate Judgments Justice, Destruction, Smite and Bane. Justice is the best Judgment for this build, because it adds +1 sacred bonus to all attack rolls (up to 5 at level 20), and at level 10 this bonus is doubled for confirming Critical Hits. If you are level 20 do not forget to activate True Judgment to insta-kill enemies. Note that any Judgment needs to be activated in order to use True Judgment.

After the lengthy buffing and activating of all necessary bonuses at the beginning of the fight, it is time to position yourself next to an ally and start killing everything. There are many on hit and on kill bonuses like additional attacks through Cleaving Finish but to simplify everything, use Cleave versus groups of enemies that are adjacent to one another and use a standard attacks against one enemy.

It would be wise to cast Harm on any enemy since it does a lot of damage even if enemy succeeds at a saving throw, which they most likely will. After the fight Restoration, Remove Negative Effects and healing spells come into play to get the party back to a healthy status. 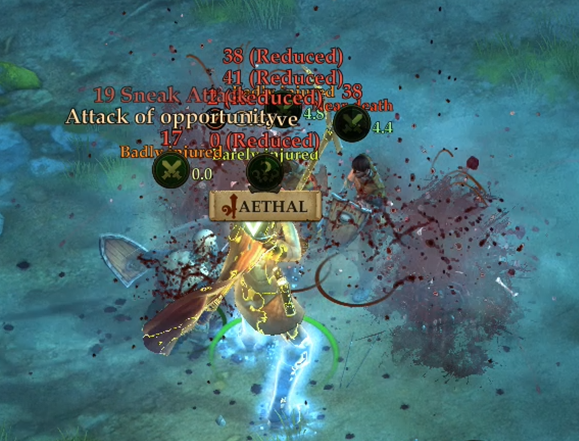 More Pathfinder Kingmaker content is coming soon, including Class and Build Guides, so stay tune! You may be interested to read our Tower Shield Tank Valerie Build Guide and our Beginner’s Guide. In the meantime you can check out the wiki for all your Pathfinder needs.