Pathfinder Kingmaker is complex, punishing and sometimes confusing, even for veterans of the RPG genre. In this Guide I am going to cover some basic things that will help in your early endeavors, and ensure to get off to a good start.

The first thing you need to know is that Pathfinder Kingmaker is based on Pathfinder Pen and Paper rules. There is a lot of depth and complexity in these rules, which can put off many players immediately. The most important thing to know here is that it is a Dice based system, meaning RNG is an important factor because of Dice Rolls. If you fail badly in a certain encounter, that does not mean you will fail a second time, but building characters properly increases better overall score thanks to added bonuses. The same system applies to, let’s say, disarming a trap. Trickery + Dice roll determines if the trap will be disarmed. A low roll can lead to activating the trap instead, damaging everyone around it, even with an significant investment into Trickery.

In this section we will take a look at how attacking, defending and critical hits are determined, and how the dice rolls factor into this. The following are some basic formulas of calculating Attack and Damage numbers: 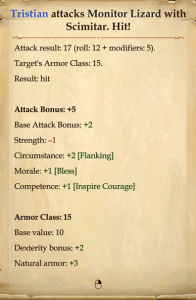 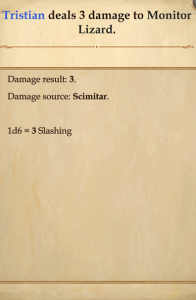 Damage Rolls are based on the Weapon or Spell you are using. These are numbers such as 1d8, 2d6 and so on. 1d8 means roll one 8 sided die (possible outcome 1-8). 2d6 means roll two 6 sided dice (possible outcome 2-12). Attribute Modifier bonus comes from Strength if applicable. Ranged Weapons, cannot have bonus damage from Strength except Thrown Weapons and Composite Bows. The total damage done is then reduced by the enemy’s Damage Reduction stat.

Spells that require an Attack Roll can also Crit if 20 has been rolled. By taking the Improved Critical Feat for a specific School of Magic, a Crit Roll will initiate upon hitting 19 and 20, not just 20 like before. In short, Critical Hit means that you roll your damage more than once, with all your usual bonuses, and add the rolls together. 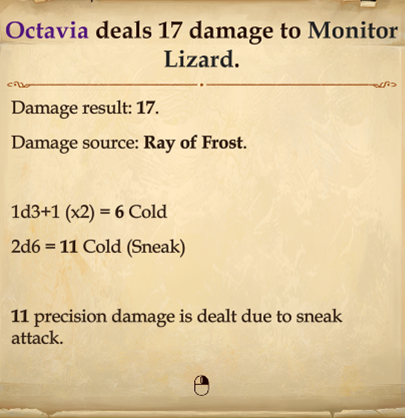 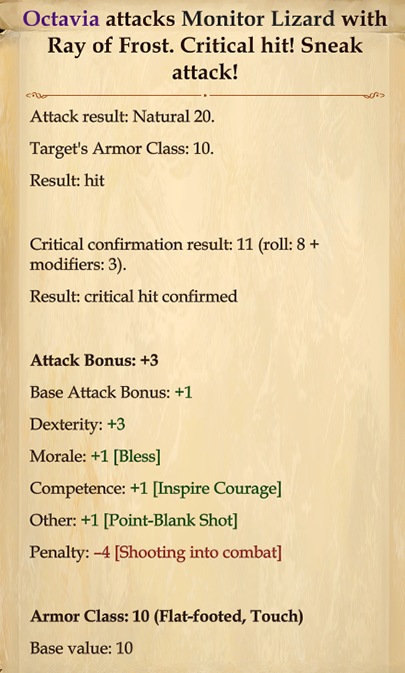 These are all just some basics to begin to understand the complex nature of this game and how some systems work. Checking out the in-game Encyclopedia is a great way to familiarize yourself with game’s mechanics.

Pathfinder Kingmaker is extremely challenging on higher difficulties to the point that is just downright unfair sometimes. Thankfully the Difficulty Option is always there to be changed to accommodate you. Playing on Normal Difficulty or lower is recommended even for more experienced RPG players, at least until you get a full party. The game suffers from balancing issues where one moment you can destroy 15 wolves, and right after a group of bandits will wipe out your party nearly instantly. Adding insult to injury is that you don’t know how powerful your enemy is, and trial and error is the only way to find out. Saving the game as often as possible goes without saying. 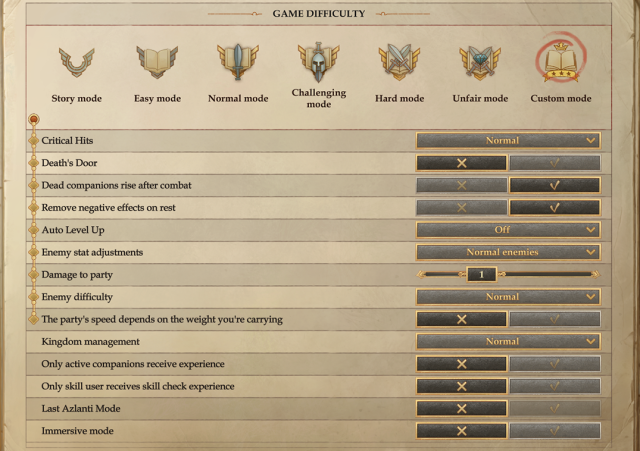 Choosing a pre-made character is not a bad idea if you are new to Pathfinder: Kingmaker because there is no respec option. This will ensure you start out headed in the right direction with regards to character progression. Also sticking to simpler classes like Fighter, Barbarian, Rogue, Wizard and Ranger would be a smart choice for a first playthrough.

There is an option to Auto-level Companions to make your life easier if you are unsure what to do. Once you gain a better understanding of the game, Multiclassing becomes more of a realistic option. There are no real drawbacks to Multiclassing except that for every level put in another Class you lock yourself out of higher level abilities of your primary class. That means if you are playing a Wizard, for example, and decide to Multiclass and put one level into Rogue, you are going to be locked out of level 20 Wizard abilities. Placing 2 Points into Rogue locks lvl 19 and 20 abilities. That is why Multiclassing is for advanced players that know exactly what they want to do with their build, and have a greater understanding of many abilities and how to improve them.

Encumbrance plays an important role in Pathfinder: Kingmaker because it affects Travel Speed, Fatigue Duration and Combat Stats. Your party shares total load, meaning the more party members you have the more you can carry. Picking up every weapon and armor piece will quickly lead to being Overloaded, however, so you should be a bit more picky about what you loot compared to something like Pillars of Eternity. 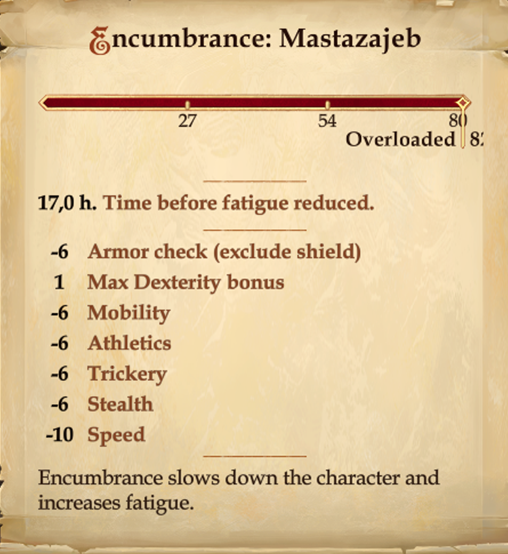 Leave out any heavy objects like Armor and Shields because in most cases they are worth very little anyway. Common items such as a Bone Necklace are worth more then most armor pieces and they weighs almost nothing. These are the type of items you should be collecting and selling afterwards, and item tooltips tell you if it is used for anything other then selling. Also, pay attention to the amount of Camping Supplies you bring, because they weigh a lot as well.

Fatigue is a constant problem that can be prevented to an extent. For example, the Endurance Feat slows down Fatigue and Exertion, but to remove Fatigue, you need to Rest. Resting means setting up camp and assigning roles to protect the camp from surprise attacks, cook meals for bonuses and hunt for Rations. Camping Supplies and Rations can be purchased at Oleg’s Trading Post early on in the game. Before visiting Dungeons it is recommended to buy 12 Camping Supplies which allows for 2 camps inside Dungeons. 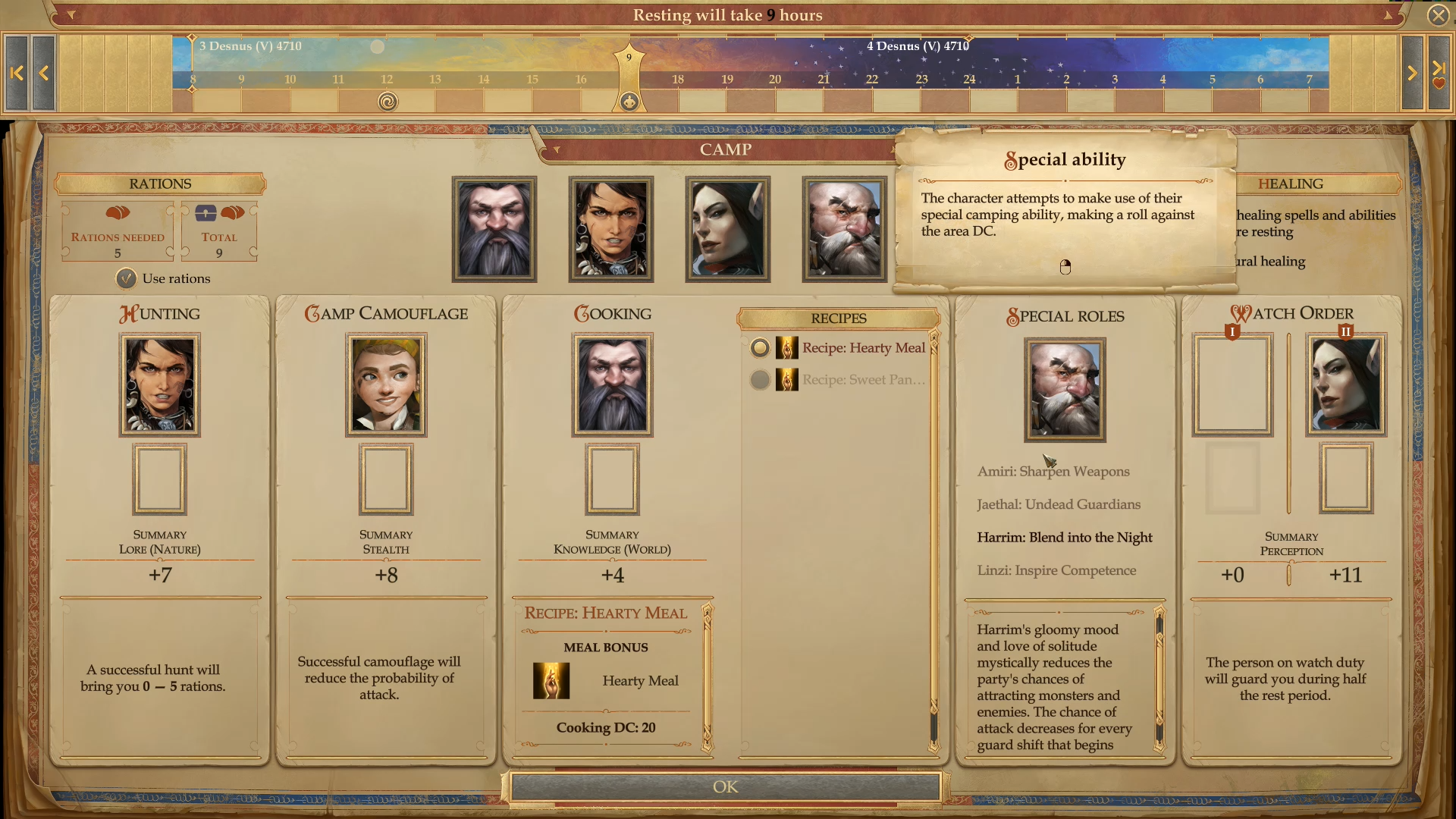 If you do not have enough Rations, every activity besides Hunting will be suspended. Assigning the best people to these activities is tied to their Skills. Someone like Amiri will do fine in Hunting because of her Nature Lore bonus. Anyone with good Perception Skill is good for keeping Watch and spotting enemies in time so that the party is not ambushed. It is a fairly simple process to assign proper duties.

Having a full party as soon as possible is important to make the game easier. That is why rushing Ancient Tomb, Temple of the Elk and Tehnic Encampment is a good choice, in order to recruit new characters. Having more party members helps not only with fighting, but with encumbrance as well, allowing you to pick up more loot.

Combat can be unforgiving at times, and some encounters may prove too be hard to deal with if you do not have proper party setup. That is why the Difficulty Option is there at all times to adjust these settings to tailor the experience to your liking. Reloading encounters is part of the learning experience so be prepared to do that a lot as well. That is sometimes the only way to learn what you are up against.

For example, many players are struggling with the Spider Swarm enemy at the beginning of the game, and for good reason. Spider Swarm is immune to any Weapon Damage and it can be hurt by Fire abilities and Alchemist Fire, both of which are hard to acquire by the time you reach this enemy. Leaving this encounter for later would be the best option in this case, until you have the proper tools to deal with it.

The Combat Log can tell a lot of useful information, especially when dealing with difficult enemies, so check it out frequently to see how high the AC and DR (Damage Reduction) of your opponents are. This will give you some insight into who to prioritize, and whether or not it’s even worth attempting the encounter just yet. 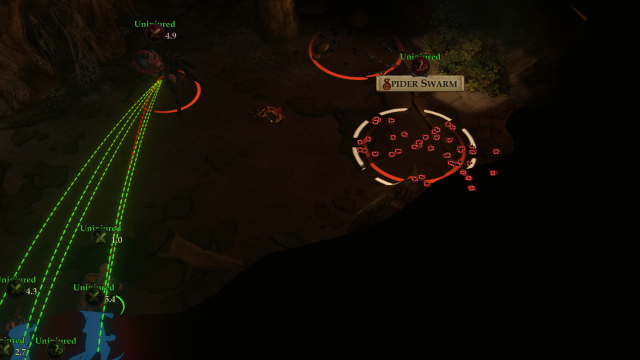 Starting combat prepared and knowing your priorities goes a long way towards coming out of battle alive. Scouting ahead with a Stealthy character and then sending in your Tank first when combat begins, is a great way to get lots of enemies to attack the Tank, so that everyone else can play their role without interruptions. 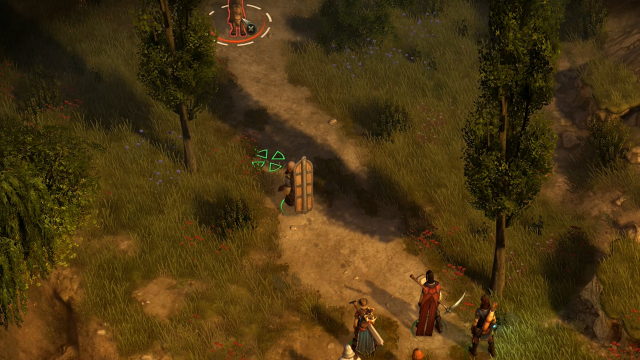 Buffs and Crowd Control abilities are an important part of every fight. Buffs like Bless can be cast outside of combat, so whenever you spot an enemy start Buffing your party with longer lasting spells. That way you won’t have to do it in combat, freeing up time to attack enemies instead. 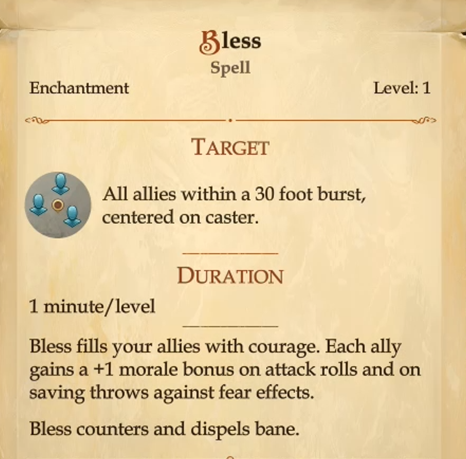 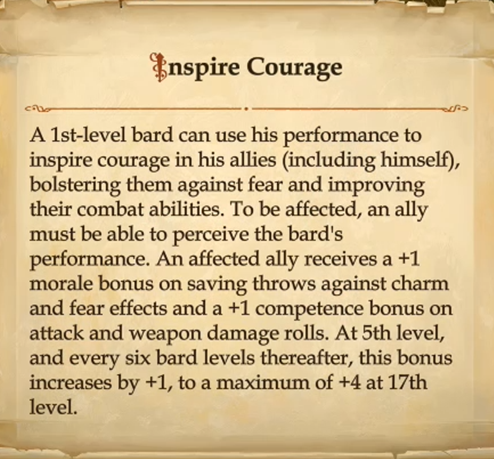 As soon as the combat starts try using spells like Sleep on enemies that you don’t want to focus on right away.  One or two enemies being unable to act for some time means less incoming damage and more focus on targets that are a higher threat.

Flanking is an important aspect of combat because it gives +2 to Hit and activates Sneak Attack. Flanking bonuses are activated when 2 or more adjacent characters are attacking it, so it’s a good idea to focus fire enemies for faster kills.

Ranged attacks, Casting Spells and drinking Potions all provoke Attacks of Opportunity if there is an adjacent enemy. You can use that to your advantage by sending someone like Amiri to deal with Ranged and Spellcaster enemies. She usually makes short work of them, making the rest of the fight much easier.

The same Buffs usually do not stack. For example, 2 different sources that give +5 resistance to fire will not stack. The same goes with Saving Throws. So it would be useless to cast any spells that buff Saving Throws if Cloak of Protection is equipped. However, there are exceptions to this. For example, Paladins and Monks gain a boost to Saving Throws from Attributes that do stack with other Saving Throws boosts. Learn which ones stack and which do not.

It is generally a good idea to get Masterwork Weapons and the Weapon Focus Feat as soon as possible because they give bonuses to Attack Rolls which means more chances to Hit. It is hard to hit anything during the early game, as is typical with most D&D style games, and that is why this is so important. Hitting enemies with more regularity means an easier go of it. 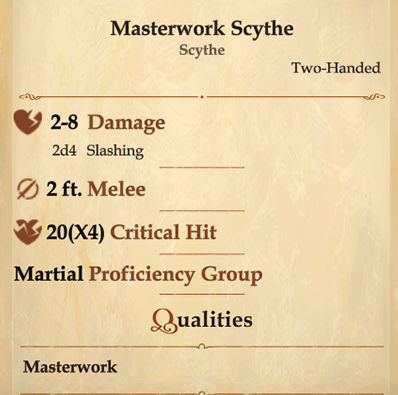 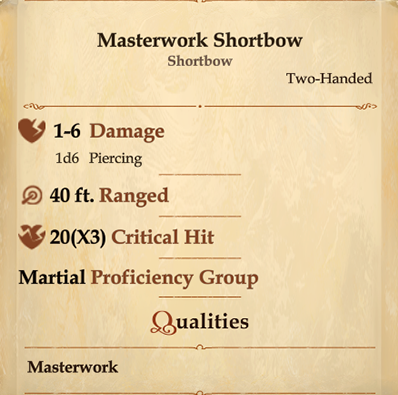 Jaethal is Undead, meaning she cannot be healed by Positive Energy and Healing Potions. Instead she is healed by Negative Energy that would otherwise hurt living things. She can cast Inflict Light Wounds as soon as she joins and that spell heals her. Rest works on her the same as with others so it is the best out of combat option.

Every Spellcaster has access to a Spellbook by pressing B. This is where you prepare Spells. There are Cantrip (level 0) spells, such as Jaethal’s Acid Splash, that can be used at all times, but every other level spell has a limited amount of spells they can use per day. Spells are restored upon resting, much like they are in D&D. 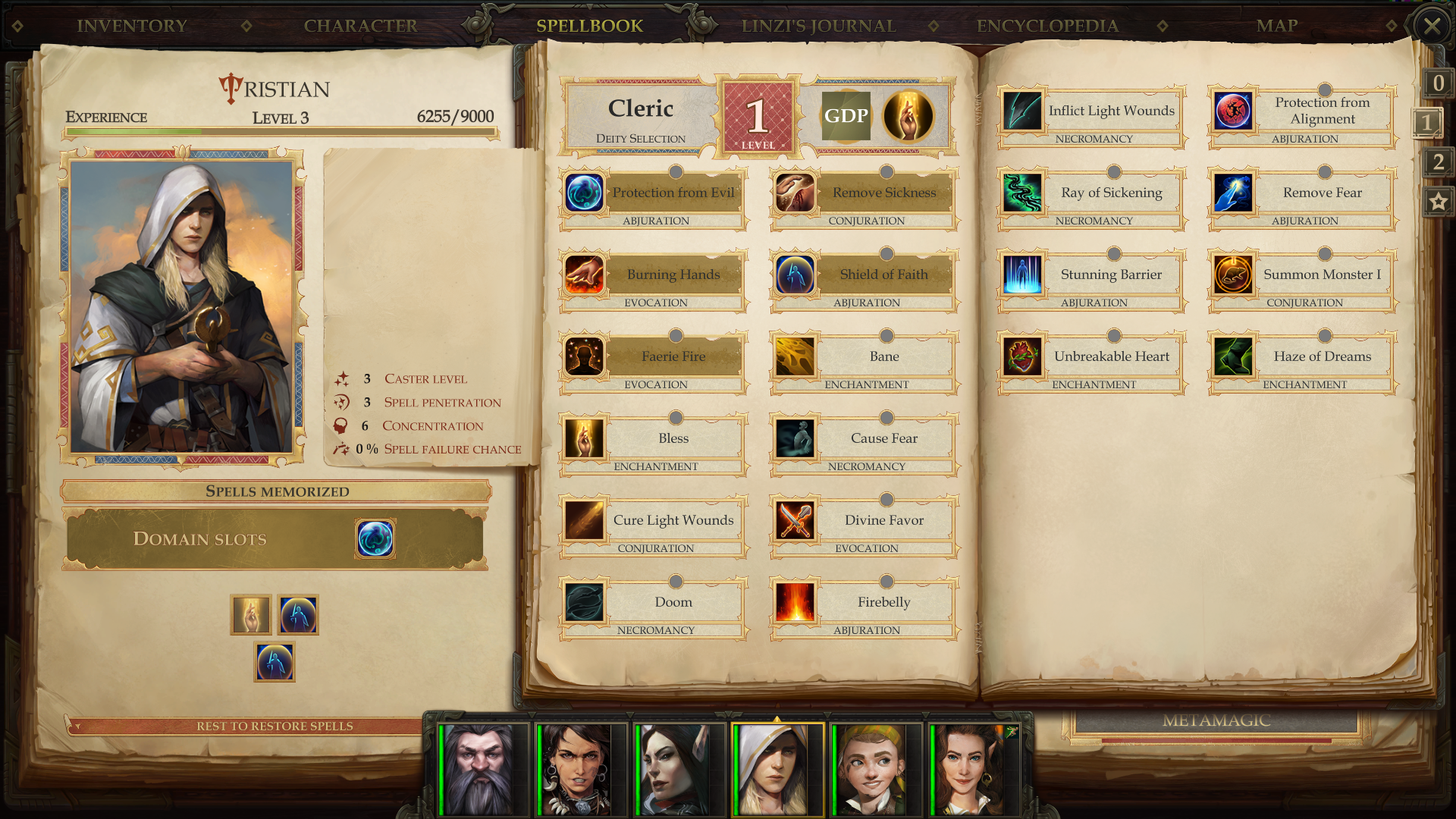 Pathfinder Kingmaker is a very complex and punishing game that requires a lot of difficulty adjustments, reloading, preparation, reading and comprehension. This guide is aimed towards new players so that you start off with some knowledge and to know what you are up against, and obviously this is only the tip of the iceberg. Think about the situation, retry as many times as you want, and if it is not working leave it for later or lower the difficulty. Sometimes RNG just won’t be in your favor and there is not much you can do about it.

More Pathfinder Kingmaker content is coming soon, including Class and Build Guides, so stay tune! In the meantime you can check out the wiki for all your Pathfinder needs.