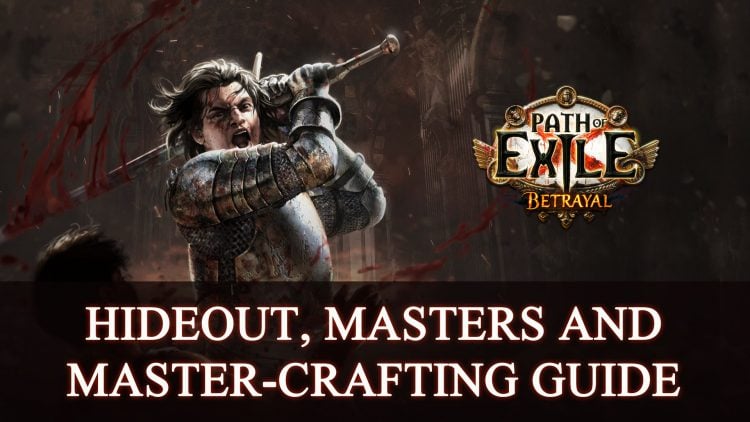 In this article we will cover everything you need to know about Hideouts in Path of Exile. Hideouts are areas where players can decorate, craft and invite masters. There have been changes to Hideouts with the recent introduction of the Betrayal League and many of these changes have been for the better.

Hideouts are unlocked after freeing Helena in Act 2. After that you will need to claim a Hideout by clearing the monsters that inhabit it. There are many different Hideouts with varying tilesets , and these are found in campaign and maps. To change a tileset simply talk to Helena and pick the ‘Select Hideout’ option. 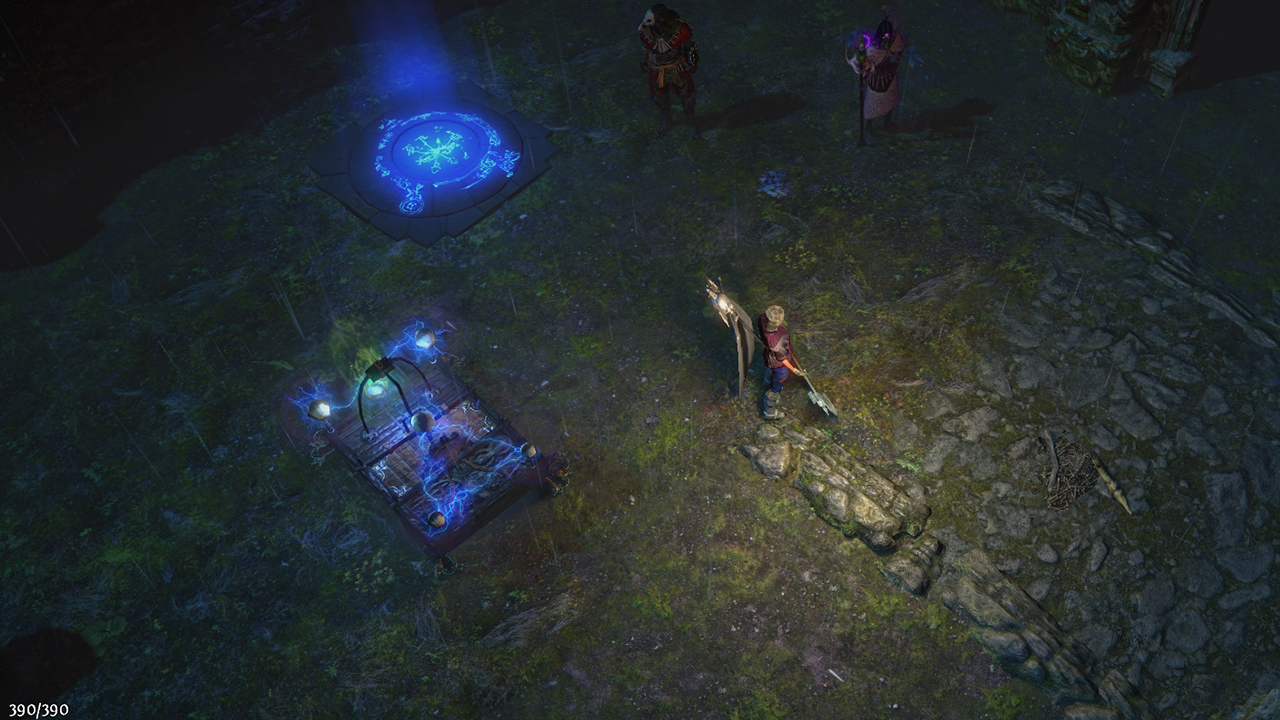 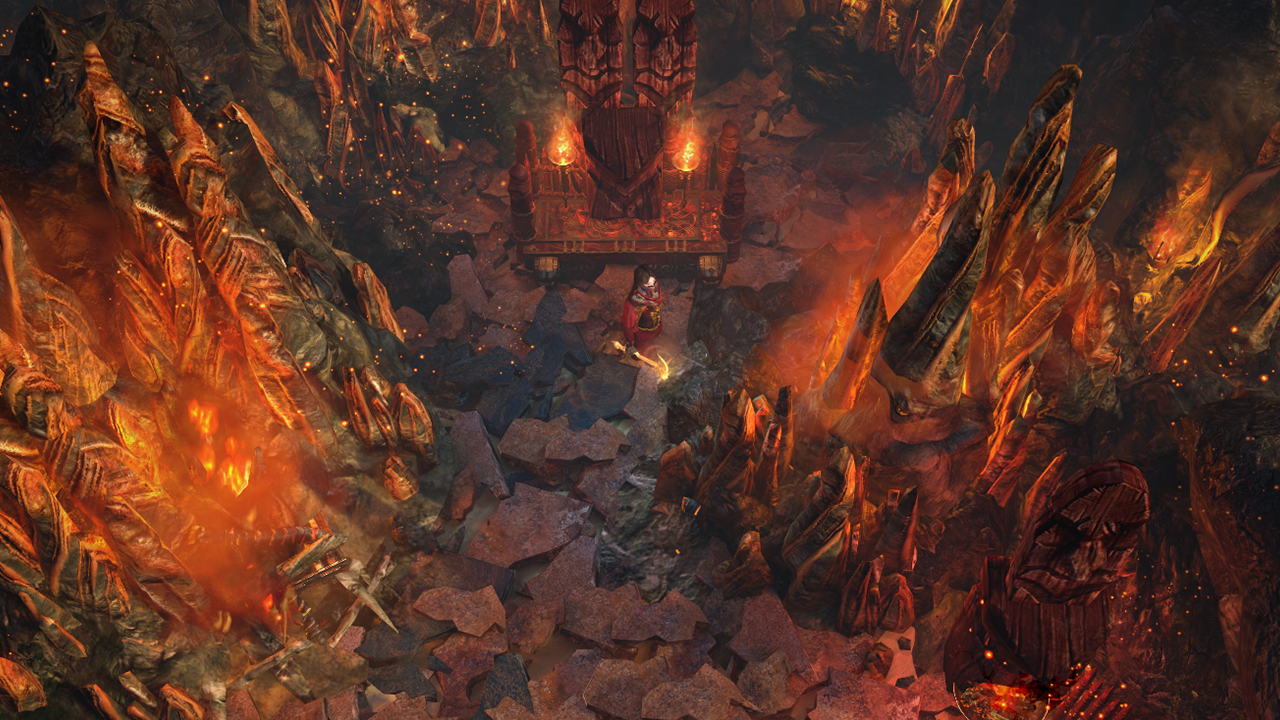 You can visit other players’ hideouts by right clicking on their name and choosing the ‘Visit Hideout’ option. Visitors have limited functions available to them when in another player’s Hideout. For example they can sell items at Masters but cannot buy or use the crafting bench. Hideouts can be accessed in two ways after unlocking them:

Recent changes have made Hideouts Cross-League, meaning you don’t have to start from scratch anymore when starting a new League. Hideouts, Decorations and Favour are shared account-wide now, and on PC (only) there is an option to export your Hideout to a file and import it later. This option can be used as a way to back up your current Hideout before doing something experimental with it, or as a way to simply share a Hideout with other community members. You can have a different Hideout setup for each tileset, and they can be swapped between at will.

Decorations are cosmetic additions to Hideouts that have no gameplay function besides making Hideouts look more aesthetically pleasing. When a Hideout has been claimed, it can be edited by clicking on the Hideout button at the bottom right corner. Decorations are bought from Masters by earning Favour, which acts an an in-game currency in Path of Exile. 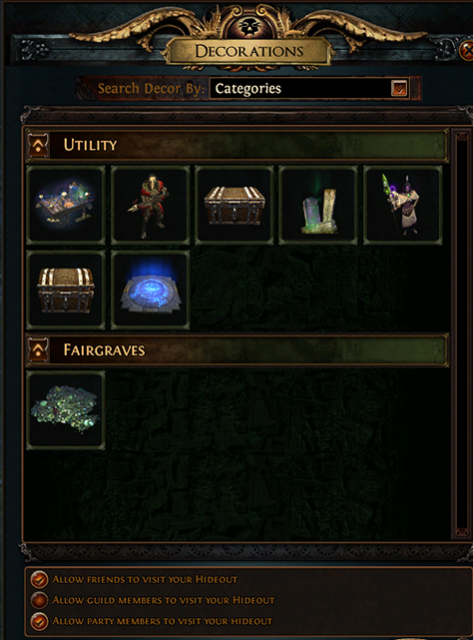 Masters are special NPCs that randomly spawn in the wild and can be invited to a Hideout. After encountering them they will appear in towns as well. 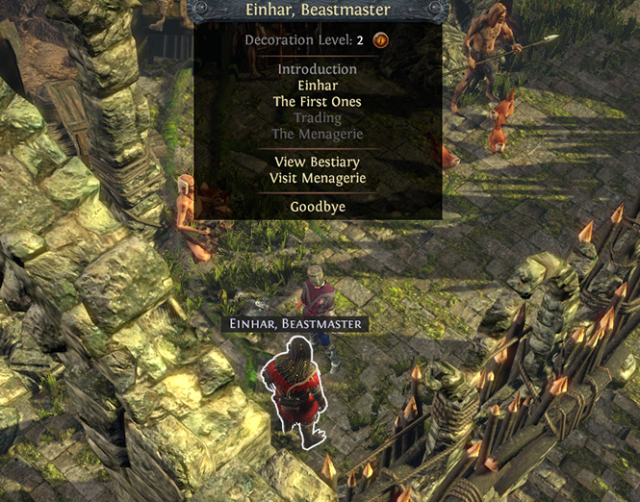 After being found in the wild, Masters will appear in towns

Each Master offers missions, unique crafting recipes and has unique mechanics and rewards. By completing their missions you gain favour which is used to purchase Decorations. Masters have Favour Levels which are capped at 7 and every level unlocks newDecorations. Currently there are a total of 5 masters: 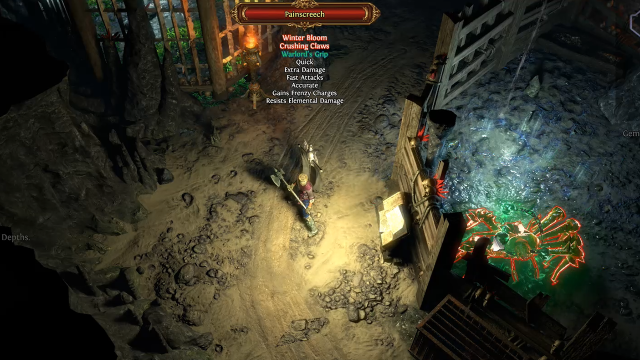 Hideouts are now automatically upgraded to the maximum size when unlocked and can have all types of Masters. There are also non-master NPCs such as Navali that can be invited to a Hideout and their functions will become usable as well.

By placing a Crafting Bench in the Hideout you are ready to start crafting. At the crafting bench you can craft every mod that is unlocked via helping Masters, as well as through exploration. Recipes that are unlocked are shared account wide. 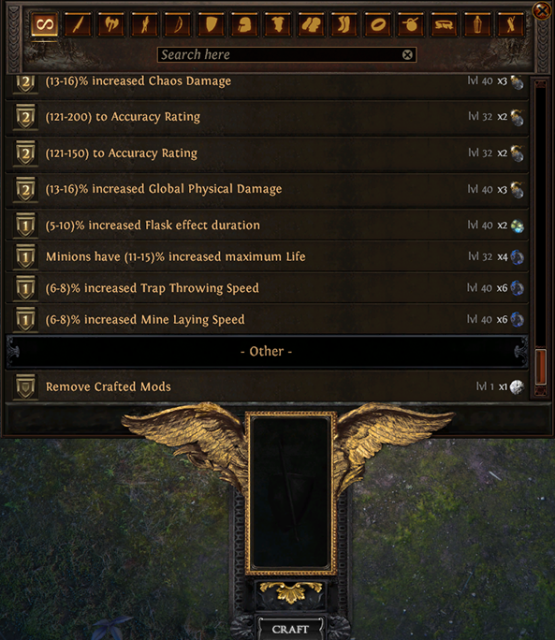 Crafting Bench is important part of the end-game

Crafted mods have a distinctive brighter text then non-crafted ones. If at any point you are not happy with the current crafted modifier, it can be removed by using an Orb of Scouring. It is also possible to craft more then one mod with Of Crafting Suffix meta-crafting mode.

Prefixes and Suffixes describe which affixes are present on an item. More prefixes and suffixes equals more affixes. To know exactly which is which, there is an option in the UI called Advanced Mod Crafting. After you enable this, hold Alt or press the Left Analogue Stick on consoles to see all modifiers. 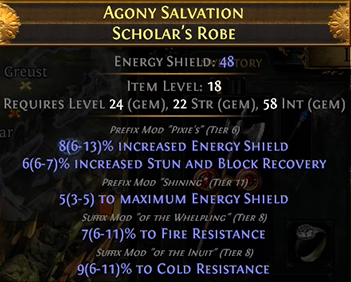 There is a specific amount of Prefixes and Suffixes each item can have depending on the rarity and item type:

By holding the ALT key, or pressing the Left Analogue Stick on console, you view item levels. This is important to know because item levels determine how far numbers on modifiers can go. Item level also determines the maximum number of sockets. The Level of item drops depends on the zone level but not player level.

The difference between a high level item and a low level item, and the modifiers each can roll, is gaping. Let’s take the ‘Increased Physical Damage‘ prefix as an example. The item level 1 can roll 40-49, while item level 83 can roll 170-179. Here you can check the values of every prefix and suffix.

Meta-Crafting means crafting mods that have unique modifiers that break conventional crafting rules. These mods do not give typical stat increases or bonuses of any kind. 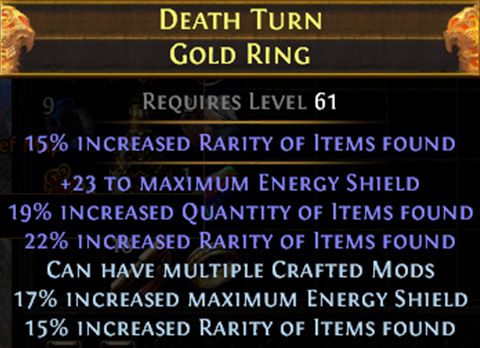 Example of what you can do with meta-crafting mods. Mods in Bright Blue are all crafted ones

There are a total of 5 meta-crafting mods:

Meta-crafting is important for the end-game because it can speed up the process for getting exactly the item you want, or creating a valuable item for trading.

Hideouts are an integral part of Path of Exile because they offer access to Master Crafting and Masters with ease. While Master Crafting and Meta-Crafting are end-game crafting methods, Decorating on the other hand is just a cosmetic bonus that has no influence on gameplay, but offers a nice distraction from constant grinding and crafting. 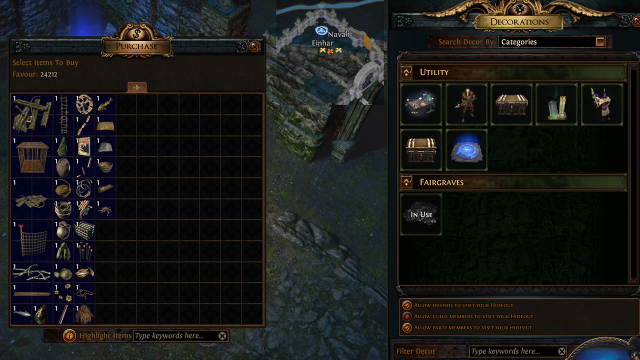 Masters are the most important NPCs in the game because they offer a wide variety of useful functions. These include crafting recipes, mechanics (such as Menagerie where you can battle and sacrifice beasts for rewards), unlocking access to fossils and resonators, new dungeons and so on. Using what they offer to not only receive, but also craft items you desire while grinding maps is the end-game for Path of Exile. While there is a long road ahead in order to be prepared for the toughest content, Hideouts offer what is needed to get you ready for it.

If you enjoyed this guide be sure to check out more of our Path of Exile guides in Path Of Exile: Beginners Guide 2019. Or you can read about the latest news in Path Of Exile Release Gets Delayed Until February 2019. Stay tuned for our Guides on Maps and Prophecies!