Today Grinding Gear Games, the developer and publisher of Path of Exile, announces a new expansion called Harvest for PC and consoles. The new update will contain new gameplay mechanics, the Harvest Challenge League, and will bring changes and revamps to many areas of existing Path of Exile content. In this Path of Exile: Harvest overview we are going over everything you need to know about this new expansion.

In Path of Exile: Harvest, players will meet a new NPC called Oshabi who was cast out by the Azmeri – a simple people who condemn superstitious activities. Oshabi’s interest in the powerful potential of the land has made her lose touch with the practices of the Azmeri, and she has since began a quest to find her own identity. She discovered the Sacred Grove, an ancient garden created by an ancient people, and began to learn of new possibilities for power and has enlisted Exiles to help her explore them. 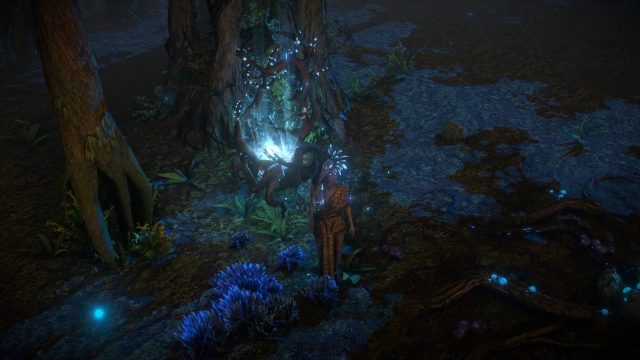 The most exciting new mechanic in this expansion is the farm planning gameplay element which may appeal to players who like city building games, or strategy games. But don’t worry, the whole thing is designed to be pretty easy and low management for players who don’t have a lot of time or don’t want to engage with it much. And for those who are concerned about micromanagement, and don’t really want to build anything complex, Grinding Gear Games made sure that there is a relatively simple process that can be done each time you visit the farm. This new mechanic is a change of pace for Path of Exile, and involves creativity that encourages a different type of gameplay rather than just focusing on pure clear speed.

Players will encounter Seed Caches when playing, and these are found when they encounter magical roots that point in the direction of the cache. As you open the Seed Caches, each will drop a couple of special Seeds that can be planted inside the Sacred Grove, and Oshabi will appear and provide easy access to the Sacred Grove. 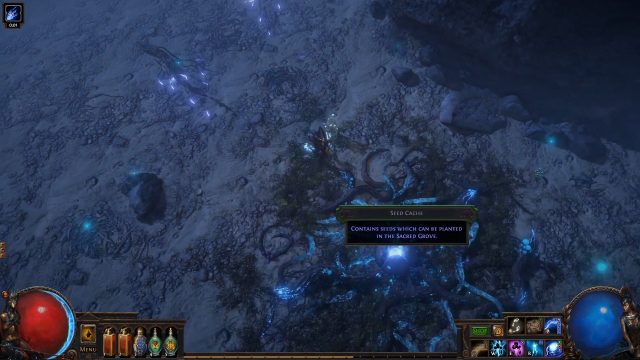 Once inside the Grove, you can plant the seeds that you just acquired, but you will also have to build a collector near them, and these collectors have 3 purposes. First, these can trigger any and all fully grown plants near them to hatch the monsters contained within them. Second, the collector harvests the life force of the planted monsters you defeated and third, you can then use the life force to perform crafting upgrades on your items (we will get into this more later). However these collectors can only store so much life force, so you will need to build extra storage tanks known as Condensers and connect them to your network of pipes. 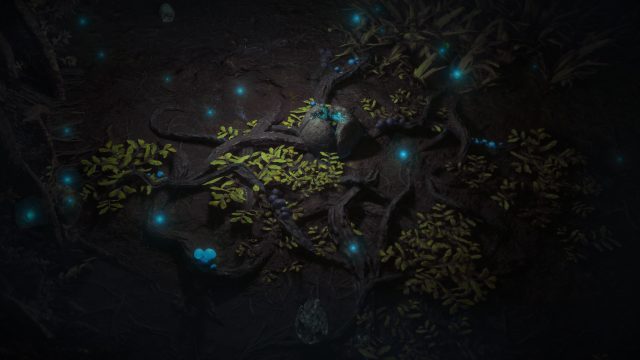 Each Seed Cache you open in the world marks a growth cycle, meaning every time you open a Seed Cache your seeds or plants in the Sacred Grove will grow slightly. And Seeds that you acquire from these caches are known as tier 1 seeds and there are three types Wild, Primal and Vivid. Every seed in Harvest has some kind of requirement for you to grow, and Tier 1 seeds require you to plant them near a collector of the same type. So primal seeds near a Primal Collector so on and so forth.

Tier 2 seeds on the other hand have more strict requirements for growth, and these seeds are occasionally dropped from Tier 1 hatched monsters. Some examples of requirements are: complex garden designs such as, having specific colors of seeds nearby and having irrigation, where you must build a Disperser and connect it to your Condenser via pipes. 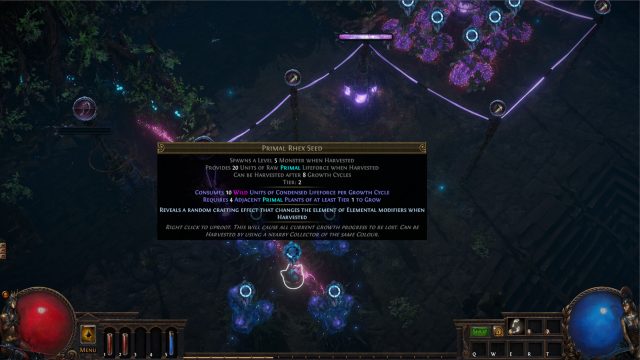 Monsters hatched from these Tier 2 plants will occasionally drop rare Tier 3 seeds, which are even harder to grow, and higher-level players will find that it’s possible for Tier 3 harvest monsters to drop Seeds that enable special Boss encounters. There are three such encounters, one for each type of Harvest Seeds: Wild, Primal and Vivid. When grown and harvested, these seeds will yield formidable fights with even rarer rewards. There are also rumors of a fourth tier, that has a much harder and a rarer boss that you may be able to grow.

In this expansion, Grinding Gear Games is trying something different. In most Path of Exile challenge leagues the player always ends up with way too many items as they play through the game. And, while monsters killed in the Sacred Grove do drop appropriate rewards for their difficulty, the core reward system comes in the form of a very powerful crafting options that you can spend unprocessed Lifeforce on. Each type of Seed will grant different crafting options that are added to the list available after combat. This allows the player to improve and perfect items they’ve acquired into exactly what they want, instead of having to simply use the best of what they find. It’s a sort of “Build your own” approach, allowing the player more control over their equipment. 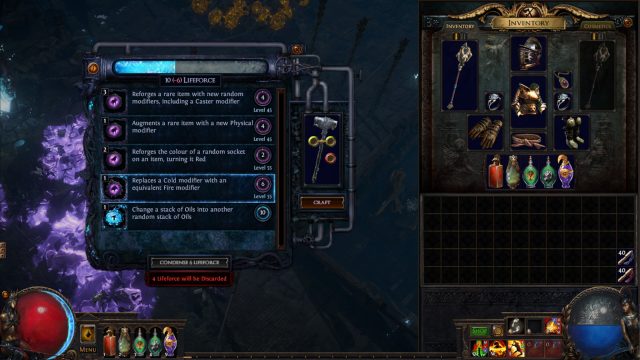 Path of Exile Harvest will introduce 12 new unique items, some of which are rewards from the league. These new unique items will enable players to try out new and unusual play styles that would otherwise not be possible. A good example is the Doryani’s Prototype. This item encourages players to make themselves vulnerable by keeping their lightning resistance low because enemies near them will have their lightning resistance changed to that of the player. This is definitely an interesting way to increase your lightning damage against enemies, and should be interesting to see what players can come up with. 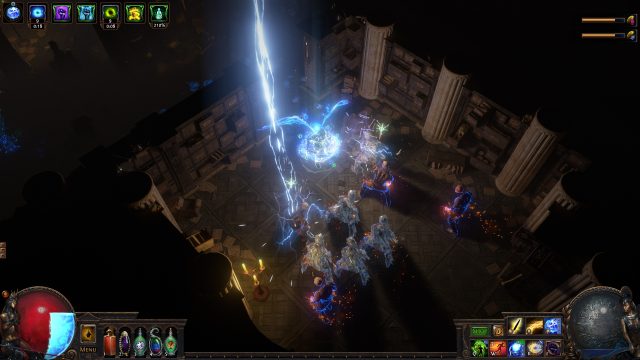 The unique ring Storm Secret pairs well with Herald of Thunder, a common skill that players use as a utility skill and a passive boost to lightning damage, and it also creates lightning bolts when enemies die. This item allows you to use Herald of Thunder as a primary source of damage which makes it more versatile. This is because Storm Secret causes the skill Herald of Thunder to trigger its lightning bolts when an enemy is shocked instead of only when it is defeated. There are many other potential uses for it that may be of particular interest to players who enjoy the historically popular “Herald Bomber” build.

The expansion will also bring rebalances to over 50 unique items in the game, and while some of you may think that rebalancing 50 items is a lot, remember that they are currently over 900 unique items available in Path of exile. The Moonbender’s Wing unique axe, for example, previously granted the lightning warp skill but didn’t actually trigger it automatically. It also converted your damage from physical to elemental rather adding new damage. Second, The Wake of Destruction unique boots had the “ Chance to cause monster to flee” property, which has been removed and replaced with a trail of shocked ground beneath your feet while your character is moving. Enemies that stand within your shocked ground take more damage. 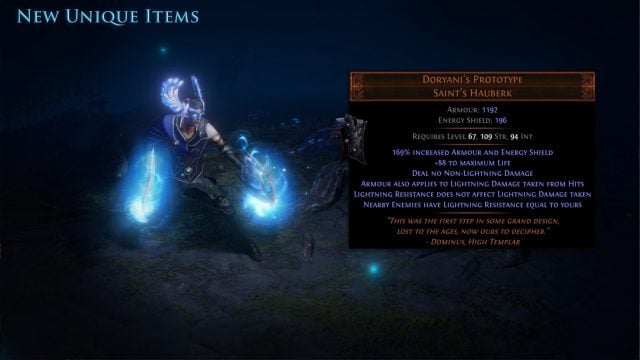 When it comes to Skill changes, the devs have focused on rebalancing two-handed melee weapons, improving the base item types themselves, as well as buffing various related skills and adding better passive skill tree support. For example, “Slam” Skills received makeovers to improve their usefulness and make them more viable in general. 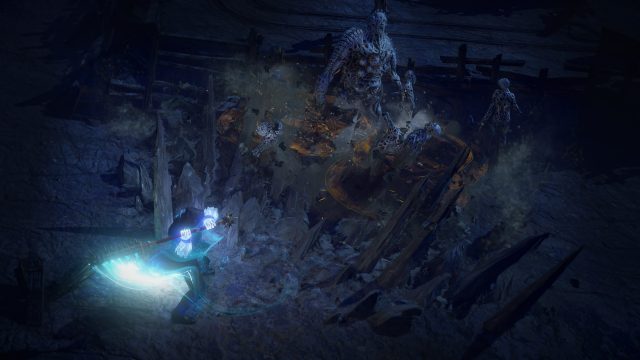 The Fist of War gem now supports any slam skill, and a spirit will periodically appear alongside your character to perform a slam skill in unison with you, adding more AoE damage to your Slams, and rewarding harder hitting slower Slams with higher copied damage from the spirit.

The classic Path of Exile skill, Tectonic Slam, has been reworked and also received impressive new visual effects. Now the skill only removes Endurance charges every three uses, making the charges easier to maintain. The AoE now increases for every endurance charge, resulting in an even a wider spread of damage. These changes will definitely make it a much more effective melee skill and will encourage investment into Area of Effect and Endurance Charge generation.

All Warcry skills cast a wave that taunts nearby enemies and has various defensive and offensive effects on enemies or allies, and Warcry Skills have existed in the game for a long time but have since fallen out of favor in the past few expansions. With this update 4 new Warcrys have been added to the game, and others have been revamped giving them significantly more power, more passive tree support, improved functionality and improved visuals.

The new warcry skill Seismic Cry produces a shockwave that pushes enemies back for a short distance and taunts them to attack the user. It also grants a buff that will make stunning enemies easier and causes your next few Slam attacks to be exerted. These exerted attacks will deal more damage and increased AoE than normal attacks, and will also become more powerful with each successive attack.

A Warcry skill that received reworking is Rallying Cry. The skill will no longer regenerate Mana, but now grants a percentage of your weapon damage to each of your allies based on the power of nearby enemies. It will also cause your next few attacks to become exerted, granting increased damage based on the number of nearby allies.

The Harvest Expansion will also introduce three new brand skills, but we will only cover the Arcanist Brand and the Penance Brand in this article.

Upon placing the Arcanist Brand on the ground, it will attach to an enemy and trigger any spells linked to these skills in a sequence. It works similarly to Poet’s Pen and other trigger skills. This will open up more options for player builds, because this will let you use almost any spell as if its were a brand.

Upon placing Penance Brand on the ground, it will attach to a nearby enemy and become active. It will build up energy and spread to additional nearby enemies before exploding, causing a quick succession of explosions while dividing and spreading between enemies.

Path of Exile’s massive passive skill tree is one of the features that sets it apart from other ARPGs, and is the core of all character builds in the game. While the expansion Delirium introduced the cluster jewel system that allowed you to expand your passive tree, the core tree didn’t receive any significant changes. For the Harvest expansion, they’re adding many new keystone passives and notable passives. They’re also adding passive tree support for mechanics that have been introduced recently but don’t currently have any passive tree options to allow you to enhance those play styles.

They will also add some of the popular keystone passives from Legion’s Timeless Jewels, making them available on the main tree. A good example of a keystone passive that was originally only accessible by socketing Timeless Jewels in your tree is The Agnostic keystone. This keystone prevents players from utilizing Energy Shields as a defense but allows players to use Mana as an essential life-saving tactic. 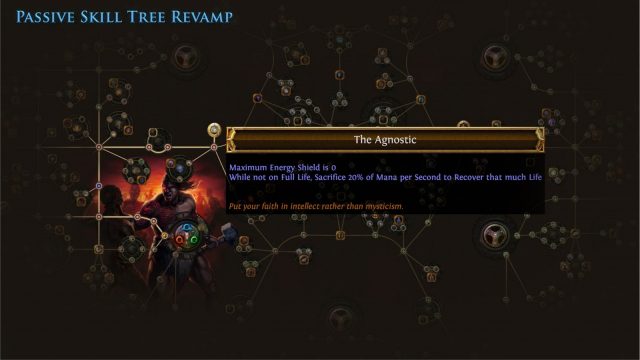 Lastly, Delirium will be added to the game as a core feature. Usually, when a league is added into the core game, there will be a 10% chance to encounter it. However since Delirium integrates so well with the base game, the plan is that the chance of it being encountered in an area is proportional to the amount of other additional content in the area. So if players put time into grinding out add extra content to play, they will then have a higher chance of encountering Delirium in their game. 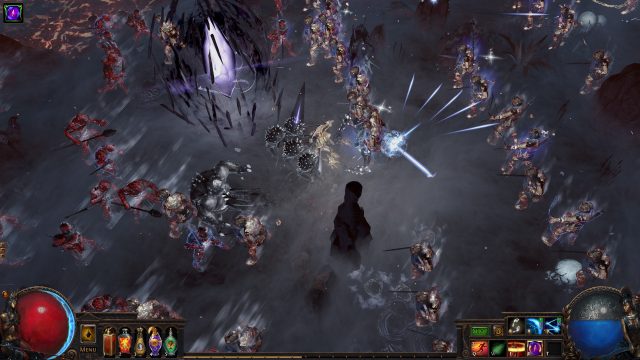 Path of Exile Harvest releases on June 19th for PC and will release on PS4 and Xbox One on the week of June 22nd. Stay tuned for more Path of Exile content and we will bring you more coverage as new info releases so be sure to follow us, and keep an eye on our YouTube channel.