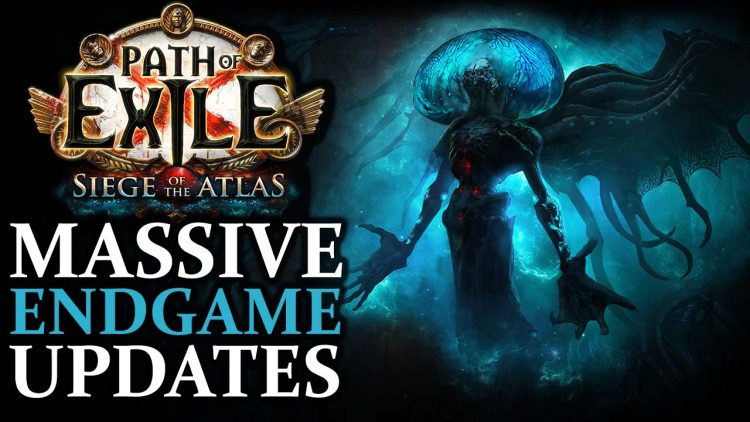 Path of Exile’s latest expansion is making huge changes to the game’s endgame Atlas map system. It will be released to players on February 4th, 2022.

Path of Exile Gets New Expansion Siege of the Atlas; Releases on February 4 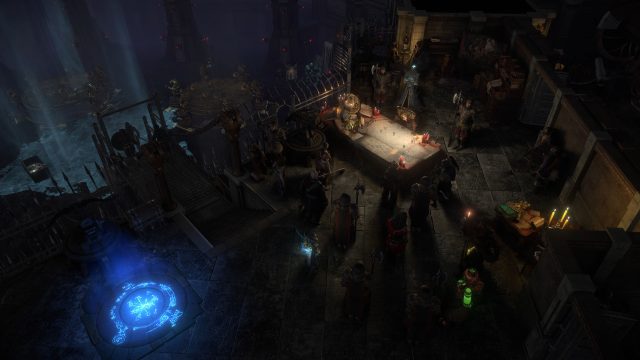 Karui and the Atlas of the World

Fans of the popular free-to-play ARPG Path of Exile are in for a treat this February 4th. Grinding Gear Games has released the full patch notes for the upcoming expansion, Siege of the Atlas. Along with the usual new items, enemies and balance changes, the developer is also releasing an overhaul to the Atlas map endgame system.

Commander Kirac has established control of a base in the Karui Archipelago. He is thus responsible for the defence of the Atlas. He then requests the player’s aid in defeating any threats to the land of Wraeclast. It is then the players discover two new Eldritch Horrors that they must overcome: The Searing Exarch and the Eater of the Worlds. 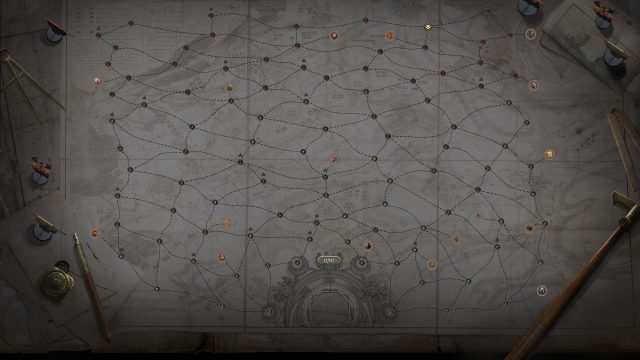 The game’s Atlas of Worlds system was originally introduced in patch 2.4.0, way back in September 2016. Players would explore the Atlas by completing maps scattered across 8 different regions. These maps could be further customized by integrating Watchstones into designated citadels spread across the regions. In patch 3.13 back in January 2021, an Atlas passive skill system was introduced which gave players powerful region-specific passives that enhanced maps, loot, and encounters.

Since then there have been numerous updates but none quite as massive as this one. First up, the Atlas itself is being completely reworked to have more complex systems but at the same time be easier for players to understand. Regions are being removed to simplify things, so players will have access to a larger map that they can have greater choice in exploring. Watchstones are being removed as well and are being replaced by Voidstones. These new items will raise the tier of all your maps at the same time, whereas the Watchstones raised the tier per region. 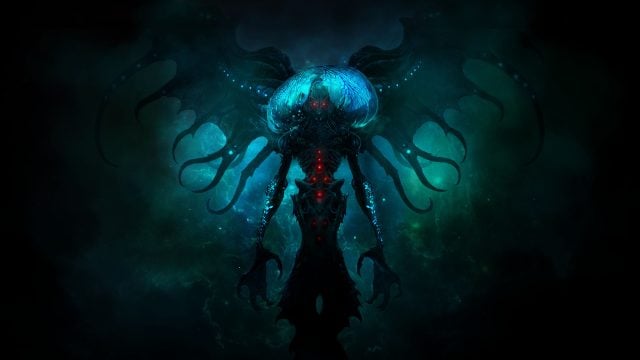 Meet the Eater of Worlds

By completing maps that are under the Eldritch Horrors’ influence, you gain access to their sub-bosses, the Black Star and the Infinite Hunger. Defeating these two foes will give players the opportunity to face off against The Searing Exarch and the Eater of Worlds. There will also be a competitive event later on that will have players racing to be the first to defeat the Eldritch Horror bosses as well as The Maven. 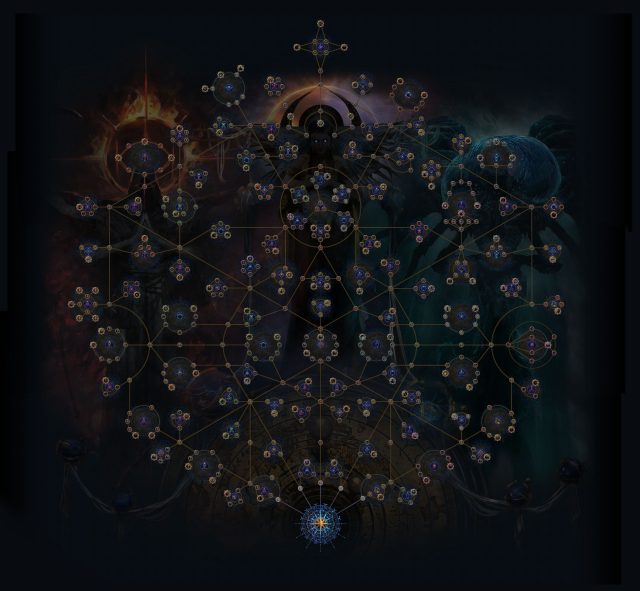 The Atlas Passive tree is being simplified, just like how the main Atlas of Worlds’s regions were combined into one. Now players will have a new, massive 600 node passive skill tree for the endgame system. Grinding Gear Games has taken the most popular and best skills from the previous skill trees and integrated them into this new one.

Every map and every Atlas quest will reward players with a skill point, so the number of available skills shouldn’t be too daunting. 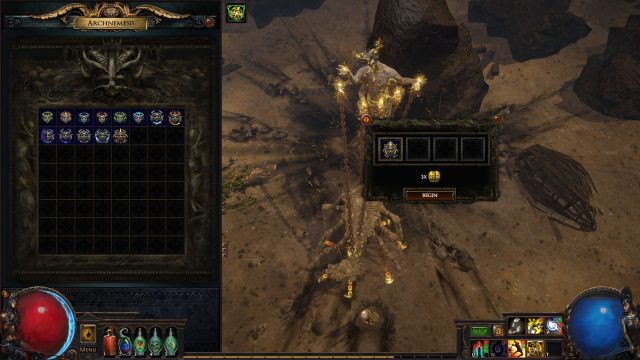 Build Your Own Archnemesis

As with every few months, Path of Exile introduces a new challenge league to keep things fresh. All characters from the current league are moved into their respective Standard and Hardcore leagues. Players will need to start from scratch whenever a new league rolls in, but it provides everyone with a level playing field.

This quarter’s flavour of the month is the Archnemesis Challenge League. The main feature of this update is to revitalize encounters that players have with rare monsters. 60 new monster mods are being implemented into the game that will allow players to customize their boss fight encounters. It’s is somewhat similar to a choose-your-own difficulty like in Hades, to a smaller degree. 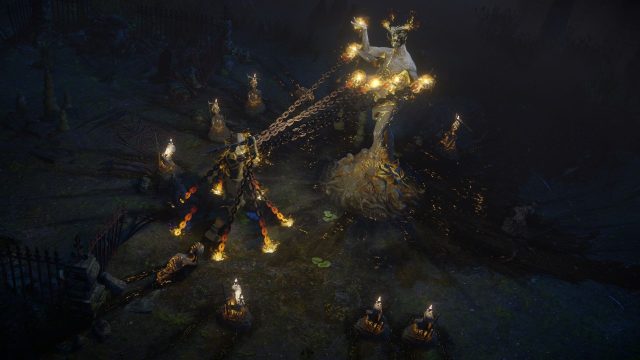 Petrified Monsters Can Be Your Worst Foe

Some rare monsters will drop an item version of the monster modifiers that players can collect for later use. During their travels, they will encounter petrified monsters that can be awakened by offering some monster mods to them. The frozen creature will then gain the mods you applied (as well as any previous mods applied in the same area) and then come to life. The more mods attached to a boss, the greater the difficulty, but also the greater the reward. 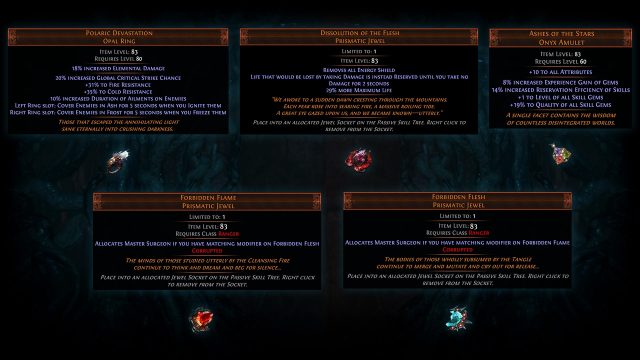 Of course, what’s a new expansion without a slew of new and exciting items? The four new Eldritch bosses will have their own drop list of powerful items that players can obtain from them. Grinding Gear Games even mentioned that some of these new items will be the most powerful introduced into the game, and will enable new and unique character builds. 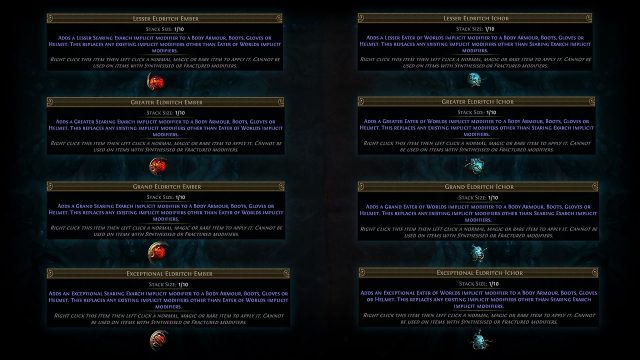 For example, Ashes of the Stars is a new unique Onyx Amulet. This new item increases the experience gain, skill level and efficiency of all equipped skill gems. The Polaric Devastation is a unique Opal Ring that increases elemental damage as well as fire and cold resistance. It will have a secondary effect, depending on which ring slot the item is equipped in. If it’s on a player’s left finger, it covers enemies in ash when they’re ignited. If it’s on the right finger, it instead covers the enemies in Frost when they’re frozen. 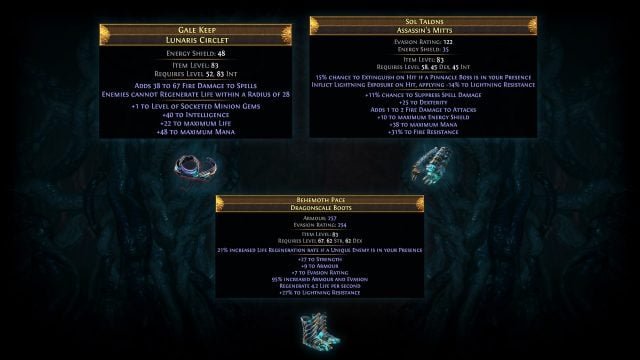 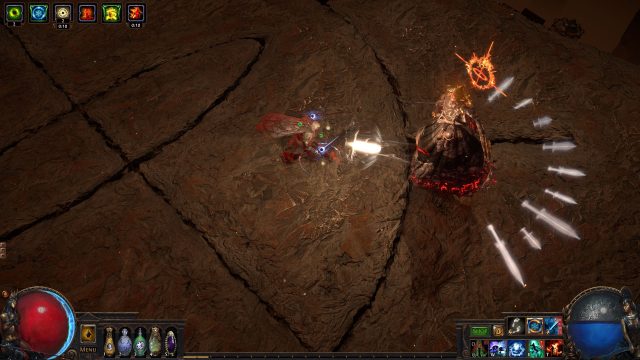 Face off Against the Searing Exarch

Lastly, we have a full balance pass through like in any major Path of Exile update. However, this time the major focus was on two build archetypes that the team felt were under-used. In this upcoming patch, hand-cast spells and hit-based bow spells are both receiving major buffs.

In general, hit-based spells do inferior damage based on magic damage of things like Traps, Totems or Damage over Time. Hit-based spells also offer little to no defensive or mobility options. Being able to move quickly is extremely important for speed farming. Thus, the majority of spells had their damage rescaled and improved significantly. Some spells even do up to 60% more damage, depending on the type. 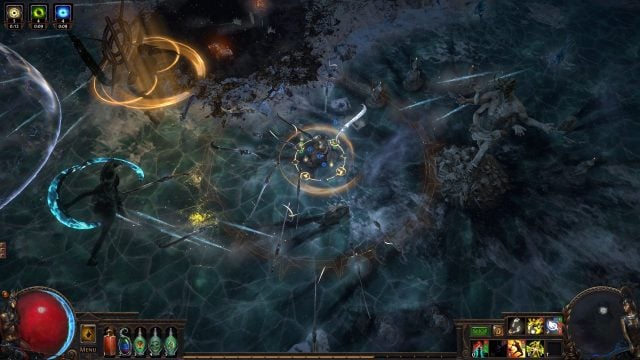 For bow attacks, it is currently too difficult to reach the damage potential of other builds as they require a heavy skill investment. The solution that GGG is implementing will include upgrading bow elemental damage modifiers to match those of two-handed melee weapons. Bow items across the board will have their base damage boosted as well, and in some cases get up to a 50% boost. Bow passive nodes will also be improved, with a new keystone, Precise Technique. This grants +40% more attack damage if accuracy is higher than max life, at the cost of never being able to deal critical strikes. 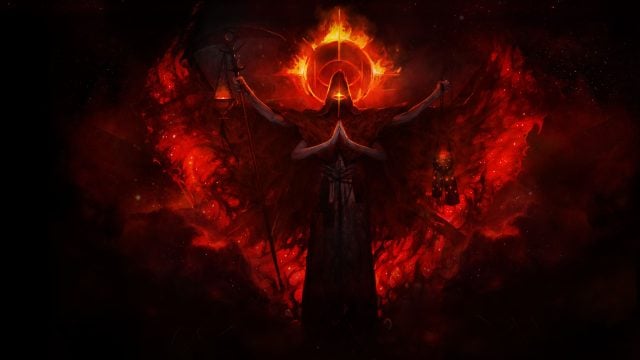 Path of Exile: Siege of the Atlas is replacing the Scourge expansion on February 4th. There is so much more available, which you can check out on the official Patch notes. We don’t have any news just yet on what’s happening though with Path of Exile 2. While waiting, and if you’re in Korea, you can check out Undecember, an ambitious ARPG. We also covered the Top 10 ARPGs that You Should Play in 2021, but are still totally fun in 2022.