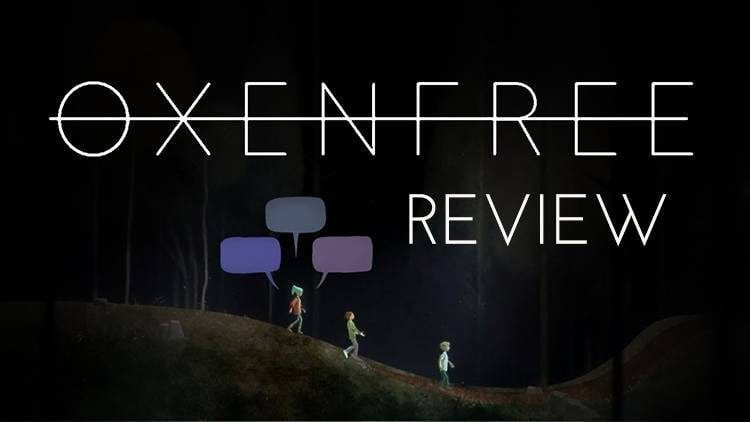 Truth in advertising: there are indeed no oxen in this game. In fact, I hope it’s not too much of a spoiler to indicate that the game is in fact largely devoid of livestock in any form. This is not a farmers’ market simulator. The developers have billed this as “a supernatural teen thriller,” and while that’s probably a good starting point for its identity, and also frankly for a few of its weaker points, Oxenfree is a good deal more. The game is distinctive from its very beginning, with an interesting and deliberate graphical style. The gameworld looks part watercolour, and partly like it’s been created out of craft paper, without an absolute approach to perspective or scale. It reminded me of the old illustrations in the Moomintroll books. Then again, I always did find them rather creepy. This is the majority style you’ll see in the game, and it works very well. It’s also worth paying attention to the detail. While some action areas are indicated by a small circle when you get close enough, the appropriate action being executed by a press of the spacebar (on PC), there are other areas where there is a non-HUD visual cue that more can be done. The game’s protagonist, Alex, starts the game with a portable radio and tuning this can gain access to broadcasts explaining the island setting’s history, or to gain access to new areas. Other areas, not quite so obviously marked, also warrant tuning the radio to listen to the ‘anomalies’ being broadcast on strange frequencies, which serve both as collectible and explanation of the island’s more hidden history. A red dial is often an indication there’s more to be learned from your radio in a specific location.

Finding out just what the heck has being going on is the core of the game’s story and progress. The game begins with Alex and friends heading back to Edwards Island, site of a former military installation beloved, apparently, of local teenagers up to hijinks. The initial ferry-ride over and walk through the town introduce the control scheme, the characters, and some of the quite interesting game mechanics supporting the game. As your friends banter around you, a number of dialogue options appear. And then disappear. If the moment in the conversation passes, so does your opportunity to speak. Of course, that can also be a deliberate decision, as perhaps inevitably for teenagers but certainly for a game, these people bicker. You can take sides, try to be the peacemaker, or keep quiet and go throw rocks in the water. All of which changes how the characters perceive you. It’s a degree of subtlety most games with opinion-management challenges don’t achieve. I’m with Jonas on this one. All of you, please stop talking.

Then, weirdness happens. You’d be forgiven for thinking you were walking in familiar territory here: teenagers with annoying verbal tics and interminable squabbles, party on an isolated island, a new step-brother to mess up your life. It is difficult to describe without spoilers, but this is not an indie Until Dawn and it is not going anywhere near where you think it is. The core story is creative, well told and evolved, and there are a number of surprises both narrative and a few moments which genuinely made me jump. So the big question: does it work? It’s probably easiest to start off with what Oxenfree is not. It is not a traditional point-and-click adventure; there are limited puzzles, and each of these sequences is designed to underpin the narrative. But neither, then, is it a 2D walking simulator. It is very much a story-led experience, and perhaps here is the game’s only real shortcoming, which is not to do so much with narrative as with exposition. I mentioned above the main art style which is prevalent throughout most of the game. There are times, however, when the characters stop to take photographs. When these are presented, the art style to me looks different – the stylised, skinny-tube arms and big heads so beloved of modern animated cartoonists. These Bratzy representations don’t quite fit the rest of the graphics, but they are most definitely contiguous with the script and the voice acting; if people thought the teen Lex Americana put forth in Life if Strange was a bit much, it has nothing on the cast of Oxenfree and their propensity for dick jokes. Somehow this just doesn’t sit right. The sound design of the game is fantastic, and the atmosphere likewise. Cycling through the radio stations, you will happen upon many different broadcasts: static, eerie music, strange half-heard voices, and Morse code signals a certain type of gamer will be frantically trying to decipher. Even the ragtime music and movie quotations take on a strange otherworldly quality in this context. Once the ‘interventions’ start from whatever it is that’s behind things, there’s some really good game design with mechanics and audio that are unpredictable and highly unsettling. I was really impressed at this sense of place and weirdness. They so silly. Tigers don’t volunteer for submarine duty! Oh, wait the human. Meh, no cat, no interest.

Which is what makes the teeny prattle so jarring. I had the same misgivings with SOMA, an otherwise fantastic game. OK, so Buffy and Angel did much the same thing, a juxtaposition of the light-hearted, the personal drama, and whatever Big Bad was taking a bite out of things at that particular moment. I understand it is far better to see the characters as rounded people, not flat axe-fodder. Personally, I’m not quite so sure I would have continued to be so pithily blasé at the dénouement of this set of circumstances. Other than that, this is an enormously intriguing game well told with surprisingly deep mechanics for a relatively short indie title. The ways you can impact Alex’s relationship with her friends are both complex and subtle, and the story is unpredictable and can be advanced through unpredictable means. Both of these factors, together with two sets of collectibles discerned in different ways, makes for an excellent game with solid replay value.

8.5
Summary: Inventive, spooky, and compelling, marred only by an overly vocal cast. The story is clever, you will want to see this to the end. Surprisingly deep mechanics, and a different take on managing NPC opinions. Overall a very logical and thoughtful game.
Story & Setting (9)
Gameplay (9)
Design (7.5)
Replayability (8)
Pricepoint (9)