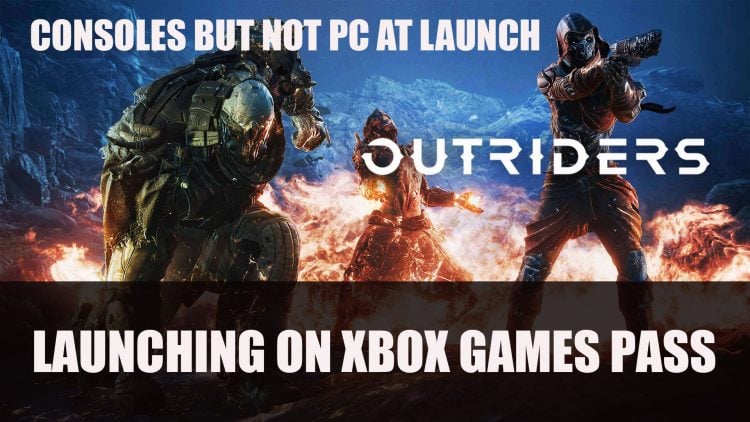 The sci-fi shooter RPG Outriders will be launching on Xbox Game Pass on April 1st, now confirmed by Microsoft.

Following hints this week, Microsoft has finally confirmed that the sci-fi co-op shooter RPG Outriders will be coming to Xbox Game Pass upon launch. The title launches on April 1st (no joke) and will be available on Microsoft’s subscription based game service.

Microsoft have confirmed however it will be only available for console and Cloud (Beta) from April 1st:

Hi, to clarify Outriders will only be available on Console and Cloud (Beta) on April 1

If you haven’t yet, you can check out the Outriders demo which gives a good chunk of content for players to experience before taking the plunge to play the game. Developer People Can Fly have shared that two million people have already downloaded the game’s demo so far. You can also check out our Outriders Gameplay Demo Gameplay Impressions to find out what we thought of the game so far, including classes, multiplayer, skills and more:

Outriders is a co-op shooter RPG that takes players to the planet of Enoch as a “last chance”, where humanity plans to colonise after Earth becomes inhabitable. It offers four different classes to play which are Pyromancer, Trickster, Devastator, and Technomancer.

Outriders will be releasing on PC, Xbox Series X|S, Xbox One, Playstation 4, Playstation 5, and PC via the Epic Games Store.

For more news be sure to check out next Crusader Kings 3: Northern Lords DLC Releases March 16th and Grime A Souls-Like Metroidvania Gets New Gameplay Video.