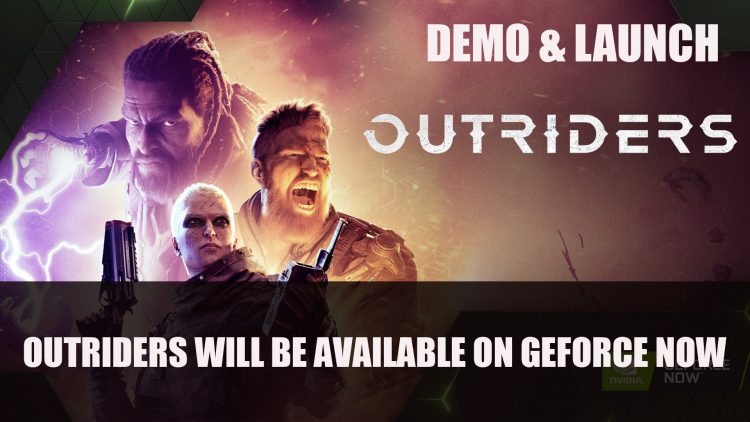 Upcoming shooter RPG Outriders will be coming to Geforce Now. Find everything about Outriders here.

The demo for Outriders is fast approaching, arriving this month on February 25th. Those who want to try out the game and have GeForce Now can try out the game through the gaming cloud when the game’s demo goes live, and when it launches on April 1st.

Today we’re excited to officially confirm that Outriders will be available on @NVIDIAGFN starting February 25th (Demo) and April 1st (Launch), meaning you can jump into Enoch on any device, with GeForce power streamed from the cloud! pic.twitter.com/pE7BLc1mll

The way the service works, it will of course require a steady and fast internet connection in order to play games. The service is similar to Microsoft’s Project xCloud however doesn’t currently provide any games for subscribers, and you will need to purchase games through places such as Steam before you can play them on supported devices. The great advantage of the platform means being able to play graphics demanding games without the need for a top PC setup, letting you play on a number of devices.

Outriders was supposed to release during the month of February but got delayed to April 1st. A demo instead is releasing on February 25th, letting those interested to try the co-op RPG shooter out. Outriders will have full cross-play support, meaning everyone across platforms can co-op together. Players will also receive free game upgrades from PS4 to PS5, as well as there is support for Xbox platforms through the smart delivery system. So even if you don’t the next-gen console by the release date, you can still pick up a copy without the worry.

Outriders is set to release on April 1st, 2021 for PS4, PS5, Xbox One and Xbox Series X and PC via the Epic Games Store and Steam. Stadia support will be coming later in 2021.

For more news find it here in NieR Replicant Ver 1.22 Gets 9 Minutes Of Gameplay Featuring The Barren Temple and Assassin’s Creed Valhalla Gets River Raids With Free Title Update.