The way the Twisted Hunter Build works is that it uses Twisted Rounds to buff damage with each shot fired. In many cases this is double or more damage, depending on your Anomaly Power, but the key is maintaining this buff all through out combat…or as much as possible anyway.

This is accomplished by using the Weapon Mod Perpetuum Mobile, which is arguably one of the best Mods in the game. This Mod reloads your Weapon for you instantly if you kill an enemy with 35% or less of your ammo left in your magazine. This is very easy to do, especially with a Shotgun, which is the preferred weapon type for this Build. You should be able to kill all but Captains with one shot eventually, and two at the very most.

Because it takes some times a full magazine of ammo or more to finish off a Captain, you generally want to move from target to target thinning out the trash enemies first. This will allow you to keep up Twisted Rounds the whole time, and you can and should avoid the Captain of the area by using Hunt the Prey, which is also good at gap closing to enemies that are dug in far away.

There is never any real need to stop moving with this Build, and generally the only time you need to cover is when you messed up with Twisted Rounds, or if your Hunt the Prey is on cooldown and your targets are very far away. Otherwise, just sprint as fast as you can and hipfire everything in one shot, using Hunt the Prey as needed. 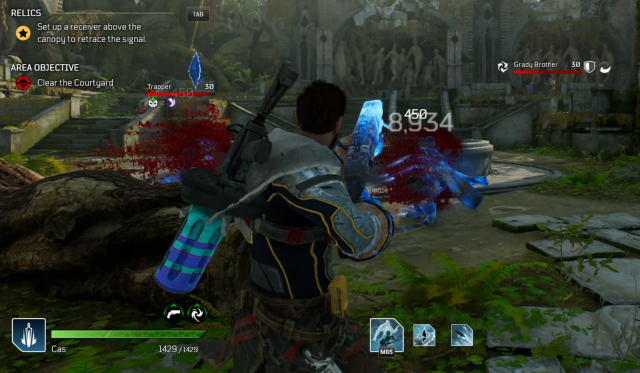 Twisted Rounds – This is Skill is really what the whole Build revolves around, buffing your magazine with extra damage per shot that scales with your Anomaly Power. What’s really great about this, is that no matter what Attributes come on your Weapons or Armor, either Firepower or Anomaly Power, you will still get more damage per Shotgun blast because of this Skill.

Hunt the Prey – This Skill is one of the most versatile in your arsenal and can be used to close the distance instantly on a target far away, like a sniper, or to get away from a bad situation (like when you’re surrounded or a Captain is right next to you). Additionally, it sets you up for an easy shot on your target, as it places you behind them. It doesn’t work on some enemies that you can’t teleport behind, and in some cases if the game can’t place you behind the enemy it will just teleport you in place, but these situations are rare. Learning how to best use this Skill can make all the difference to this Build.

Temporal Blade – This Skill works well for dealing with large groups of enemies which can sometimes be problematic if you have a slower firing Shotgun. However, if you don’t have much Anomaly Power or the right Mods it won’t deal much damage. However, it is still effective as a temporary Stun for lots of enemies, and it can interrupt Bosses. If you plan to use this then you’ll want at least one Mod that boosts its damage if possible.

Borrowed Time – This Skill is great for giving you Shield, as well as creating a spot you can teleport back to when you want. It effectively gives you a second teleport ability, and can be a lifesaver in situations where you need to move in a hurry. I tend to use it more for the Shield buff than the teleport, but it’s nice to have that teleport if you need it.

Venator’s Knife – This Skill slows enemies in a small area for a good chunk of time, but its real value is doubling the damage you deal to targets effected by it. This can help you make short work of Bosses if you have your Twisted Rounds buff active, and should be used on them before engaging when possible. You can sometimes 1 or 2 shot Captains with this affecting them.

Another large part of this Build is figuring out just exactly where to spend your Class Points to get the most bang for your buck. In this Section I’ll show you where I like to place mine in order to be effective, but you can vary from this a bit and still be fine. Let’s start with Harbinger first.

Probably the hardest part of learning to play the Trickster is staying alive long enough to figure out how to play effectively. When I first began playing this Class I often died because jumping into the middle of a pack of enemies is a scary proposition, and often I wound up dead before I could fight my way through. However, placing points into the Harbinger line helped me through this, as it makes the Trickster much more surviveable, and you really need that if you are playing a close-range character.

Placing points into Anomaly Persistence, Oddity Resistance, and Shield’s Timeline allowed me to fight much more aggressively without the need to use cover, and by doing so, provided me with more healing because Tricksters heal by killing at close-range. You need to be able to take some shots in order to keep running around without stopping, so prioritize this line first and spend about 7 or 8 points here if possible. 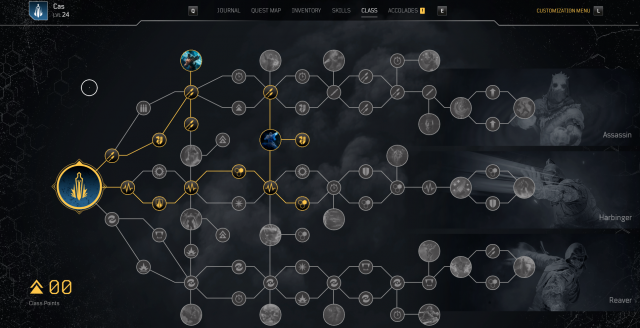 Once you are tanky enough to live through most fights easily you’ll want to move over to the Assassin line in order to pick up some nodes that increase your damage like: Arms Trick, Shotgun Master, and Death Probability. You want each shot fired to kill the target whenever possible, so taking these passives is a must.

Try to balance between Assassin and Harbinger as you go, taking Assassin nodes if you have no issues staying alive, and taking Harbinger nodes if you need some more surviveability.

For this Build you’ll obviously need a Shotgun of some kind, but I strongly advise that you use the best one you have that has the highest damage per shot, and not the highest DPS. As I mentioned before you want one shot one kill wherever possible, and this is much easier to do when you hit like a truck. Avoid Breach variants for this reason, and if you found a good Shotgun you like, but it’s a Breach Variant, make sure you change that first thing.

If you’re using an Auto-Shotgun, make sure you change it to the variant with a smaller magazine size and higher per shot damage. While they usually do less damage than your typical Shotguns, they can be quite effective and typically are more accurate over longer range. 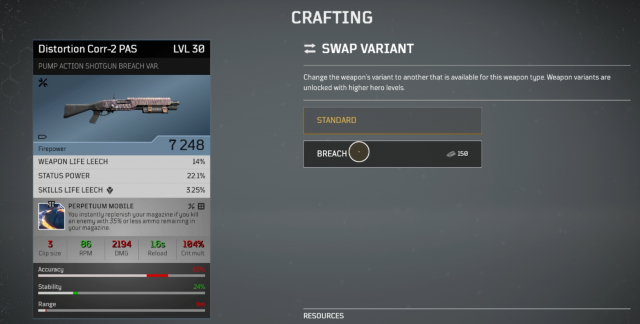 You will need the Perpetuum Mobile mod on this Weapon and it is not optional for this Build to be effective. If you’ve deconstructed a Weapon with this Mod on it, then you can add this Mod to any Shotgun once you’ve rescued Zahedi.

What other Mod you have on there is not super important, but ones that heal you or give you Shield are usually good. Soul Devourer for example heals you with each killing shot, which should be just about every one. This allows you to keep running and gunning without the need to stop and cover.

Besides a Shotgun I strongly recommend an Assault Rifle or Light Machinegun for Boss fights where you are shooting  from far away. This happens in many of them, and this can make your life a lot easier, and in a lot of cases outperforms Shotguns. Additionally, looking for one with Weapon Leech on it is very helpful, as this will heal you with every shot landed, and that is vital in Boss fights.

What Mods you use on it again are not super important since it’s generally only used for Boss fights, but anything that provides healing is welcome. Keeping your Health up can be difficult for Tricksters during Boss fights if they are not geared properly.

What Attributes are on your Weapon besides Weapon Leech are not super important because, as I already mentioned, both Anomaly Power and Firepower both improve your damage, and Health will keep you alive. So try not to worry too much about these until you are at end game.

There is a really good Mod called Strong Twist that increases your Firepower by 15% while Twisted Rounds is active. This should be all the time, ideally, so that’s a near permanent 15% increase. There is also another one called Twisted Fate that increases your Critical Damage when Twisted Rounds are active, which is not a bad choice either. Both boost damage, and that’s what you want.

Another good Mod is called Dance of Death and it reduces the cooldown of Hunt the Prey by 20%, allowing you to use this Ability more often. You are always in a bit more danger with this Build when this Ability is on cooldown, so getting it back faster can improve your chances of survival.

Another Mod I like is called Radiation Jump and it places Vulnerability on the target when you use Hunt the Prey, increasing the damage they take. It’s overkill for most enemies, but really helps to improve damage on Bosses. Use Venator’s Knife, Hunt the Prey and then unload on the Boss while Twisted Rounds is active for fast kills.

In short you want to boost Hunt the Prey and Twisted Rounds with most of your Mods if possible, since you will always use these. However, you can use one Mod for your 3rd Skill, and that will vary a bit depending one what Skill you chose. Look for ones that compliment the run n’ gun style of play, and slot the best one you can.

Remember that Tricksters heal from killing enemies at close-range so you want to avoid shooting enemies that are far away if you can. That’s not to say you should never do that, but ideally you’d kill enemies close enough to get some healing. However, this is less of a problem if you have a Mod on your Shotgun that heals you when you kill enemies.

Avoid Mods or Class nodes that reward Reloading as you will be trying to do this as little as possible with this Build. The idea is that you never have to Reload and therefor never lose your Twisted Rounds buff. You will still have to Reload now and then, but you certainly don’t want to plan for it. 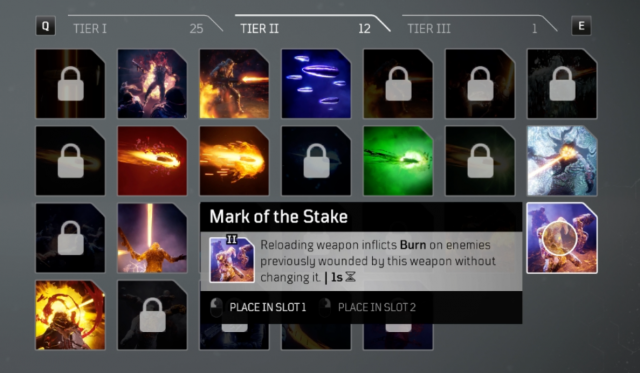 Learn to hip-fire while sprinting since it’s much faster than stopping to aim at every enemy, and you need to kill quickly in order to stay alive. If you’ve played Gears of War at all, then you should be familiar with this, as the Shotgun behaves nearly identical to those games.

Lastly, make sure to keep using better and better Shotguns as you find them. You need to keep your damage high in order to play this Build, and its far easier to Mod a new Shotgun with Perpetuum Mobile than it is to keep upgrading your current Shotgun. So look out for new Shotguns that have high DMG, and not DPS, and equip and Mod them every chance you get.