In this Outriders Devastator Build Guide I’m going to be showing you my Seismic Juggernaut Build, which is a Starter Devastator Build meant for mid-range combat. In this Guide I’ll be showing you what Skills to use, what Class Points to take, and what Weapons and Armor to look out for. If you’ve been looking for a way to improve your Devastator, or if you just want some insight into how to play this Class, read on to find out.

The Devastator Class is the only Class in Outriders that does not have a “Rounds” buff that can boost their damage drastically, meaning that you have to be a bit more creative when it comes to building it because it’s pound for pound damage falls behind early on. However, what the Devastator Class lacks in damage, it makes up for in survive ability, making it easily one of the best Classes when facing Bosses.

The Seismic Juggernaut Build is meant to play to the strengths of the Devastator Class by boosting Armor, reducing damage, and healing often. This allows them to stay in the thick of combat and not die where other Classes would, all while unloading into their enemies until they eventually die.

Earthquake plays a huge part in this Build because it often one shots enemies who are behind cover over a long distance, and it can go through walls and it doesn’t give a care about elevation, and will hit flying enemies or enemies above or below you as well. It also interrupts Bosses, which is what makes most of them a joke, since they can barely ever get any Skills off, allowing you to just keep firing into them relatively unscathed in many cases. 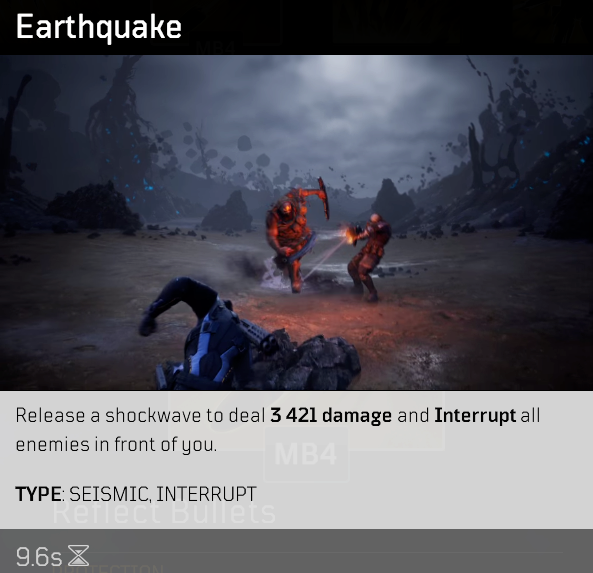 The Seismic Juggernaut is a very gear dependent Build and you will have to pay much closer attention to the gear you are acquiring in order to achieve the best results. It’s also extremely Mod hungry, meaning you can use up all your Armor Mod slots on things that boost your Skills and you’d still want more slots, unlike some other Classes that don’t need as many Class specific ones.

There are four Skills we use for this Build, swapping out one of them depending on the enemies we are facing, and those are: Earthquake, Golem, Reflect Bullets and Tremor. I’ll run you through why we use these Skills in this section, so you can see just how they work, and when to swap them around.

Earthquake – This Skill is just downright nasty, and if you have the correct Mods and good Anomaly Power it will hold up just fine through out the course of the game. It can often one shot enemies, or finish off enemies that have been weakened by Reflect Bullets. Use this to kill enemies dug in cover, or harder to kill enemies that charge you, or swarms of smaller enemies. It is also very effective at interrupting Bosses, and can wipe out those damn flying enemies with a bit of practice.

Golem – This Skill is essential to keeping you alive, and you’ll want to use this once you begin taking fire. By modding this you can extend the duration much longer, allowing you to take a lot of punishment and keep on going. You’ll need this when facing just about every single fight, so never unslot it. Coincidentally, once you gain the Paladin class passive, it will also boost your Anomaly Power by 45% when active, so you’ll hit even harder with Earthquake for 10 seconds.

Reflect Bullets – This Skill works amazingly against human enemies that fire at you with weapons, and once modded will allow you to afflict them with Vulnerability and Bleeding when shooting at you, all while protecting you from damage. Bleeding will heal you with every tick depending on how much Skill Leech you have, so you want to make sure you have a good amount. Additionally, once you gain the Blood Donation passive you’ll heal for even more!

Tremor – You’ll want to swap Reflect Bullets for this Skill when facing non-human enemies that don’t fire bullets at you. It does damage in an AoE, and if Modded can set Bleeding on all enemies hit, which will heal you as well. Get used to swapping these out, depending one what you are fighting for maximum efficiency.

Another large part of this Build is figuring out just exactly where to spend your Class Points to get the most bang for your buck. In this Section I’ll show you where I like to place mine in order to be effective, but you can vary from this a bit and still be fine. This Build focuses almost exclusively on Seismic Shifter, so let’s begin there.

The reason we go with the Seismic Shifter line is because we want to reduce the cooldowns of all of our Skills, as well as gain some Skill Leech, allowing Bleeding and other damage over time effects to heal us. Unlike other Classes that can get away with taking the top Class line because of their Round Skills, if the Devastator does this without the right gear it will not make good use of its Skills. Skills like Earthquake thrive with high Anomaly Power, and when they have faster cooldowns you can really feel the strength of this Class.

The reason we choose Assault Rifle for the first Weapon with this Build is because it has a high rate of fire, it’s relatively accurate over longer range, and it has a good amount of ammunition in its magazine. You can use whatever weapon you like for this Build, but I found this one to work the best.

I like to convert my Assault Rifle to a Tactical Variant because it has increased Stability, it has the highest per shot damage of all variants of Assault Rifle, and it still has a decent magazine size at 30 rounds. You can use any of the variants you want, but you desperately need the per round damage to be as high as possible since you have no Round buff like other Classes, so Tactical is almost a must. 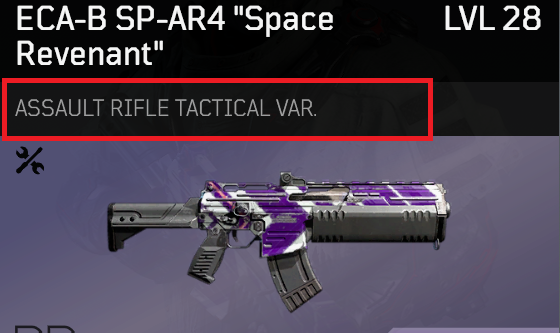 As far as Mods go, you can pretty much use what you like but Bleeding Bullets is a fantastic Mod for this Build because it will heal you whenever you set Bleeding on any enemy. Some other good Mods are Critical Point for increased Critical Chance, and Vampire which gives you 15% Skill Leech for 20 seconds whenever you kill an enemy with your Weapon. As I mentioned, Bleeding heals you based on this Stat, so increasing it will help keep you alive.

You can use whatever Weapon you wish for your secondary Weapon, and you may want to consider a second Assault Rifle with different bonuses for different situations. Since you don’t have a Rounds buff, you can switch Weapons mid combat easily, and it won’t reduce your damage like other Classes.

As I mentioned earlier, this build is completely hungry for Class specific Armor Mods, and you really cannot get enough of these. You can fill every single slot with a Class Armor Mods, and still want more, so let’s break these down by Skill to make it a bit easier.

Ground Crush – This Mod increases the damage of Earthquake significantly, and is needed to maintain the high damage of it through out the game. There is simply no other way to one shot or nearly one shot enemies with it otherwise, so this one is a must somewhere.

Extra Quake – This Mod gives you an extra use of Earthquake before it goes on cooldown. This allows you to interrupt nearly every Boss before they can use any Skills, and is one of the reasons Devastators have such an easy time against Bosses. Slot it and love it.

Earth’s Legacy – This Mod increases the already better than you’d expect range of the Earthquake by an additional 60%. It’s not one hundred percent necessary to have this Mod with this Build, but once you slot it I doubt you’ll be able to remove it. It’s just so good, and allows you to hit enemies through so many things it will become one of your favorite Mods of all time.

Perseverance – This Mod extends the duration of Golem by 100%. You want to keep this up as long as you can, so this one is very very good to have. You can get it very early on, so make sure you have it.

Golem of Death – This Mod extends the duration of Golem by 2 seconds every time you get a kill. This can drastically increase the time Golem remains active, especially when combined with Perseverance, and works particularly well when facing non-human enemies that tend to have a lot of small ones that die quickly.

Blood Primer – This Mod sets Bleeding on any enemy that fires into your Reflect Bullets, essentially dealing further damage to them while healing you in the process. It can make you nearly immortal when combined with Golem, and in some cases you might use them together if things look bad, but not often.

Hollow Point – This Mod sets Vulnerability on enemies that fire into your Reflect Bullets, allowing you to deal more damage to them with your Weapon, Bleeding and Earthquake. Try to use your Earthquakes on enemies affected with this Status Effect if possible, particularly Bosses, for best results.

You don’t really need any Mods for Tremors but if you do take some, then take ones that add more explosions like: Give Me More.

As I mentioned this Build and the Devastator in general is a bit more gear reliant than other Classes, and having the right Mods and bonuses on your Armor and Weapons can make all the difference in the world. Try to keep Armor that has Anomaly Power or Firepower on it if possible on all 5 pieces in order to get the most from them. And make sure to change your Mods around if you find better Armor. 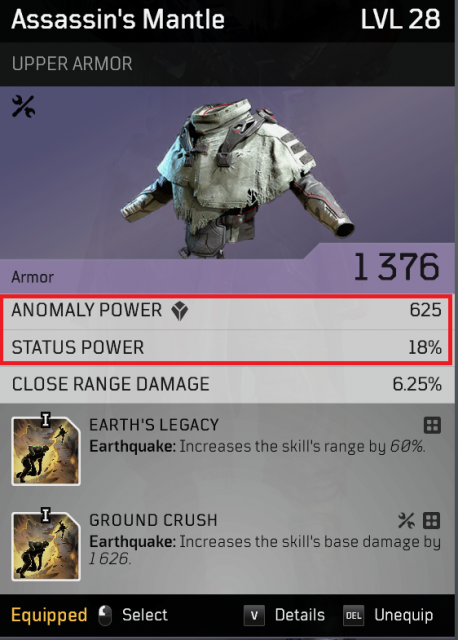 Try to alternate between Reflect Bullets and Golem when facing human enemies in order to have at least 50% damage mitigation up at all times. This will help ensure that you never die easily, and try to get bleeding on at least one target if possible in order to gain some extra healing.

A big part of this Build is staying alive when other Classes would die, and you will kill some enemies much slower than others. However, Boss fights are much much easier because you can usually just straight up tank their shots and interrupt their Skills, saving you time in the long run. Many of these fights will actually feel easier, which is a huge bonus.

Lastly, make sure to keep using better and better Assault Rifles as you find them. You need to keep your damage high in order to play this Build, and its far easier to Mod a new Weapon than it is to keep upgrading your current Weapons. So look out for new Assault Rifles that have high DMG, and not DPS, and equip and Mod them every chance you get. And don’t forget to change their type to Tactical for the most damage per shot!