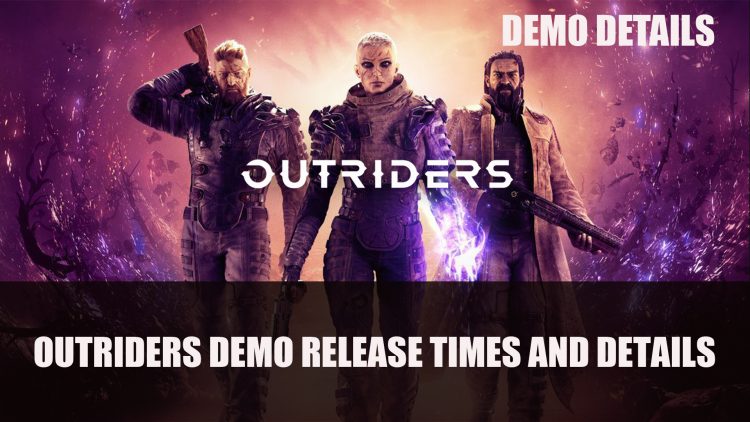 Square Enix and People Can Fly have announced details for the upcoming Outriders demo, including time zone release times, platform details and more. Find everything about Outriders here.

People Can Fly the developer behind the upcoming shooter RPG Outriders has announced more details about the upcoming free demo. The demo will go live on February 25th, and have released exact times for each time zone. The demo will be available 9 AM PST.

The Demo will release at the following times:

Those on console will have a minimum download of 22GB, while those on PC will need roughly 24GB for the demo. The demo will allow players to test out all four classes, Pyromancer, Trickster, Devastator and Technomancer.

There is also no time limit on the demo meaning you have plenty of time to test out the game, but the character level is capped at 7, which is enough to unlock two skill points and a class’s fourth ability. Progress also transfers to the full game if you choose to purchase, however not transferable between platforms such as between Epic and Steam.

Outriders will have full cross-play support, meaning everyone across platforms can co-op together. Players will also receive free game upgrades from PS4 to PS5, as well as there is support for Xbox platforms through the smart delivery system. So even if you don’t get the next-gen console by the release date, you can still pick up a copy without the worry.

Recently Outriders was confirmed to be coming to GeForce Now, the online streaming game platform for both the demo and at launch on April 1st.

Outriders set to release on April 1st, 2021 for PS4, PS5, Xbox One, and Xbox Series X and PC via the Epic Games Store and Steam. Stadia support will be coming later in 2021.

For more news find it here in Project Triangle Strategy A Tactical RPG Successor To Octopath Traveler Announced and Rumour: Diablo 4 Beta To Be Announced At BlizzCon 2021.