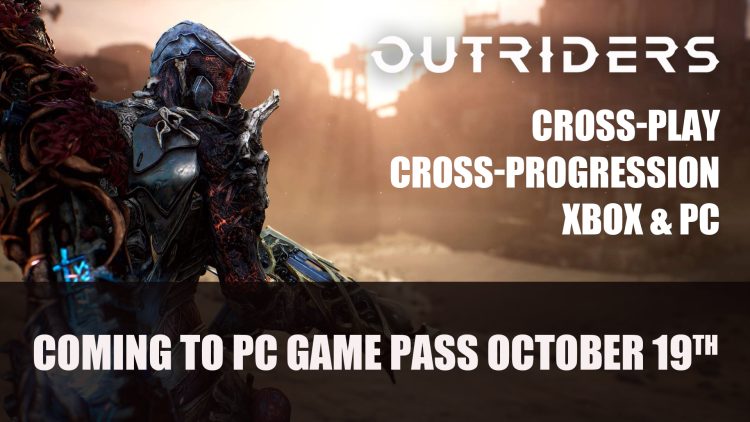 Sci-fi shooter RPG Outriders is coming to PC Game Pass this week. Outriders cross-progression will be available for Windows PC and Xbox platforms.

Developer People Can Fly has announced that Outriders will be coming to PC Game Pass this week on October 19th. Outriders originally launched for PC, Xbox and Playstation back in April this year, and now will be joining the PC Game Pass subscription plus Xbox Game Pass Ultimate service on Tuesday.

If you haven’t check out Outriders yet, it’s a co-op shooter RPG that takes players to the planet of Enoch as a “last chance”, where humanity plans to colonise after Earth becomes inhabitable. It offers four different classes to play which are Pyromancer, Trickster, Devastator, and Technomancer.  If you’re looking for some build guides to get you started check next Outriders Devastator Build Guide – Seismic Juggernaut.

If you’re already playing Outriders on Xbox One and Xbox Series X|S you will be able to transfer your progress between console and Windows versions, meaning the same account for both platforms. Progress cannot be transferred between other PC storefronts though (such as between Steam and Xbox).

You can also enjoy cross-play support, meaning teaming up with friends on platforms Xbox One, Xbox Series X|S and other platforms. To enable or disable cross-play you can select it in the settings menu.

Outriders is available on PC, PS5, Xbox Series X, Xbox One, PS4 and Stadia. It will be arriving on PC Game Pass on October 19th. Drop by our Outriders wiki for all the latest info.