In this Outriders Pyromancer Build Guide I’m going to be showing you my Ash Breaker Build, which is a Starter Pyromancer Build meant for mid-range combat. In this Guide I’ll be showing you what Skills to use, what Class Points to take, and what Weapons and Armor to look out for. If you’ve been looking for a way to improve your Pyromancer, or if you just want some insight into how to play this Class, read on to find out.

The Ash Breaker Build focuses on maintaining Volcanic Rounds in order to increase your overall damage, while also setting Burning on enemies, even if you miss them with your shots. Volcanic Rounds also pierce all Armor, as well as the target you are firing at, allowing you to wipe out large groups rather easily.

The key to this Build is maintaining Volcanic Rounds for the duration of each encounter and this is done firstly by using the Armor Mod: Extra Mag. This will help you get the most out of this Skill by allowing you a second Magazine worth of Volcanic Rounds should you screw up, but you will absolutely need Weapon Mod: Perpetuum Mobile, which refreshes your Magazine when you kill an enemy while under 35% Ammo. 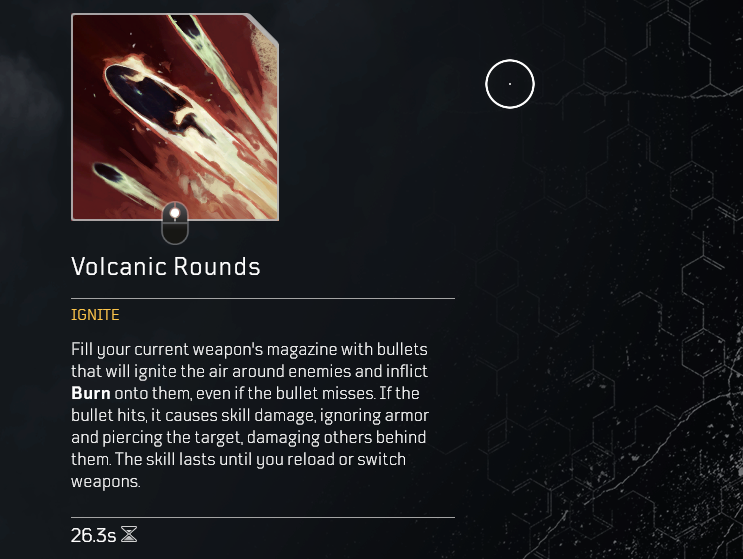 When you combine this with Ash Blast, enemies will be rooted in place, allowing you to burst them down quickly and safely. Additionally, once you’ve gained the Ashes to Ashes passive in your Class Tree, you will inflict Vulnerability on enemies who are effected by Ash. This further boosts your damage against enemies, resulting in kills very very quickly.

Volcanic Rounds – Much like other Classes, Volcanic Rounds is your ticket to victory. It not only boosts damage, sets burning, and marks enemies, but also goes through all Armor. Maintaining this buff is crucial to killing Captains and Elites quickly, and one really good thing about it is that it is boosted by Anomaly Power, and you can never have enough Anomaly Power with this Build.

Ash Blast – This Skill will shoot out an AoE around you that roots enemies in place. It has a huge range, which can be boosted even further with the Ash Increase Range Mod, and is essential for managing fights with large groups of enemies. However, this Skill works particularly well against Captains and Elites to keep them in place while you headshot them, and once you gain Ashes to Ashes it only gets stronger.

Overheat – This Skill damages enemies anywhere on the screen, interrupts them and deals even more damage if they were Burning. It’s useful for interrupting Elites and Bosses, and also buying you a little time when things look grim, as well as popping dug in enemies out of cover. It can also detonate enemies that are CCed by Ash Blast if you take the Cinders Armor Mod, which can be a deadly combo.

Eruption – This Skill causes a small explosion at the target in front of you dealing damage and damage over time. It’s a great way to deal with dug in enemies, or get rid of a small group of enemies really quickly. You can also Mod this to set Ash as well, making it more effective against Elites.

Feed the Flames – This Skill pulls an enemy towards you, deals damage and turns them to Ash. It’s a great way to heal yourself, which can be harder to do in certain fights, particularly Boss battles. Since it turns enemies to Ash as well, it is very effective against Elites, and if you use the Armor Mod: Fire Eater it will heal even more if used against Burning enemies.

Another large part of this Build is figuring out just exactly where to spend your Class Points to get the most bang for your buck. In this Section I’ll show you where I like to place mine in order to be effective, but you can vary from this a bit and still be fine. This Build focuses almost exclusively on Ash Breaker, so let’s begin there.

The reason to begin in the Ash Breaker line is because that is where most passives lie that boost your damage against Marked enemies. Pyromancers “Mark” enemies whenever they hit them with a Skill, and they heal by killing enemies that have been Marked. Tempest also has a few of these passives, but they are less effective, and it does not give you passives that boost damage against enemies affected by Ash like Ash Breaker does.

You can take Mark of the Anomaly a total of 4x in this line, increasing your own damage against any enemy you face with this Build by 40% straight up. That’s a huge amount, so make sure you take this one.

Ashes to Ashes is a must because it makes enemies effected by Ash take more damage, and this is crucial to burning Bosses and Elites quickly. You’ll also want Incinerate because it affects targets with Ash whenever they stop Burning, which is again great against Bosses you are attacking with Volcanic Rounds, as this can trigger repeatedly.

The reason we choose Assault Rifle for the first Weapon with this Build is because it has a high rate of fire, it’s relatively accurate over longer range, and it has a good amount of ammunition in its magazine. Because your shots can travel through the target, repeated shots can wipe out entire groups relatively easily.

I like to convert my Assault Rifle to a Tactical Variant because it has increased Stability, it has the highest per shot damage of all variants of Assault Rifle, and it still has a decent magazine size at 30 rounds. You can use any of the variants you want, but I found this one to be the best.

As far as Mods go, you can pretty much use what you like but Perpetuum Mobile makes maintaining Volcanic Rounds very easy, so you’ll definitely need this one. Some other good Mods are Critical Point for increased Critical Chance, and Fusion Blast which makes one round exploded for AoE damage every 1.5 seconds. These can both boost your damage even further.

For your second weapon consider using a Light Machinegun because they have larger Magazines than Assault Rifles, even though they typically deal less damage per shot fired. They work better usually against Bosses, since you almost never have to reload to kill them, unlike Assault Rifles. However, they are much much less accurate over longer ranges than Assault Rifles, so they are not as good at clearing enemies who are dug into cover (like Snipers). For this reason, your playstyle will change a bit when using them as you will run around more, and cover less. Keep this in mind and use the appropriate Weapon for the situation.

I convert my Light Machinegun to the Stabilizing variant to increase its Accuracy by a huge amount, even though it reduces its damage per shot and magazine size. And, the Mods to use here are the same as with the Assault Rifle since you use it the same way, just with more ammo and less Accuracy.

The first Mod you want for this Build is Extra Mag, which gives you a second Magazine of Volcanic Rounds. You ideally would never run out of ammo and wouldn’t need this, but mistakes happen and this can make your life just a bit easier in that event. Take it and forget about it.

Ash Range Increase is excellent for extending the distance of Ash Blast, allowing you to turn many more enemies to Ash. The range of this Skill is much further than you’d think and you can often root enemies in place from a safe distance.

If you use Overheat, Third Degree is excellent because it further boosts your Weapon Damage against enemies you used this Skill on, which is all enemies. It only lasts 8 seconds, but sometimes that enough to destroy an Elite or Captain.

One really great thing about this Build is that you don’t really need many Skill-based Mods on your Armor, freeing up slots for other Mods that can be very powerful. You won’t have many of these Mods unlocked early on in the game, so you’ll see this benefit more when you reach end game and have more Tier II and Tier III Mods.

When fighting a Boss with many enemies around it, try to burst it down first, and then focus on the other enemies if you can. If you look like you’re going to run out of ammo before doing so, switch to an easy enemy to gain rounds back in your magazine as quickly as you can, and then finish off the Boss. This Build excels at killing Bosses so you should prioritize them first if you can and make your life that much easier.

Remember not to “Reload” with this Build since you will wipe out your Volcanic Rounds if you do, and stay away from Mods or Class nodes that reward Reloading as you will be trying to do this as little as possible with this Build. The idea is that you never have to Reload and therefor never lose your Volcanic Rounds buff. You will still have to Reload now and then, but you certainly don’t want to plan for it. 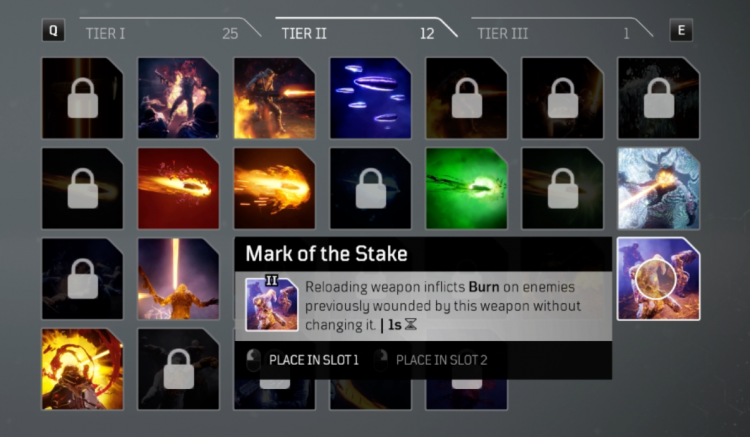 Don’t be afraid to use Ash Blast every single time it is off cooldown, even if you’re only facing one tough enemy like an Elite. It will CC an enemy for a couple seconds, allowing you to get easy headshots. Learn to use this often, as it makes all the difference in the world.

Lastly, make sure to keep using better and better Assault Rifles and Light Machineguns as you find them. You need to keep your damage high in order to play this Build, and its far easier to Mod a new Weapon with Perpetuum Mobile than it is to keep upgrading your current Weapons. So look out for new Assault Rifles and Light Machineguns that have high DMG, and not DPS, and equip and Mod them every chance you get. Oh and don’t forget to change their types to Tactical and Stabilizing too!