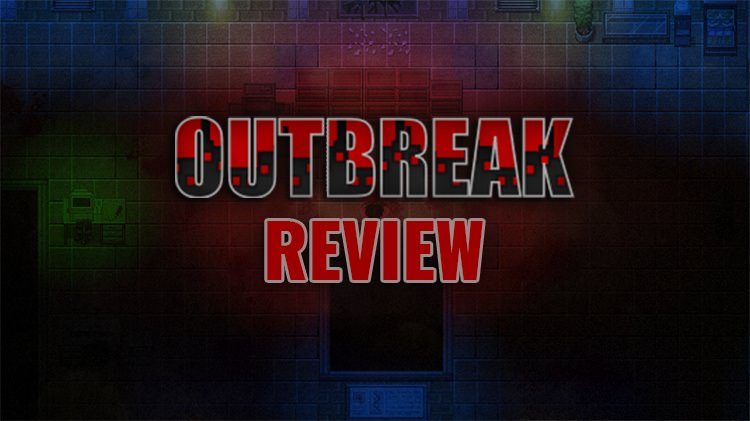 Outbreak is a top-down survival horror shooter. At second glance, my thought was this was Hotline Miami with zombies. I say at second glance, because at first glance I couldn’t really see anything. Despite having a nice big monitor, I tend to watch game preview videos on Steam minimized, as I am also scanning the other information on the game page in my own personal “get a sense of it” routine. In that mode, looking at the videos and screenshots for Outbreak¸ it looked like black with some muted purple and red smears. 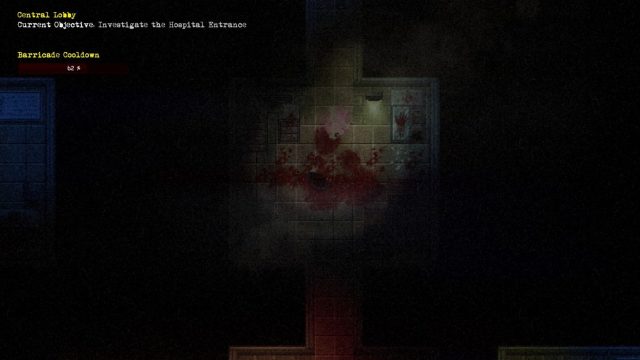 Not the easiest game to screenshot, this one.

You should not be put off by this first screenshot, because when playing the game (hopefully you also have a nice, big monitor), the game creates a very nice visual atmosphere. Despite the fact this is an indie title which title screen has large blocky bloodstains on its lettering and a pixelated city backdrop, the in-game graphics are smooth and tidy. Characters and monsters are rounded like Prison Architect ­rather than the pixels of Hotline Miami. And indeed those muted colours are a far cry from the neon shriek of Hotline Miami. So why that second impression? 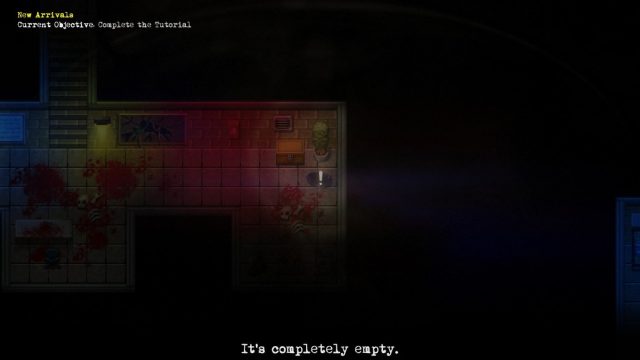 My character managed to walk past numerous mutilated corpses on the floor before finding a point of interest. A chest. Which is, as the screenshot says, completely empty. So, the bodies are not a problem, then, eh, Mason?

Largely, because it’s top-down, involves shooting, and makes very clear the intended difficulty: you have one life and limited time in which to plan your strategy for rapid transit of each level. You should expect to die, even more so if you loiter. That reads like Hotline Miami’s design document. However, if that game was any form of inspiration for the sole developer of this game, it’s well hidden. Outbreak very quickly reveals its homages and inspirations, and wears them on its tatty, bloody sleeve at all times: it’s Resident Evil as done by a one-person studio. 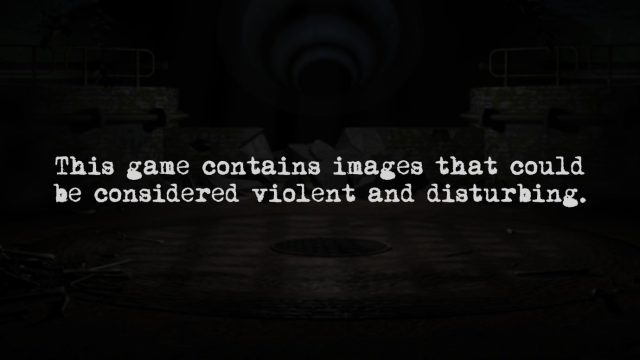 The introduction story is right out of Racoon City’s unfortunate history book, down to the “tell don’t show” written backstory that looks like Resi 2. Pressing ‘start’ results in an ominous tone and a voiced “Outbreak,” just like the first Resident Evil, particularly the Japanese original which intoned “Biohazard.” The hardest difficulty mode is actually called “Biohazard” and features a relentless stalking enemy which cannot be killed but only outmanoeuvred. And perhaps somewhat predictably, there is a ‘Master of Unlocking’ achievement. 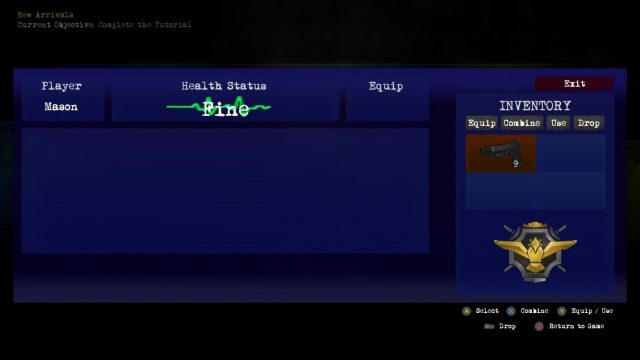 The inventory and health overview screen is startlingly original. My only suggestion would be to change that eagle badge in the bottom right to, oh, I don’t know. Stars or something.

There is also four player online coop, which should prompt also comparisons to Left 4 Dead or Killing Floor. Except those titles are focused on mobility. This isn’t. Despite the four player mode, it’s still Resident Evil. Aiming means you stop and cannot move. Turning around is a laborious rotation; no quick 180 degree turns here. 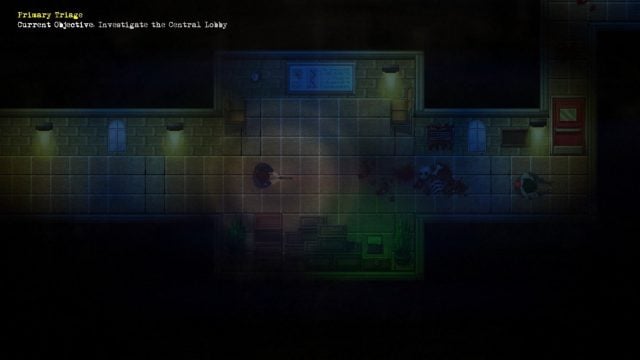 Fortunately, the zombies are as unable to turn around as you are. However, they are, you know, zombies. What’s your excuse? Inner ear infection?

So the question is: does that work? If you found the ability to walk and shoot at the same time in Resident Evil 4 a revelation and can never go back to being a rotating tower, probably not. If you have fond nostalgia for the old Resi controls, you’ll probably buy into it here as a strategic consideration and part of the challenge of the game. 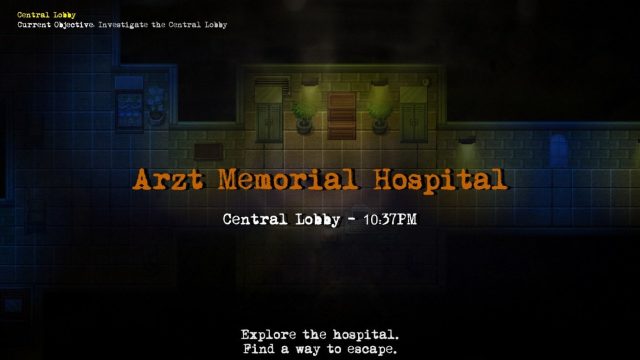 That’s a shame, I remember many a joyful summer spent in Arzt in my youth.

Personally, I was also thrown off by the tutorial. In this introduction level, you spend some time exploring before getting into an area with endless zombies. However, the main game is just the constant pressure of infinite enemies. That’s no bad thing, but I was expecting a balance of exploration and panic which I think I would have enjoyed. 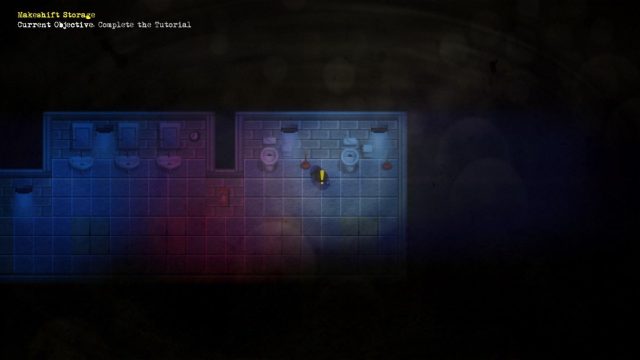 Mason registers surprise at the cleanliness of the toilets. I’m not kidding.

However, once I got into it, I got it, and found a surprising amount of depth. Inventory space is limited, so you cannot simply fit the arsenal of a small nation into your pockets. Combat is the aforementioned Resi style, so you must learn the rhythm of your trigger and inventory-based reloads on the fly. There are melee weapons, such as knives and axes, which do differing amounts of damage, and all of them are easier to use to keep monsters at bay than firearms. However, they will break after a number of uses. There are also coloured medicines, which, while not actual herbs, will be familiar in their effects and need to combine for different results. The limited inventory space and need to heal, fight, and have keycards will lead to you dropping important items by memorable landmarks, although the automap does helpfully keep track of these for you as well. 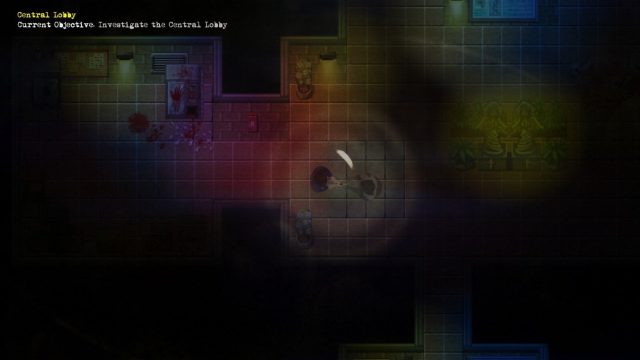 Axes are your friend.

Perhaps the most ingenious addition, and the mechanic which in the end makes sure it all works, is the ability to drop a barricade. You can’t just hole up in a room, as you will not be able to progress and eventually run out of supplies as the monsters knock them down. However, they can buy you a precious few moments to reload, or simply turn around. 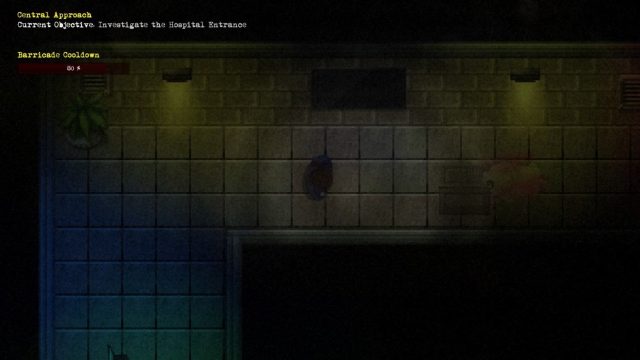 The barricade holds up Pink Fido just long enough for me to reload. Wait, why is Pink Fido a problem again?

While there is depth in combat and level planning, there is no depth in the ‘puzzles,’ which really aren’t puzzles at all. A door needs a red keycard, so you go get the red keycard. However, again, that’s not really a criticism as in the pace of the game there really would not be time for real puzzles. 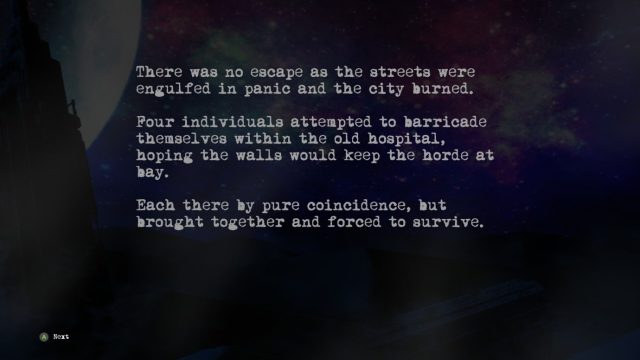 OK, not to be nit-picky or anything, but if the survivors barricaded themselves in the hospital in order to survive, why are we now trying to break out of it again?

The developer promises that no two playthroughs will be alike, however, this is because ammo and enemies will spawn in different places. The maps and the main quest items however are always in the same place, and this is necessary as the approach to this game is very much to learn the ultimate layout of each level through multiple deaths and make it through the next time through a combination of new knowledge and point-in-time reactions. As I played this on a review copy, multiplayer servers do not seem to be up (at least I could not find a game) and it will be interesting to see how the camera works in multiplayer. However, in single player mode, it has a Spelunky­-like moreishness that will see multiple ‘one-last go’ attempts at besting its levels.

7
Summary: Surprisingly well-designed with a balance between inventory management, level-wide planning and on-the-fly judgement calls. You don’t buy this for the story. For an indie title over USD 10.00 there’s enough here to keep you playing longer than you think. Multiplayer was not tested at time of review.
Story & Setting (4)
Gameplay (7)
Visual & Audio (7)
Replayability (8)
Pricepoint (7)