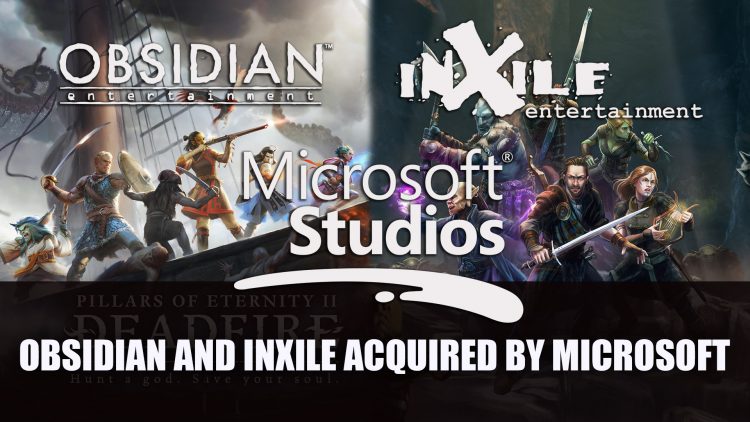 Remember that rumour that was floating around about Obsidian and Microsoft? Well turns out that it is absolutely true along with inXile Entertainment, in special announcements they share that they have been acquired by Microsoft.

The special announcement video confirmed the earlier rumours about Microsoft considering Obsidian as their next acquisition. Sure enough, the developer known for such RPG games as Pillars of Eternity II: Deadfire and Fallout: New Vegas, are joining Microsoft Studios. This venture works well in Microsoft’s favour as they get a studio that works on RPGs, giving their platforms PC and Xbox One a chance to develop more titles in this genre.

But that’s not the only studio to be joining Microsoft Studios, inXile Entertainment has also been snapped up. inXile’s is known for such titles as Wasteland and most recently The Bard’s Tale IV: Barrow’s Deep.

You may be wondering as they join forces what does this mean for the future? Well Microsoft did leave a bread crumb or two for their plans in an official statement on the Xbox Press site:

While they do share a common heritage, the two creative teams at Obsidian and inXile are very different. They will continue to operate autonomously with their unique talents, IP and expertise. As part of Microsoft Studios, Obsidian and inXile will have the support and freedom to fully realize their creative ambitions on both existing franchises and new RPG projects.

Both studios will continue to produce RPG projects which seems to be the reason why Microsoft were so keen to acquire these studios. It has been quite a busy year for the company also acquiring Playground Games, Ninja Theory, Compulsion Games and Mojang, they now have 13 different developers working under Microsoft Studios.

CEO Brian Fargo of inXile Entertainment also backed up Microsoft’s vision of RPG development in their announcement video, and assured fans that they would continue with producing RPGs:

The reason this is great for the fans is that now my team and I have the opportunity to improve our production quality in ways that we’ve never had the chance to before. Of course, we’re gonna continue doing role-playing games.

You can watch both announcement videos below:

What do you think of this news? Let us know in the comments below.

If you want to read about recent Obsidian games find it here in Beast Of Winter Pillars Of Eternity 2 Deadfire Review – Dimensional Contingency. For a rundown of the latest news find it here in Top RPG News Of The Week: November 11th (Diablo Immortal, Red Dead Online, FFXV And More!).