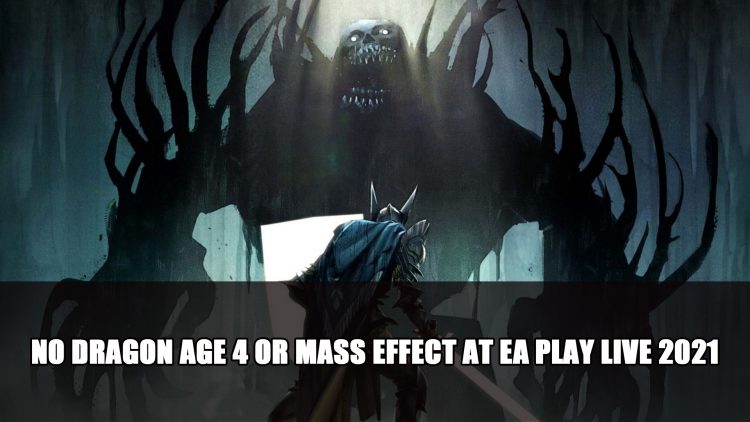 Bioware have confirmed that there will be updates for Dragon Age 4 or for the new Mass Effect title at this year’s EA Play Live 2021.

Bioware have confirmed that we won’t be seeing any updates for upcoming Dragon Age 4 or the new Mass Effect game in this month’s EA Play Live 2021. In a recent tweet, Bioware shared while there would be updates for Star Wars: The Old Republic which got a 10 year anniversary live stream today, neither Dragon Age or Mass Effect will be seen at EA’s next livestream.

Dragon Age 4 has been getting some frequent updates here and there, but is still a long way off from release by the looks of things. The most recent update being for some Dragon Age 4 concept art teasing the Grey Wardens, as well as previously revealed details that it will be a single-player title with “no live service”.

We’re hard at work creating the next @dragonage and @masseffect games and have some exciting stuff coming to @SWTOR this year. While we won’t be showing anything at EA Play Live, be sure to check out our SWTOR Livestream at 12PM PT today for info on what’s to come!

As for the new Mass Effect game, it was first revealed in a teaser trailer during The Game Awards 2020. The trailer shows a snowy region where the character Liara, one of the companions from the previous Mass Effect titles, discovers a piece of metal scrap where she uncovers the N7 logo, the Normandy iconic logo. There has been no release window announced as of yet.

As for what has already been confirmed for EA Play Live, it will cover Battlefield 2042, Apex Legends, EA Originals as well as Madden NFL 22. The broadcast will begin on 1 p.m. EDT/10 a.m. PDT on July 22.