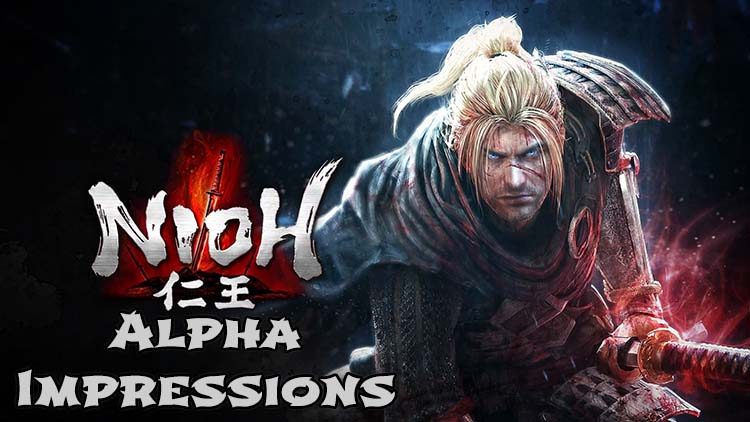 Having spent a good amount of time this past week playing with Team Ninja and Koei Tecmo’s new project, Nioh, I thought I would do a quick rundown of the things we’ve learned about the game. If you did not get to check out the Alpha Demo of this intriguing new PS4 exclusive, stay tuned as there will hopefully be a beta in the not too distant future.

Not too much is currently known about the story. The game takes place in feudal Japan in the 1600’s and you play as the pale, white-haired protagonist named William, who looks strikingly similar to Geralt of Rivia (The Witcher). There was no option for character customization, so that most likely will not be in the full version of the game as it seems we are fated to play out William’s story.

The land seems to be overrun with samurai, ninja and Yokai which are supernatural monsters, spirits and demons of Japanese lore. Why and how exactly they arrived is a mystery, but pieces of the puzzle are left behind on the corpses of fallen soldiers. If you have played Hunted: The Demon’s Forge (2011), it works similarly by telling a bit of the person’s story, via narration, when you loot their bodies. There are also very lore heavy item descriptions for nearly every weapon and armor piece, helping to further unravel the plot for those paying attention. I get the feeling the story and lore will be cryptic and left for the player to discover or ignore, similar to the way Dark Souls handles its storytelling. 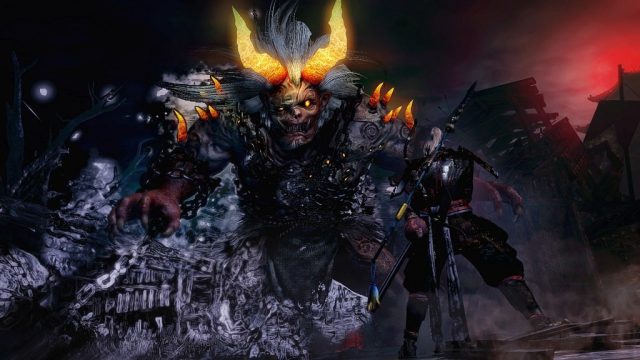 The game is subdivided into missions, some of which the player must complete to advance the game. These Missions have level recommendations, but meeting them is not required. The game itself is quite difficult however, so I highly suggest you follow this recommendation! Because of the limited amount of Missions available in the Alpha, it remains to be seen just how linear Nioh is. We won’t know how many paths there are to take until release, but I think it’s fair to expect a mostly linear experience with a few Side Missions tossed in to keep it interesting. 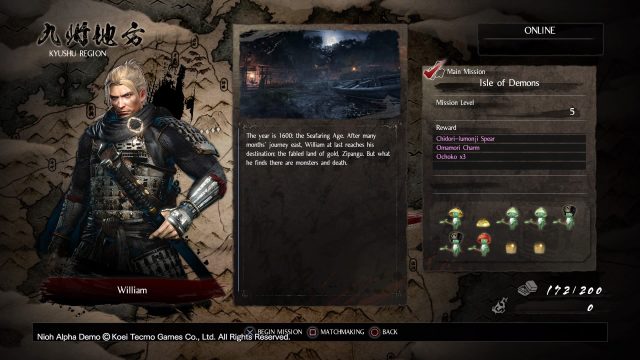 Level design in the Alpha was dark, gritty and downright brutal. Locations look completely destroyed by war, yokai, and god knows whatever else is out there. Buildings were aflame, corpses were strewn about and a general feeling of hopelessness saturated the environment, which made me feel like any success would be fleeting.

Each Mission has a Shrine or 2 that acts as a checkpoint where the player can sell items, change Guardian Spirits, purchase area bonuses and summon another player to help them. Just like Dark Souls, resting at these Shrines replenishes your health and healing items and also respawns enemies in the level. There are shortcuts that, once unlocked, allow the player to bypass a chunk of the Mission, especially when approaching the boss. Again, this is very similar to Dark Souls. The developers seem to acknowledge that with as difficult as the levels and bosses are, any little bit helps. 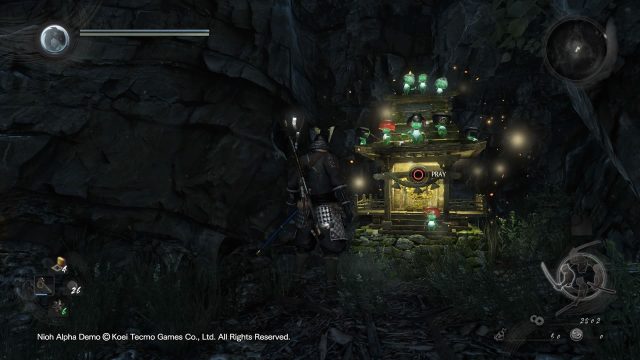 Each Mission ended with a Boss and these bosses are very challenging and will definitely test the patience and skill of the player. They are easily on par with Dark Souls in terms of difficulty and they will take players many attempts to learn their patterns and defeat them. You do, however, get a strong sense of accomplishment for defeating them and that is one of the best feelings in gaming. They also drop random loot that can vary in quality, making farming them worth while, which you can do by helping other players in their worlds.

The loot system is mostly random and adds an interesting Diablo like element to the Bloodborne esque gameplay. There is fixed loot on certain corpses through out the game, but for the most part it’s completely random. Not only are the drops randomized, but the stat bonuses on weapons and armor are as well. Weapons and armor have qualities from common, uncommon, Rare and One of a Kind. The higher the quality of the item, the more bonuses it possess as well as typically higher damage or protection. Because weapons and armor have levels (like Destiny), this is not always the case, and often you will find a level 20 common Katana that does more damage than a level 12 One of a Kind. You may have to farm quite a bit to find the perfect weapon that possesses the bonuses you desire which will delight some people but bother others. Fortunately, in the demo at least, loot drops were plentiful and finding useful gear was not a chore at all. 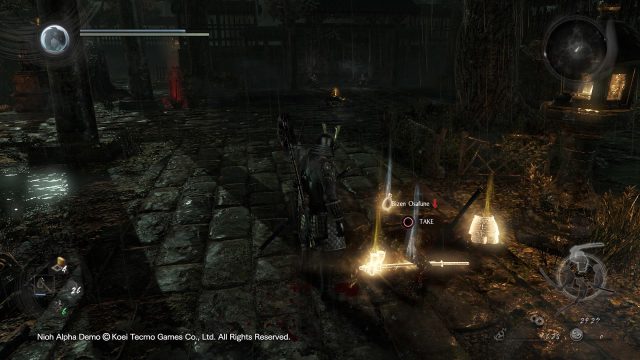 The gameplay in Nioh is somewhere between Bloodborne and Ninja Gaiden in terms of speed, and frankly you’re either going to love it or hate it. I was not a huge fan of it at first, but the more I played and the more I learned, the more it grew on me to the point where I was hopelessly addicted. The game has a leveling system that is almost identical to Dark Souls, where you kill enemies to acquire Amrita (experience) and then you use that at Shrines to invest in one of 8 Stats. Each Stat does something different and they all have their uses. If you die while on a Mission you leave your Amrita on the ground where you fell and it is guarded by your Guardian Spirit until you return to claim it. 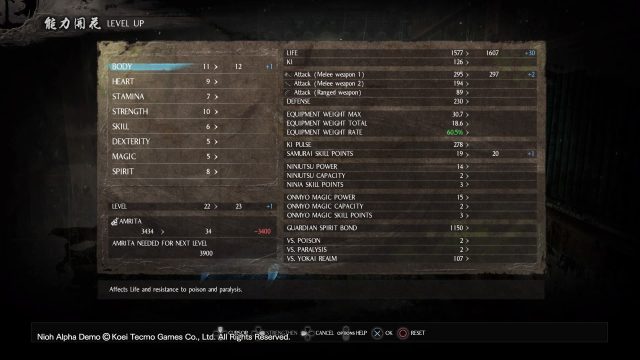 A unique aspect of the game, is the Guardian Spirits that the player can choose from that provide passive and active bonuses. Each has an element (fire, wind, water, lightning, earth, etc) associated with it, and each has very different benefits. Players can activate their Guardian Spirit when their gauge in the upper left hand corner is filled and flashing, and this will allow them to unleash devastating attacks for a short time. This gives players a tool to get past very difficult encounters or mini bosses, of which there were many in the Demo. When you die, this spirit protects your Amrita until you return but you lose the passive benefits and ability to call upon it in battle until you reclaim it. It is also possible to retrieve it at any Shrine for the cost of the Amrita laying where you last died, but if this is a large quantity it may not be worth it. 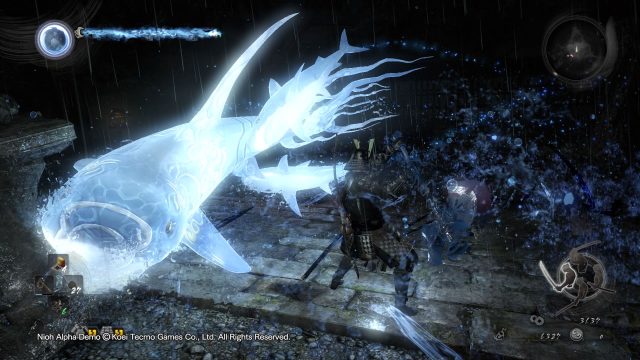 Combat is fluid like Bloodborne, but faster. Players can chain combos, learn new combos and change to High, Mid or Low stances with each weapon type, providing a good amount of variety to each weapon. This is a good things too, because there are only a few types of weapons in the game: Katanas, Spears, Axes, Hammers and Bows (Bows do not have stances). Players will have to learn to manage their Ki (stamina) diligently, perhaps even more so than in Souls games, because mistakes are punished harshly. Enemies deal massive damage from even the simplest attacks, healing items are scarce, and being outnumbered more often than not means certain death.

There are skill trees in the game for each weapon type that allow for new combos and moves, as well as Onmyo Magic and Ninjustu skill lines. Magic allows for a small selection of spells (mostly weapon buffs) and Ninjutsu allows for the use of some projectiles that deal significant damage. Putting points into these stats allows for stronger Magic and Ninjutsu abilities. You can also Block, Parry and Riposte during combat. You will learn when and where to use these the more you learn how they all apply situationally. In all, players are presented with an ample amount of solutions to these challenging missions. 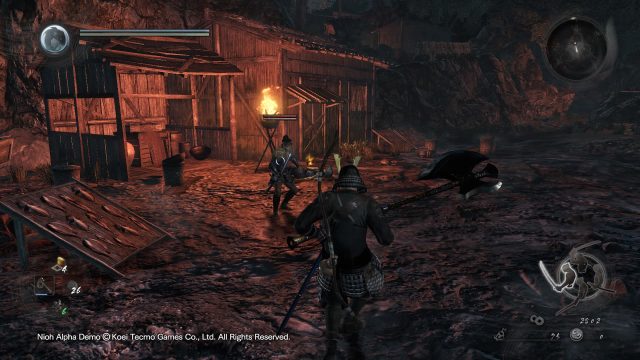 Nioh, thankfully, does feature co-operative multiplayer online. You can summon a player into your world at any Shrine by using an Ochoko. It is a consumable item similar to an Ember or Humanity from Dark Souls, however, it is only consumed if a player arrives in another player’s world. Players can also summon you to help them if you use the matchmaking option on any Mission in the overview screen. We do not yet know if you can PvP other players, but we do know that if you touch the bloody mounds of dead players in your game world, you can duel their avatars, called Revenants, for experience, loot and a chance to acquire an Ochoko. 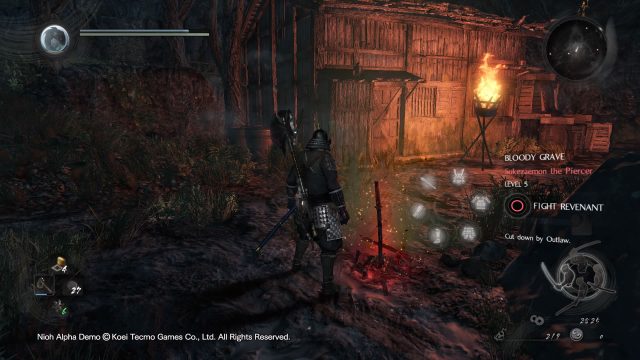 Unfortunately the multiplayer system did not work very well in the demo. I tried to summon players repeatedly with almost no luck. I did manage to get one player to come help me near the end of the first Mission, but the lag was so bad with him in my game that I could hardly move (that’s not an exaggeration). The few times I was summoned, the lag, although better, was still bad enough that things were skipping across the screen causing me to die twice to phantom hits. They have a long way to go in this area if the multiplayer is going to be even remotely functional on release. 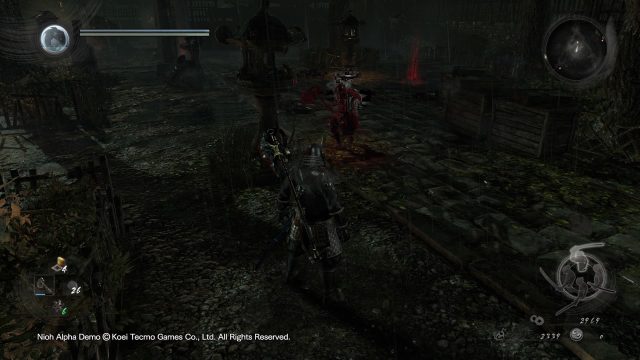 Nioh takes many things from Dark Souls and Bloodborne and mixes them in with the Ninja Gaiden, delivering a game that has serious potential and may expand past the niche market it was originally intended for. If Team Ninja can polish up the game a bit, deliver more of what we saw in the Alpha and get the multiplayer to function even just a majority of the time, I can see this game make strides into a market that Dark Souls has held uncontested dominance over. This game gives me hope that developers other than From Software can deliver the type of high quality, addictive RPG that only Souls could bring us before. I can’t wait to see more when it releases later this year!