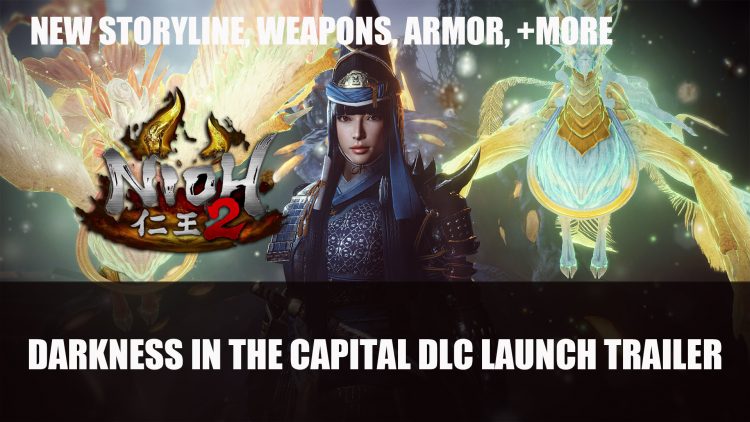 Publisher Koei Tecmo and developer Team Ninja have released a new trailer for the DLC Nioh 2 Darkness in the Capital.

The new DLC which releases this week Nioh 2: Darkness in the Capital has gotten a new launch trailer that features the new expansion. The DLC which launches on October 15th includes a brand new storyline, a new weapon type, a new higher difficulty level, plus new Yokai, Soul Cores and Yokai Abilities. There are also new Guardian Spirits, weapons, armor and more.

In this new expansion players will head to Kyoto where a shrine will transport them to the Heian Period. It is here where they will be joined by some heroes, to team up and fight hordes of Yokai.

The DLC is available as part of the Season Pass which is currently avaialble for $13.99, or can be purchased separately for $9.99. The season pass contains three DLCs, The Tengu’s Disciple, Darkness in the Capital and The First Samurai. Those who have the Nioh 2 Deluxe Edition will already have the Season Pass, so be wary of duplicate purchases.

Nioh 2: Darkness in the Capital launches on October 15th. Nioh 2 released earlier this year and currently available to play on PS4. Don’t forget to check out our Twitch channel to watch us check the new DLC come launch day.

For more news be sure to read next Torchlight 3 For Switch Releases October 22nd and King Arthur: Knight’s Tale Tactical RPG Kickstarter Announced For Consoles And PC.