In this Nioh 2 Build Guide I’m going to show you how to play the Watery Devotion Build using Medium Armor, Onmyo Magic and the new Splitstaff weapon, pummeling things into oblivion via repeated strikes. I’ll be showing you where to place your Stats and Skill Points to get the maximum impact for this Build, as well what equipment to use, and which Guardian Spirit and Soul Cores to have. This is a late game Build meant for players that are at or near the end of their first playthrough of Nioh 2, but can be adapted for newer players too with different equipment. Note: This Build is updated to the 1.12 version of the game.

The Watery Devotion Build uses a combination of Water magic, and the newly added Splitstaff Weapon to deal decent damage to enemies while tanking anything they can dish out. Splitstaffs scale primarily from the Magic Attribute, so this makes for a nice combination of spells and melee. 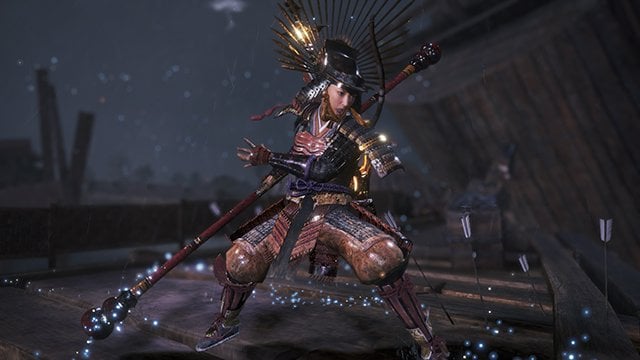 The biggest issue with the Splitstaff weapon type, is that it uses a ton of Ki for its attacks, making it difficult to attack and then Block or Dodge. With this Build we rectify this problem by getting our Toughness stat to 200, making Blocking much more effective. Additionally, a large investment into Courage not only improves weapon damage, but also increases Ki Recovery Speed, helping to alleviate this issue. And finally, by using the skill Unruly Revolution, which consumes almost no Ki at all.

If you want to use the Splittstaff, but you’re not quite sure how to use it, then this Build is a good place to begin.

For the Watery Devotion Build you’ll need primarily: Magic & Courage. Magic to increase your weapon damage the most, while also buffing your spell damage, and Courage for further weapon damage and Ki Recovery. However, you’ll also need some Strength and Constitution for Armor requirements, and some Stamina if you wish to get your Equipment Weight below the 70% threshold. This last part is optional though, because you can function just fine even without the investment into Stamina.

Once you meet the requirements for your Armor, alternate between Magic and Courage with your Points in order to get some valuable Ki Recovery. Ki management is important to this Build, and even though Magic increases your damage more than Courage, you will struggle without the Ki Recovery. Boost both Magic and Courage for best results.

Because we’ll be using Onmyo Magic for this Build and there are only three weapons that scale off of it, it makes sense to use one of them. Since we already made a Build with the Switchglaive and Hatchets, we’ll use Splittstaff here, though you could make a similar Build with either of these two Weapons, only with slightly different stats.

For this Build we’ll be using the Splitstaff, and it’s not super important which Staff you use, but you’ll want it to have Water Damage if you can so that it can set the Saturated Status Effect without having it buff if possible. If it doesn’t have this, it’s not the end of the world, but you’ll be slightly less effective in some cases. You’ll want the Great Chidori Cross Spear in your second slot simply for the passive Set Bonus. 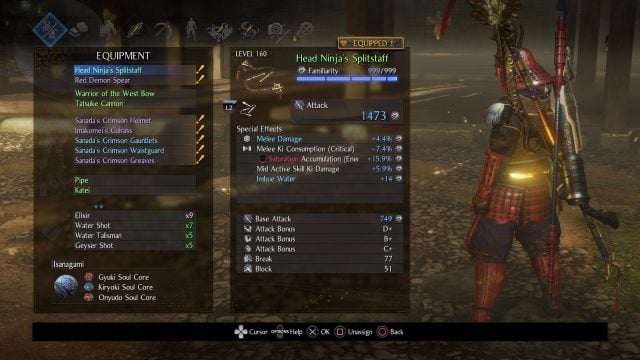 You’ll want to look for bonuses to Active Skill Damage, Melee Damage, Saturation Accumulation and Block or Mid Guard Ki Consumption. The idea here is you want things that are going to boost your damage with Unruly Revolution, and things that will improve your Block effectiveness. Break is also not a bad option, because getting through the Guard of some enemies can be a pain in the butt.

For Ranged Weapons you’ll likely want a Rifle and Hand Cannon since both scale with Courage. Look for bonuses that increase their damage as much as possible since you want one shot, one kill.

When it comes to Armor for this Build there really isn’t anything that directly benefits this style perfectly, which is why I chose The Red of Devotion set. It increases your Melee Damage, Block, Break, Life and makes it so that you’re Never Winded 50%. All these things are nice to have here, and the added damage from getting hit doesn’t hurt either, since you will be hit sometimes with this Build. 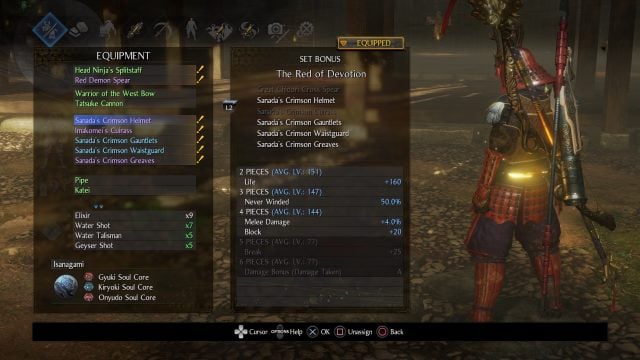 Additionally, The Red of Devotion is a Medium Armor set, which allows us to get to 200 Toughness (A rating) with some tweaking, and fits nicely with our stat spread, since we don’t need the Skill Attribute that Light Armor requires, so this is not wasted. However, you don’t have to use this Set, and you can use any one that provides 200 Toughness when added with your other sources of Toughness, for maximum efficiency in Blocking.

Bonuses you want on your Accessories are Ki, Saturation Accumulation, Extended Elemental Weapon, Water Damage (or Elemental Damage), Omnyo Magic or Untouched Omnyo. You won’t be able to get all of these, but I’ve listed them in order of priority. You need Ki to Block and attack, you want to Saturate enemies quickly to boost all further damage, and you want Extended Elemental Weapon since you use this often. Water Damage or Elemental Damage boosts spells mostly, and Onmyo Magic does the same. Untouched Onmyo will allow your spells to go further since it won’t consume a use sometimes.

Where to place your Skill Points is a vital part of making any Build in Nioh 2 work, and in this section we’ll take a look at the things you need to create the Watery Devotion Build. Since all Nioh 2 players use Samuari Skills, let’s begin there before we take a look at Splitstaff, Shifting and Omnyo Skills.

You’re going to be using Mid and High Stances for this Build, so you want to take Ki Pulse: Heaven, Running Water: Heaven, Ki Pulse: Man, and Running Water: Man for sure. One great thing about this Build is that by taking these you can Purify Yokai Realm without having to Ki Pulse the traditional way, but can instead do so by Dodging. You’ll also want Damage Boost: Magic to slap on your Unruly Revolution so be sure to get it as well. 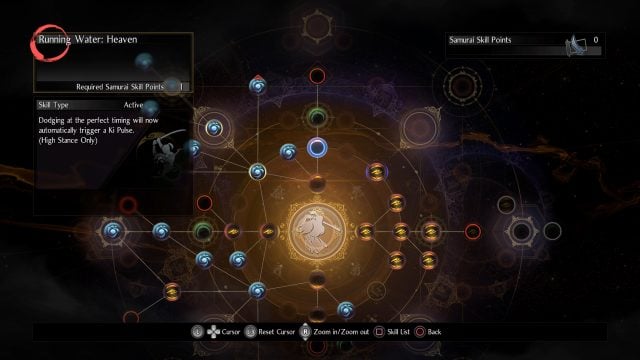 The first skill you want to get as quickly as you can is Unruly Revolution, which will be your primary source of damage, especially against Bosses. Relentless is important to gain some more Ki, and you want to get Shadow Strike and Seven Stars  Kata for increased damage. Anything else that increases damage pick up and you’ll want Law of Lethality for your Mystic Art to further increase the damage of Unruly Revolution.

When it comes to Shiftling Skills you’ll want The Yokai Within and The Dark Within to help with Ki Recovery when fighting Yokai or in the Dark Realm. Special Finesse: Invigorate will increase your Ki Recovery after using a Burst Counter, and Special Finesse: Refresh will replenish a ton of Ki after performing one, so be sure to get these when you can. Everything else is completely optional.

Guardian Spirits play a pretty large role with most builds, particularly when you are min/maxing. For this Build I recommend a Brute Guardian type because you will be up in the face of an enemy more often than not, and you need a Burst Counter that can interrupt any Burst Attack done. Some have really long wind ups, or don’t hit you directly, making the Feral Guardian a less ideal choice since you will be in range nearly all the time anyway. Additionally, you’ll gain Anima from Blocking with this Guardian type, which is perfect for a Build that Blocks a lot. 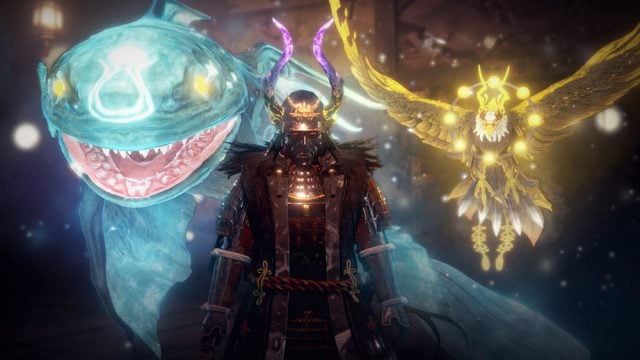 The Primary Guardian Spirit I like for this Build is Isanagami. It’s a Brute Guardian type, it grants extra melee damage against Saturated enemies, gives you more Health, and gives you an attack boost after you heal. It also has 24 for its cap on Soul Cores, allowing you to use just about anything you want in it. You don’t have to use this one, but just make sure you use a Brute Guardian type.

The Secondary Guardian Spirit I like to use is Rokugezo because it provides 10 Toughness which helps us get over that 200 mark for an A rating. This helps with Blocking tremendously and we can’t reach over 200 any other way (unless we use different Soul Cores) with The Red of Devotion as our Armor. If you’re using a different Armor set, and have at least 210 Toughness, swap this out for something else. 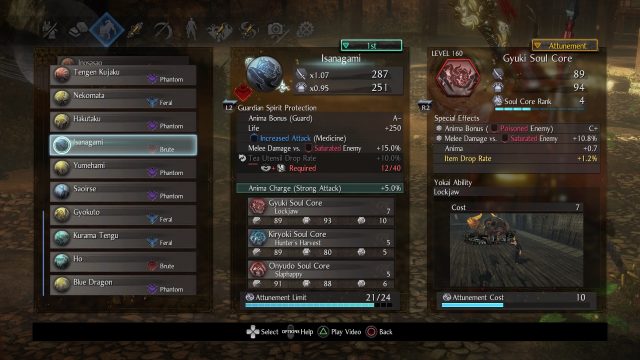 When it comes to Clans there are three I like for this Build and those are Honda, Murakami, and Chosokabe. Honda increases your Unruly Revolution damage, while at the same time reducing the damage you take when you’re at full health. Murakami makes you steal health when you hit with Water Damage and increases this damage by 10%, which is nice for both weapon and spells. And, Chosokabe increases the Attack and Defense of Splitstaffs as well as provides Singular Mastery, which increases your damage with Unruly Revolution if it’s the only skill set to that Stance. You can’t go wrong with any of these.

This is a very defensive Build that uses Block in order to absorb attacks, before unleashing a series of hits of its own by pressing square while still Blocking. This works exceptionally well, since you don’t need to let go of Block to attack, and you’ll be up close where you need to be. Play defensively and look for your openings to counter attack, letting the enemy make the first move when you can. 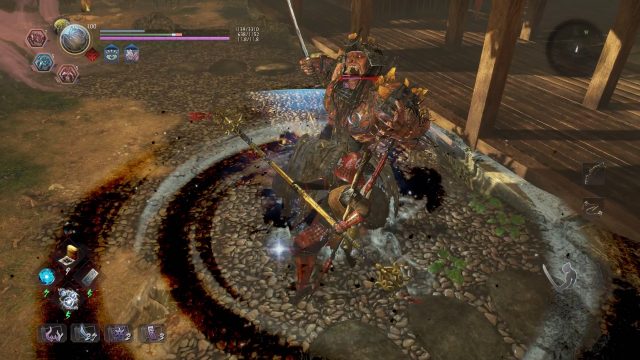 You can hold “square” down while Blocking for increased range, and more damage once you’ve obtained the Mystic Art Law of Lethality. This makes this Build even more effective, so make sure you use this when you can for best results.

Use your Anima on your Yokai Abilities often. Use Onyudo when you are low on Ki to extend your combos while it replenishes. Use Gyuki when you are at range and have the space to do so, to poison dangerous foes and deal substantial Ki damage. Avoid using Kiryoki since it is the least effective of the 3 when you can, but it does have range, so it can serve as a cheap ranged attack.

Lastly, I have not included many bonuses for this Build that reduce the Ki cost of things even though Ki management is huge problem when using the Splitstaff because Unruly Revolution costs nearly nothing, preventing the need, and allowing you to focus on damage. However, if you decide to play with other Abilities or just strictly combos, you’ll definitely need to add more as you won’t be able to manage your Ki otherwise. Keep this in mind when deviating from this setup.