In this Nioh 2 Build Guide I’m going to show you how to play as a Mage/Tank that uses Lightning to buff its attacks and deal damage to enemies. I’ll be showing you where to place your Stat and Skill Points to get the maximum impact for this Build, as well what equipment to use, and which Guardian Spirit and Soul Cores to have. This is a starter Build meant for players just beginning Nioh 2, or for those that are early on in the game and are having trouble. This Build will be updated as I reach higher levels of the game and more equipment becomes available.

The Golden Scythe Build uses a combination of Lightning Onmyo Magic and deadly combos and Skills to take down enemies from point blank and at range. Because this Build uses Heavy Armor, you can tank hits and keep on swinging, taking drastically reduced damage while not being interrupted. This is important because the Switchglaive doesn’t always have the fastest moveset, especially when in High Stance, which you will use frequently as it’s vertical attack hits the weakspot of many Yokai. 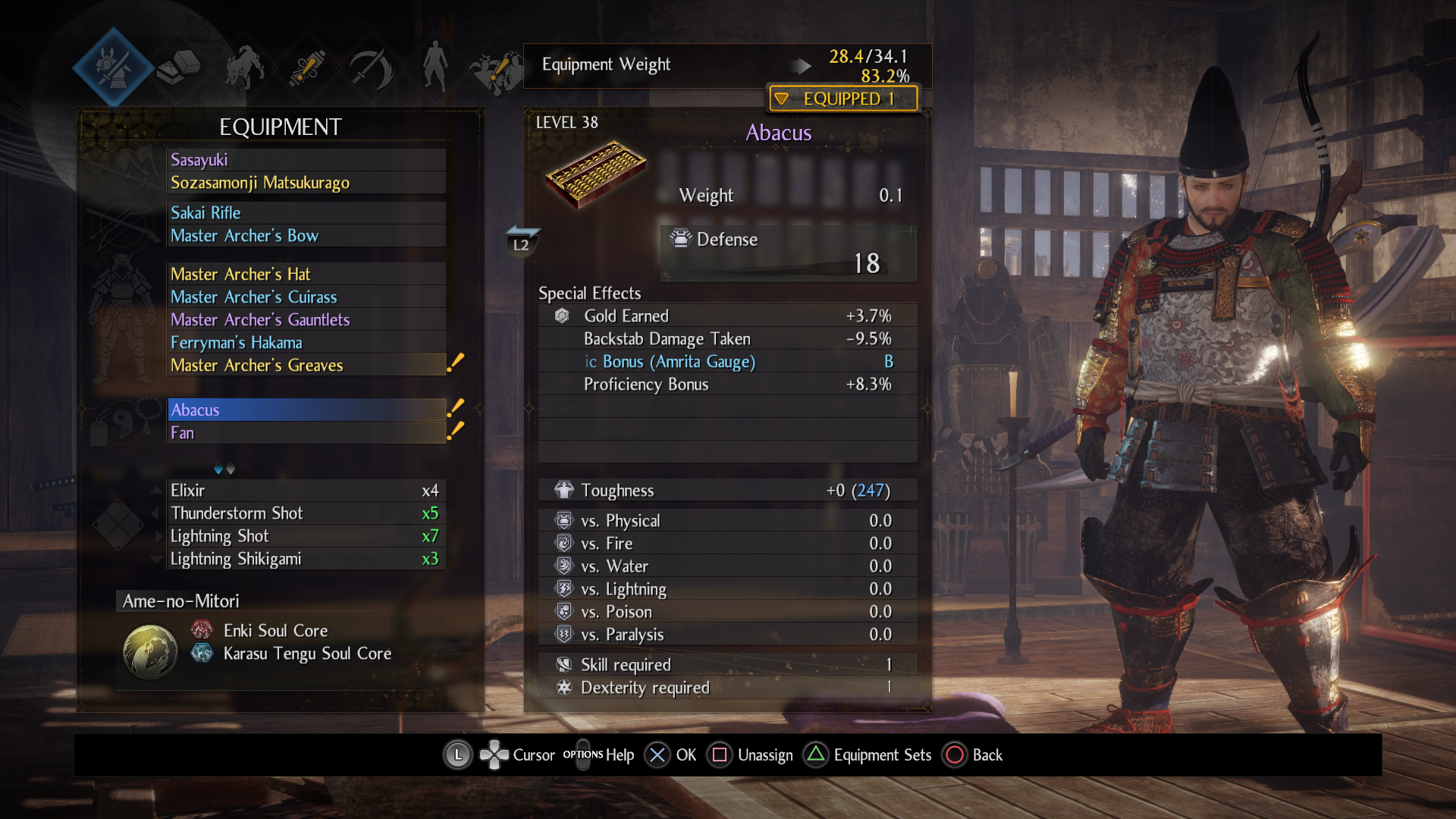 The way this Build works is that you usually begin by picking off enemies with your Bow, since you will have increased Bow Damage from the Golden Boy set. Having isolated the tougher Yokai enemy, you will hit it with Lightning Shot Talisman a time or two to set the Electrifed Status Effect. This slows the attacks and Movement Speed of the enemy and increases your Melee Damage by +20% against them, which is not a small amount. Then you move into melee when appropriate, and hack away until they die, ALWAYS remembering to Ki Pulse. This Build is extremely Ki hungry, and if you don’t Ki Pulse you’ll be dead pretty quickly.

The Golden Scythe uses three main Stats: Magic, Constitution and Skill. Magic increases your Onmyo Magic and Switchglaive Damage, Constitution increases your Health and damage with the Switchglaive, and Skill increases a variety of Stats along with your Switchglaive, Bow and Rifle Damage. Of these three Magic is the most important in order to maximize both your Switchglaive and Onmyo Magic Damage. Constitution and Skill are secondary, and you can manage these how you desire, but I prefer dumping most points into Constitution since this is a tanky Build and you will be getting hit. You will also need a modest amount of points into Stamina and Strength in order to meet the requirements for the Master Archer’s Armor, which is the Golden Boy Set, and becomes available around level 40. 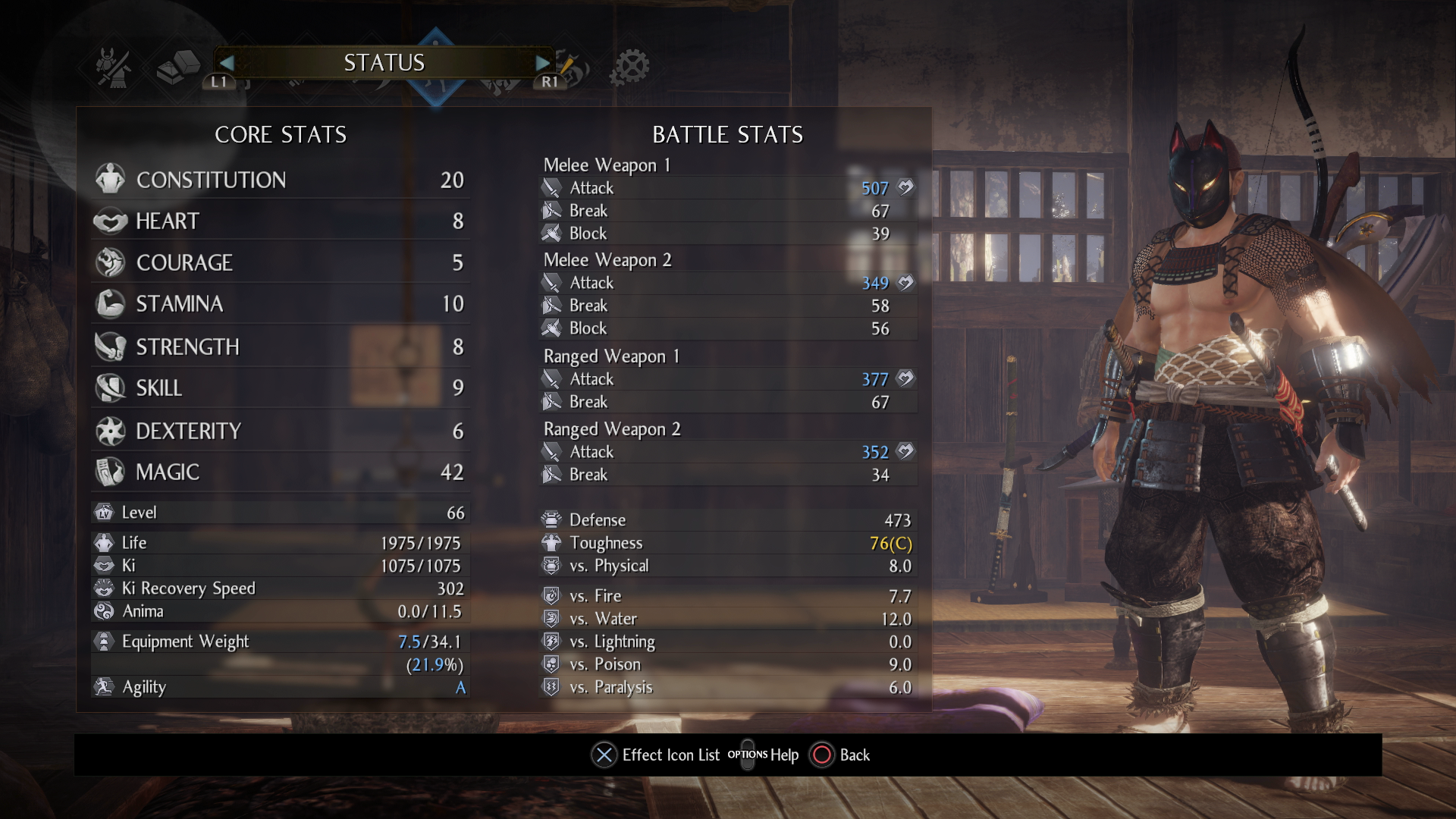 Because you will have a ton of points invested into Magic and Constitution it makes sense to use Weapons that scale off of these. I personally really like the Switchglaive for this Build, and that’s what I’m going to cover in this Build Guide, but you can also use Hatchets if you’d prefer. Switchglaive scales off of Magic, Constitution and Skill, so gains the most scaling from this sort of setup, and it has some trick moves that are really cool when executed properly.

When selecting a Scythe to use it’s important that you prioritize the damage on the weapon above all else. That means the passive Special Effects might be worse, but if your overall damage is higher you should use it anyway. Your second slot will be occupied by the Sozasamonji Matsukurago, which are dual swords that belong to the Golden Boy Set, and will count towards it even if in your second slot and not used.

Special Effects you want to look for on your Switchglaive are Imbue Lightning, Melee Ki Damage, Break, Block and any other bonuses that benefit all Stances. You will be swapping from Low, to Med, to High frequently so you want bonuses that will be effective regardless of Stance. Since you’ll be in Heavy Armor Block is very nice to have, since you will rely upon it often. 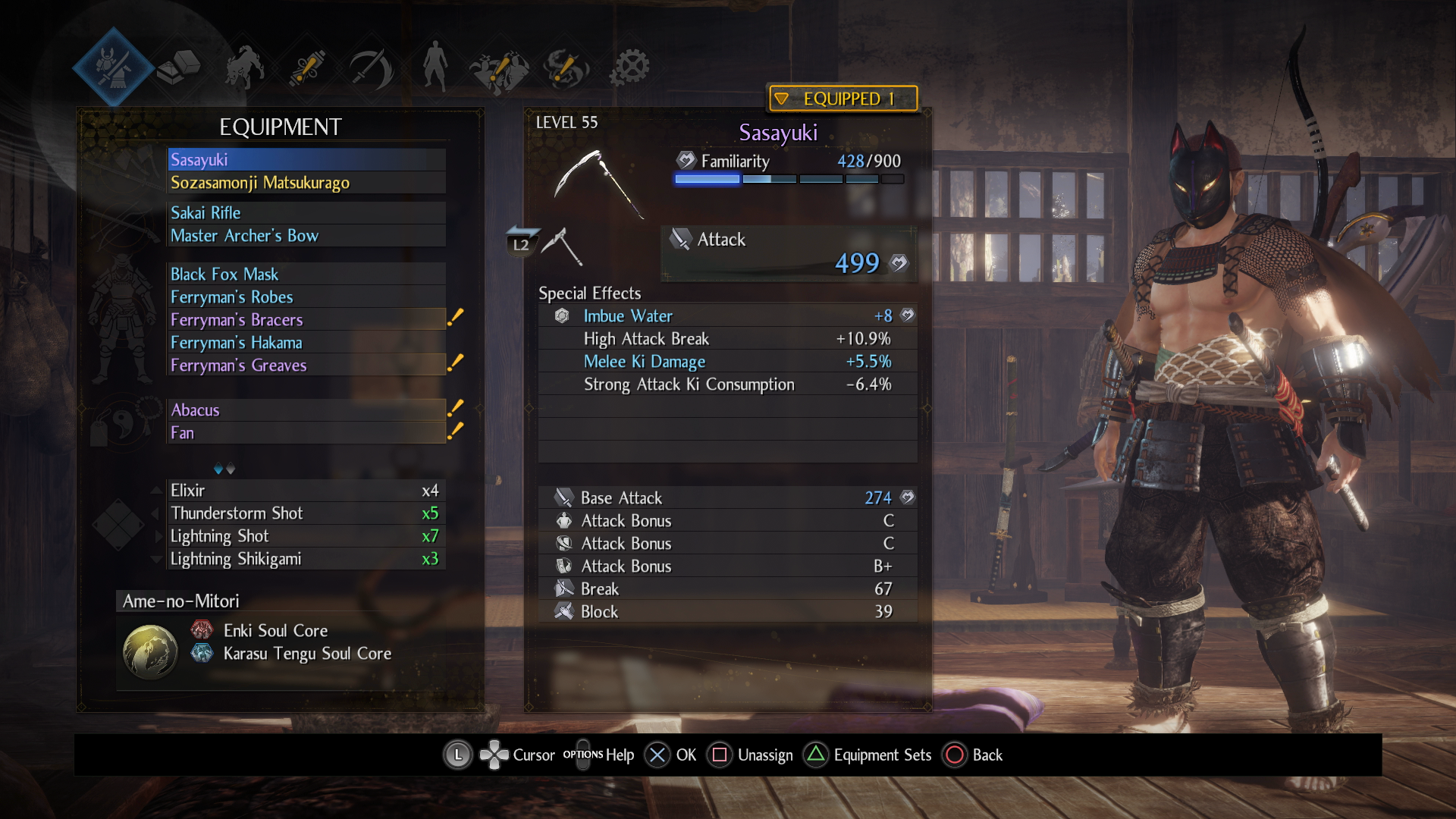 You’ll also want a Rifle and Bow to take advantage of both Ammo types you’ll find through out the game, and to be able to pick off more enemies at range. On these Weapons you just want to focus on things that maximize damage per shot such as Bullseye Bonus, Familiarity Bonus, Ranged Damage, etc. You won’t be using these once combat begins, so just assume all shots fired will be headshots.

We’re going to be using the Master Archer’s Armor for this Build, which contains the Golden Boy Set. This Set gives you bonuses to Bow Damage, Lightning Damage, reduces Damage Taken, gives you Life and increases your Melee Damage by +20% against enemies that are Electrified. This Armor Set is extremely heavy so you will have limited mobility, and you should learn instead to Block attacks as you will have exceptionally good Toughness allowing you to maintain high levels of Ki while Blocking. You want to aim for all 7 pieces if possible, which includes a Bow and Dual Swords. 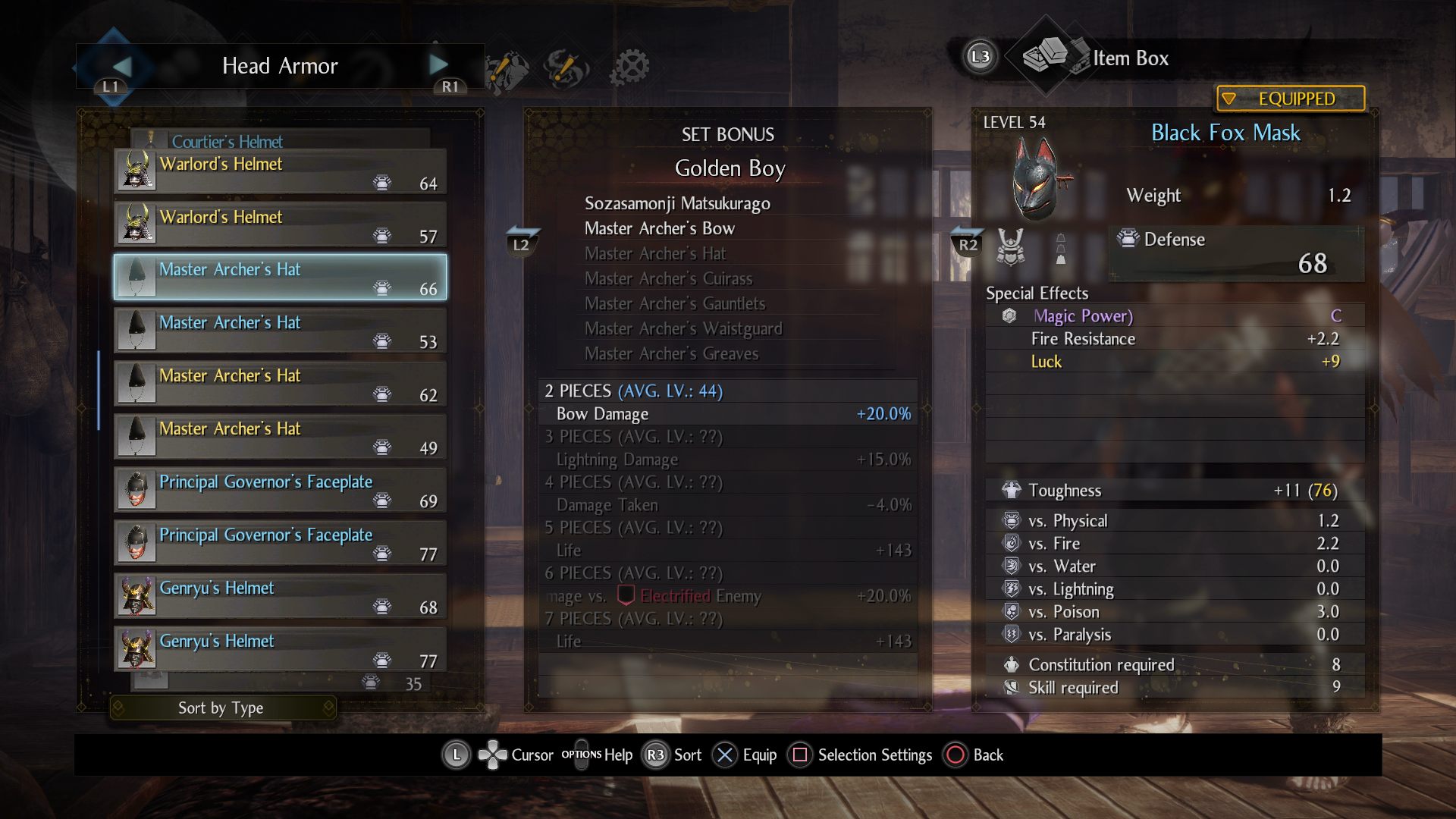 You want to look for Armor pieces that also have Onmyo Magic, Untouched Onmyo Magic, or other Special Effects that boost Onmyo Magic. This applies to the Armor that you will use until you gain this Armor Set, as well as this Armor Set specifically since it has random bonuses. This means you might want to farm it a bit to get the pieces with the best bonuses.

Accessories are a bit of a strange mix in Nioh 2, and you might find that you’ll use something you didn’t think you would, just because it’s available here and you rarely find the perfect Accessory. For instance, I am using Life Drain on Onmyo Magic Hit, allowing me to heal when casting spells, and Onmyo Magic Bonus when my Amrita Gauge is full. You never really know what you are going to get here, so look for things that increase your damage with Magic if possible, or just take the ones with the best bonuses.

Where to place your Skill Points is a vital part of making any Build in Nioh 2 work, and in this section we’ll take a look at the things you need to create the Golden Scythe Build. Since all Nioh 2 players use Samurai Skills, let’s begin there before we take a look at Switchglaive and Onmyo Magic Skills.

In the Samurai Skills tree you’ll mostly focusing on passives that benefit all Stances like Fortitude and Damage Boost: Constitution, but you’ll also want some passives from each part of the tree that buff you when you Ki Pulse in each Stance. You also want the Running Water Skills since you will sometimes not have time to Ki Pulse properly and Dodging instead if timed correctly will Ki Pulse for you. In short, you’ll spread Skills around here. 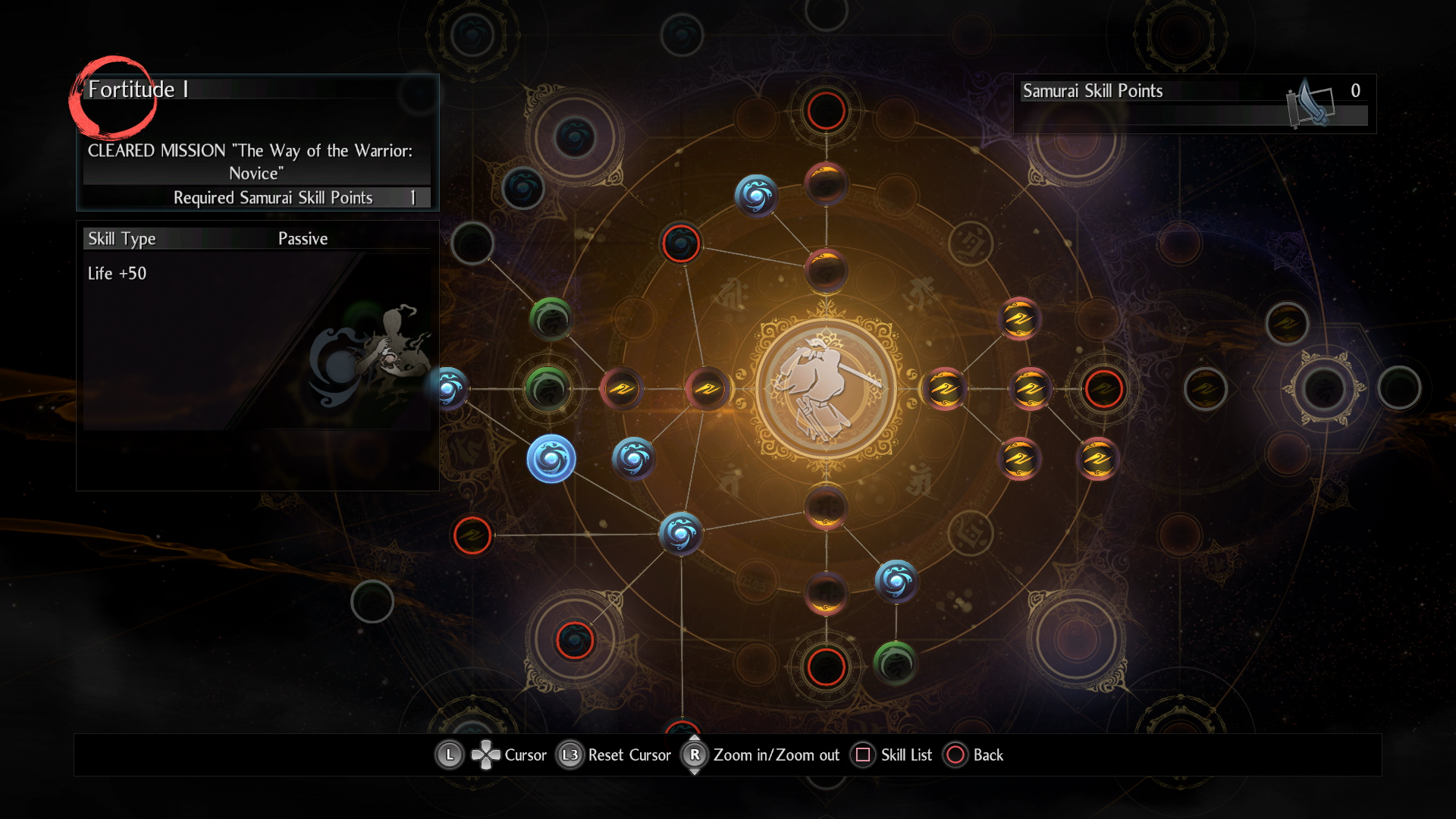 For Onmyo Skills you’re going to want to take Lightning and Lightning Shot Talismans and max them out to get the most uses possible. It’s not a bad idea to sped some points on Water Shot Talisman and Fire Shot Talisman as well to give you more projectile spells. Once you complete The Way of Onmyo: Adept you’ll gain access to Lightning Shikigami and Thunderstorm Talisman, which should both be maxed out. This should give you 4 Lightning spells total, with a few other ones as well. Incantation Mastery also helps with Onmyo Magic capacity if you need it. 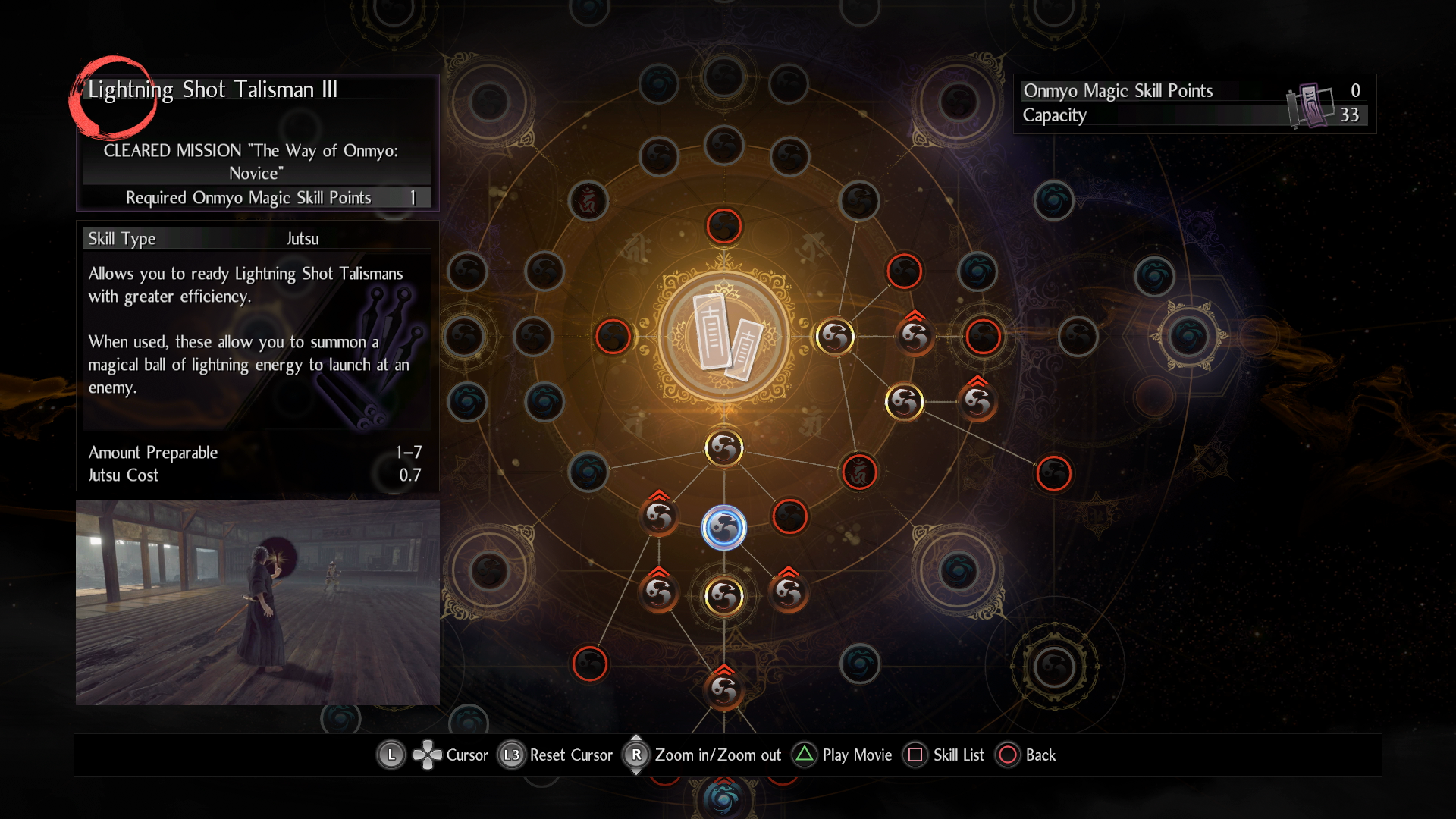 For Switchglaive you’ll be spreading your points around a bit. You definitely want Relentless because you need all the Ki you can get, and I especially like the Skills Divine Retribution The Path of Three. On the right-hand side of the tree are Skills that allow you to switch stances at the end of a combo and gain bonuses for doing so. This is a big part of the later gameplay so you’ll want to play around with these and get the hang of them. 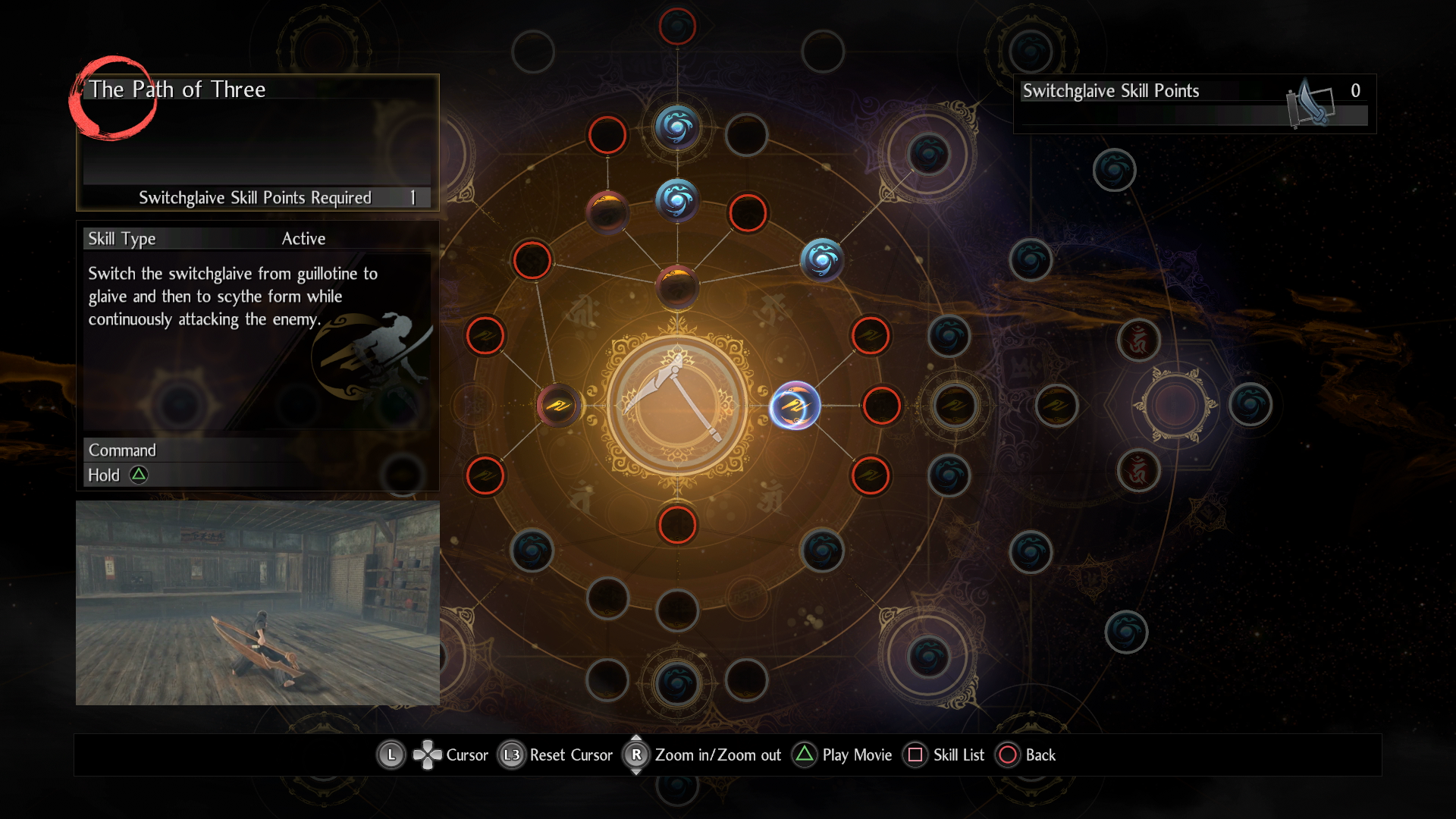 Guardian Spirits play a pretty large role with most builds, particularly when you are min/maxing. You should begin the game ideally with Ame-no-Mitori, and this Guardian Spirit increases your Lightning Damage by 20% and you should seek to unlock this as quickly as you can. Once you can equip two Guardian Spirits, consider making this your Secondary and making Usura-Hicho your primary for increased Water Damage if you find yourself using Water spells. Otherwise you don’t need to change, as there aren’t really any better Guardian Spirits early on in the game. 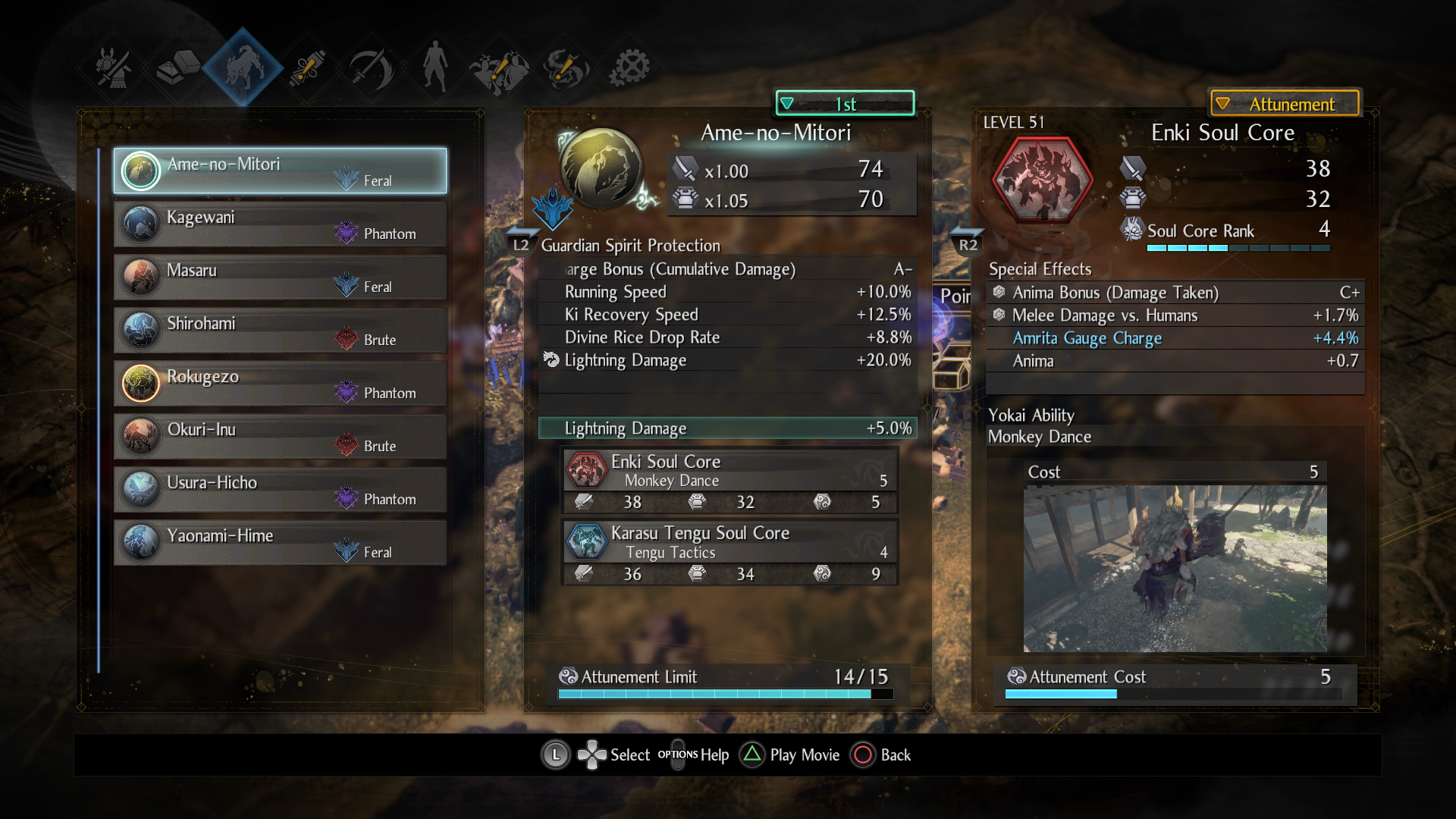 For Soul Cores you are better off focusing on ones that increase your Damage and have high attack. I like to use Enki for this reason, and if you can find one with some decent bonuses, all the better. Additionally, Karasu Tengu has decent Attack and Defense, and increases your Anima when using Onmyo Magic, which is great. If you can find one that gives you an Anima bonus when attacking Electrified enemies then that would be ideal.

There are a few good Clans to choose from for this Build and they are: Imagawa, Tachibana, Otomo, and Akechi. Imagawa will allow you to heal when dealing Lightning Damage, which you will do often with this Build which is great. Tachibana increases your Lightning Damage by 10% which isn’t bad. Otomo increases Attack and Defense with a Switchglaive by 20 which is also decent, and Akechi increases your Onmyo Magic by +40. All of these can work well in this Build, it just depends how you are geared an setup exactly, which tends to change slightly depending on where you are in the game. Choose the one that makes the most sense at the moment, and swap them if you don’t like it. 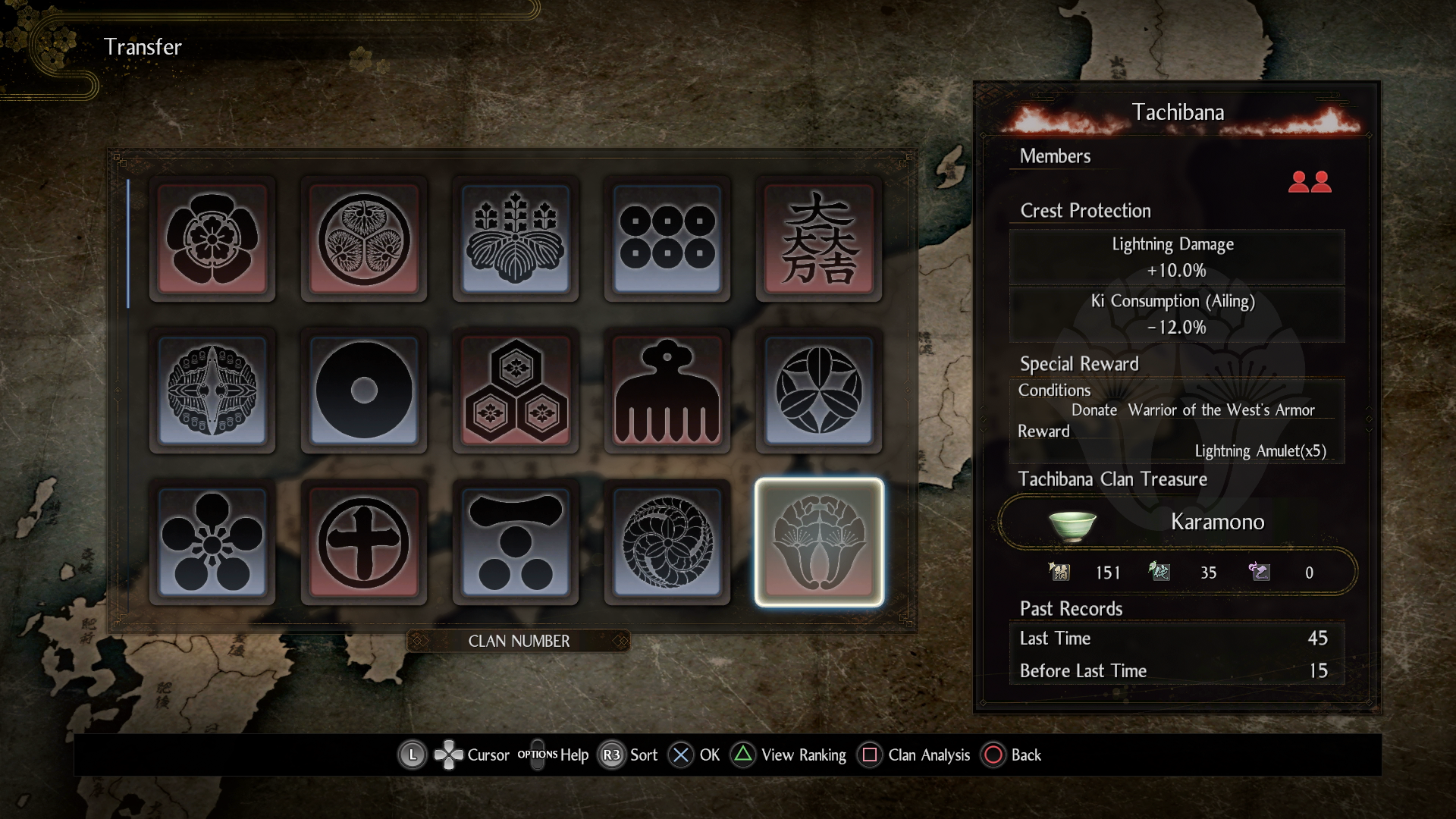 Use your Bow to pick off weak enemies, not your Lightning Shot Talisman. Save these Talismans for tougher Yokai in order to set the Electrified Status Effect at range so that you deal increased Damage in melee. Only use them in an emergency otherwise, where you would die due to being outnumbered, and you can’t easily pull out your Bow.

Arcana of Lightning in the Shifting Skill Tree imbues certain Active Skills with the Lightning element. You can customize your Skills in the Skill Customization menu by going to the one you want and pressing square. Here you can choose what bonuses to give your Skills. I have not tested all Switchglaive Skills with every bonus, but you can play around with these and see what you prefer. 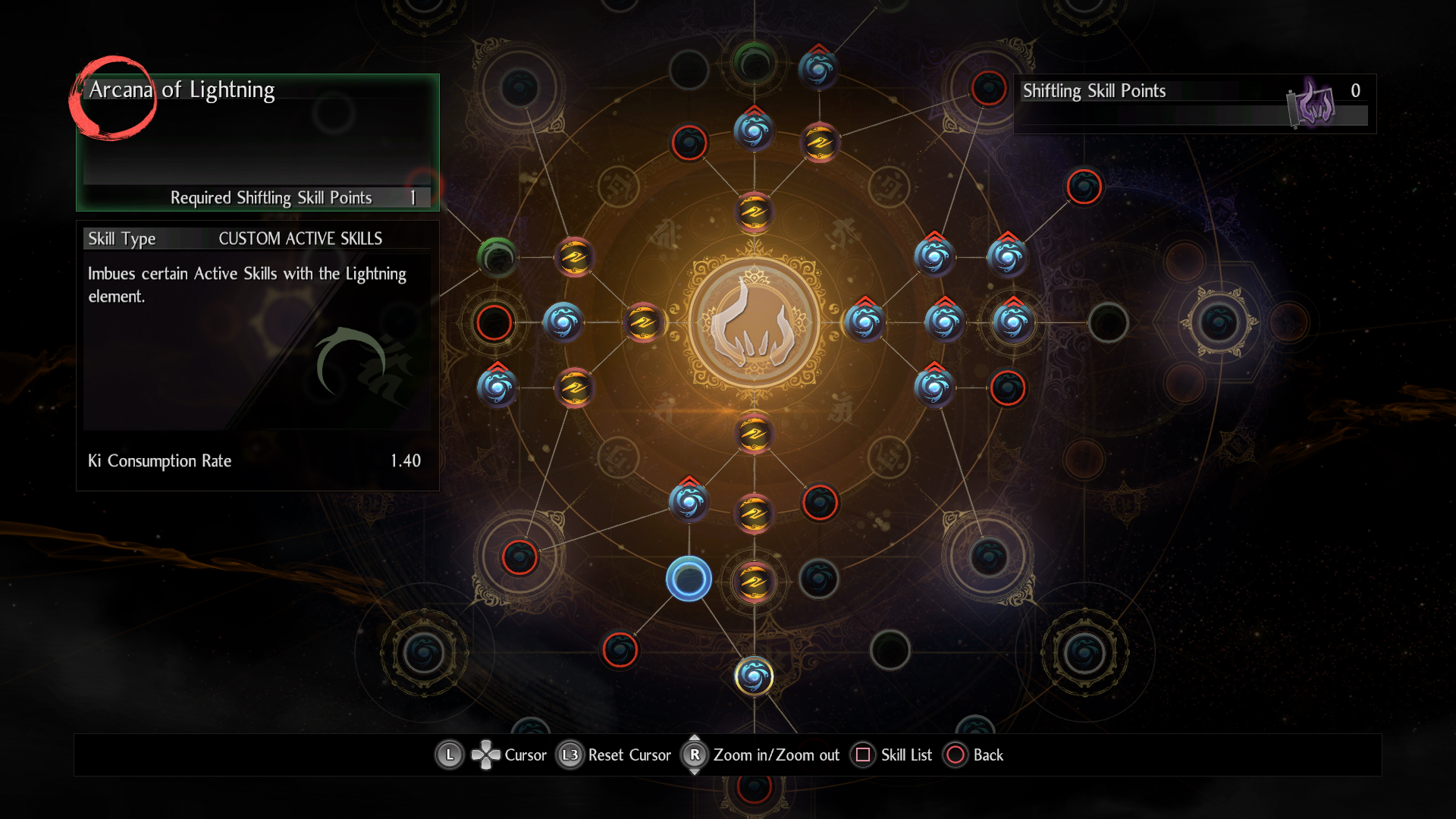 Thunderstorm Talisman works very well on larger enemies as it tends to hit them multiple times. It has a very limited range, however, so you have to be careful to use it when they are nearby, but not so close as to interrupt you or damage you. Learn when to use this, and when to use another spell instead so they are not wasted.

Lastly, it is not unusual for this Build to take damage often as you can swing through most attacks without staggering. It’s actually a valid strategy and sometimes it’s worth the trade off if you know you can stagger the enemy. Just don’t forget to heal, as you won’t usually feel the hit the same way you would if you were playing a Build with lighter Armor. Own the high Defense and use it to punish enemies!