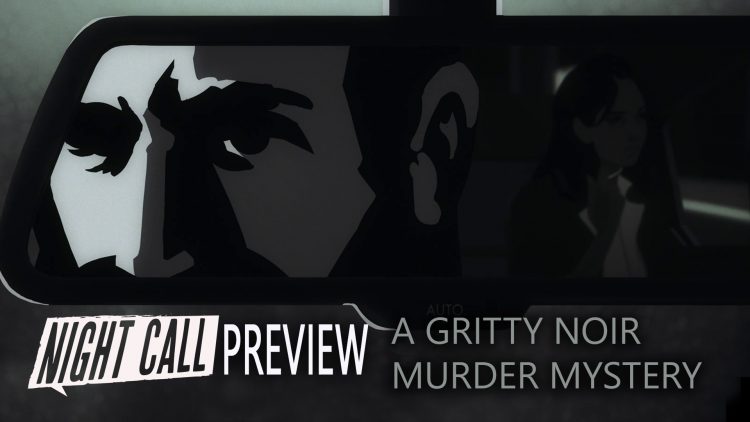 A dark past. Hidden Agendas. The cops want you to find a killer, the killer wants you dead. How will this story end? Will you be able to go back to being a simple taxi driver, or will you meet a different fate? Night Call is noir tale of a Paris taxi cab driver with a dark past that simply wants to start his life over. Fate, and more importantly the police, have other things in mind as you are the only survivor of a serial killer. Balance paying the bills with helping the cops find the killer, before the killer decides to finish what they started. The demo we were given is but a small taste of the full game, but what is there is more than enough to get fans of noir excited. So pour that cup of black coffee and get ready for a long night of detective work.

A quick note on the genre, as it is not the most common of genres out there, a Noir tale is a close relative of the hard-boiled detective story. It’s dark, gritty, realistic and often quite cynical, the main difference between noir and detective stories is that the protagonist is not a detective by trade, but forced by circumstances to become one. Night Call is a quintessential noir tale. You start off seemingly a simple taxi driver.  You go to investigate a sound after picking up a client, and the next thing you know, you’re waking up in a hospital. The serial killer stalking Paris struck your passenger, and you survived by luck. 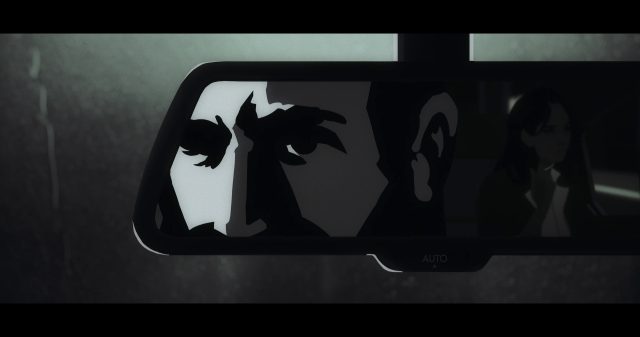 You’d love nothing more than to go back to quietly eeking by as a taxi driver, but the police have other ideas. They are desperate and they want an arrest. You’re the closest thing they have to a lead, and the cops have figured out your dark past. The deal is simple – help them, or they’ll let slip to the public who you really are. Then of course there’s also the thought that maybe the killer doesn’t like that there’s a lose end. Of course your assistance is all ‘unofficial’ and comes with no support, leaving you to figure out how to keep a roof over your head while trying to find someone who’s already tried to kill you once. 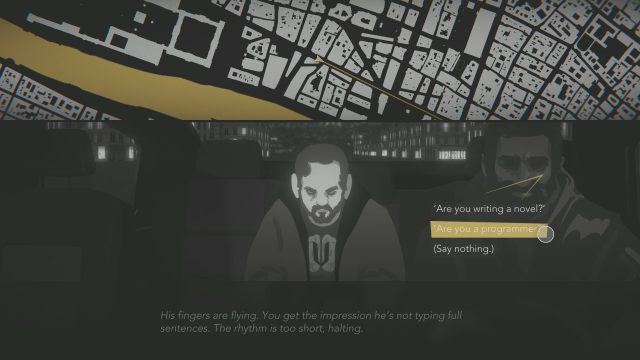 The demo only gave a small taste of the mechanics, but there’s a lot here that’s interesting. There’s also some points that are really aggravating, but hopefully those items can be tweaked a bit before the game launches. The core of the game revolves around the conversations (or lack thereof) you have with the passengers in your cab. For the most part you get three choices several times during the ride, and you need to figure out what to say. From the limited conversations I was able to play, this system works really well. I had little trouble figuring out what path to take to keep customers happy with you, which is rather important in getting good tips. 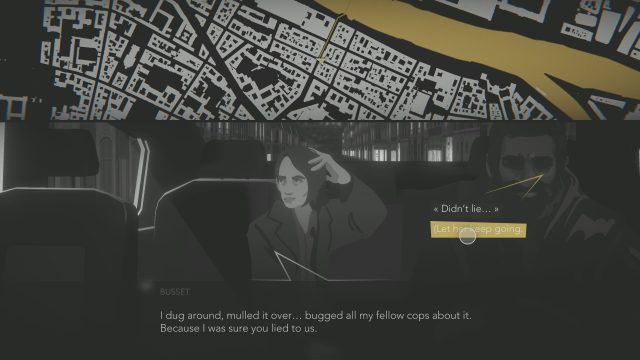 The demo barely touches on the investigation portion, but I imagine there will be times that you’ll need to get passengers angry in order to get them to reveal information. This of course will cut into your profits which leads to another major gameplay point – being a taxi driver. You get a very nice interface showing a map of Paris, the location of gas stations, where you are, and where potential clients are. You click on a point of interest, such as a client, and you automatically drive over.

Time does pass, but only when you are driving. From what I can tell, you can study the map at your leisure to decide where to go. Once you get to a client, you are told where they want to go. This will determine how far away it is, how long it will take and how much they will pay you. You can refuse (though in the context of the demo I can’t see why you would) or accept which triggers the aforementioned conversations. 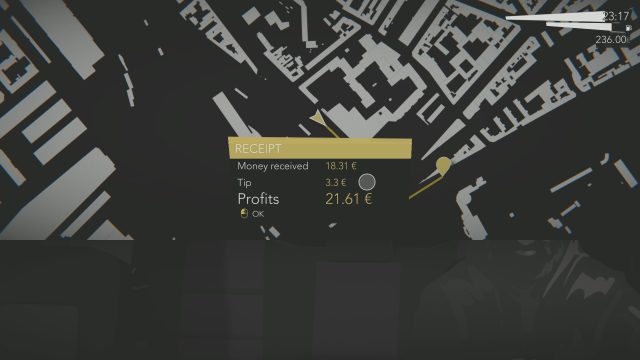 At the end of the trip you get paid the stated fair, plus a tip. From what I can tell, the tip is based on how much the passenger enjoyed your company, but I could be wrong on that. Once the passenger is gone, you can refer back to the map to choose your next action if there is enough time.

At a certain point you are forced to return home, though I’m not really sure when that point is. Perhaps I’m just missing the info in the HUD, but it came as a total surprise to me when it happened. It could be a limitation of the demo, since it always seems to happen after two passengers. Time will tell. Once you are done with passengers you get a report on your finances. 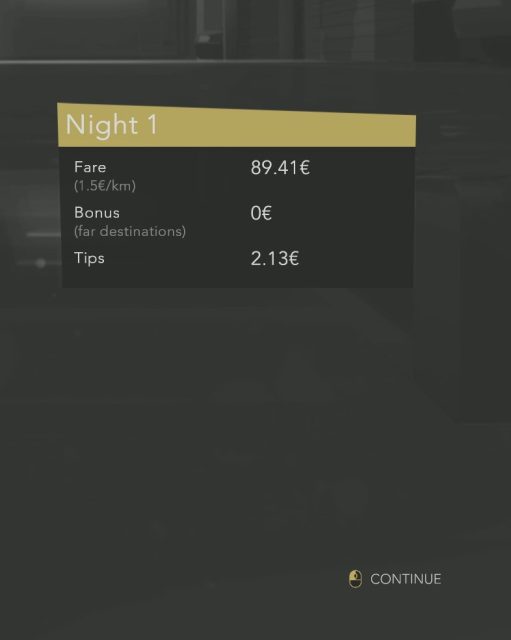 At first I was all “Yes!  I’m an awesome taxi driver!” 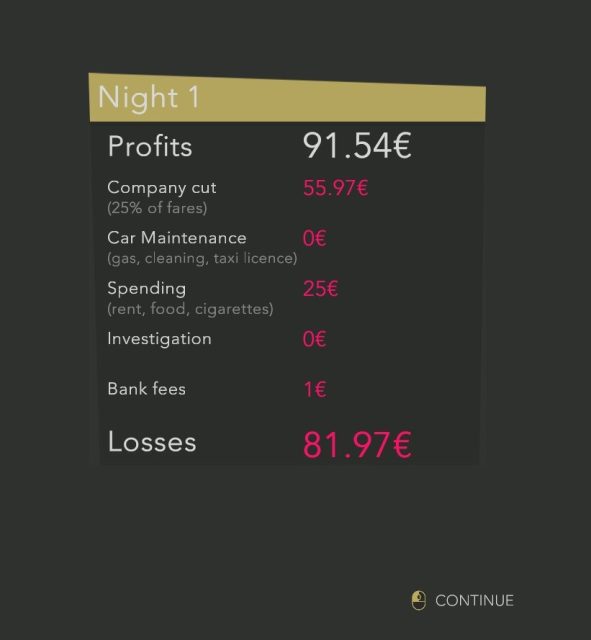 Then I got the next screen and I realised “Oh.  Oh dear, this is not going to be easy.”

I have to admit I was a little taken back by just how little money I was allowed to keep, especially my first (unfortunately unrecorded, darn you technical gremlins!) play-through. While I understand that this is a noir game, which means hard circumstances and harder choices, it did feel a little punishing to see so much of the fare go poof. I was left with little time to wallow in my grief, for the next major mechanic came into play – detective work.

While I feel I got a very good feel for how the taxi cab part will work, I feel a little less certain about the detective work. A single night is not enough time to get a good feel for it but for what was shown, was relatively straight forward. 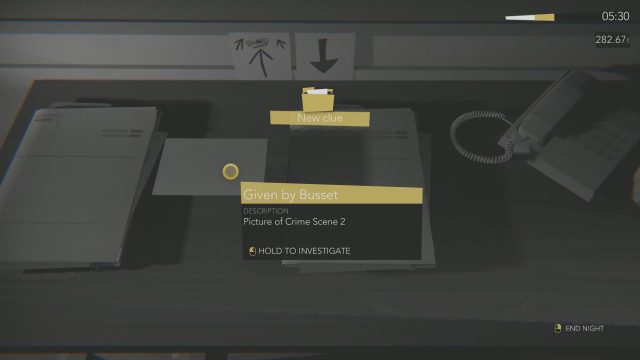 There’s folder and pictures that you can spend time reviewing, doing so apparently unlocks new investigation areas and places new clues on the board. Once you run out of time, that’s it, you go to bed and the next day starts. 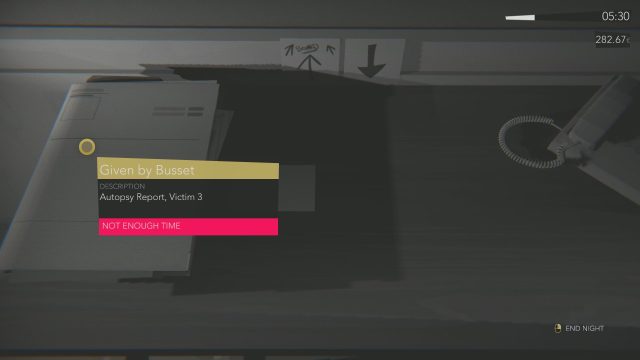 Now how important is sleep? I have no idea. The dialog you get when switching to your apartment seems to suggest that sleep is important, and that you might not want to investigate until the game forces you to stop, but I just don’t know. Once you complete the first night, the demo ends. This is something the final game must do a better job of conveying to the player. If there’s a cost to staying up too late that’s fine, but this needs to be clearly communicated to the player. I’m OK with there not being a penalty because time is already a limited resource that must be spent well, but the uncertainty bugs me. 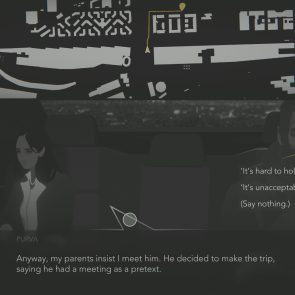 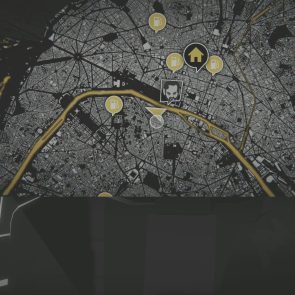 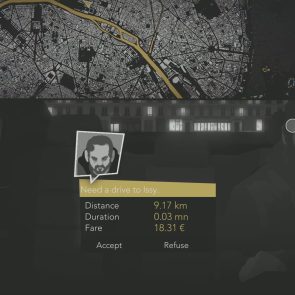 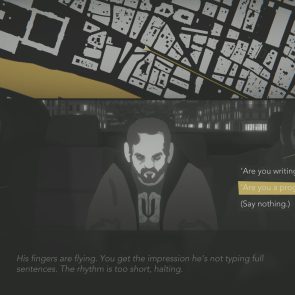 This uncertainty also applies a bit to the taxi portion as well. How much is gas? How much will this route really cost me? Are the fares different or fixed based on time and distance? I hope the devs add a bit more in the way of mechanics information to the game before launch. It’s never good game design if players feel compelled to read a wiki for basic mechanics.

With such a tiny taste of the full game, it’s difficult to draw broad conclusions on it. I do know one thing for certain, and that is when this game launches I will be there day one playing it. I’m not a die-hard mystery fan by any stretch of the imagination, but I do enjoy a good whodunit. This looks like it will have a good story, interesting characters to analyze, random elements (murderer won’t be the same every time) and it has a pitch-perfect aesthetic. Based on this demo I’d say if you have any interest at all in detective stories or mysteries, then you need to place this game on your wish list.

If you enjoyed story-driven titles with a detective element you should check out next The Darkside Detective Review: Occult Fun For All Ages and for a darker horror narrative Call Of Cthulhu Review – A Tumultuous Tentacle Experience.