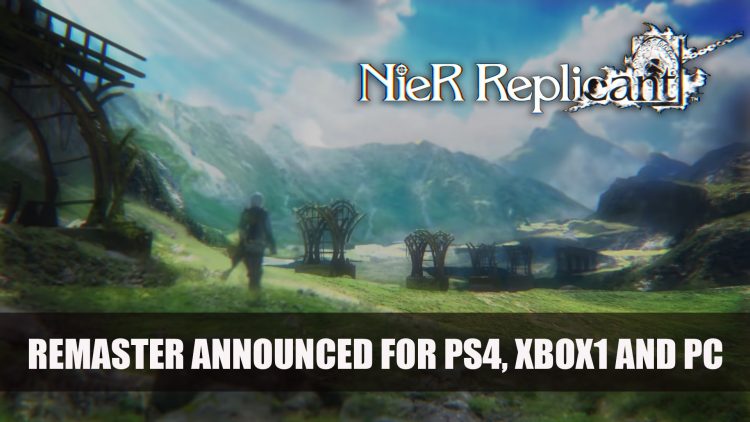 Square Enix and ToyLogic have revealed a remaster for NieR Replicant is coming to consoles and PC.

NieR Replicant Remaster Announced For PS4, Xbox One and PC

NieR Replicant originally released in Japan on PS3 almost a decade ago, and it seems the NieR 10th year anniversary of the franchise was a good a time as any to reveal that a remaster is underway. The Action-RPG will be coming to Playstation 4, Xbox One and PC via Steam. The developer has also released a teaser titled “NieR Replicant ver.1.22474487139…”

Official video description:
NieR Replicant ver.1.22474487139… invites players into a dark, apocalyptic world as they join a brother’s captivating quest to cure his sister of a deadly disease – a quest which will in turn make them question everything.

The remaster is being developed by Toylogic alongside Square Enix as well as NieR series developer Platinum Games. As for what this remaster holds for Replicant, according to pcgamer, Square Enix producer Yusuke Saito describes it as a “version up” opposed to a remake or remaster. The new version is set to include fully voiced lines, new content, new music compositions by the original composer Keiichi Okabe and the possibility of a new ending.

Upon release, NieR Replicant didn’t quite get a popular response from critics but since has gained a cult following, especially after NieR Automata.

Speaking of NieR Automata, the Become As Gods Edition which includes all DLC content, will be joining Xbox Game Pass for Xbox One on April 3rd.

To all YoRHa units in possession of an #Xbox – #NieR:Automata BECOME AS GODS Edition will be coming to #Xbox Game Pass on April 2nd! pic.twitter.com/1jFktu6pdb

You check out the teaser trailer for NieR Replicant below:

NieR Replicant remaster will release on PS4, Xbox One and PC via Steam no release date has been announced as of yet. In the meantime if you’re picking up NieR Automata be sure to check out our wiki.

For more news be sure to read next Mount & Blade II: Bannerlord Early Access Launches One Day Early and Fallout 76 Wastelanders Expansion Delayed To April 14th.

One comment on “NieR Replicant Remaster Announced For PS4, Xbox One and PC”