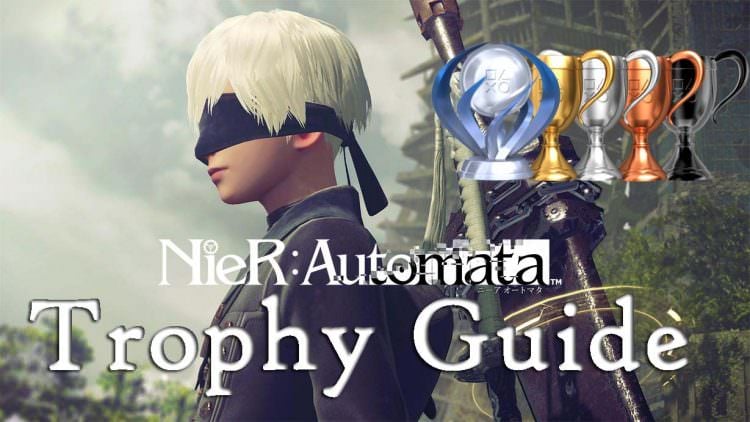 The Nier: Automata trophy and achievement guide will help you with all the tips and strategies you need to earn 100% of the game’s trophies/achievements. The Platinum trophy for this game is nowhere nearly as difficult as the Nier: Gestalt/Replicant one, but it still requires some time commitment.

Stare into space from the Bunker. Unmissable Story: Reboot

We Await Your Next Visit

Ruler of the Deep

Those Who Love Humans

Leaving for the New World

Achieve A2’s ending. Third Playthrough: Choose A2 for final battle in To the Top Floor

The Minds That Emerged

The Circle of Death

Have your body collected. Collect your own body after you die.

Have 100 bodies collected. Play online. When you see dead player YoRHa units, pray for them and then “Retrieve”

Complete your first quest. Complete any one Side Quest

80% of all quests completed. Complete most Side Quests: here is a full list, with rewards

Destruction is My Job

80% of all unit data unlocked. Find most Enemies and NPC data. Here are lists on where to find them. Each enemy type may have several variances so follow the list closely.

80% of all plug-in chips collected. Here’s a list of Plug-in Chips

All Pod programs obtained. Here’s a list of all Pod Programs

Tools of the Trade

Any weapon upgraded to the highest level. To do this, you will need to unlock Masamune, and take any weapon to Level 4 at his shop in the Forest Zone.

All weapons upgraded to the highest level. Here is a list of all Weapons. To upgrade them, you will have to use several materials and lots of G. This also unlocks a secret boss.

All Pods upgraded to the highest level. Collect All Pods and then upgrade them at the Maintenance Shop. You will need several difficult-to-find Materials.

Fighting’s Not My Thing

Play your first hacking game. During your second playthrough, press and hold triangle to hack an enemy.

The Power of Hate

50 machine lifeforms destroyed with berserk mode. Activate Berserk Mode (L3 and R3) on your third playthrough as A2, and destroy machines while in it. Equip health regenerating chips to counter the damage. Easy to unlock in highly populated areas such as the Desert Housing where you initially fought Adam.

Ruler of the Skies

255 enemies destroyed using a flight unit. Simply destroy as many enemies as you can each flight section you are given. Should unlock towards end of first playthrough.

Materials gathered at a hidden harvest point 10 times. Equip the Pod Program A170: Scanner, and hold down L1 as you walk around in any zone. Listen for the sound to become more frequent, and follow the direction of the increased beeps until you reveal an item. Do this 10 times.

All Pods found. Here’s a list of All Pods.

At least 100,000 G in possession. Easier than it sounds, simply manage your G by not purchasing much and selling useless plug-in chips and valuables. Machine Cores are of exceptional value.

Any animal ridden for 5 kilometers. Use the Sachet or animal bait to get near Boars and Moose and press Circle to get on them. Then simply ride around from one zone to the next.

A Round by the Pond

20 different kinds of fish caught. Here’s a list of all the fish you can collect, and how to fish.

10 friendly machine lifeforms destroyed. After you unlock Chapter Select, go to Pascal’s Village and kill the peaceful machines there. Don’t save after it unlocks if you don’t want their oil on your hands.

What Are You Doing?

2B’s secret discovered 10 times. Use the camera to peek up 2B’s skirt and see her panties. She will swap the camera away when you do it right. Perform this creepy act 10 times.

Not That I Mind…

1 hour played with 9S in a certain state. During your third playthrough, wait around before going to fix 9S at the Resistance Camp during the quest Recover NFCS

Emil’s shop used for the first time. After completing the Forest Zone, check for Emil’s mask on the map, he’s usually near the Desert: Camp area. You should shoot at him once to make him stop running around, then talk to him to access his shop.

Emil destroyed. You will need to finish Emil’s Memories sidequest, and be warned it’s a very high-level battle. Here’s a full description of how to access it and how to defeat Emil.

All endings achieved. There are 26 endings for the game, that can be saved one over another. Do this on your third playthrough by using chapter select and our Endings Guide.

The place of memories has been visited. Complete Emil’s Memories and use the Elevator Key at the commercial facility to unlock a Nier easter egg. 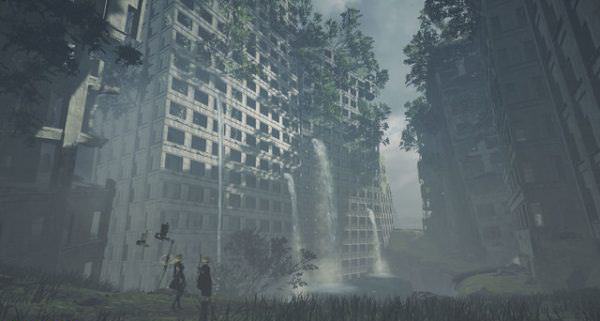 Hope this helps! Nier: Automata is a wonderful game full of hidden secrets to explore and discover. Share your trophy tips in the comments and keep checking back with us for great guides and more!