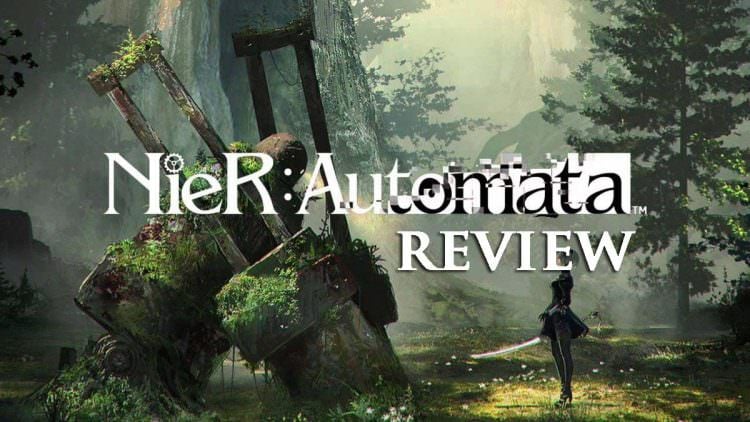 Nier Automata is a spiritual sequel to the obscure but beloved PS3 & Xbox 360 title Nier from all the way back in 2010. Being a quirky Japanese game, the original failed to captivate “the mainstream” and received underwhelming reviews from gaming outlets, scoring a low 68 on Metacritic vs a fan score of 8.5. The original game did, however, acquire a cult-following, with several blogs and small websites popping up to discuss the meanings and ideas behind the game. I played the original title with love, and my main question going into this iteration was: can this really surpass or come near a game that surprised me like no other by actually deleting ALL of my save data during the ending? Only full completion could tell!

Most people are likely unfamiliar with the creative talent of Yoko Taro, but he is known for creating dark, unusual tales that challenge conventions and dwell in concepts such as the self, awareness, will, and death. Nier: Automata is no exception, and whilst the games welcomes you in with an action-packed sequence fully showcasing Platinum Game’s development capabilities, it soon moves on to set the stage for a wonderful RPG experience.

The story is set in a distant future, over 10,000 AD, and follows YoRHa androids 2B and 9S, as they complete missions assigned to them by their commander officer from orbit, in a journey to reclaim earth from an army of machines so that the humans remaining on the moon can return to their planet. The machines were created by an invading Alien force, but the aliens themselves have not been seen in hundreds of years. 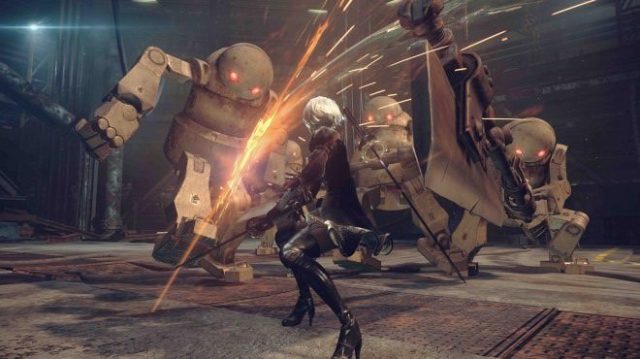 Androids, who are created in model classes for “attacker”, “operator”, “scanner”, etc look almost human with their synthetic skin and blood – and they can even eat. Despite their similarities to humans, they are told the mission is everything and that they should not have emotions, but they seem to develop feelings all the same. 2B and 9S face the challenge of developing a friendship or not, and making decisions based on morality or orders. 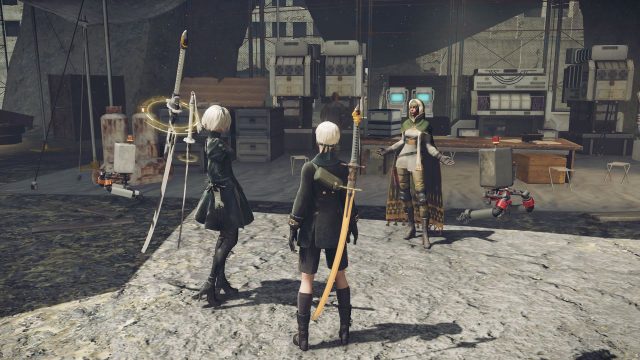 This would seem like the familiar morality choices of some Bioware games, but they are shown through the lens of a machine developed with a mission and programmed for a purpose, and versus other machines who share the same qualities. What makes androids and machines different? What makes humans different? Who is aware? How are they aware? What is death for a machine, when it can be backed-up and rebooted on a new body? This new twist of existentialism sets the scene where players encounter villages of androids with needs, quests, companionship and rage – all to the tune of a master assignment that unfolds over several story arcs, featuring a mind-boggling 26 possible endings. 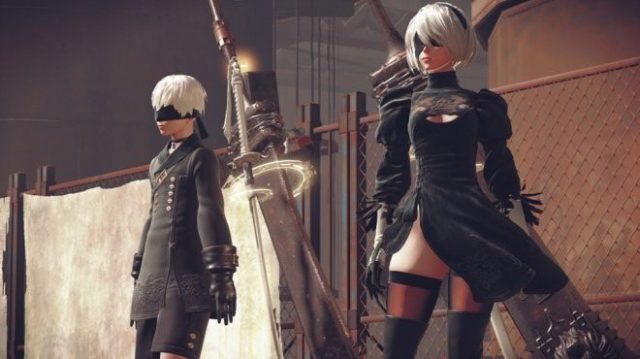 Players may believe that Nier: Automata is all about the combat, given it’s “action” tag and its intense demo. But they would be wrong: Nier’s true brilliance is in the execution of its narrative, with decisions impacting outcomes and actions, and questions to your choices that surpass the “meta” by showing you events through different characters and eventually challenging your decisions through the very ending credits.

Nier: Automata does not have state of the art graphics, although it is pleasant to look at. Several sections of the game move to a top-down or sidescroll view, and facial animations are underwhelming and lack the high-end production values of AAA titles. The menu screens, item collections, and enemy designs are simplistic and somewhat repetitive.

However, whatever it is missing in the visual department, it makes up two-fold in a truly magnificent soundtrack. Without exaggeration, this is possibly some of the best in-game music I have ever heard, and not because the music itself is magnificent, but because it matches the atmosphere and sets the mood perfectly. The music took me back to playing a PS2 classic, walked me through some Galaga and side-scroller memories, nudged at my suppressed yearning for the original Nier by idling me in town, and crescendoed its way to make me care about both enemies and NPCs alike. 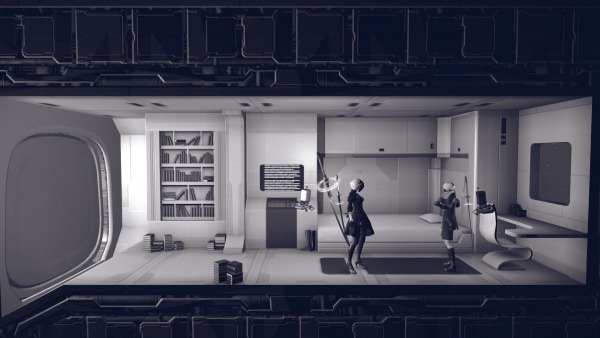 Level design is quite varied, with distinctive areas and some inter-connectivity, changing environments for quest completion, and no shortage of secret locations, paths and objects. It is a shame that the graphics themselves are not more detailed, for this would would have come more alive from it, but this is likely to be expected from a title that is focused on keeping a constant framerate and doesn’t have the budget for cosmetics. It was likely spent on audio and voice acting, which both deliver in every expectation I could have had. 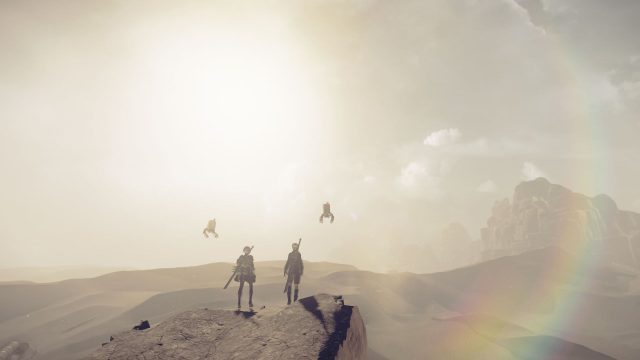 Nier: Automata gameplay is an adventure in different styles of gaming. Castielle was sitting by me as I played the demo and his comment was “You have to be good at five different kinds of games to be good at this!”. He was very right. The game welcomes you in with a thrilling flight through a ruined city’s skies, taking on enemies as a scrolling shooter and adding in some epic mecha transformations. You are then taken to a side-scrolling platforming section, and then to full 3D action combat, until you finally come to a decisive goliath-scale battle that involves manipulating the enormous broken arm of a gigantic enemy and then beating him with it. All of this happens in the prologue, in the space of 10 minutes, and it sets the stage for what you can expect from your adventure. 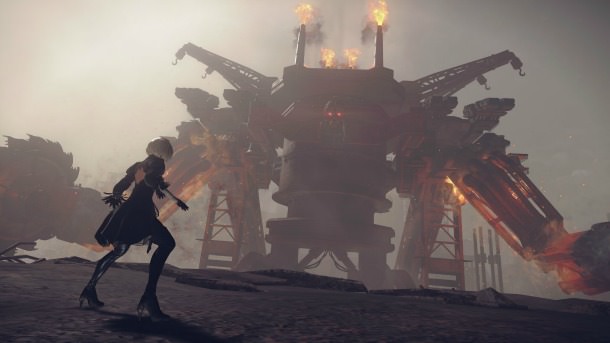 The controls are remarkably intuitive considering how many genres have been mashed into one and how often the camera switches from player-controlled to top-down and fixed side. I didn’t have any troubles finding my way around during combat, and the execution of combat felt satisfying in both graphics and “feel” – I felt powerful, agile and deadly. There are several secret techniques, such as rubbing the central pad to increase Pod affinity, that are not explained and one must discover through random luck – but this just added to the charm rather than annoyed me.

Combat is fluid, precise and relentless. There’s a unique mix of ranged and melee attacks plus evade dodges that give you the opportunity to get in “the zone” and approach boss battles as a carefully executed, beautiful dance. Platinum Games is a master of action games, and delivers with a variety of customization options so that players may find the right tune to join this ballet. Weapon class selections, with different movesets, that can be upgraded and swapped on the fly, combat enhancement consumables, character customization plug-in chips that determine all sorts of elements from increasing item drops to slowing time around projectiles or increasing your weapon damage. Then there are the pod programs, and their charged attacks, and your partner android who can be customized to be aggressive, passive, ranged, melee or anything in between. Difficulty settings allow for players who are not proficient in action games to enjoy the story and combat by giving features such as auto-aim, whilst also allowing those playing on normal or above to face the challenge and “grind and come back later” of traditional JRPGs. 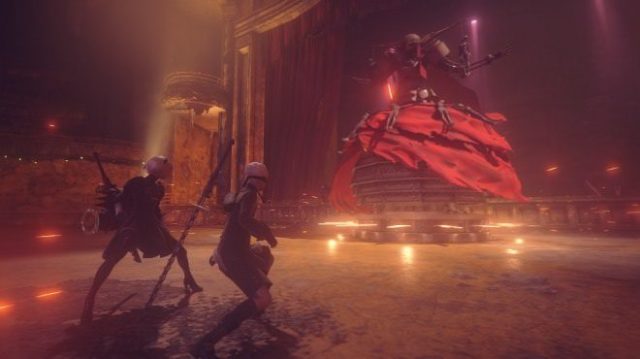 If all of that is not enough, you will find new abilities and approaches by unlocking new playable characters over the course of the three playthroughs needed to obtain the “real ending”. Hacking mini-games, fishing, flight simulation, and even remote-control of enemy machines flesh out the gameplay. It all adds up to a unique, satisfying combat experience that provided the right amount of excitement while allowing me to enjoy the story and exploration aspects of the game in a well-balanced ebb-and-flow. 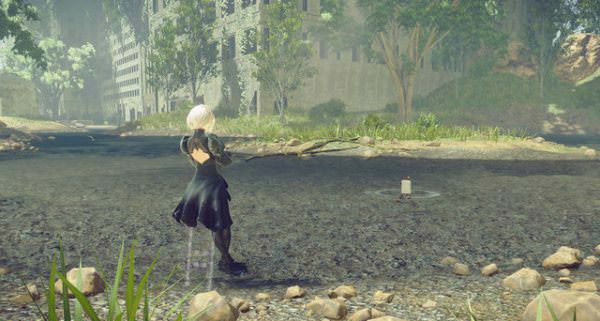 Of note: the game has been patched a few times since release, currently sitting at version 1.05 – before these updates, I experienced several crashes and some escort quests that got stuck without progress. It was rather frustrating and taught me to save often. I recommend everyone learns from this! Since 1.05 I have only had one crash and I was on the PS dashboard so I am unsure if it was the game.

Nier: Automata does not have co-op or pvp, but it does have asynchronous features that allow you to interact with the corpses of other players. Without an auto-save and with only 3 save slots, the game demands that you manually save whenever you are near an “Access Point” and your data can be backed up to the cloud. When you die, the game’s Reliquary System provides a new body for your data, and you must make it back to your old body to recover your experience since last save and any chips you were using (in before someone says this makes it a souls clone!). 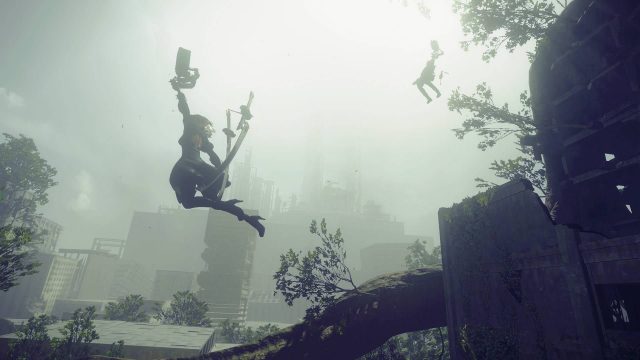 Adding in the asynchronous twist, you leave a message and your body behind when you die for other players to find, and they may pray for you and heal you, obtain your gear in their worlds, and repair your broken body to have as a helper to their work. This means that if you are playing online you may find corpses of other players mid-battle, and be able to heal yourself and summon the body of that player to help you with the boss at that very moment.

Reading the messages of other players can be endearing, but it was at the very end of my third playthrough that I found total satisfaction with the way this asynchronous co-op experience was implemented. You’ll understand when you get there!

For replayability, the game is lacking in expansive environments we’re used to in modern gaming. With games like Witcher and Skyrim setting the bar, the locations provided felt adequate but somewhat limiting. Thankfully, a teleport feature is given after a certain point in the story, making travel for side quest completion swift, and allowing for the subsequent playthroughs with your unlocked character a bit less tedious. I have finished the game three times but I still haven’t caught all the fish, figured out if there are some secret quests, or worked out how to open some locked doors with a mystery machine that apologizes to me. I have the platinum, and the wiki is 80% complete, but I want to go back and do more, explore more, discover more. 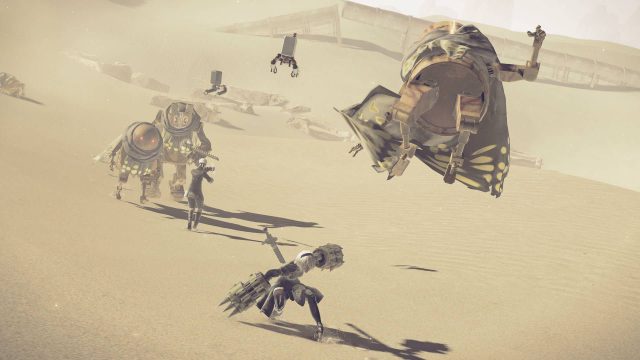 8.7
Summary: An engaging, action-packed and even relaxing exploration of existentialism. Nier: Automata merges action and RPG as seamlessly as it switches cameras angles from player-controlled to fixed scroller. Have your pick of reading a visual novel and threading the plot together, or hack and slash through waves of enemies in a gorgeous dance - I did them all, and I loved every minute. Worth full price.
Story & Setting (9.5)
Design, Visual & Audio (7.5)
Gameplay (9)
Online & Replayability (8.5)
Pricepoint (9)