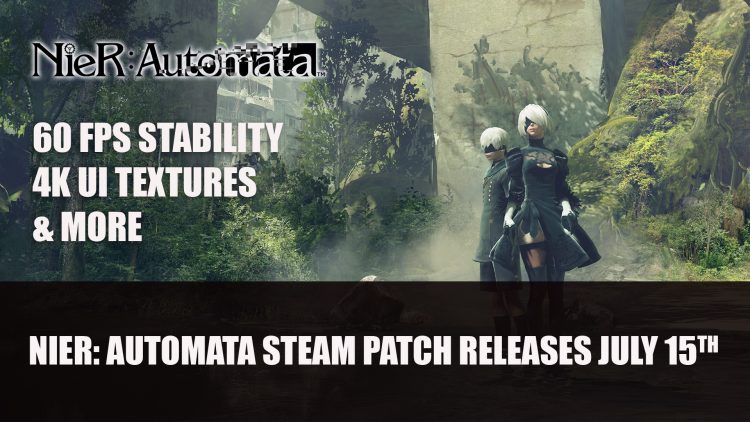 It’s been four years since the release of Nier Automata on Steam but it’s finally getting improvements on the platform via a new patch arriving this week.

It was back in April when a patch was first announced by Platinum for the PC Steam version of NieR Automata, set to improve the version on the platform. Previously the version available through the Microsoft Store and Xbox Game Pass also received a patch, but the Steam version still awaited some need fixes to performance and frame rate issues. But the light at the end of tunnel is almost here as Steam patch arrives on July 15th, this Thursday.

The #NieR:Automata Steam patch is coming July 15th at 9am PDT / 6pm CEST, implementing the below changes:

The Steam version currently experiences a number of issues which has been only solved up until this point with third party mods to help the current state. Now an official patch is underway which should smooth out the uneven performance in places.

The patch notes have been released and can be found below. These includes improvements to anit-aliasing, UI textures (4K), cut scenes, borderless video settings and more. It will also get rid of the pesky cursor that just pops up when using a game pad controller which in the past also needed a mod to help. The frame rate will also be stabilised at 60FPS.

NieR Automata also reached a new milestone in June, surpassing six million units in shipments and digital sales. If you have checked out the RPG before, you should definitely give it a go, as there are multiple endings and plenty of content which hopefully now runs a little smoother on Steam.

You can also now play the upgraded version of NieR Replicant Ver.1.22474487139… which launched earlier this year on Playstation 4, Xbox One and PC which is the prequel of sorts to NieR Automata, completing the curious tale.

NieR: Automata is available now for PlayStation 4, Xbox One, and PC via Steam and the Microsoft Store.