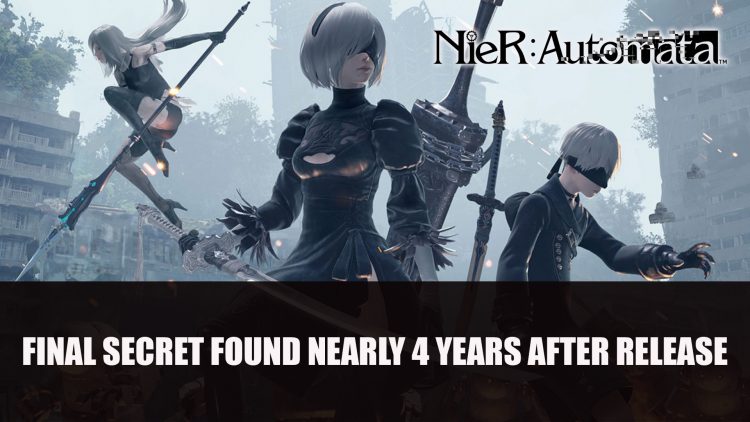 The final secret has been uncovered for the Action-RPG NieR: Automata roughly four years after it launched.

The last enigma has been discovered for the Action-RPG NieR: Automata which was announced by developer Yoko Taro on Twitter recently. Uncovered by data miner and content creator Lance McDonald (yes the same Dark Souls dataminer who has discovered cut bosses from the likes of Bloodborne such as the Snake Ball Boss and more). McDonald tweeted out his findings which was shortly confirmed by the yokotaro twitter account. Fans who don’t want spoilers may not want to see the short clip:

The final secret unveiled is actually a cheat code which allows players to apply it after killing the first boss. The cheat code instead of a code consisting of numbers/letters is actually a sequence of attacks, rolls, and moves, which kind of plays homage to the classic cheat formula games have used in the past. All moves must be pulled off while standing in a specific spot in order to be activated. Once performed successfully, it will allow the players to be instantly transported to the “last” of the endings, unlocking bonus game modes. McDonald also says he’ll be releasing a full video which will explain exactly how this works.

This cheat is not a hack or exploit but something actually written into the game. As to how Lance McDonald unearthed this secret, he shared it was due to “hundreds of hours of reverse engineering.” That is some dedication, but I’m sure many fans will be appreciative of this finding, as you can unlock endings without going through the entire game. While I don’t suggest using this code the first time you play as it is well worth playing through, it could be useful for those who’ve played it through to get the main endings.

What do you think of this cheat code? Will be using it to unlock endings? Let us know in the comments below.

Recently NieR: Automata surpassed a massive 5 million in copies sold, since it’s launch back in 2017. The next NieR game to release is the remaster or upgraded, NieR Replicant 1.22474487139 which serves as a prequel to Automata, launching on April 24th 2021.

For a round up of RPG news find it here in Top RPG News Of The Week: January 3rd (Babylon’s Fall, NieR Automata And More!).