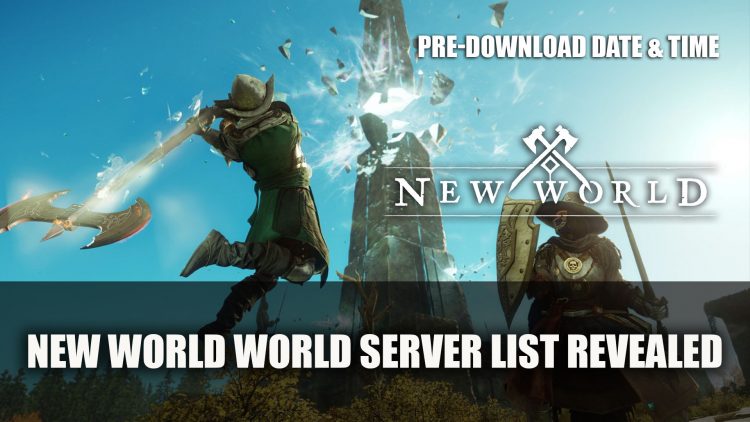 Amazon Game Studios has unveiled the big list of world servers for New World which releases next week.

The MMORPG New World will be launching next week on PC, and the developer Amazon Games has revealed the server lists dependent on region. There are over 170 different servers under North Ameria, North America West, Central Europe, South America and Australia.

This list will hopefully get you and your friends prepared for which servers you want to play on. There are quite a few under each region, so there is plenty of choice. There are also language recommended servers as well.

🧭 Coordinate with your friends to #playnewworld on the same world for the official launch!

In other news, you can begin pre-downloading the launch client on September 27th at 8AM PT/11 AM ET. So if you want to get your game installed before the servers go live, be sure to get that done.

You can get yourself ready to #playnewworld by pre-downloading the launch client starting 9/27 at 8 AM PT (11 AM ET)!

RT and tag your fellow Adventurers!!

If you want to know what went down in the Open Beta be sure to check out what changes were implemented in our New World Open Beta Release Notes Includes Perk Adjustments, PVP Scaling, Bug Fixes And More.

Want to know what we thought of the game? Check out our New World Preview: Closed Beta Impressions.

New World will release on PC on September 28th. If you’re looking for all things New World be sure to drop by our New World wiki for all the latest.

For more news find it here in Genshin Impact Inazuma OST Now On Spotify Apple Music And Youtube and Neo: The World Ends With You For PC Launches September 28th.